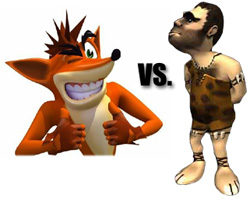 Ever since that little Italian plumber jumped in a squat racing vehicle on the Super Nintendo back in 1992, gamers have been obsessed with kart racing.  And with good reason.  Dispensing with any particular realism (Gran Turismo 5, this is not) and focusing only on fun, the kart racer is a pleasant way to white-knuckle it across the finish line. 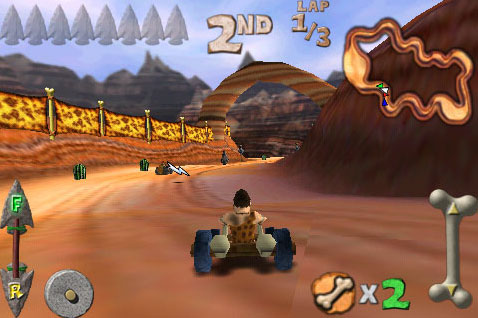 There is no comparison here.  Cro-Mag Rally (Cro-Mag) has extemely atmospheric, stereo sound effects that give a whole new dimension to the gameplay.  What’s more, the soundtrack is superb both fidelity and in content–I wish I had the tracks in my iTunes playlist.  On the other hand, Crash Bandicoot Nitro Kart 3D (Crash) features much more bland sound effects and a fairly generic soundtrack (reminiscent of something one might hear on the Nintendo 64), both of which appear to be mono.  Cro-Mag‘s quality audio is surely the main reason that it is an 8x larger install than Crash.  The clear win is Cro-Mag on audio.

I feel that Cro-Mag has the superior render quality and higher in-game framerate of the two titles.  And while both titles have various animated on-track obstacles (sliding walls, bouncing crates, wandering zombies, etc.), Cro-Mag‘s feel more solidly implemented. Also, while the kart in Crash is solidly fixed to the center of the display, Cro-Mag offers a little more “play" to the cart’s fix point, making the latter feel a little more natural, somehow.  In the visuals department, Cro-Mag wins.

Cro-Mag‘s tracks feel more like a series of connected open areas as opposed to typical, narrow tracks.  This gives the game less of an on-rails feel, as the player can meander here and there about the terrain.  And while this adds variation to each turn about the track, it makes the game feel somewhat less focused as a racer.

Crash‘s tracks are more in-line with what one might expect from a kart racer.  No valleys to explore here.  And while the player indeed feels more fenced in as a result, it does give the game a more fast-paced, breakneck feel.  Crash‘s track design comes out on top. 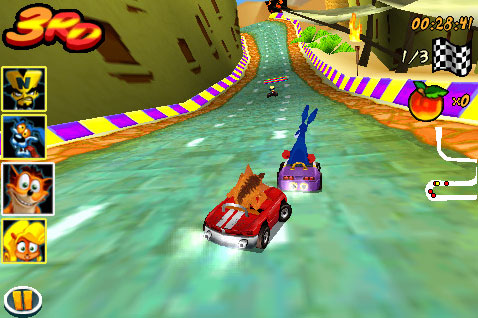 Cro-Mag features a Race mode and a Gather mode.  In the Race mode, the player is pitted against three other randomly-chosen opponents and is challenged to beat them across the finish line.  At the player’s disposal are various weapons and powerups that can be collected along the way, as well as obstacles to avoid (twisters, wandering mummies, etc).  Gather mode is still a race to the finish, but adds the requirement of collecting arrowheads along the way.  All tracks and vehicles are available from the start.

Crash offers a Cup mode, a Story mode, and a Time Trial mode.  Cup mode is the core racing mode where the player chooses from among three different cups of increasing difficulty, each consisting of four tracks.  A trophy is awarded based on overall performance at the end of each cup’s series of four tracks.  Only the first cup is available at start, the other two must be unlocked based on success in the preceding cup.  The player is pitted against five other racers in each race.

In Story mode, the player is made to complete various objectives along the way–collect more Wumpas than the opponent, for example.  This can be fun, and I find it to be more of a valuable addition than was Cro-Mag‘s Gather mode.  The Time Trial mode is self explanatory.

I find Crash to offer the more solid and engaging gameplay of the two.

In both titles, driving control is achieved by tilting the iPhone left and right, and both have settings to adjust tilt sensitivity.  Cro-Mag offers a forward / reverse accelerator that is held with the left thumb during play, along with a break button.  Crash features constant, full-speed-ahead acceleration and a jump control that doubles (if held down) to enable drifting on corners.  I was surprised to find no issue with the glued-to-the-floor accelerator in Crash–it works fine. Overall, I feel the control contest is a wash–control is fine on both games.

This video provides a side-by-side comparison of the two games:

AND, THE WINNER IS…

In the above areas of comparison, the games are tied.  But, of course, a game is much more than the sum of its parts.  And as such, despite the lovelier renderings of Cro-Mag Rally, I feel that Crash Bandicoot Nitro Kart 3D is the title that offers more engaging gameplay and more replay value in the long run.  They are both fine titles that are definitely worth a few megabytes on any gamer’s iPhone, but if you’re a one-kart-racer type of person, then Crash is the way to go.