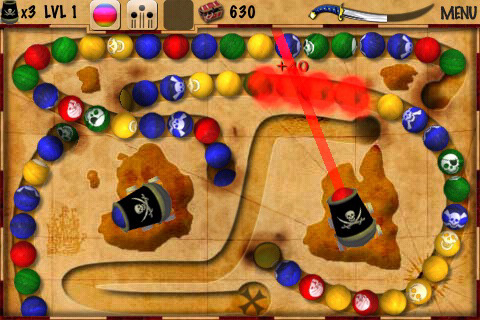 Even though we see a lot of new games each day, we try not to dismiss a game as “just another xyz" too quickly. Still, with the number of iPhone games coming out daily, it can be hard to keep an open mind.

Blackbeard’s Assault, however, is a good example of a game that deserves a serious look, despite presenting a relatively well known formula. The game is a variant of the circular “match-three-of-a-kind" puzzlers that Hudson (Puzzloop) claims to have invented. Blackbeard’s Assault, however, takes this formula a step further with multiple cannons and power-ups which adds a faster pace to the game.

The gameplay video shows off the level of polish found in the app. (YouTube version of the video also available.)