David Frampton of Majic Jungle Software, author of the forthcoming Chopper for iPhone, gave us the heads up that he has released a Mac OS X-based emulator that renders a 3D iPhone with Chopper running on the screen so that gamers can fly before they buy. 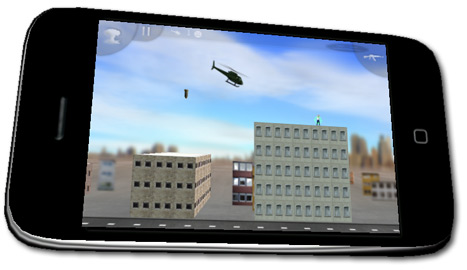 Controls are simple: the arrow keys control the tilt of the iPhone along both axes, the space-bar fires the cannon, and the ‘d’ key drops bombs.

As this is just a demo, it features only the first eight levels of the game locked at the easiest difficulty setting.  Also, saving and high scores are not available.  The Chopper demo requires Mac OS X 10.5 and can, for a limited time, be downloaded from Majic Jungle’s iPhone page.

Chopper for the iPhone and iPod touch will retail for $7.99 through the iTunes App Store.