Following its debut back in 2019 on Nintendo Switch and PC, Baba Is You has slowly become one of my favourite puzzle games of all time alongside The Witness. Many indie games debut on PC and sometimes consoles before they come to mobile and I gave up on Baba Is You ever hitting mobile considering I didn’t really see any discussion of more ports and figured we would see PS4 and Xbox versions before anything on mobile. After last week’s surprise release, Baba Is You ($6.99) from Hempuli is now on iOS and Android in addition to PC and Nintendo Switch platforms and this new port is just about everything I hoped for in a mobile conversion but it is lacking in one key area.

If you’ve never played Baba Is You before and enjoy unique puzzle games, let me save you some time and just tell you to buy it right now. You will not regret it. Baba Is You has you controlling Baba (this changes in some levels) and your aim is to reach the goal. This varies with each level introducing more rules. The rules are usually interactive blocks you can move around to change up the rules and reach the conclusion which is to win. Baba Is You is all about bending rules, making more rules, experimenting, and reaching the goal. The way new rules, mechanics, and puzzles are introduced within levels is where you will see Baba Is You’s brilliance.

This ranges from you moving rocks to reach the goal in the beginning to crazy things like changing the rules up so you move as all the walls in a level to hit the flag which is the goal. You do all of this by getting into some logic and programming rules that you have control over and the freedom here is what makes Baba Is You so special. Expect to get stuck very often but sticking with a puzzle and coming back to it is a very rewarding experience. When I initially played it on Nintendo Switch, a lot of my experience took me back to when I first played The Witness. Baba Is You is a game that will make you really think.

The freedom to solve puzzles also extends to how you progress. Each area has a set of puzzles and you need to clear a fixed number (but not all) to reach the next one. You do however benefit from clearing every level in a single area. The open nature of Baba Is You is great because you can always come back to a previous level you couldn’t solve before to try and reach the goal. 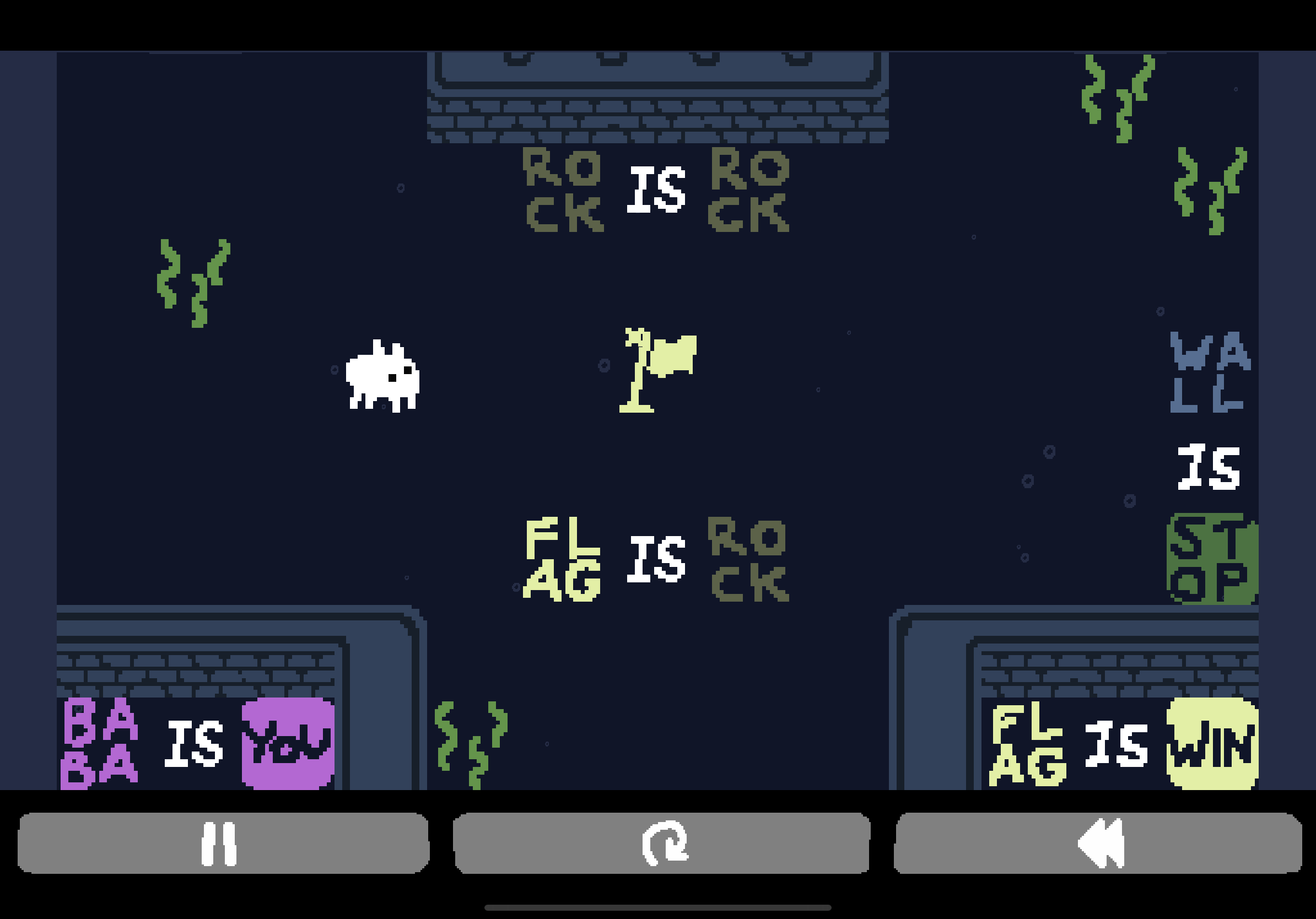 Baba Is You isn’t a complex game when it comes to controls. You mainly need to move in one of four directions, rewind, pass time without moving, and access basic menus. On iOS, you can swipe to move and swipe and hold to keep moving. Tapping and holding will let you pass time while tapping with two fingers (and holding with two fingers) lets you rewind. The pause, restart, and rewind buttons are on the left of the gameplay on iPhone and on the bottom on iPad giving you easy access regardless of your device.

Visually, Baba Is you is simple but memorable. The icons for various objects and the tiles for the environment are all well designed. There are also some nice little animations that you can disable if you’d prefer a more static aesthetic. Baba Is You’s soundtrack perfectly fits the visuals and even listening to a few of the songs now through the Steam soundtrack DLC takes me back to when I first got stuck on these levels on Nintendo Switch. 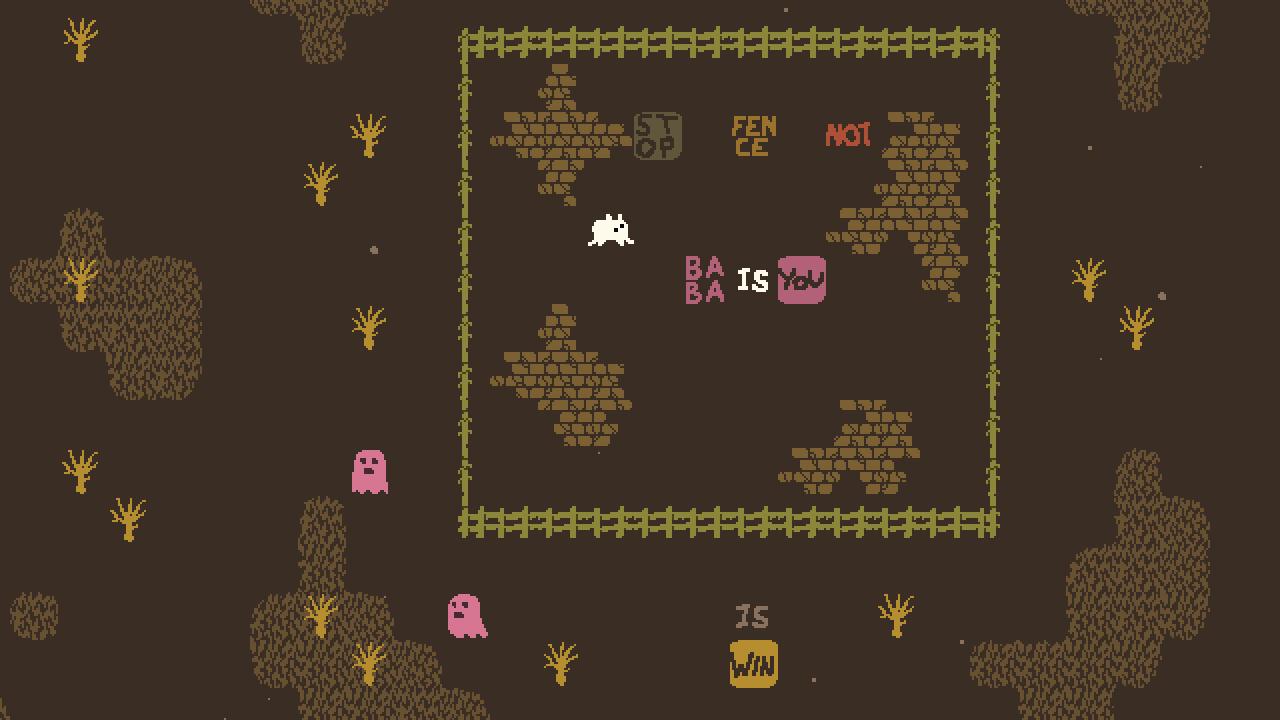 As with every port to iOS, I try and test different control options. Baba Is You has controller support and keyboard support for gameplay. I used my PS5 DualSense controller and Xbox Series X controller here. The former has some issues with it not being detected properly but it is usable once you get into a level. The Xbox Series X controller worked better but there seems to be a bug with using a controller in some menus right now. This doesn’t affect the actual gameplay in levels though. If you have a bluetooth keyboard, you can use the arrow keys or WASD to move while you can use P to pause and delete to rewind. I ended up enjoying using a combination of keyboard and touch controls when playing on iPad while I stuck to touch controls on iPhone in the time I’ve been playing Baba Is You.

This brings me to my biggest complaint with Baba Is You on iOS right now: the lack of iCloud save sync. Being able to play on iPad at home and resume the level on my iPhone would’ve been perfect. It does seem like this is being considered for a future update though. One other thing I’d love to see is the ability to save in the middle of a level as a suspend save like option.

Baba Is You is absolutely essential on iOS. The game itself was already amazing and I’m glad the iOS conversion is nearly perfect. While my two problems with it will not be an issue for everyone, I’m hoping future updates bring iCloud save sync and the ability to create a suspend save in the middle of a level. I already thought Baba Is You was sold for too little at its Nintendo Switch and PC asking price so having it at half of that on mobile feels like even bigger of a steal. It is pretty crazy to me that two of my favourite puzzle games of all time, Baba Is You and The Witness are finally now also playable on my phone (and iPad). Having Baba Is You on Nintendo Switch ready for me to boot up as a break between other games was always great but having it ready to instantly load up anytime on my phone is even better.