After a long wait, Forager from HopFrog and Humble Games finally hit mobile this month by way of an iOS port done by BlitWorks, bringing the crafting survival idle hybrid experience that players on PC and consoles have been enjoying for a while now. BlitWorks does fantastic ports to consoles and I had high expectations for Forager on iOS going in once I learned that the port was done by them. I initially played Forager on both PC and Nintendo Switch and had fun despite the lack of updates on Nintendo Switch initially when I put in close to 60 hours across both platforms. When Forager finally hit Xbox One, a major update hit Switch and PS4 bringing it up to speed with PC, but that update was and still is buggy.

The iOS version seems to be based on that build going by version number. This means iOS is at content parity with consoles including the Nuclear Update. Forager has a lot of gameplay systems working together to create an experience that might either feel perfect (as it does for me) or too convoluted for you. It has exploration, crafting, gathering, simulation, combat, dungeons, idle game mechanics, fishing, and a lot more. You can see the influence from the likes of The Legend of Zelda and even Terraria here.

You initially start on a small island with just a pickaxe. Your aim at the beginning is to gather what you see and slowly start crafting structures as more resources spawn. The opening minutes of Forager are a bit dull but they go a long way in making sure you get used to the routine of ensuring you’ve eaten, understand how to gather, and how to build basic structures. Even upgrading your equipment takes a long time. As you keep doing this, you will be able to buy new land. What’s great about Forager is that the RNG aspect of resources and enemies, along with the ability to buy land as you please and unlock different skill paths, will ensure you don’t have a similar experience in your next run or save file.

The game drastically changes depending on which skills you unlock, but you will reach a point where the game does feel like everything is automated to the point where you mostly just move around as your pets and companions or structures do everything for you. At this point there’s almost too much happening on the screen at once and it’s a visual overload in a good way. This is also where the performance will vary as it does on consoles.

Forager has a very charming aesthetic and this carries over to everything in the game like the interface, design of structures, enemies, and items. It initially may look simple but the developers have nailed the visual style here. Given how much you hear some of the songs in Forager, it is great that the score from Hernan Marandino is so catchy. It never gets old with its upbeat tunes and even the more mellow ones like the museum theme. It also runs fullscreen on iPhone 11 and iPad Pro and looks excellent.

When I first launched Forager on iOS, I was impressed by the amount of features I look for in a port all seemingly being included. Forager has “cloud saving" but it hasn’t reliably worked for me beyond the first sync. Controller support on the other hand is well-implemented. You can even switch the button prompts being displayed between Nintendo Switch, PS4, and Xbox One which is useful for people coming from another platform. Sadly, there is no support for rumble right now. Since iOS recently added rumble support, hopefully the developers can work it into this port. I’ve verified that this is still the same even with version 1.02 that released earlier today. 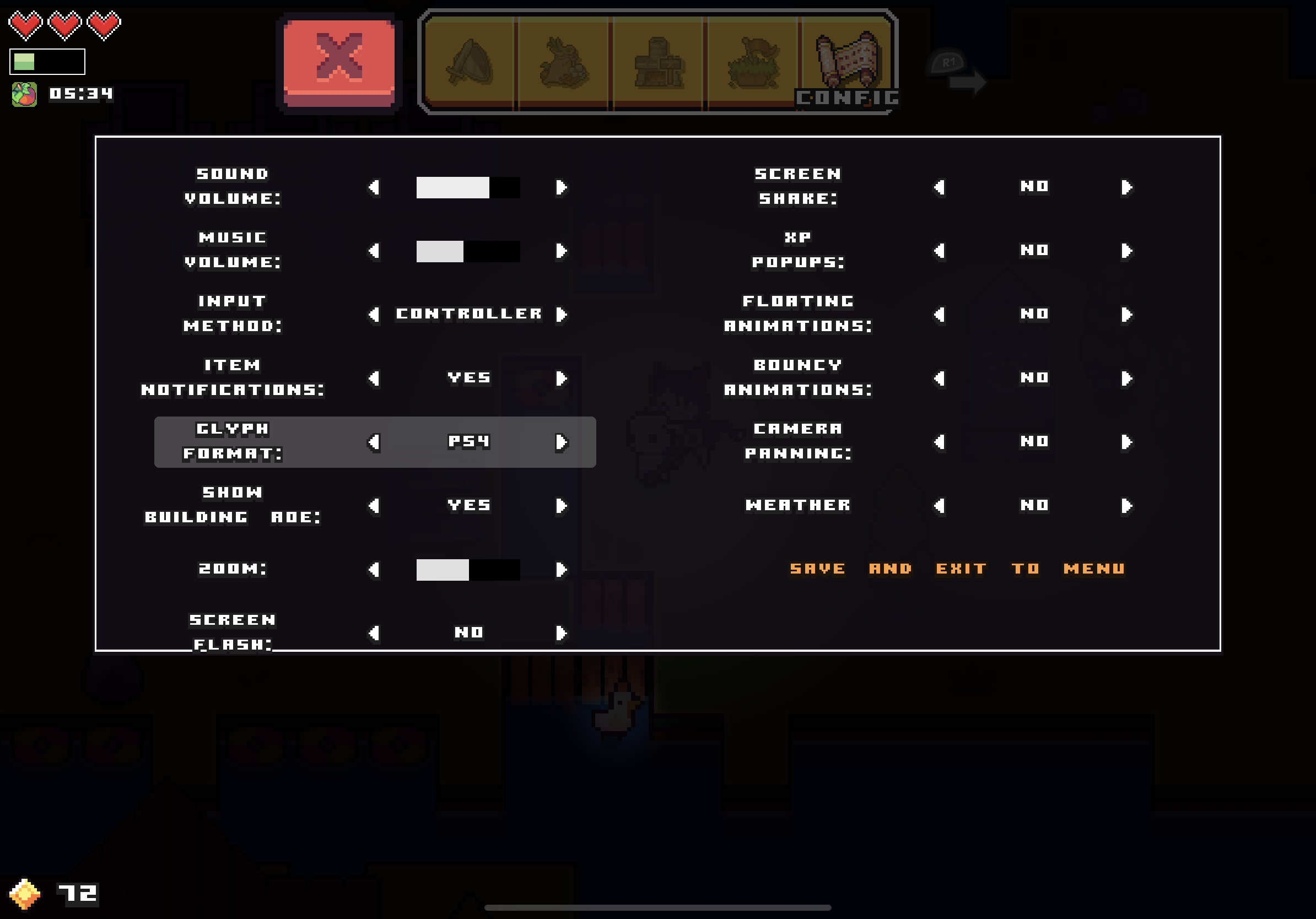 When it comes to touch controls, the implementation here is acceptable. I couldn’t find any form of customization in-game. You use a floating analog on the left to move and can swipe on the right of the screen to dodge or evade. After dodging you can’t move for a bit, while it is nearly instant on other systems. When you’re near a point of interest an A button is displayed on the right to interact. Inventory can be switched by tapping on an item in the bar at the bottom.

When Forager initially launched on consoles, it lacked a lot of accessibility options and visual settings. Thankfully, the iOS version includes all the options to turn off screen shake and the like right from the get go. Sadly, there are no visual options to improve the frame rate or adjust certain visual settings like bloom. You can disable the weather effects though. 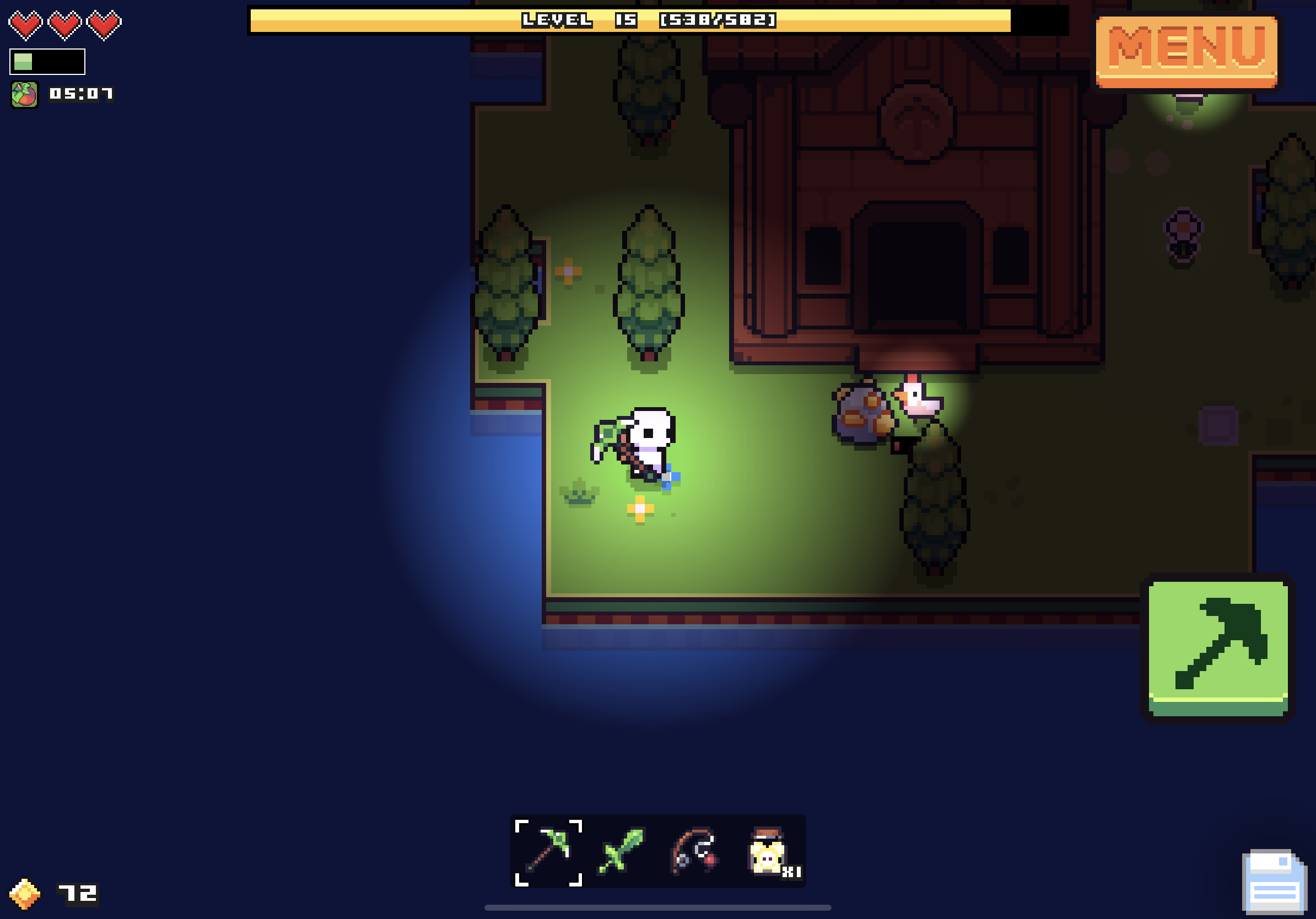 My biggest problems with this release barring the touch control issues are to do with the responsiveness, cloud syncing, and interface. Forager has iCloud save syncing but it only reliably works the first time. I couldn’t get it to sync at all after and had to delete and reinstall Forager for it to force sync the save. I tested this on multiple devices on two different iCloud accounts. Performance as a whole is a big downer for me on iPhone 11 and iPad Pro (2020). Forager feels much more responsive on consoles across its UI and the game itself. The final issue is in touch targets for buttons. In some cases, the UI scales well but others it feels too small with no real consideration for touch input sizes.

Overall, Forager on iOS is a bit of a mixed bag. On its own, it is easy to recommend assuming you play with a controller because the touch controls aren’t great and there’s no real customization for them. However, if you already own Forager on another system and want a portable version, I’d recommend waiting for a patch to see if the control issues and UI get addressed. Forager itself is a must play as far as I’m concerned but the iOS port leaves a lot to be desired despite being more feature complete than most console-to-mobile ports. Hopefully these updates don’t take as long as the initial console updates did because this is absolutely a game that is perfect to play on the go and one that will have you keep coming back for a quick play session. Once it gets fixed up a bit, this will likely be one of the games I play the most on my phone.