I’m a big fan of slapping RPG mechanics onto an otherwise pretty straightforward game mechanic to create something a little more substantial, and that’s just what Left is Right studio aka solo developer Stuart Wallace has done with the concept of tennis in his new game QuestBall (Free). Or instead of tennis you could say Pong, or table tennis, or volleyball, or even badminton I guess. Basically any game where two players are batting an object back and forth with the goal of getting said object past your opponent to score a point. Left is Right has taken that tried and true concept and applied a thin veneer of fantasy RPG on top, creating an incredibly entertaining experience. 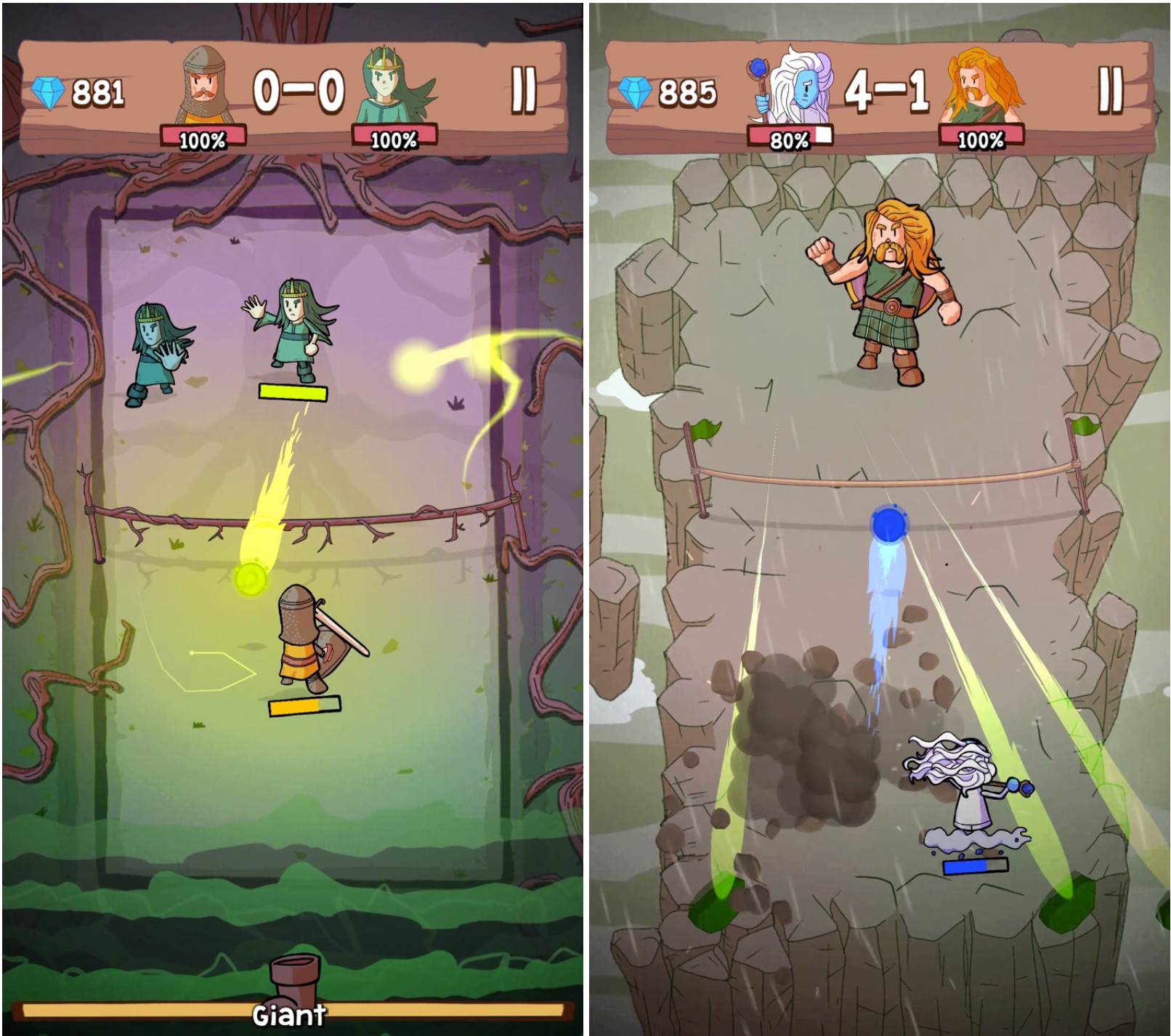 Playing QuestBall couldn’t be any simpler. You hold down on the screen to load up your swing, and release when the ball is near to hit it towards your opponent. Try to bait your opponent to get them out of position and use angled shots in order to blast on past them and earn a point. I mean, we all know how this goes by now, right? The real fun in QuestBall is in the game’s 8 playable characters who each have their own unique set of attributes and play quite differently from one another. These characters are based on actual historical and mythical figures, like Robin Hood, William Wallace, or the Scottish goddess Beira.

Each character also has their own special attack that you can unleash once you’ve filled up a magic meter which increases with successful shots and rallies and decreases when your opponent scores on you. These special attacks relate to another unique mechanics in the game: Your life meter. Yes, in addition to not letting your opponent outscore you, you’re also trying to prevent them from killing you. Along with those special attacks being able to knock some life away, each character’s unique court also features dangerous elements that you’ll need to dodge or otherwise be aware of during the course of each game, like arrows randomly firing from the forest in Robin Hood’s stage or powder kegs that can blow up and hurt you if you don’t stamp out their fuse on Guy Fawkes’s stage.

Finally, there are special ability icons that will randomly show up on the court that you can collect and stock up to 3 and then use them when you deem fit. These can be things like super strength or speed, turning your character into a giant, slowing down the speed of your opponent, and more. The different characters, special attacks, and these abilities all combine together to create a game that’s like Pong on steroids. But super charming fantasy-based steroids. The AI is no pushover either so QuestBall definitely puts up a satisfying challenge, and pushes that even further with an unlockable Hard Mode.

QuestBall is free to download and you’ll unlock characters by using gems that you earn through playing. Or, you can say nuts to that and just unlock the whole game right away for a $1.99 IAP. The developer is very active in our forums if you want to drop by to leave your thoughts or feedback, so for free there’s no reason you shouldn’t be checking out this super fun take on a classic game.