When Spike Chunsoft announced an iOS and Android release for the Danganronpa trilogy, I was very pleased. I’ve played the first two games in the series on literally every platform they have been released on in English and basically adore the series. Danganronpa: Trigger Happy Havoc ($15.99) is the first game in the series and it has arrived on iOS and Android as a premium release with a few enhancements and additions over the console and PC versions.

If you’ve never heard of this series before, Danganronpa: Trigger Happy Havoc is the first entry and this franchise blends exploration, mini games, puzzles, murders, mystery, and great music together with one of the most memorable casts you will interact with in adventure games. This series blends visual novel and adventure games together with a story that keeps you at the edge of your seat. Even though I’ve played Danganronpa: Trigger Happy Havoc on iOS for review, the story and cast have aged brilliantly and this cements the game and series as one of my favourites of all time. 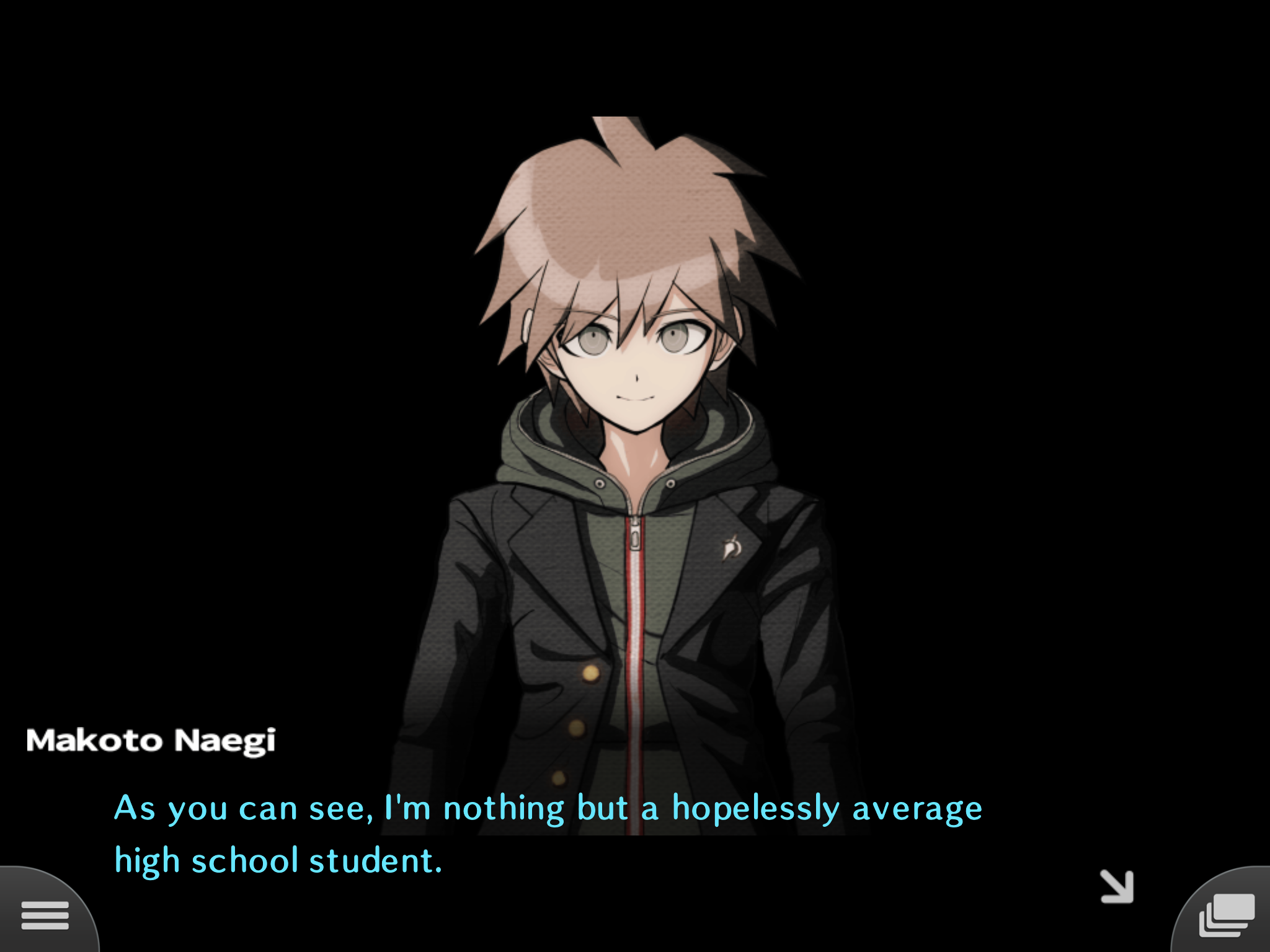 The basic game flow here for those who haven’t played these releases before is visual novel storytelling with some exploration that leads into a murder mystery which then leads into a trial. The trial brings mini games and puzzles into the picture after you’ve gathered evidence and “truth bullets." The trials are great despite some mini games feeling a little tacked on.

Danganronpa: Trigger Happy Havoc has great touch controls. You use the left part of the screen to move and the right part to rotate the camera. Touch controls work very well even for exploration and free movement. Danganronpa: Trigger Happy Havoc was a joy to play on PS Vita years ago because you could tap at various things in locations to inspect and interact with them. Using an analog stick never felt as good. I did run into a bug once so far where the right side of the screen for camera movement wouldn’t work.

Barring exploration and interactions, mini games and puzzles in trials are the main gameplay in Danganronpa: Trigger Happy Havoc. These control brilliantly with touch. Considering how well they worked on PS Vita, I’m not really surprised. Each trial has a few of these back and forth debates and mini games that finally see you try to piece things together like a comic panel. Once you place the various bits of evidence on the panel like a timeline, it plays out with some animation and is very stylish just like the rest of the game.

There is one portion at the end of the trial that might throw some people off since it is a rhythm mini game. Touch controls for this might be a problem for you but I got into the groove quite easily. Despite already knowing this stuff from the multiple times I’ve played this game, I can’t get over how great the story beats are and how well trials flow in the first game alongside Masafumi Takada’s music.

This release will appeal to two groups of people. The first is those who already played the game on a prior platform but want an excuse to replay the games, and the second is for those who have been waiting to play Danganronpa: Trigger Happy Havoc on a modern portable system. This port nails almost everything and it actually improves on both the PC and PS4 releases in some ways. I’ve been replaying the game on those two platforms alongside the iOS version on iPad Air 2 and iPhone 11 and the iOS version is fantastic with a few flaws.

When Spike Chunsoft and Abstraction Games brought Danganronpa: Trigger Happy Havoc to PC on Steam, it had a performance boost over PS Vita and better visuals but a lot of the interface elements and even the text was lower quality than it should be. When this was brought to PS4 in a collection, the text was fixed and some elements were updated but it still wasn’t amazing. I was worried about the blurry text given how it still hasn’t been fixed on PC. On iOS, more of the UI has been touched up and almost everything looks great. Some of the art assets still look blurry as they do on every platform sadly.

Danganronpa: Trigger Happy Havoc was originally designed for 16:9 displays so you should expect a lot of black bars if you play on iPhone X screen sizes or iPads. The segments of gameplay that don’t involve pre-rendered cutscenes or art display full screen and look fantastic. The exploration moments in particular feel excellent with a rock solid frame rate and high resolution visuals on modern devices.

On iPhone 11, I had no performance problems in the game and it ran at 60fps. Everything ran smoothly without a single hitch. iPad Air 2 on the other hand seems like it runs at an unlocked frame rate that adjusts on the fly depending on what is being displayed on the screen. Don’t expect a locked 60fps or anything on older devices like iPad Air 2. It also got very warm after a bit of playing Danganronpa: Trigger Happy Havoc. Overall, this is a big step up over the PS Vita version and on par with the PC and PS4 versions. It also loads super fast on iOS.

In terms of contents, Danganronpa: Trigger Happy Havoc has the complete experience in addition to a few gallery extras which serve as a nice bonus for longtime fans. Despite some claiming that the mobile version lacks English and Japanese voice acting, Danganronpa: Trigger Happy Havoc supports both and you can switch between them. There’s literally a language option on the main menu letting you switch between English or Japanese voices with English, Japanese, and Chinese text.

Danganronpa: Trigger Happy Havoc was already one of the best adventure games in a long time when it released on PS Vita years ago. It is great to see it on iOS now in all its glory with a few extras. As an initial release, Spike Chunsoft nailed almost everything but there still are a few things that need to be fixed. The first is the lack of iCloud save support. A full high quality premium port on iOS really should have this basic feature. The next area the port is lacking is in controller support. While it plays and feels excellent with touch controls, the game already supports controllers on other platforms so this should’ve been available in the Anniversary Edition.

The final issue with Danganronpa: Trigger Happy Havoc on iOS is in some interface elements. It looks like some menus were redone for higher resolution displays on mobile and they have some artifacts on the edges in some situations. This is a bit distracting in an otherwise great port. It would also be nice if the multitasking or home menu bar on modern iPhones would not be visible at all times.

Despite those minor blemishes, Danganronpa: Trigger Happy Havoc Anniversary Edition on iOS is now the version of the game I will recommend to newcomers to the series. It was already a must play for anyone looking for a good story and great music and it is more accessible than ever before thanks to iOS and Android releases of such a high quality. Even if you try and rush through it (which I wouldn’t recommend), you will find yourself enthralled for over 20 hours here. I can’t wait for Danganronpa 2: Goodbye Despair to arrive because it is my favourite of the trilogy. Danganronpa: Trigger Happy Havoc Anniversary Edition is well worth your time.