I have a love/hate relationship with word games. The love comes from them being the perfect sort of fit for the bite-sized bits of free time that mobile gaming can fill in so well. The hate part comes from word games requiring me to use my brain. That’s not always a bad thing mind you, but sometimes I just want to zone out and match gems or make paperclips, you know? Not do a bunch of thinking. Plus I have the type of brain that must stare at a jumble of words and make certain I’m forming the absolute best word possible out of the given letters. I will do this for as long as it takes. People do not like playing Words Against Friends or Scrabble with me. It’s a curse.

Anyway, one word game that has spent far more time on the “love" side of things for me has been Zach Gage’s SpellTower ($2.99). Released going on ten years ago now, SpellTower was a pretty simple and straightforward idea for a word game that was executed to near perfection, like most of Gage’s work. In its main mode you were presented with a screen full of random letters with your job being to clear as many of those letters as possible by creating words and utilizing various special attributes of the board. The second main mode of SpellTower sees you starting with a screen that’s partially full of random letters, with each word you make raising the board from the bottom by one row. Make as many words and score as many points as you can before your board of letters reaches the top.

There are multiple additional modes that are all pretty much based on these two core modes, and not only did we love SpellTower in our original review from when it released but we also included it as a runner-up for our Game of the Year in 2011. And that was before the numerous updates that have been released over the years that have added in new modes like multiplayer and a Daily Tower, new features like Merriam-Webster dictionary support, and constant updates ensuring SpellTower has always worked on the latest versions of iOS and the latest Apple hardware. Nearly ten years in and SpellTower is still one of the very best word games you can get for your mobile device, but that also means it’s kind of due for a refresh. Enter SpellTower+.

SpellTower+ is one part reimagining of the original game, and one part semi-sequel. Familiar modes like Tower, Daily Tower, Puzzle, Rush and Zen all make a comeback but with a fresh twist as there are now brand new Bonus Tiles that can double (or more) the values of the words you make. If you think you’ve mastered the modes in the original game, this should shake things up a bit. Then there are completely new modes like Search mode, ExPuzzle, Double Puzzle, Bubble Puzzle, and Blitz mode. Search mode, as explained in the App Store screenshots, tasks you with finding the longest word possible using a specific starred letter. What do the other new modes have in store? I don’t know! It’s so exciting! 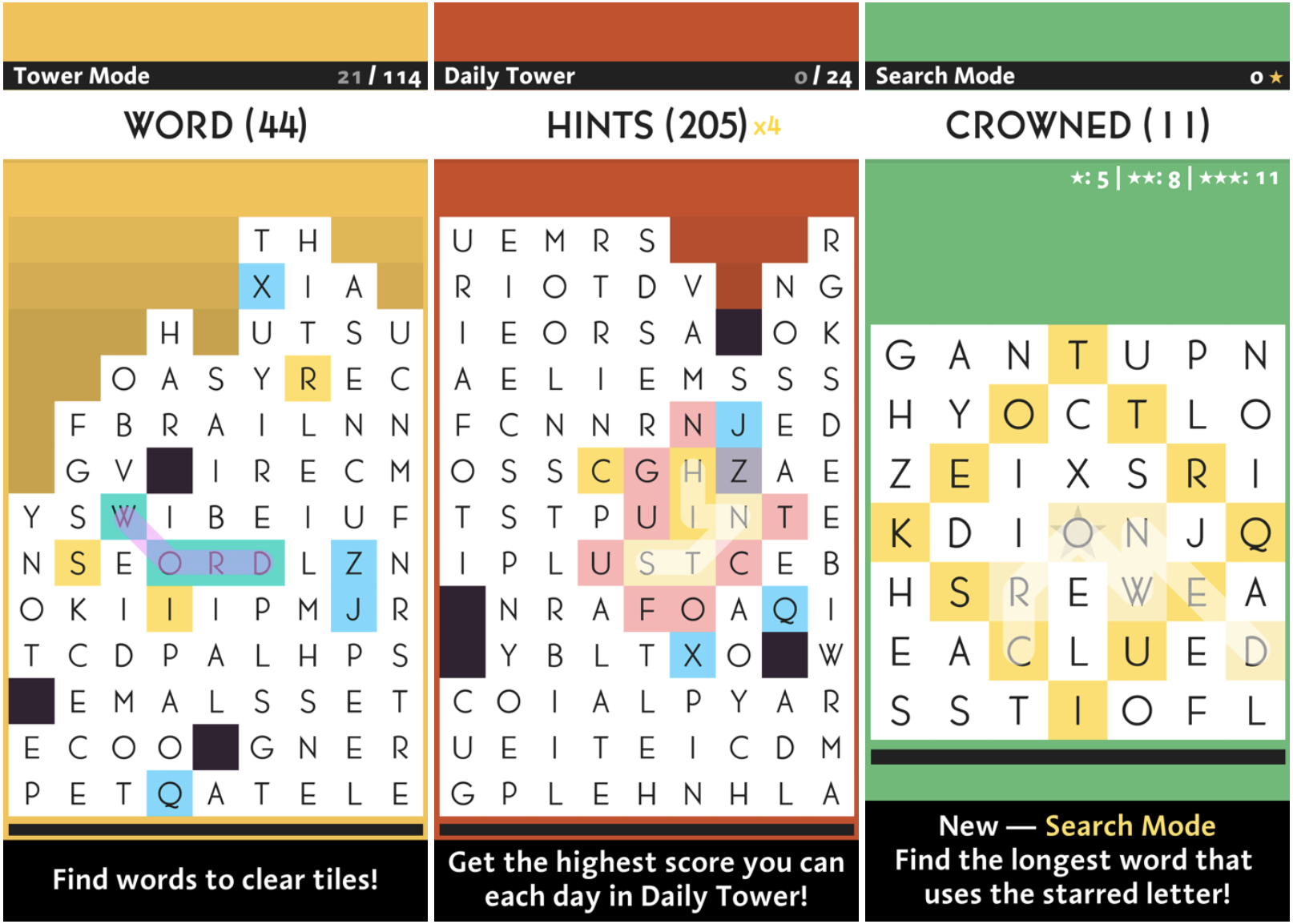 Other new features in SpellTower+ include “iCloud Backup, Highscores reported for games even while in-progress, detailed statistics for every mode, Game Center leaderboards, and achievements." The iCloud syncing is a big one that people have been asking for for a long time, but a hard one to implement for a number of reasons. Mainly because the original game was iPad-only and when scaling it down for the iPhone that also meant removing some of the rows that were used in a normal game on the iPad’s larger screen. Later on when the iPhone 5 with its taller screen was released, Gage allowed players to play “iPad-sized" games on the iPhone in a special separate mode, and that allowed for some limited progress syncing between the two devices. It appears that SpellTower+ will use the same sized puzzles on both iPhone and iPad for true syncing between the two versions.

So like I said, this isn’t simply an updated version of the original SpellTower, and it isn’t a full-blown sequel either. It’s SpellTower “plus" a bunch of cool improvements and additions. It’s SpellTower+! It’ll be free to try with a single IAP to unlock the full game, and if you are as excited as I am about it you can pre-order SpellTower+ on the App Store right now ahead of its official launch this Thursday. And Android folks, don’t worry as there’s a version for you coming sometime down the line as well.