I, like many other rogue-like fans, am thrilled by the number of excellent entries to the world of mobile gaming over the past year. Immortal Rogue, released fairly early in the year, was one of my personal favorites. It felt great to play, nailed the dark and brooding theme, and I’m a fan of vampires anyway. It was a natural fit, and put Kyle Barrett on my radar. This year, he’s back from battlefields of old and future, to invite us on a journey that, while definitely less grim, brooding, and 100% vampire free, is no less lonely, isolated, and vaguely horrifying. Accept, and join us as we embark on a journey across the stars and through asteroid belts, amidst the ravening denizens of a hive world and through the wreckage of ancient battlefields, to the End of the Universe ($3.99).

If you’re looking for a game that demands quick reactions, a bit of planning, a dash of luck, and more guns than can be crammed into an escape pod then, well, you’ve come to the right place. End of the Universe delivers on all counts, with a double helping of guns and only half an escape pod. Players wake up on an unknown spacecraft in unknown space with one very clear objective: Survival. It is, of course, quite futile, but that shouldn’t stop anyone from trying! Between the mess of asteroids and space junk, there’s hardly room to breathe let alone avoid the missiles and plasma ejected from all those ships over there. Nevertheless, it must be done. As if a legion of baddies with bullets wasn’t enough, there’s also the bosses to contend with: Space centipedes, advanced starships of unknown design, and cosmic horrors with mind-bending technology. Against these odds, survival was never an option. 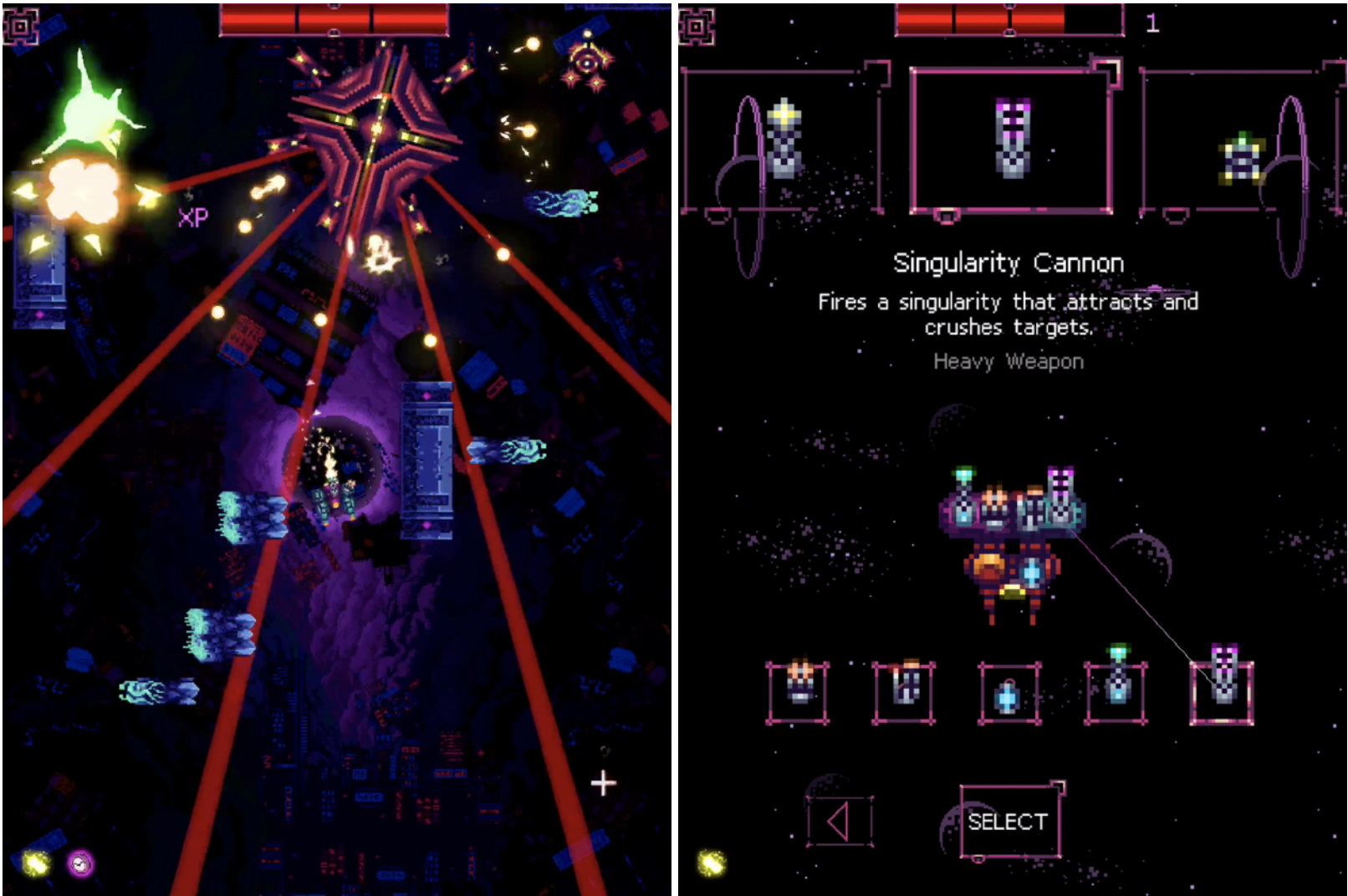 It is delightfully difficult, and it owes this difficulty in large part to the tiny health pools and the frequently ridiculous number of bullets on screen. While a single hit, scrape, or close encounter with flying debris only removes a single hit point, it’s a considerable loss when you’ve only three to begin with. Outside of the first three stages or so, enemies seem to multiply like sand, frequently sprouting from asteroids or thin air. Fortunately, stages seem to be quite a bit larger (or simply not have out-of-bound areas), which allows for just enough room to maneuver and not feel quite so cramped by the imminent danger of hitting an asteroid, baddie, or the edge of Bad Space.

Control-wise, the basic one-finger or two-finger options used in Immortal Rogue have made their return, along with a sensitivity slider. Drag to move, swipe to boost, release a swipe (or tap) to fire the heavy weapons; alternatively, move on one side of the screen and use heavy weapons on the other. They work well, although they do require a bit of practice if you haven’t used them before. My biggest grievance, actually, is with the turn animations. The turn rate is rather slow, which makes the animations feel clunky, and it’s a little hard to predict which way the ship will turn at times. That said, it is not out of place for a space ship to take such large turns. Not like a giant hunk o’ metal can turn on a dime, eh? 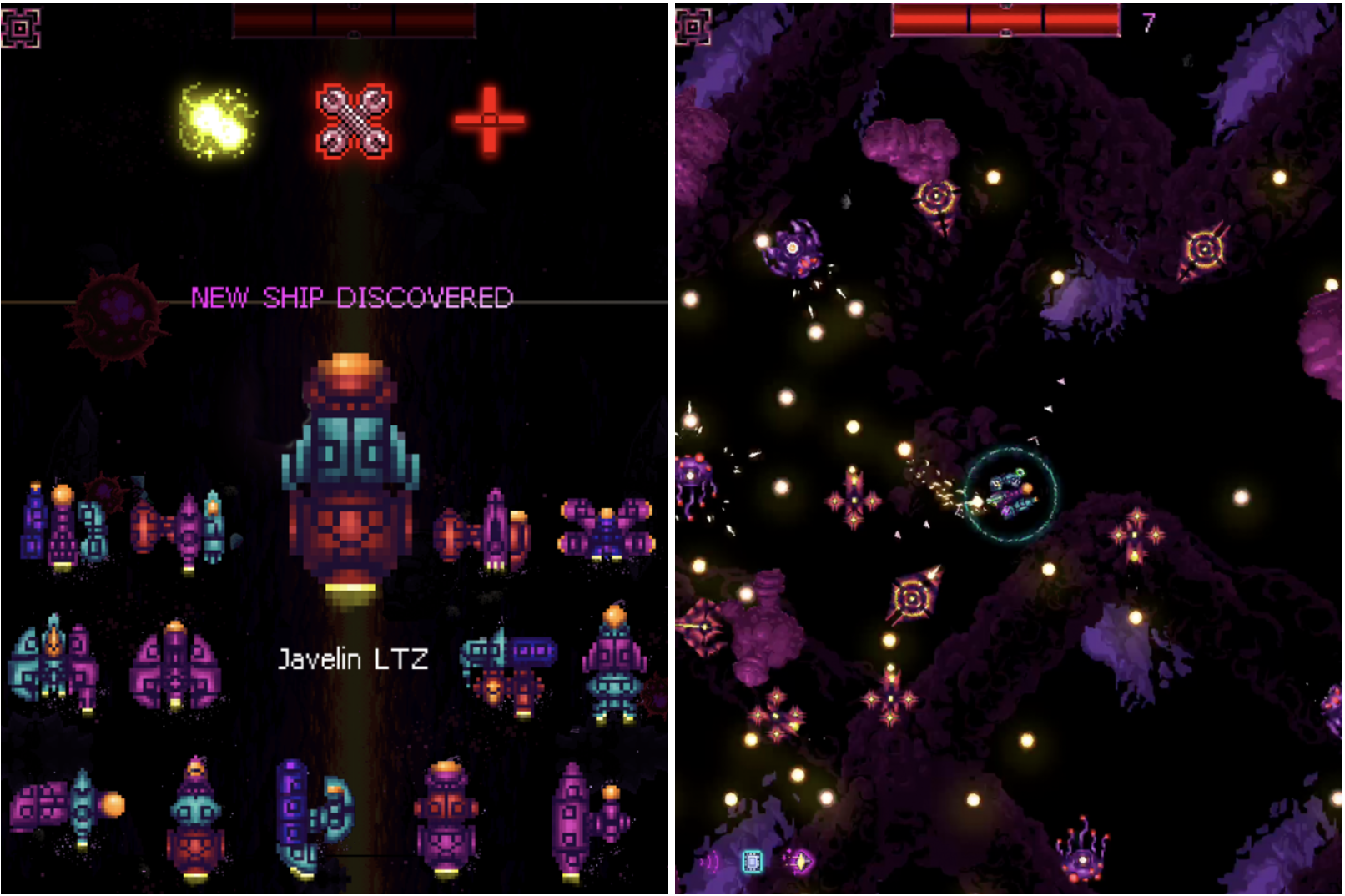 Not very keen on the starter ship or the smart turret? There’s good news: There are a ton of unlockable weapons and even more ships to find, never mind the skills. Each ship has a certain number of slots that can hold modifications, heavy weapons, or light weapons. Modifications are force multipliers, changing the basic functions of either the ship or any equipped weapons that fit the critera. Examples include movement speed boosts, recharge rate boosts, fire rate boosts, and other, more niche changes. Heavy weapons are the go-to for bosses, featuring heavy hitters like particle cannons, plasma casters, and smart missile launchers, as well as more unique and niche weapons like remote turrets and mines. Light weapons, on the other hand, include the ever useful homing rocket, rocket launcher, and auto cannon. They throw weaker punches, but a whole lot more of them. Add in skills like larger explosions, boosting to recharge heavy weapons, or a skill that causes enemies to throw out debris, and there are more than enough ways to turn good weapon into an incredible weapon, a good build into an incredible build.

Deserted space highways and broken worlds, ancient battlefields and thriving hives, all have been crafted with an eye for minutiae and it shows. The backgrounds are not alone in their detail, however. Tentacled monstrosities, cosmic horrors, advanced spacecraft, missiles, lasers, and other various enemies and projectiles are similarly detailed, although not nearly as much. Despite the detail, the background is not too vibrant, the enemies not too distracting, and bullets and hazards are not too dull. All is precisely as it should be: Clear, playable, and informative, but also pleasing to the eye. Make no mistake, however: This is not a game you play because of the art. It is a rogue-like, and its visuals, excellent though they are, are not beautiful.

If the art conveys the impression of an empty void and an impending doom with enemies on all sides, then the soundtrack instills an urgency to do… something. It is rarely quiet, calm, or relaxed, and certainly never slow, instead favoring fast-paced, high-intensity tracks that lend weight to the air of impending doom that permeates every stage. Thematically, I love it. While it’s really just a hand-wavey excuse to blow up aliens with cool weapons in space, the idea of a last bon voyage, guns blazing, at the edge of charted, or uncharted, space is… well, frankly it’s pretty great. Each and every element of End of the Universe—movement, enemies, environments, soundtrack, and all the rest—reinforces the central feeling of being isolated, alone against hordes of uncaring, unyielding baddies, and that it’s only going to go downhill from here. I, simply put, am a fan.

Overall, End of the Universe feels good to play. While neither music nor sound effects alone stand out, the combined effect, especially with the art, is excellent. The controls are smooth and work well, and the basic gameplay of avoiding obstacles, bullets, and catching baddies with a hail of lasers, missiles, or a black hole (a black hole!) is incredibly satisfying. While it’s certainly not going to be everyone’s cup of tea, fans of Immortal Rogue will not be disappointed. More broadly, anyone interested in pixel art, rogue-likes, pixel art in rogue-likes, or fast-paced games with mild tones of existential dread should give it a shot. It’s worth it.