When I was first turned on to Immortal Rogue ($4.99), I was attracted by the unique narrative system. After actually playing, though, what’s kept me interested is the gameplay. Sure, the retro visuals don’t hurt, and the soundtrack is pretty great too, but I’m a sucker for hard games with minimal tolerance for mistakes—and, to be sure, Immortal Rogue is one of those games.

Before we really dig into the nitty-gritty gameplay mechanics and controls, however, let’s take a look at the two aspects which first grab attention: Visuals, and sound. Upon opening the game, we are greeted by an ancient battlefield… and a singular figure, cloaked in purple, standing tall amidst the ruins. This landscape, beautiful in its own way, establishes the tone (and, to a certain extent, the narrative). As we begin, the music rises to the forefront—mournful, reflective, the theme is cemented. There are no heroes here, no deeds of outstanding valour or wisdom. There is only the survivor of an ancient battle, and a predator.

Moving into the game proper, we are introduced to the basic controls—swipe to dash, tap to attack, and a short hold into a swipe to execute a heavy attack. With the exception of the heavy attack, these all feel fluid, responsive, and—dare I say it—intuitive. Unfortunately, the heavy attack takes quite a bit of trial and error before it feels as smooth—quite often I found myself dashing when I wanted to use my heavy, or using my heavy when I wanted to attack. This usually wasn’t a major inconvenience, but, on the other hand, it only rarely occured in the middle of a mob, and boss fights require a more methodical approach to begin with. Builds with a focus on charging heavy attacks and maneuvering around a fight may be somewhat hampered, however.

Utilising the basic controls and surviving a few hundred years is a fairly straightforward affair; mastering them, and not only surviving but thriving, is something else entirely. Attacks feel solid and impactful, and the immediately apparent strategies are rewarding. It is easy to imagine the first century, or even the first several centuries, as frenzied feedings in chaotic bloodbaths—after all, they are. While there is no visual animation emphasising the point, there is an undeniable parallel between the pattern of dashing onto enemies and hacking them to death, and a bloodthirsty animal ravaging its prey. I can only hope it is intentional, because the visceral feeling it evokes upon slaying the first mini-boss is nothing less than thrilling.

With experience comes wisdom, however, and in this case wisdom reveals a different, safer, playstyle: Dashing from attack to attack. All weapons have a combo; for most, this is a three-hit combo; for others, it is a two- or four-hit combo. After completing the combo, there is a delay before it can be used again. Dashing, or using heavy attacks, resets that delay, allowing for multiple combos to be chained back-to-back—and, more importantly, never letting your opponent, or opponents, attack. Done well, this technique transforms the image of a blood-starved vampire into one of a calculating predator, stalking its prey from the shadows.

As a freshly turned vampire you will sleep for centuries, waking only to feed. When you wake, you can, through your choice of prey, change the world by reinforcing the Powers That Be… or by weakening them. This is the narrative structure of Immortal Rogue, and it makes a big promise: You, the player, have the power to determine how this world develops. For someone who adores choose your own adventure novels or the games inspired by them, this is a wonderful, wonderful mechanic. Unfortunately, it doesn’t quite deliver.

Sure, on the first run—and the second, third, and fourth—it can be pretty interesting playing with all the different options, seeing how the world changes and adapts. But, at some point, it gets… stale. Maybe it’s when you try to enforce a lasting, stable government; maybe it’s when you try to maintain instability and, in doing so, stave off the rise of technology. Maybe it’s just the inevitable weariness which comes from beating a game time and time again. Whatever the cause, the choice of who to feed upon begins to feel meaningless, the centuries blending together distinguished only by differences in opponents—are you fighting high-tech baddies with grenade launchers, or spear-wielding barbarians? While this could be spun as a feature, a commentary of sorts on the tedium of extremely long lives, it was, nevertheless, a pretty big disappointment for me since (ignoring the whole vampire thing), the “Guide the development of a world” was a big selling point. 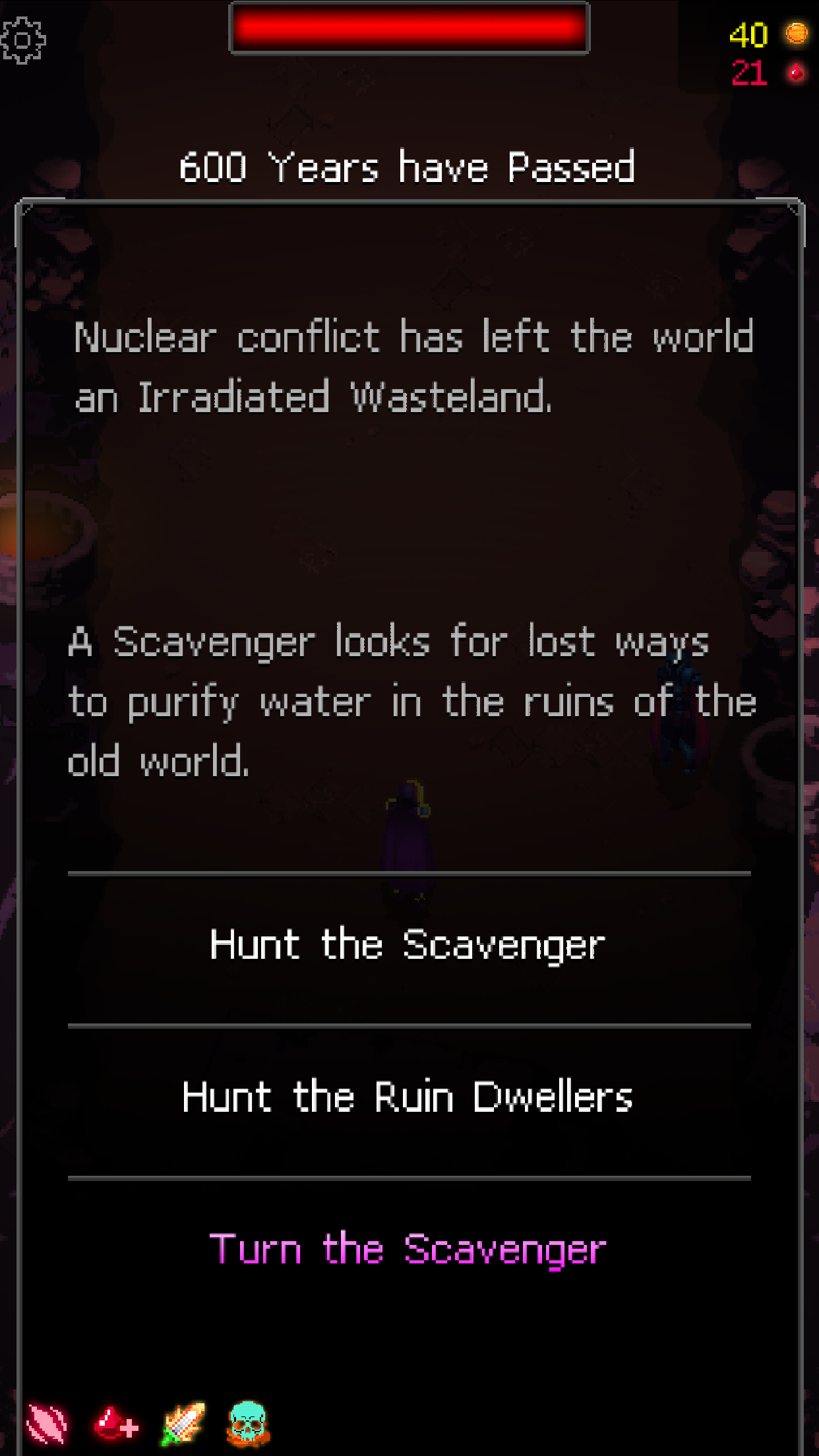 Despite my gripes with prey selection and narrative, the combat and difficulty are well done and deliver exactly what I expected going in: A thrilling, fast-paced, difficult hack & slash roguelike. Runs are not too challenging initially (actually, it would be an improvement if they were generally tougher), but scale nicely into a nerve-wracking dance of managing the bothersome ranged baddies, the mobs of melee bruisers, and Dracula’s minions. I do have one minor issue with the combat, however: When playing on a device with a home bar (specifically an iPhone X), it is very easy to swipe out of the game on accident. While not major, it is a problem that could prematurely end a run.

On the whole, I have remarkably few complaints. I have enjoyed my time playing Immortal Rogue and, bar the few complaints I do have, recommend it wholeheartedly. I would like to see the narrative system addressed, and the home bar issue fixed; but, after that… well, I can only wait to see what else Kyle Barrett has in store. If what we have is any indication, the future will not disappoint.