Randomly generated games can be tricky as developers need to be careful that their games don’t become annoying or repetitive. This brings us to Card of Darkness, an adventure/puzzle/strategy/card game from Zach Gage, Pendleton Ward, and Choice Provisions that features elements of randomness. You start your adventure in Glinhorn Forest, a place filled with monsters. The prophecy foretold that you, the hero, would arrive and rescue this world from the darkness that’s consuming it. Or at least, that’s what the man at the store told you.

You’ll go through several dungeons located across each area. Every dungeon is filled with monsters, spells, and items. Some will help you, some will hurt you. Your goal is to go through the dungeon without dying. There are a total of 8 areas across the map of the game. Card of Darkness is mostly a linear game, with a few exceptions that let you take another path to reach the same destination.

Every time you go into a dungeon, you can equip at least one Card of Darkness. The Cards of Darkness are holding items that grant you some kind of ability. Some abilities are not that helpful, while other abilities can boost your health or make extra potions appear on each floor of a dungeon. The dungeons are where the action happens. Every time you enter a dungeon you’ll see a floor with stacks of cards. These cards are randomly generated so, as Forrest Gump would say, you never know what you’re going to get. You know, like a box of chocolates. 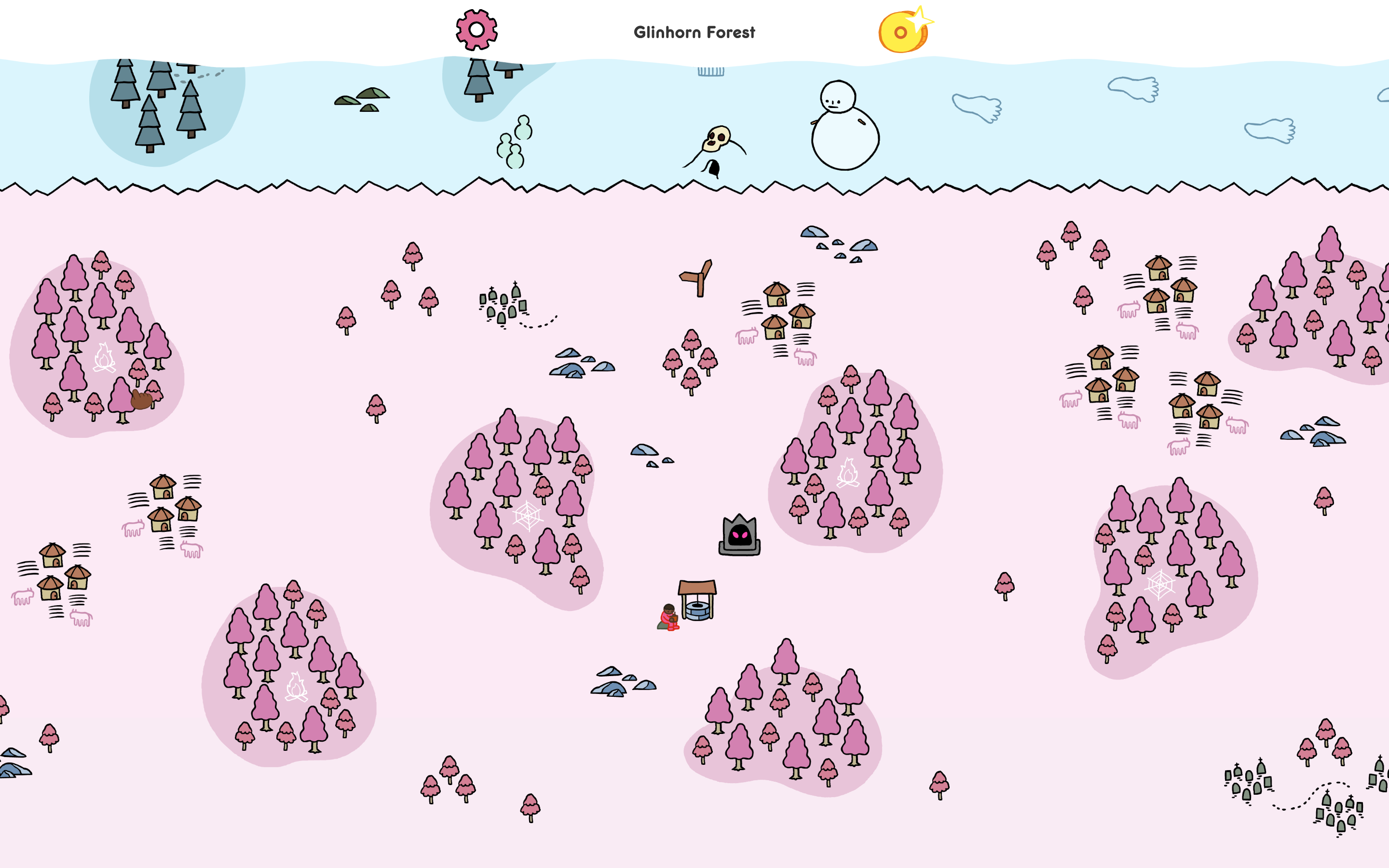 Your objective is to create a path to reach the other side. You do this by taking cards out of the stacks. If you take a card, you’ll have to take them all. Depending on what the card is, you might have to fight an enemy, grab a weapon or a spell, or use a healing potion. Enemies will have a number below them that represents the Life Points you’ll lose by attacking them. Weapons also have a number below them that’ll help you lose fewer Life Points.

Personally, I like the randomness every dungeon had. Not knowing what you’re going against makes you prepare around what you can control, which is the Card of Darkness and the other items you can purchase from the shop. That being said, it might become a little frustrating and repetitive if you don’t pull a lucky game. I kid you not, I spent almost half an hour on a dungeon just to clear it in no time because of some random good RNG. And yes, I did get mad, but I kept playing because I was actually having fun.

I think one of the things that kept me from rage quitting was the simplicity in Card of Darkness’s gameplay. It’s borderline addictive. Since you only have to tap around, you automatically wanted to enter the dungeon again. Don’t get me wrong, losing because of randomness can get annoying, especially if you’re on the last floor of a dungeon. However, luck is always a big factor in card games. Whether it’s Card of Darkness, Yu-Gi-Oh!, or Hearthstone. It’s still BS, but it’s part of the game.

Funny enough, I found boss battles to be easier than the actual dungeons. When battling a boss, instead of creating a path to cross, you have to take cards of stacks until you find the heart of the boss. You have to destroy 3 hearts to win the battle.

Another thing I enjoyed about Card of Darkness is the next level of creativity the team had for this game. Everything from the environment to the characters feels unique and colorful. The characters have personality, even the bad ones, and they’re likable, even if they don’t say that much. And of course, there are over 100 cards available in the game. Sure, some enemies might get a little repetitive–like at first, you have a rock, and then you have an ice rock–but there are a ton of other enemies with unique styles and abilities that separate them from the rest. It felt like completing a Pokédex of bad guys

Overall, Card of Darkness is a fantastic game. Its simple, yet addictive gameplay, fantastic visuals, and creative battles outweigh the mild annoyance you might get by its randomly generated dungeons.

NOTE: Card of Darkness is available on mobile exclusively as part of Apple Arcade, a premium gaming subscription service from Apple. Without being a subscriber to Apple Arcade you cannot download and play this game. Apple Arcade is $4.99 per month and does come with a free one month trial, you can learn more about it on Apple’s official website or by visiting our dedicated Apple Arcade forum.