Let’s start with what the question most Hearthstone (Free) players have after Blizzard’s Battlegrounds announcement; is Battlegrounds, Hearthstone‘s upcoming new mode, fun to play? Based on my time with the game yesterday at BlizzCon, I would say yes, Battlegrounds will give you a fun new way to play the game that for many, including myself, might even become the preferred way to play the game, as long as new cards are added frequently so the meta doesn’t go stale fast.

For those who haven’t read our earlier article on Blizzard’s BlizzCon announcements, Hearthstone Battlegrounds is Blizzard’s take on the auto battler (or auto chess) genre where players pick their units and figure out their strategies before the battle begins, and then sit back and watch the battle play out. Battlegrounds borrows quite a bit from the genre: in the first round you purchase minions and set them on your board, and in the following round your minions get to fight the minions of one of the other seven players. If you win the round, you damage your opponent’s hero; if they win, you receive the damage. Once the combat round wraps up, you go back to buying and selling minions, and then on to fight another player until you are either knocked out or you are the last one standing.

Battlegrounds is relatively easy to quickly grasp, and Hearthstone players will have no problem quickly getting the hang of the new mode, even if some actions will feel counter-intuitive, as I’ll talk about in a bit. So, how do you play Battlegrounds? The first thing you do is pick one of the three heroes you’re offered, similarly to the Arena. Each hero (and there are over 20 currently in the game) has a different active or passive ability, which range from activating battlecries twice, attacking enemy minions, lowering the cost of minions or of shop upgrades, and so on. I will be very interested to see how the developers balance these abilities because with everyone having the same card pool, hero abilities will make a huge difference. For instance, one of the heroes can cause 3 damage to several minions once per round, which in the early rounds would almost wipe my board and felt way overpowered. Of course, it’s early days and I’m sure the devs will be keeping a close eye on balance issues.

Once you pick a hero, you start in the shop, and there you can either buy a minion, upgrade your shop, refresh the minion selection, or freeze the shop. Minions cost 3 coins, and each turn you get more coins, although—unlike other auto battlers—you can only have up to 10 coins a round, no matter if you save coins in earlier rounds. Part of building a winning strategy is figuring out when to buy minions, when to pay to upgrade your shop (which gives you higher-level minions), when to pay to refresh your minion selection, and when to freeze them, which costs zero and keeps those minions available for the next time you visit the shop.

Combat rules will remind you more of Tavern Brawls than traditional Hearthstone, since minions automatically attack from left to right, targeting taunt minions first and then other random minions. The mode offers no spells, so minion positioning, effects, and synergies are what it’s all about. What’s tricky to get used to is that you have to think of battlecries as something that happens while in the shop instead of something that happens when you would normally play a card at different times during combat. In other words, you’ll be buffing your minions in the shop, so the order you deploy your minions in the shop matters. Unlike other auto battlers, if you want to get rid of a minion from your lineup, you have to sell it; you can’t just move it to your bench to use at a later turn, which makes decisions tricky. 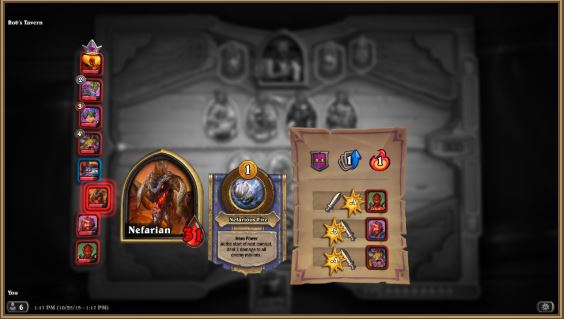 In my limited experience with the mode, I can see taunt minions being very valuable—since they can force your enemy’s minions to attack where you want them to. Also useful are tokens, poison, and sticky minions because your key to survival is having at least one more minion than your opponent at the end of combat. Synergies were another important key to victory, unsurprisingly, and I got to see metas rise and fall throughout the day based on all kinds of broken, and really fun to watch, synergies.

Will Battlegrounds be a success? I can tell you that in my time in the BlizzCon media room, the computers running the latest expansion were completely empty while the ones running Battlegrounds were quite busier. That could, of course, be the newness of this new mode, but as a long-time Hearthstone player who’s too busy to keep up with the meta or to put fancy decks together, I can see Battegrounds being the best way to get my Hearthstone fix without having to devote too much time. It won’t all be smooth sailing for Battlegrounds, though, because balance issues are bound to surface and, unless the devs add more cards or heroes, it won’t be long before the mode gets a bit too predictable or a bit too broken with everyone going for the same tribes because they clearly have the strongest synergies. 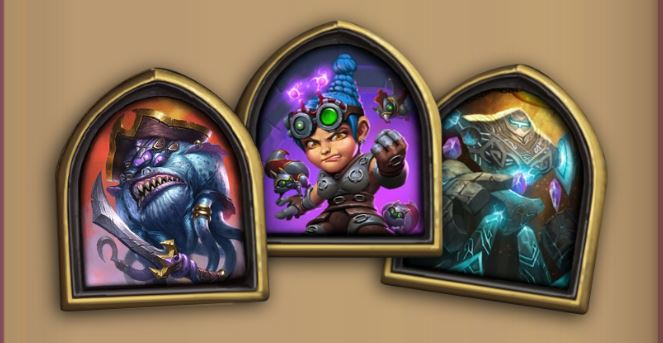