Yaga is a pretty standard entry into one of my favorite genres of games — action RPGs. You’ll begin the game as, literally, the most unlucky person in the kingdom. As Ivan, the one-armed blacksmith, you’ll travel through snowy mountains, vast fields, murky swamps, and undead graveyards in several quests meant to make the oh-so-very-benevolent king more powerful. Or not. Your choice, really.

In fact, Yaga will end up giving you many many choices throughout the game that’ll let you decide on how you not only interact with people but also who you help, when you depart on missions, how you handle a variety of different situations, and, of course, what you’ll be bringing with you to help you defeat the undead, the bandits, and the many creatures of the world. Choice is one of the biggest features in the game and it’s one that’s implemented very well and gives you a whole lot of freedom and replayability. 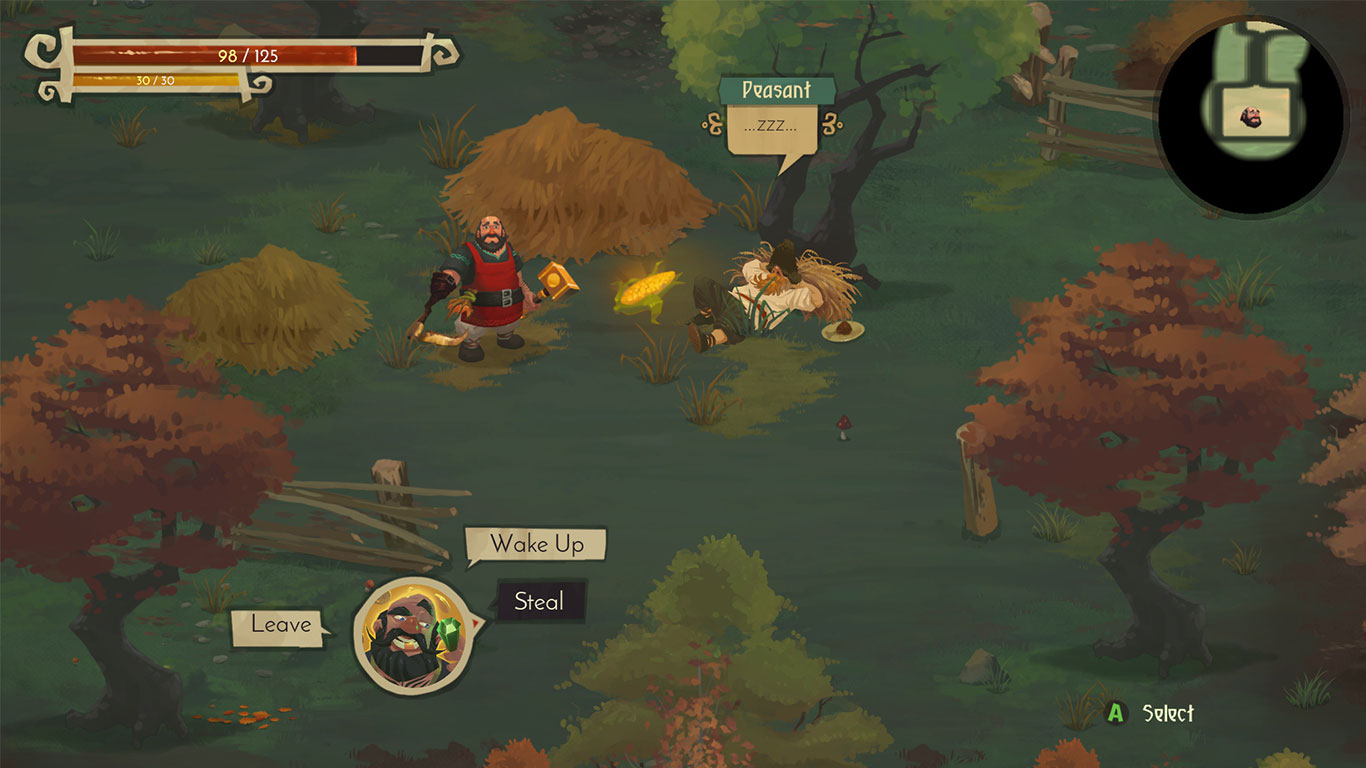 One of the ways choice is most noticeable is through a pretty standard kind of personality creator. You choose options and become either more righteous, aggressive, selfish, or foolish. Personally, I decided to take the righteous route but you’re never strictly tethered to one option or another. If you do decide to use options other than your main strength, however, you’ll find yourself gaining bad luck.

Bad luck is basically exactly what it sounds like — a terrible omen that’ll really REALLY ruin your good time. It’s pretty simple to understand, too. Accumulate enough bad luck and an evil witch comes and steals your stuff. Not everything, mind you, but a good chunk of gold and most of the equipment you’re using. Bad luck can be accumulated by choosing options different from your personality, doing bad things, using magic items, having unfortunate encounters, and fighting a terrible terrible boss that makes it keep going up endlessly. Throughout the game, you’re almost sure to get it up once or twice and so I’d recommend unequipping things you find important if it gets particularly high. You still might lose them but it at least lowers the odds. 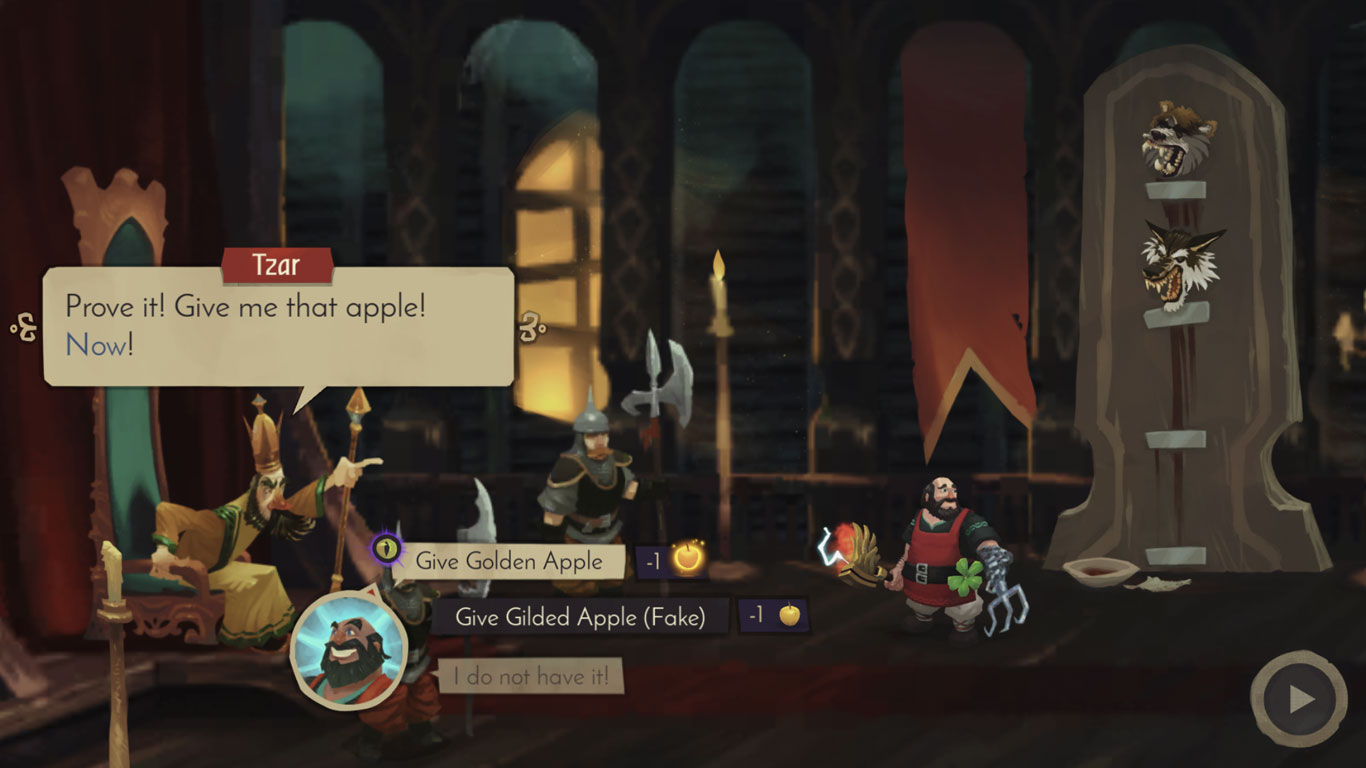 Yaga is played from a side-scrolling perspective and almost all of the game is combat and gathering quests. There’s rarely a fetch quest anywhere in sight and many side quests help to understand the many areas, characters, and lore of the world. Combat in the game can range anywhere from super easy near the mid-late game to insane depending on what you’re fighting and your strategy. You’ve got your main weapon of a hammer that can be crafted a number of different ways and also buffed by enchantments, but you’ve also got off-hand weapons. These can be wheel-shields, a sickle, shovel, and more. Each one has their own purpose but, honestly, I found myself never really using them. They just weren’t needed often enough when you can kill most enemies in 2-3 throws of your hammer.

Creating these tools and weapons really brings a lot of creativity to the game. In fact, rather than upgrading your character, this is really what you’ll be spending the crux of your off-time in. At the beginning, you’ll be pretty limited in what ores you can use and likely won’t have any great attachments for them. Pretty soon though, you’ll collect a healthy heap of diverse and super-fun attachments. By the end of the game, I was equipped with a long-distance, chaining hammer that, when thrown, would chain to other enemies and deal tons of damage. It was so powerful that, other than the final boss, I never felt in danger again. Working your way up is a blast in the game and I feel like difficulty was never an issue. 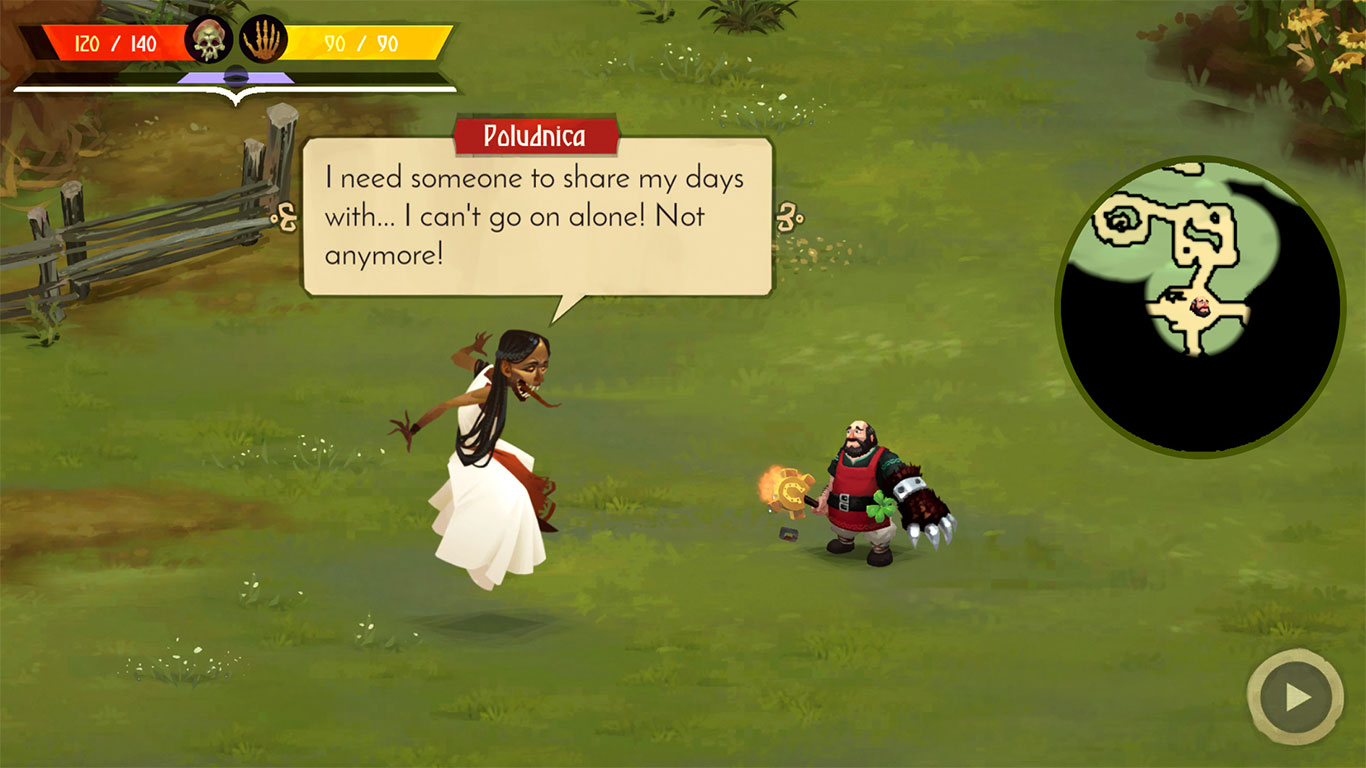 Now, let’s come to the story. It’s a pretty standard, dark little story. You’re cursed to be unlucky forever and the king wants you gone. Unfortunately, he can’t make you die by his hands so he’s instead going to send you on a series of increasingly impossible tasks. Luckily, your grandmother has your back and helps to point you in the right direction each time. Much of the story is said in rhyme, which can be enjoyable from time to time, but unfortunately there are quite a few that feel forced, and so the story might feel a little repetitive, of course. See what I did there? Rhymed it.

The controls for Yaga are… not my favorite. If you’re playing on a device, you’ll not be surprised to find that it’s got a joystick on one side and some buttons on the other. This bothered me a little as my thumb ended up a little sore and raw by the end of my 10~ hour journey. Luckily, it also has a controller option which I would highly recommend you use instead. This would help to not only combat the joystick but also make button presses a bit more deliberate, as I found myself randomly digging or dodging when I was trying to attack.

Finally, we come to the setting. Everything in the game is meant to be kind of on the dark and dreary side of fantasy. It reminded me a lot of the Grimms’ Fairy Tales and I feel that was probably what the developers were going for. The world around always felt alive, the environments were all diverse, and the characters were all… well kind of destitute and dead inside and hopeless, for the most part. While I wish there was a bit more variety in enemy types, I feel much of the game was different enough to keep my invested and interested.

Yaga, overall, was a really enjoyable experience for me and there were few hiccups at all. I found it both challenging and rewarding, with a storyline that kept me interested and combat that felt fluid and fun. The replayability and different endings you can obtain help it even further to be a game you’ll likely want to play through at least twice to see just how much the world can change.

NOTE: Yaga The Roleplaying Folktale is available on mobile exclusively as part of Apple Arcade, a premium gaming subscription service from Apple. Without being a subscriber to Apple Arcade you cannot download and play this game. Apple Arcade is $4.99 per month and does come with a free one month trial, you can learn more about it on Apple’s official website or by visiting our dedicated Apple Arcade forum.