Developer Capy’s Grindstone () has all the hallmarks of a typical free-to-play gem-matching puzzle game. It has a long, vertically scrolling overworld with over a hundred numbered stages to slowly make your way through, a lives system consisting of three hearts that you often have to replenish between matches, power-ups (some of them consumable) which are there to help you when you get stuck, and of course, the aforementioned gem-matching (although it’s monsters called “creeps” instead of gems or candy here). Scared yet? You shouldn’t be, because this is Apple Arcade we’re talking about. Outside of the $5 you already spent on the AA subscription, there’s literally no way to spend money in this game.

It feels kind of refreshing, honestly, because on the whole Grindstone is not particularly revolutionary and that lack of IAP breathes a bit more life into what could have been a pretty run-of-the-mill puzzler. Each stage is more or less the same: you start with a screen full of monsters, and you need to chart a path through them by matching the right colors. Each monster you slay will add to your score for the level, and once a certain threshold is met the gate will open and allow you to escape to the next stage. Eventually other wrinkles are added, such as beefier enemies that will attack you in specific ways and treasure chests that need to be unlocked. There are also the titular grindstones, which are prismatic gems that allow you to switch colors mid-path. 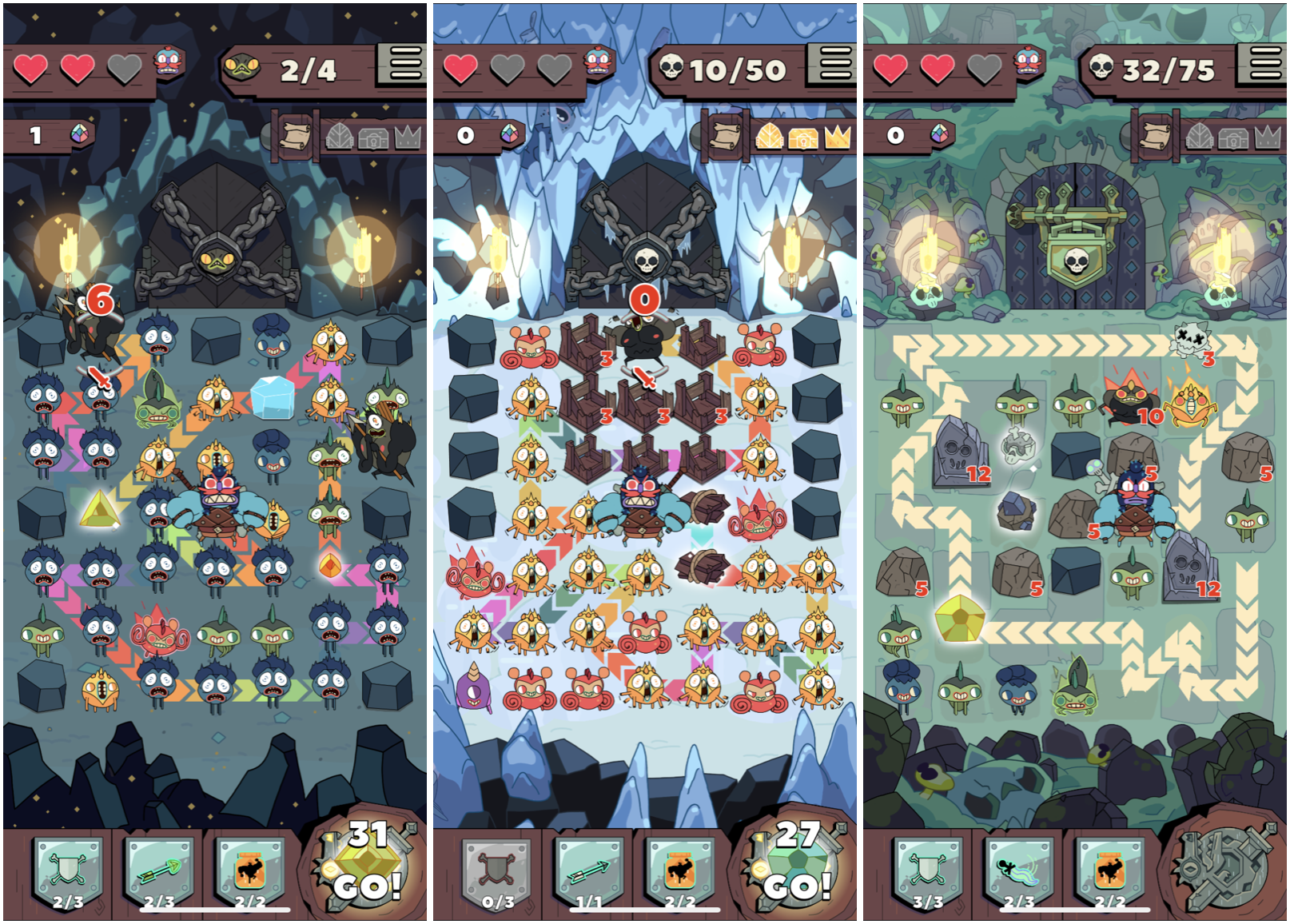 I say it’s not revolutionary because I’m pretty sure we’ve all played games with at least one of these specific mechanics before, and just a quick glance at some of the screenshots will probably remind you of dozens of games over the App Store’s 11-year history that it was clearly inspired by. Still, that doesn’t mean it’s not fun or worth your time, and Grindstone is absolutely both of those things.

To start with, the visuals are fantastic. It has kind of a modern Cartoon Network vibe with splashy colors, exaggerated animations, and just the slightest edge of adultness (which spellcheck assures me is a word) in its over-the-top gore. Seeing your character stomp and slash his way through enemies again and again is very satisfying, and the squishy sound effects are the perfectly gross cherry on top.

The level of challenge also feels right, although it took me a while to appreciate it. At first the stages felt a bit small and cramped, and it could be frustrating trying to find a long enough path to defeat certain enemies or reach the point goal to finish the level. But after a few minutes the board will almost always begin to fill up with grindstones and other special parts (which are also used as crafting material for better gear and power-ups) that allow you to make longer chains more easily. Despite my apparent bad luck at starting each stage without many options, I almost always managed to finish every goal without a lot of problems.

As for the goals themselves, there are (usually) three in each level: Opening the door, unlocking the chest, and stealing the Slob’s crown. The first is the only one you really need to worry about if you want to beat the stage and move on, but you will eventually need chests for crafting materials and crowns to unlock further stages down the road. It’s sort of like the Three Star system found in other games, where you don’t really need to go for all of them every time, but it’s a nice incentive for completionists.

In all, Grindstone is a very satisfying matching puzzler with an equally satisfying price. I do have my suspicions that the novelty of getting what is essentially an extremely free-to-play game but with all the predatory aspects removed might be coloring my perception and making me think it’s more compelling than it really is. Maybe in an alternative universe where the word “freemium” never existed and this exact game cost $5 I wouldn’t find it particularly special. But we don’t live in that world, and it’s hard to argue that the game doesn’t look cool and play really well. And it’s certainly very fun, with an insane number of stages to play through. If you’re craving one of these gem-matching puzzle games but tend to shy away from free-to-play stuff, I think you’ve found your new addiction in Grindstone.

NOTE: Grindstone is available on mobile exclusively as part of Apple Arcade, a premium gaming subscription service from Apple. Without being a subscriber to Apple Arcade you cannot download and play this game. Apple Arcade is $4.99 per month and does come with a free one month trial, you can learn more about it on Apple’s official website or by visiting our dedicated Apple Arcade forum.