Post-apocalyptic settings sometimes feel a bit old hat these days, but that’s just because everyone seems to pick from the same short list of world-ending disasters. Zombies, disease, nuclear war, environmental catastrophes, and technological failures have all been done to death, leaving behind the familiar husk of society made up of abandoned buildings and ragtag survivors living among the ruins. But what else is there to write about?

How about a planet so thoroughly destroyed by space dragons that survivors have to reside in spaceships and dive through the atmosphere to collect junk off the dragons’ backs?

It’s not an intuitive way to end the world, sure, but it’s a whole lot more interesting than the usual fare. EarthNight, one of the many new games featured on Apple Arcade, takes this unusual approach to the post-apocalypse and fashions an unusual blend of gameplay that tasks players with diving from space through a sky teeming with dragons in hopes of reaching the surface of the earth and finding some way to save the world. 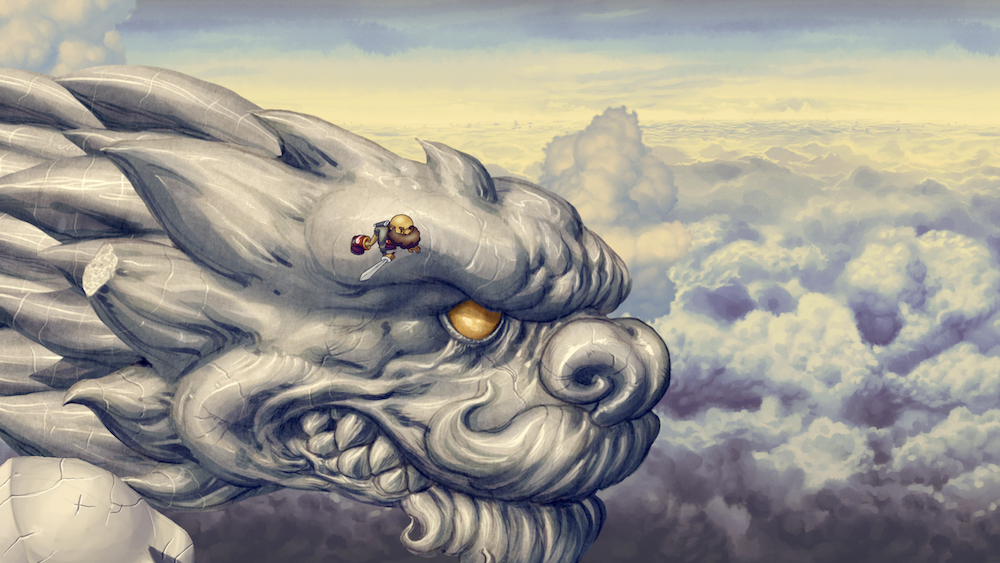 The game is an auto-runner, a genre which itself may seem old hat for a mobile game, but this one has enough tricks up its sleeve to breathe life into a genre that seems to consist mostly of Temple Run and Canabalt clones. While there’s certainly plenty of running you can do on the constantly-squirming back of the snake-like dragons, the best players will find ways to launch themselves skyward, bouncing off enemies’ backs and jumping from ledges to find greater treasures that will lead to more unlockable abilities. These runs culminate in battles at the head of each dragon you land on, with you trying to stab their craniums with the right timing to slay them before they shake you from their backs and deny you their much-coveted treasures that you gain from their defeats.

The abilities these treasures let you unlock can be game-changing. They range from simple increases in jumping power to the ability to deflect lasers and ride on the backs of tameable creatures. The more you unlock, the more the strategy of the game changes, keeping things fresh on each randomized attempt at reaching the surface.

While that might sound like the setup for a game that pads its gametime by forcing players to grind their way to victory, it never feels that way. There are no roadblocks that are impossible to pass without upgrades, and even the upgrades themselves offer multiple ways to unlock them — either by slaying the right dragons or by gathering enough treasure. While I certainly don’t have the skills to test it out, it feels like the entire game could be beaten with a single mistake-free run down the metaphorical gauntlet. 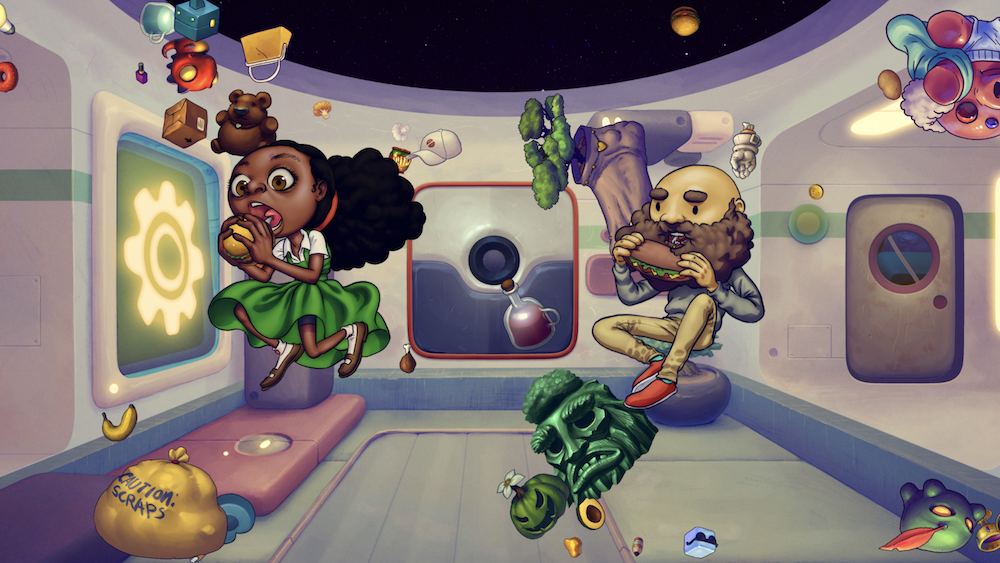 The spaceship that you return to in order to unlock these upgrades has a subtle level of character to it, giving players the opportunity to empathize with the two heroes who are tasked with saving Earth from the clutches of the dragons. It’s oddly serene, showing both characters performing mundane activities that you can’t help but feel allows them to cope with the catastrophe that took place miles below. It’s a wonderful example of how less can be more when it comes to storytelling, and it lets players fill in the gaps of the characters’ personalities in a way that allows them to step into their shoes.

In fact, what really makes this game stand out is the sheer amount of care that went into building up the personality and atmosphere surrounding the two player characters’ quests to save the world. There’s a tangible feeling of desperation every time they dive from their spaceship into the writhing mass of flying dragons below, giving a sense of weight every time you progress further towards the surface of the earth, and a sense of loss every time you fail and have to return to the ship and try again.

While progressing down through the different levels of the Earth’s atmosphere, the game makes the stakes feel more and more dire. A distant view of Earth with dozens of dragons standing in your way seems bad enough, but as you get closer it becomes clear that something is terribly wrong with the world you left behind. The view grows more and more unfamiliar and the names of the atmospheric layers stop matching up with what you learned in school and instead start sounding like descriptions of a wasteland that has nothing left for you to save. 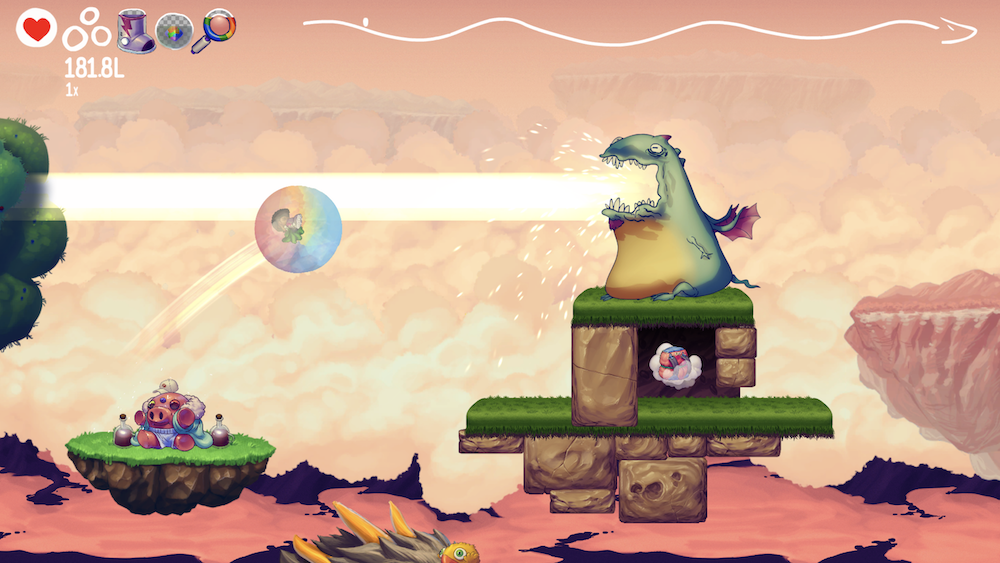 Helping along the experience is absolutely a colorful, vibrant art style that feels lovingly-drawn and brings out a lot of personality. For the most part, it works well with the gameplay, with the player, enemies and power-ups all easy to distinguish at a glance, which is a necessity with gameplay so fast-paced. There are a few times when things get a bit cluttered and a few others when some enemies are too small to easily notice on a small screen, but this doesn’t happen enough to detract from the high-octane experience. A bigger problem is the times when it’s
impossible to tell what lies above or below you, making it hard to judge when to jump up or fall down to make it through a level with all the health and collectibles you’re looking for.

While none of the music in the synthesized soundtrack stands out as particularly excellent, it works well with the gameplay, alternating the tone seamlessly between the somber and action-packed portions of the game. It sets a bit of a retro tone to the game as well, calling back to arcade games from the 90s that seem to be part of the game’s inspiration.

Unfortunately, the game’s controls mar the otherwise well-crafted experience. To be specific: the developers seem to have forgotten that they were releasing the game on a mobile device, which has more control options than just tapping different parts of the screen. Choosing whether to dive, dash or double-jump midair could be made easy by assigning each to a different swipe or gesture, but instead each separate move is assigned a different small, easy-to-miss segment of the screen that you have to tap to perform. It’s a scheme designed for a controller, ported
clumsily to a mobile device without much consideration for what the devices are capable of. Thankfully, iOS 13 lets you connect PS4 and Xbox One controllers, which completely negates any of the control problems, but that’s a crutch that the game should not need to rely on.

EarthNight is a game that could have been amazing, but lets a few failings knock it down from the heights it might have reached. Instead, we’re left with a really good game — one that shows the inventiveness and imagination of its creators without quite reaching the level of greatness that was well within their reach.

NOTE: EarthNight is available exclusively as part of Apple Arcade, a premium gaming subscription service from Apple. Without being a subscriber to Apple Arcade you cannot download and play this game. Apple Arcade is $4.99 per month and does come with a free one month trial, you can learn more about it on Apple’s official website or by visiting our dedicated Apple Arcade forum.