Not content with a single Summer event, Dragalia Lost today introduced Part 2 of the Summer event. The “A Splash of Adventure" raid event has made way for the “A Crescendo of Courage" facility event. It’s designed to make good use of your Light-attuned teams, but certain staple characters like Albert might not appreciate the prevalent use of Curse in the difficult fights ahead.

This event carries on directly from the last, so knowledge of the story there will certainly help hype this one up. Like past events, A Crescendo of Courage brings with it an identically named summon banner with a handful of classic characters getting their swimsuits on for the adventure.

A Crescendo of Courage kicked off on Tuesday, August 13 for the masses and is set to end around eight days later on August 22. An extra Nightmare boss battle unlocks on August 16.

As usual, expect rewards to remain redeemable for around a week following the conclusion of the event.

The second leg of Dragalia Lost’s summer adventure brings with it a second set of classic adventurers donning their cute and colourful swimsuits. It’s everything a Dragalia Lost fan could want for the game’s first summer outing.

This time, it’s the bashful Cleo, excitable Luca, and graceful Verica taking the plunge and getting their swimsuit on, with the last event’s new gatcha dragon, Siren, making her encore appearance in her event-specific outfit.

Every new summon is Light-attuned for this banner except for Verica, who switches her usual Flame-attuned healing prowess over to the Shadow element with this one.

The banner itself contain two 5* adventurers, one 4*, and a second 5* Siren.

A Crescendo of Courage Story 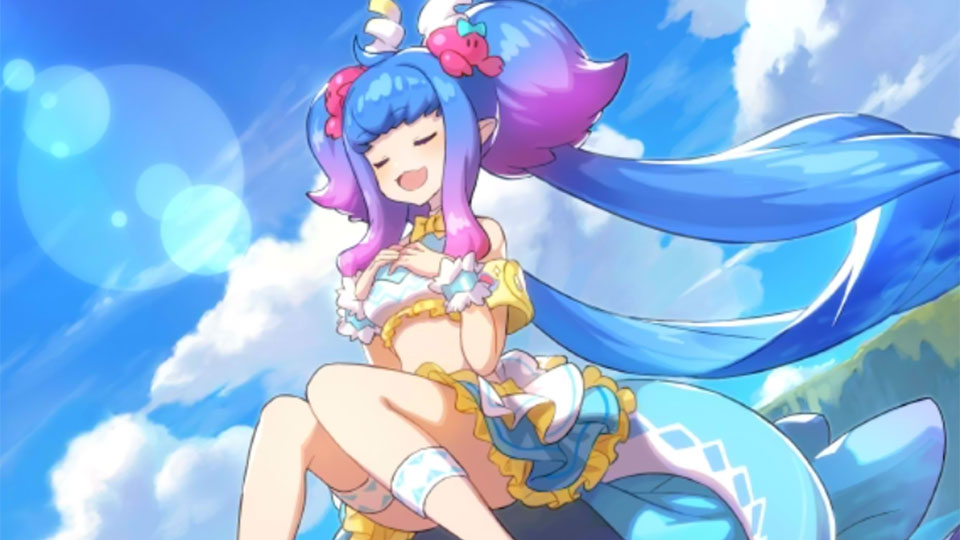 Having used her voice to distract Barbary long enough for Eugen and his Halidom friends take out the maniacal pirate, Siren asks for something in return – a spectacular concert with her as the headlining act. Elisanne and the boys work on setting up a stage while Siren, Verica, and Cleo head out to nearby towns to market the big performance.

The townsfolk all scream in fear at the sight of Siren as legend of her mind-melting song has already made the rounds. Putting on a brave face, Siren heads back to the Halidom, putting on a solo show for herself and her friends – those who know her lyrical notes do nothing but soothe the soul.

On the day of the concert, however, the crowds charge in having heard her inciteful voice from the night before. All the while, the kind and reassuring words of wisdom from her friends encourage Cleo to cut loose and swap her royal attendant robes for a gleefully girlish swimsuit and take to the stage with Verica as Siren’s back-up dancers.

But Siren’s tones have brought more than just patrons to the castle doors. As a horde of fiends gate-crash the big performance, Luca and the others manage to turn their defense into an opening act, rilling up the crowd before Siren’s big performance.

Siren comes to terms that her days singing alone at the bottom of the ocean are over and that people do, in fact, love her and her music. Cleo, on the other hand, learns that it’s ok to let your guard down and have a bit of fun from time to time – lest your prude and uppity nature cause you to miss out on some of the most enjoyable aspects of life.

A Crescendo of Courage – Loot

Being a Facility event, obtaining loot works a little differently than the last Raid event. Rather than fight the various bosses and earn cumulative rewards that way, this facility event gives you the choice of which prizes to redeem for – if you have enough of the specific tokens to trade for, at least. Various kinds of tokens are dropped as loot from event battles. These can be increased by equipping new wyrmprints with the correct Event Perk.

Loot remains similar to past events. There are the usual upgrade materials like mana, rupies, and weapon tablets, and more limited rewards like Twinkling Sands and Champion’s Testaments. You’ll want to focus on redeeming these rarer rewards before trickling down to pick up the rest.

Each event quest you clear awards “Hype”, which offers cumulative rewards as your total increases. Rewards, again, include Adventurer, Wyrmprint, and Dragon upgrade materials, but can also dish out Summon vouchers as key intervals. There’s even a full Golden Key upon reaching one million Hype.

Most of your time in the A Crescendo of Courage event will revolve around upgrading the event-specific facility. Rather than increase the stats of any adventurer attuned to the specific element, this one increases Bow and Dagger users. During the event only, it also increases raw damage output of Light-attuned adventurers by a maximum of 200%.

You’ll want to cap it out as soon as possible to have the best chance of clearing the harder event quests and speeding up the path to additional rewards.

Upgrading the facility and earning Hype and Treasure Trade rewards means collecting lots of different tokens. New event-specific wyrmprints can help here by increasing the number of select tokens which drop at the end of each event quest. A few of these can be had through quick and easy Treasure Trades, while the rest must be bought through the Wyrmprint shop or earned through Hype rewards. The more of these you have unbound and equipped to your adventurers, the quicker you’ll earn the rest of the rewards.

Certain early event quests are locked until your facility hits a certain level. This means you’ll want to farm Glam Shells from the “A Fiendish Performance” quest until you can upgrade it to around level 10. Don’t be afraid to use a little wyrmite here to speed things along. You get enough from a single first clear reward to cover it all the way to level 10.

After that, work your way through the different difficulties until you hit the point where you absolutely need the higher facility to continue. Pick up wyrmprints to speed things along and either farm until you have enough Glam Shells to cover the upgrades for the rest of the event, or just grab them as needed to keep it constantly under construction. After that, keep running the Can’t Stop The Beatdown quests with the wyrmprints to max out your Hype and grab plenty of tokens.

If you max out the rewards before the end of the event, turn your attention to clearing the Master difficulty to have a chance of earning rare upgrade rewards and 5* base weapons useful for crafting powerful elemental weapons further down the line.

The first leg of boss battles you’ll encounter with the A Crescendo of Courage event, A Fiendish Performance pits you against a single wave of fiends with an Ent fiend in the centre. It’s similar to past uses of the Ent fiend and shouldn’t offer much of a challenge. Just beat the smaller fiends down if they’re distracting you from the main prize.

This is the Extra (EX) version of the A Fiendish Performance boss battle. This has a chance of appearing after each succesful clear of the aforementioned stage. It doesn’t differ a whole lot from the regular mode, so the strategy remains roughly the same. Just expect creatures to hit harder and take more of a beating. Rewards will be exponentially higher than the vanilla version, though, so it’s a great thing to aim for – and an even better reason to collect lots of event perk wyrmprints.

The main allure of Facility events outside of the facility itself, the Challenge Battle is where the biggest Wyrmite prize lies. By clearing the 7000 Might version, you’ll unlock the 12,000 Might variant, which rewards a whopping 500 wyrmite when cleared through an endeavor.

Like past Facility Challenge Battles, this is a 5-Wave gauntlet that requires a proper strategy. Most teams will want to get the Facility up to at least Level 20 before expecting to clear this. Even at 12,000 might, the damage boost offered by the Facility is almost a necessity.

Waves will spawn in the same positions in each run, so research these spots and time your attacks accordingly to dispatch waves before they manage to disperse. Having access to Annalie as a Helper is great for this.

It’s all about getting to the final wave with as much time to spare as possible. Then it’s a case of clearing out the first set of enemies surrounding the tree before working to push it into Break, allowing you to remove a chunk of its HP while it sits there immobile. It’s attacks are easy enough to avoid, but don’t be affair to transform to avoid any bigger strikes.

New to this kind of event is the Nightmare difficulty. Designed to challenge those who’ve already far surpassed the Might suggestion of the current Challenge battle, Nightmare is for the truly hardcore Dragalia Lost veterans and shouldn’t be taken lightly.

Can’t Stop the Beatdown: Nightmare unlocks on August 16 and can only be challenged after clearing the Can’t Stop the Beatdown: Master battle. Unlike that one, you’ll only gain rewards for clearing the entire thing, rather than being able to cash out on the fifth wave. Clearing Nightmare will reward a single rare item from the Grand Bounty each day, which usually consists of high-tier upgrade materials like Twinkling Grains, Sunlight Ores, and Damascus Crystals.