Straight after the summer Gala Dragalia banner comes a fresh new Raid event – A Splash of Adventure. We’ve covered the basics of this event in the reveal post over here, but now that it’s in full swing, it’s time to etch out strategies and show you how to make the most of it.

Unlike the Flames of Reflection event just before it, A Splash of Adventure is a Raid event, meaning one massive 16-player boss battle rather than a grind of solo gauntlet-style brawls. That means there’s no new facility to work on – but there is a new character (or skin) to befriend before the event ends.

A Splash of Adventure kicked off on July 31 and runs for around two weeks – until August 13. Some of the content is locked between these dates, so don’t worry if you’re wondering why you can’t tap into some of the locked adventures straight away.

As usual, expect reward exchanges to stick around for a week after the event ends, and the conclusion to the story playing out as soon as the fighting stops on August 13. 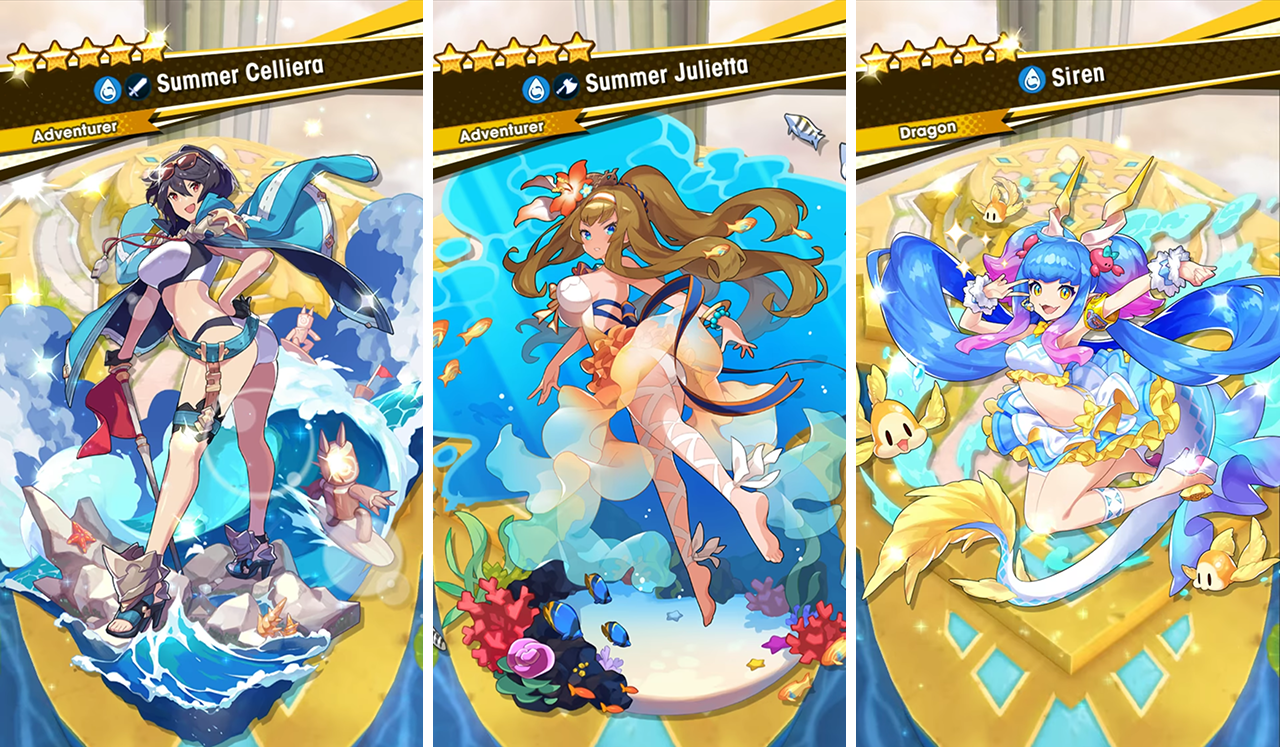 Welcoming the summer sun, the A Splash of Adventure event brings with it a matching summon banner. And it’s the arrival of the long-awaited swimsuit summons. That’s right, a bunch of Dragalia Lost’s classic characters have put on their swimsuits ready for their beach adventure. Many of their elements have swapped over to Water for this, but they’re still ready a rearing to pack a punch in combat. Other water adventures (like Thaniel) have boosted rates, too. 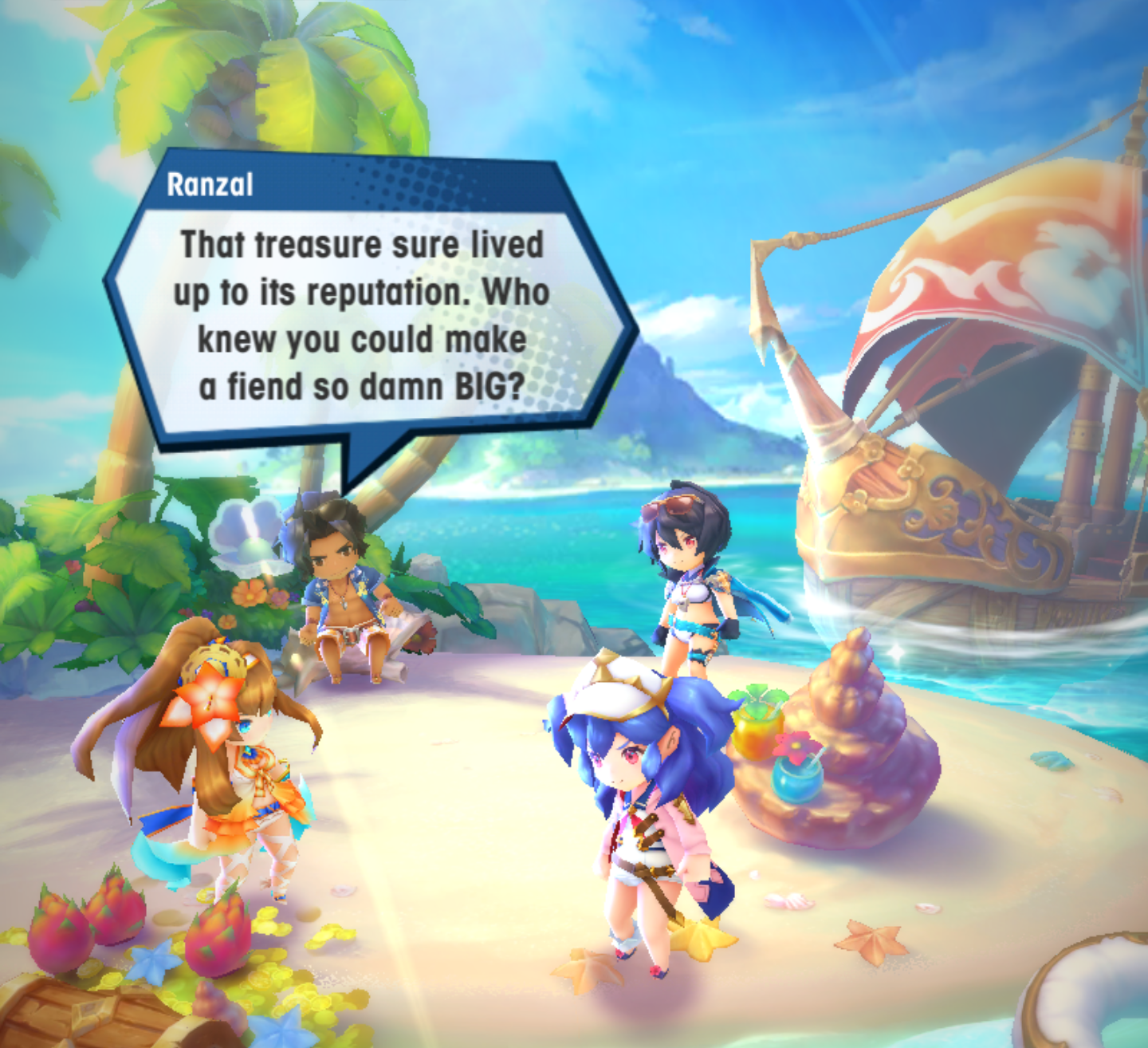 Being his delightfully naive old self, Luca arrives back from a simple trip with a treasure map in tow. He’s hyped up and ready to go hunt it down, but the rest of the crew in the Halidom at the time are a tad more apprehensive, doubting a treasure map allegedly found on Lewis Island beach and simply handed out by a mysterious antiques dealer is anything but sketchy. Eventually convincing the team to use it as an excuse to go for a summer excursion, they all head off to Lewis Island.

Before long, a commotion begins to brew on the island paradise. After checking it out, the team find Verica to be at the center of it all, who stopped by on her own fortune-telling trip to take them up on their initial invitation. After subduing a crowd riled up by her revealing swimsuit, Verica’s fortune-telling prowess warns the group of danger – and how to combat it should the vision come to pass.

Lo and behold, the ongoing search for treasure leads half the group to a cave housing Erasmus, a dragon once bound to Simon, the creator of the map. Eramus explains the treasure is, in fact, a powerful artifact capable of twisting a person’s mana. They eventually find the treasure hiding under a rock when Barbary, a selfless pirate, shows up to swipe it, turning her into a Kraken-like monstrosity.

Using Verica’s foresight, the team use an Otherworld Fragment found on a nearby fiend to trap Barbary in the space between worlds and eventually recruit Siren, a cast-out dragon with the voice of an angel, to lull Barbary away from the fiends supplying her with a dizzying amount of munitions so that the rest of the team can deal a finishing blow.

The story continues on August 8. 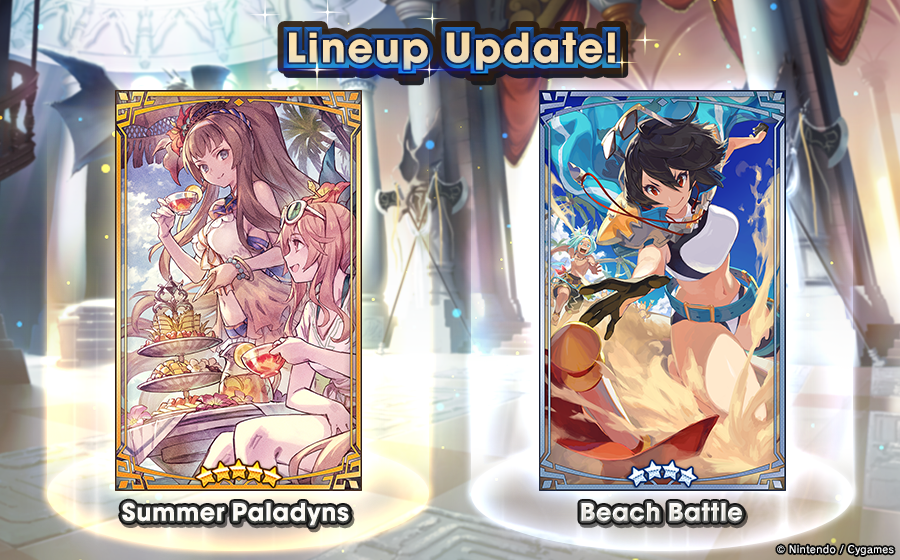 There’s plenty of loot to obtain throughout the A Splash of Adventure raid event. A new wyrmprint (Preacher’s Vacation) can be obtained through the story quests and Blazon summons, while two more can be bought through the Wyrmprint store. These don’t run any specific Event Perk skills to speed up progress, but they can fill in for other prints like Kung Fu Masters.

Endeavors encourage you to grind out event quests for easy Wyrmite, while the Blazon summon box contain Erasmus, the Flame-attuned dragon featured early on in the event story. Erasmus isn’t the best Flame dragon in the game, but it’s not a terrible choice for those lacking any of the more meta picks.

Broze, silver, and gold emblems obtained by completing the various event quests can be tallied up upgrade/crafting materials, eldwater, wyrmprints, and additional summon vouchers. Higher tier event quests themselves have slim chances to drop golden key fragments and twinking grains among the low-tier upgrade materials like orbs, water, and whetstones.

The first event boss battle should be a walk in the park for anyone. Giant Ember Toad Assualt is available in Beginner, Standard, and Expert difficulty levels with 2000, 3300, and 5200 suggested Might respectively. As you’ll have guessed by the name, it’s a Flame-attuned creature, meaning you’ll want to bring your Water adventurers to deal with it quickly.

Giant Ember Toad does very little to truly threaten you. The fight starts with it surrounded by smaller toads. Players with a high Might team can ignore these and just go for the kill, but less experienced players should focus these down while avoiding the Gaint Ember Toad’s roll attacks. Soon, additional enemies spawn – like mushrooms. Either knock these down – while avoiding the small AoE attacks they do – or focus on the boss.

This a quick and easy quest to farm for two things – Otherworld Fragments needed to challenge Barbary, and friendship points needed to keep Summer Estelle on you team after the event ends.

The event’s main attraction; a 16-player raid battle against an enlarged and enraged Barbary. Like the boss battle prior, Barbary Clash comes in multiple difficulties: Beginner, Standard, and Expert with Might requirements of 2100, 4000, and 7800 respectively. You’ll need Otherworld Fragments to run these quests, but the harder Barbary Clash EX fight unlocked randomly after an Expert clear does not require fragments.

Those looking for a true challenge can take on Barbary Clash: Nightmare when it unlocks on August 2. The below guide is based on the EX version of the fight, but the principle strategy can be applied to the lower difficulties

Barbary uses lots of relatively small AoE strikes to catch stray players off-guard – she can jump up and slam the area beneath her and also rush forward like many other bosses. These can both be dodged with skills if needed. You’ll generally want to avoid her front two tentacles to dodge these small slaps, but all four can be broken for additional loot and to stop her more vicious attacks. Before then, she can bury all four and have them burrow back up around the arena to surprise players.

Once she hits Overdrive state, Barbary will drop two large bombs on two opposite sides of the arena , limiting available space (unless you’re brave enough to use this space before the long fuse ticks down). After recovering from Break, Barbary summons multiple large fire cyclones around the arena which quickly tick for decent damage. These also summon lizard enemies you’ll generally want to take care of for some extra loot.