As Nintendo continues to get over its “mobile games are icky" phase and go all-in on embracing the massive install base of phones and tablets, it’s been pretty slick so far at picking IPs that make sense for casual gamers. Dr. Mario World (Free) is certainly in that vein, and as an added bonus (or not, depending on how worn out you are on the genre), it really embraces the long history of match-3 games on mobile.

Then again, the original Dr. Mario was way ahead of its time and just one extra tile ahead of the match-3 craze anyway, so it totally makes sense. In this case, your job is still the same — to eliminate nasty viruses through the power of matching — but the gameplay is inverted. Instead of capsules falling from the top of the screen, you float them onto the board from the bottom up. The simple touch and tap mechanics mean you can do some pretty nifty stuff instead of just accepting your fate when you don’t get the capsule you want at the right time.

But I’m getting ahead of myself here. Our Dr. Mario World guide will lay out the basics to get you started and give you some tips and tricks to tackle the even tougher challenges that await ahead.

The Basics: How to Use Capsules to Eliminate Viruses

The goal of every Dr. Mario World single-player level is the same: To eliminate a certain number of viruses.  Because Dr. Mario has access to the best anti-virals around, all you have to do is match three or more of the same color capsules and viruses in combination to remove them from the board. Any combo will do: two viruses and half a capsule, one virus and a full capsule, three capsule halves, etc., but at least half of one capsule needs to be involved. A completed match removes everything involved it in from the board, but if there’s half a capsule that isn’t part of a match, it will then float up toward the top once the match is finished. 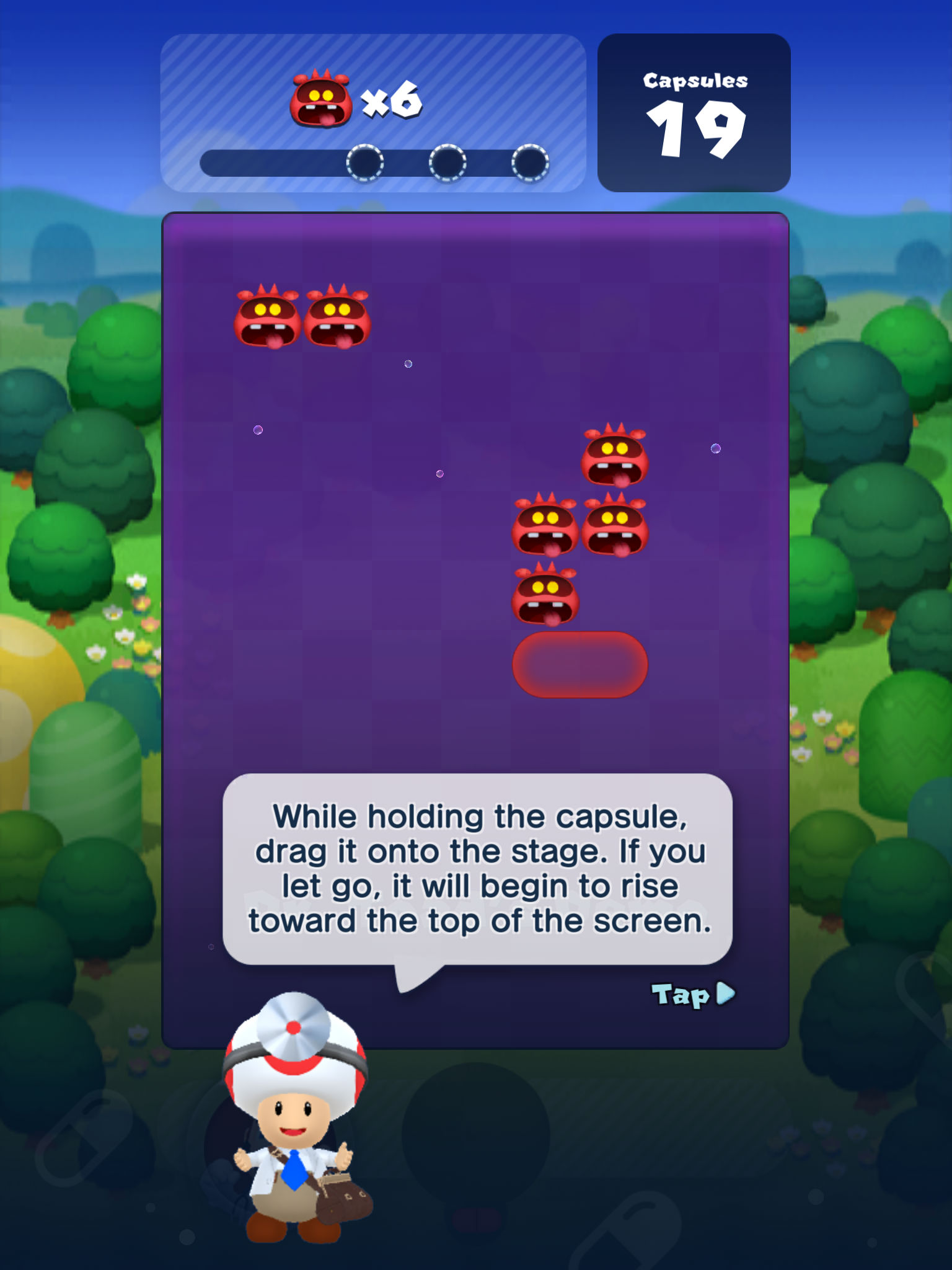 Yes, I said float, because unlike most match-3 games, the capsules appear at the bottom of the screen (where you can see what is coming next) and slowly float toward the top. While doing so, you can tap to rotate the capsule a quarter-turn per tap. You can also hold on it to slide it side to side or hold it in place. You can even move it up toward the top of the screen faster than it would get there on its own, though you can’t ever move it back down. Once a capsule has reached a certain row of the board, there’s no going back.

Bonus tip: The ability to freeze a capsule in place is more powerful than you might imagine. Why? Well, if you know the next capsule is better than the one currently on the board, you can effectively switch their order by holding and freezing one in place while the other one floats up. It takes some practice to use this technique effectively, but it’s super helpful once you have it down. Just remember that you can only hold or move around one capsule at a time.

At the top of the game screen, you’ll see both the number of viruses you still have left to clear and the number of capsules you have left to accomplish their extermination. If you don’t clear all the viruses before running out of capsules, you’ll fail the level, at which point your choice is either to start all over again from the beginning or to continue with a few more capsules by paying Diamonds, the game’s premium currency. Note that you can only continue once. 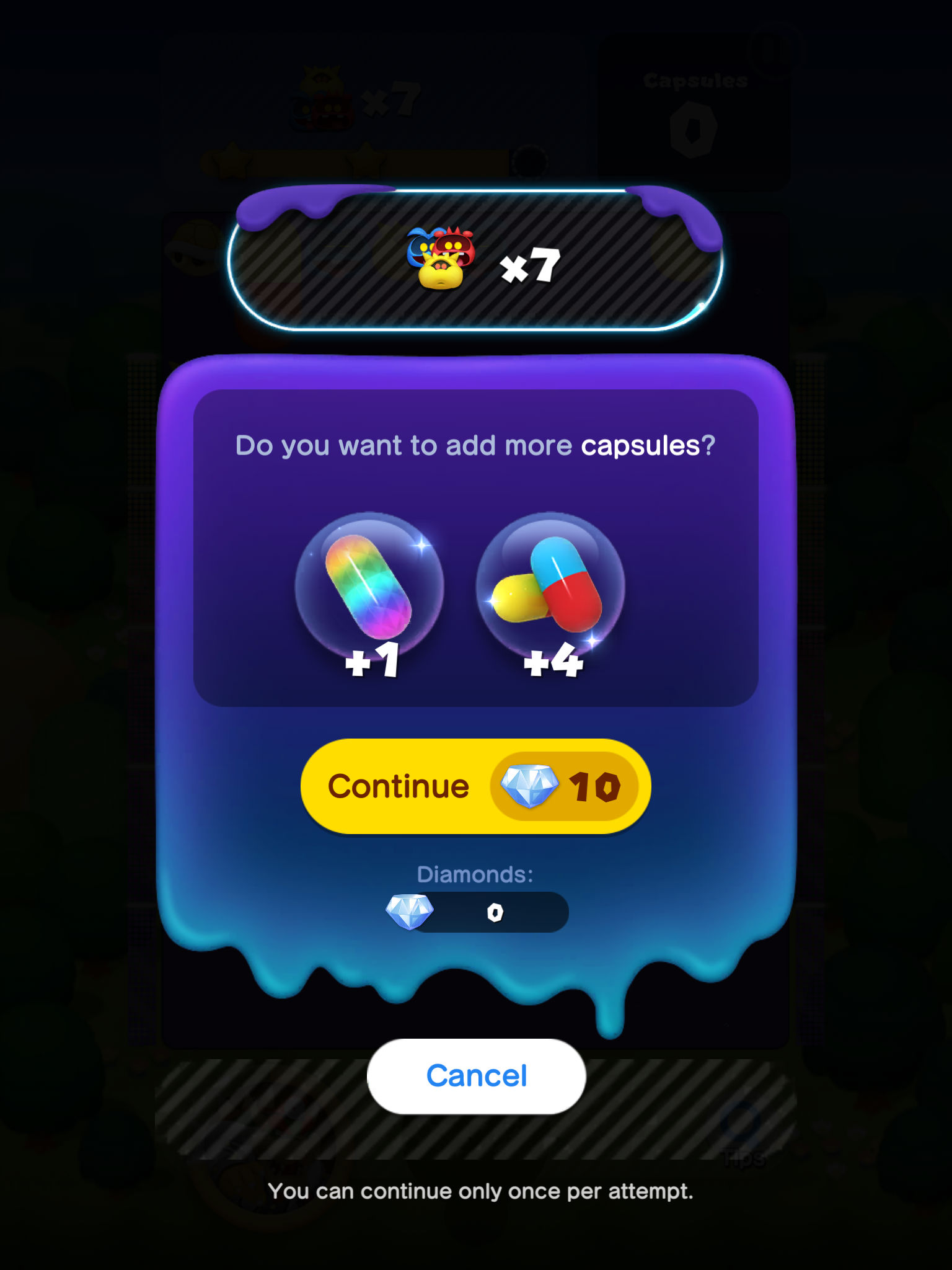 Any time you start a level after level 20, you’ll use up one heart — you can find your current amount of hearts (up to five max) in the upper-left corner of the main game screen. If you successfully complete a level, you’ll often earn one heart back, so all is well, If not, though, you’ll have to use another heart to either restart or play a different level. Hearts do replenish at the rate of one every 30 minutes, and you can also use Diamonds to buy them. But we’d rather answer another, very related question …

How Do You Get Free Hearts in Dr. Mario World?

There’s one very simple way: Ask your friends for hearts. Of course, that requires you to have friends also playing Dr. Mario World, and there’s not much we can do to help you there.

Actually, that’s not entirely true. If you decide to link a Facebook account, you can automatically pull in all of your friends who are playing the game and have likewise opted in. Bam, instant friends list. 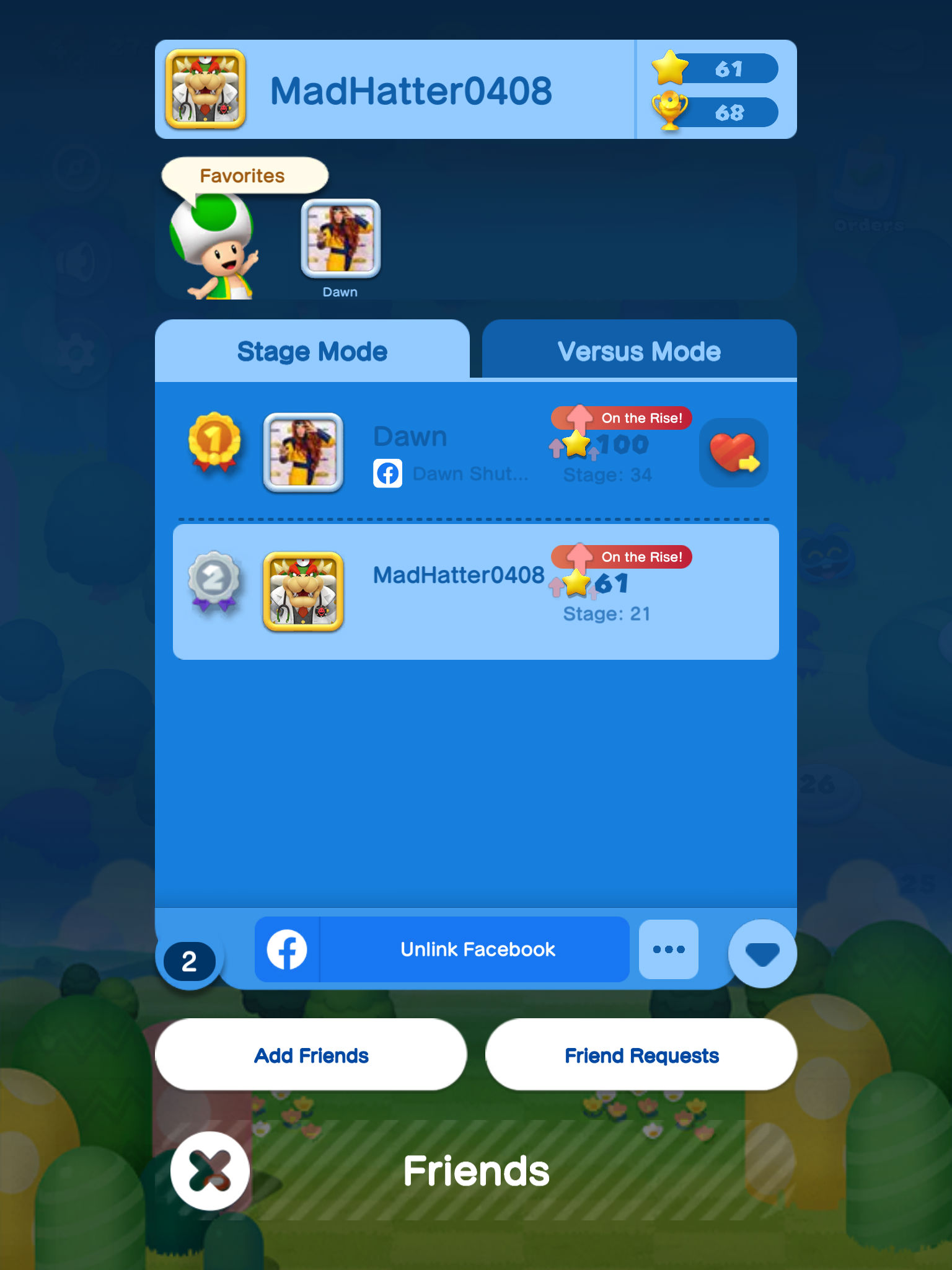 You can only send a friend a heart and receive one in return once per day, and the gaming day switches over at 11 p.m. PT.

Playing in Japan, Thailand, Taiwan or Indonesia? You’ll need to use LINE instead of Facebook, but everything else regarding free hearts remains the same.

How to Get More Characters — Doctors and Assistants

Apparently they are just handing our medical degrees left and right in Mario’s world these days, because you don’t even necessarily have to play the game as Dr. Mario. As of launch, there are 10 different doctors you can use as your in-game character, along with 32 different assistants.

The choice of doctor is more than just cosmetic. Each doctor has a different skill, which can be activated once the skill meter fills up, either by making matches or clearing special skill charger items (that look like little energy drinks) off the board. The portrait of your doctor will flash when your skill is available, and you simply tap it to use it.

Assistants, as you might guess, have a much more limited role. They grant bonuses in both single-player and PvP, but they don’t have their own active skills or anything that involved. You can equip up to two assistants at one time. 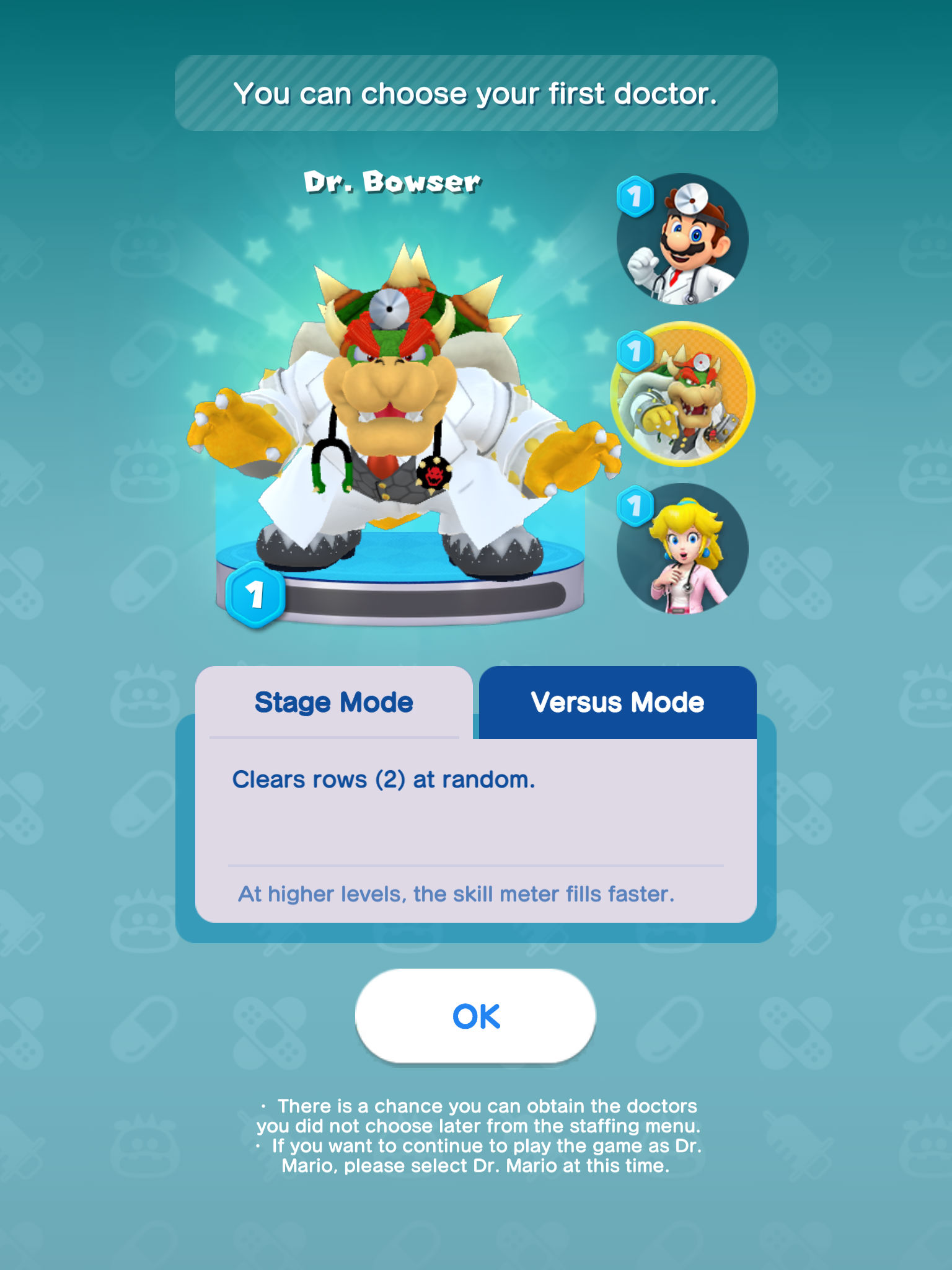 By simply playing through the game’s first 20 levels, you’ll be able to pick your first doctor (which can be Mario, if you’re a steadfast traditionalist). To unlock more doctors, you’ll have to head to the ‘Staffing’ screen by tapping on the newspaper-esque icon at the bottom of the main screen. There you’ll find a Toad more than willing to sell you some gacha chances at new doctors or assistants. 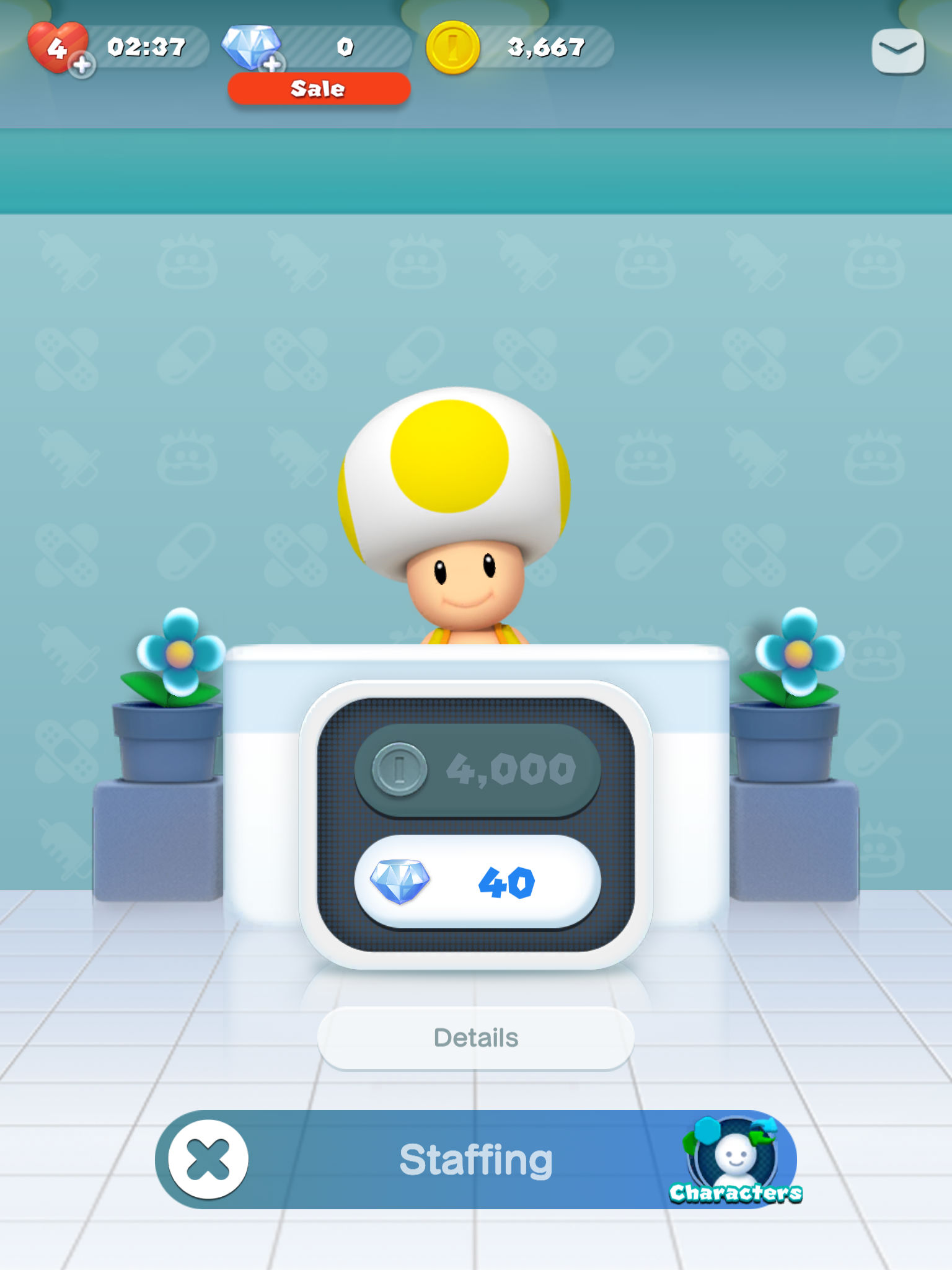 To get a character, either a doctor or assistant, you’ll need to fork over either 4,000 coins or 40 Diamonds. Each time, you have a 20 percent chance of getting a doctor, and at the time of this article, the odds of getting any particular doctor were all identical. Should you draw a character you already have, his or her skill level will increase instead, and once they hit their maximum skill level, they will be removed from the gacha pool.

This is another good chance for a silky smooth segue, because if you want more coins to get more characters, that’s a directly related topic.

How to Get Free Coins

Coins are a staple of pretty much anything Mario, and along with chances to unlock new characters, they can also help you directly in your quest to clear more levels as you can spend them on power-ups. But you’ll need more coins to do all that spending, and happily, there are several ways to earn more for free: 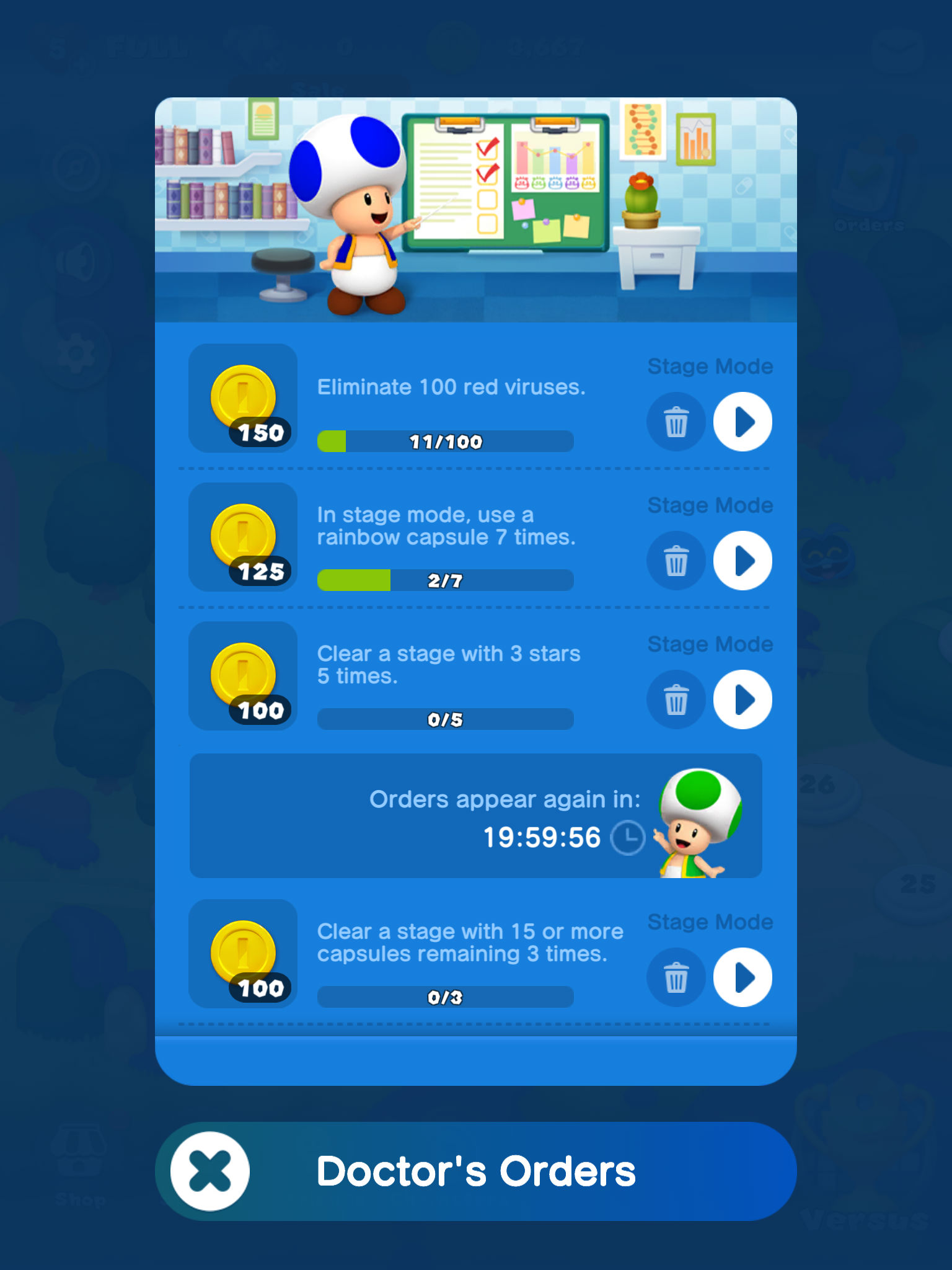 Versus Mode: A Brief Overview of PvP Play in Dr. Mario World

Fancy some real-time head-to-head play in Dr. Mario World? That’s actually a thing in the aptly named Versus Mode.

Versus Mode battles offer the same basic play as a solo level, with the addition of the twists added by another player working on their own board full of viruses at the same time. As you clear viruses, you’ll start to fill an attack meter under your doctor above your board. At the same time, your opponent is busy clearing their own viruses — you can check on their board in real-time as it’s displayed in mini fashion to the right of yours, and their attack meter is also up top. 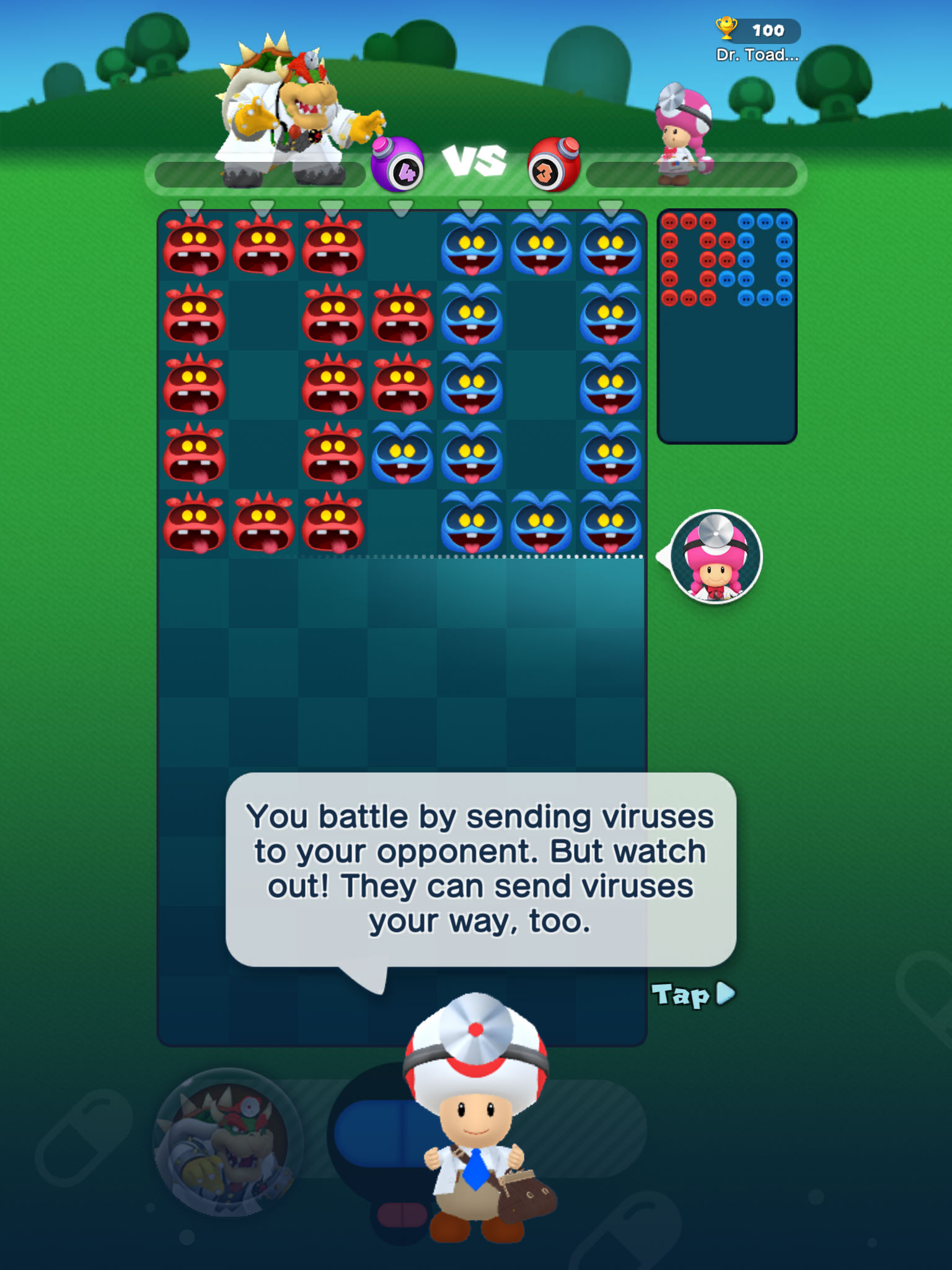 Whenever an attack meter is filled, it will dump viruses onto the opposing player’s board. The number of rows of viruses (which always arrive in inconvenient color patterns) depends on a doctor’s attack rating. There’s also a chance the doctor may fend off an incoming attack, which is higher with a better defense rating.

As both players clear their boards, the playing fields will shrink from the top down. Battles end when one player either has their entire board squashed or can no longer play capsules into the space remaining.

Winning a battle earns battle points, while losing one deducts some instead. Earning enough battle points will eventually move you up to the next tier, with better rewards possible from each victory to go with some bonus loot when you first reach that tier.

The most important thing to remember for Versus Mode is that doctors and assistants affect play differently than in single-player mode, so you may want to set a different roster for both modes – and the game allows you to do exactly that. Be sure to get familiar with the stats and skills of all your characters so you can set a Versus Mode lineup that suits you best.