What do you get when you mix a developer with a history of solid rhythm games, a chiptune soundtrack, and over a hundred compact puzzles? Bumpin’ Dungeon (Free), of course! With Moby Pixel’s history in rhythm games, a puzzle game isn’t exactly a natural successor. That said, the blend of retro graphics, upbeat soundtrack, and quirky atmosphere feel as natural in Bumpin’ Dungeon as they do in Synthwave Escape, and the more relaxed gameplay is a welcome change of pace.

Players will guide Hanny, our intrepid dungeon delver, as she plumbs the depths of a dungeon in search of an exit, loot, and (most importantly) delicious pastries. Such an auspicious quest is not accomplished easily, though, and each floor harbours traps, locked doors, and malicious monsters who want no more than to catch those who dare invade their dungeon. Fortunately for our young protagonist, escaping a room is quite simple: Just find the door and leave. What could be simpler? What about the monsters, traps, and puzzles, you ask? That, dear reader, is where the fun comes in. 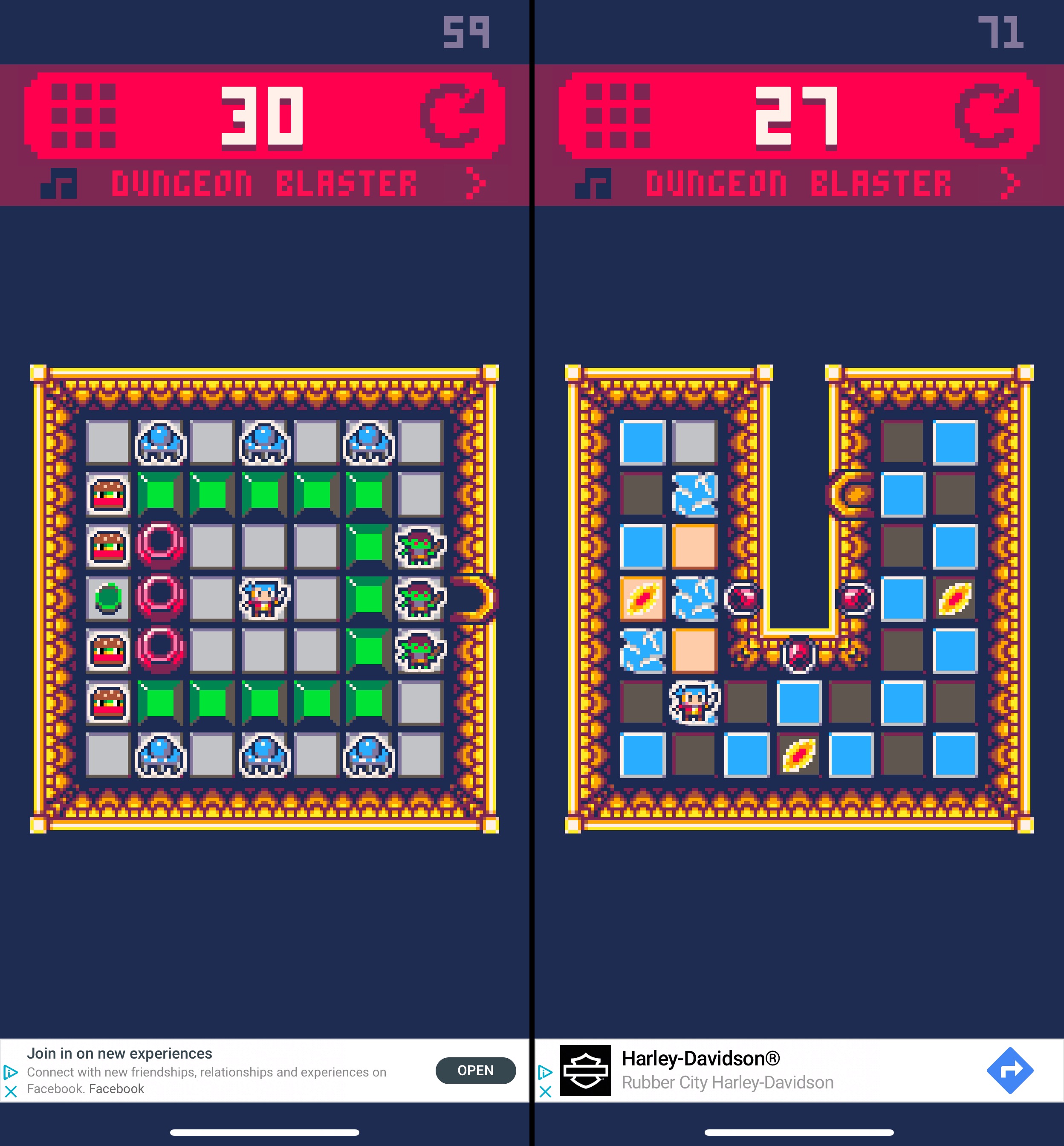 See, solving some rooms really is as simple as just walking through the open door, most doors are actually locked and require activating some number of tiles or flipping a button; or perhaps they are unlocked, but getting there may require knocking a number of monsters off the playing field, or dodging around until you can safely walk by or lock them away. Moreover, there are a variety of environmental hazards to worry about, like spike traps, ice patches that collapse into an endless void if you cross them too much, or fireball-flinging walls that should really settle down and just be normal walls. Oh, and then there’s the move limit. If traps, monsters, and puzzles weren’t enough for you, each level has a maximum number of moves that can be made. Run out and you’ll fail, make it early and you get a pat on the back.

While the normal hazards can be dealt fairly easily given enough time, the move limit really complicates matters. Suddenly, rather than taking the long, safe path around the edge of the room, you instead have to hit the button to pass through the middle where, quite conveniently, all the goblins, crabs, and squid are locked up. Can’t get through without hitting the button, but hitting the button adds another layer of complication to the mix. If that all sounds incredibly difficult, though, take a breath and rest easy. Most solutions are fairly obvious and, even if one isn’t, most levels have several solutions. If you don’t hit on one, you’ll probably stumble upon another.

Regardless, players should be prepared to die, and die freely, since the only punishment is to reset the floor. If a floor is simply too difficult, however, you can opt to watch an ad and skip it, or pony up $2.99 to remove all ads. Since there are no ads between levels, no forced ads on death––really, no forced ads at all––this is purely optional. The only ad of note, in fact, is the (quite small) banner ad on the bottom that changes from time to time. Since puzzles are so small and take place in the middle of the screen, it has no impact at all on gameplay, and is almost entirely unnoticeable. In truth, Bumpin’ Dungeon is far too kind to its players. 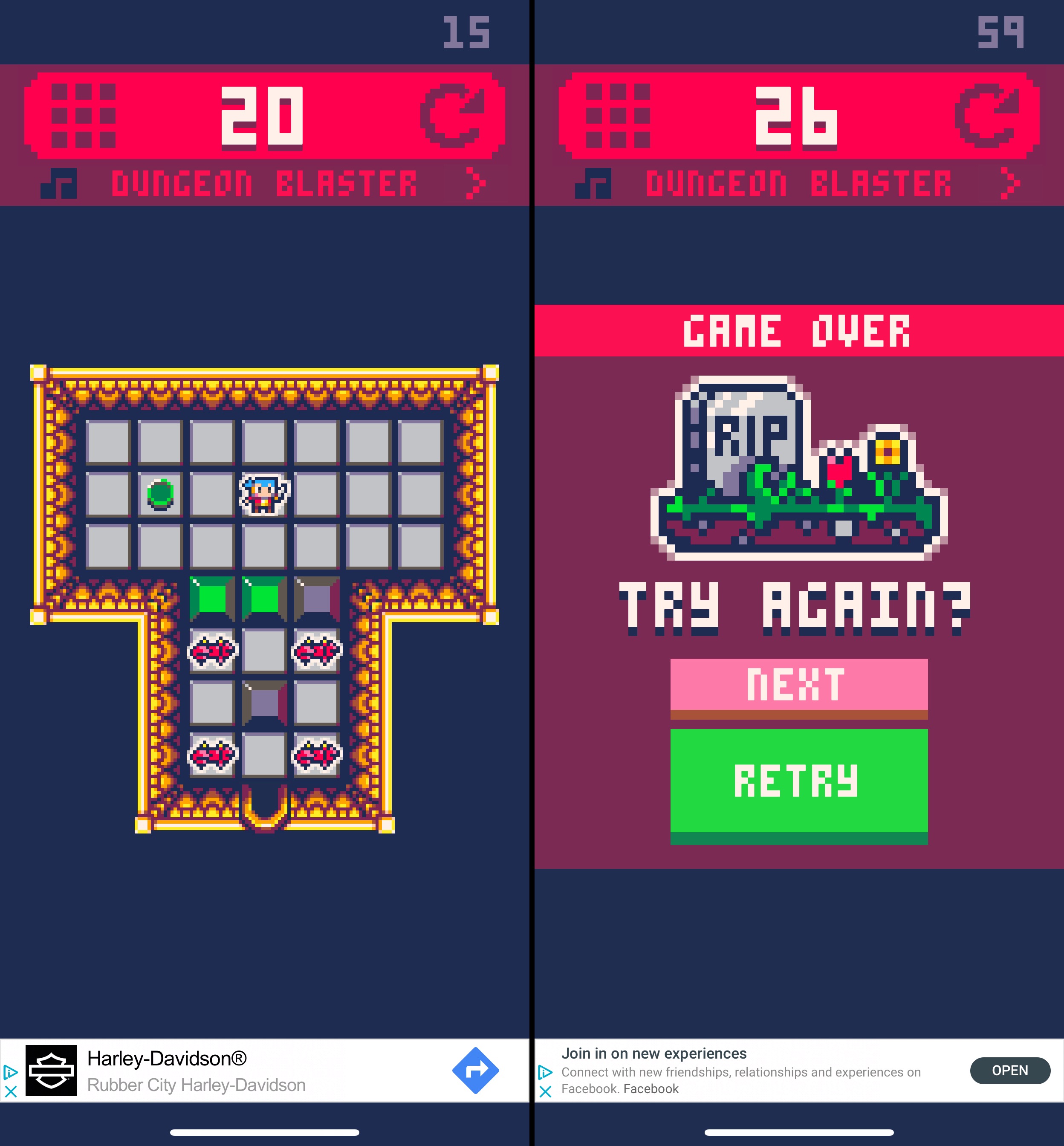 So the level design is neat, it’s not super difficult, and the monetisation is ridiculously player friendly. What about the visuals, the soundtrack, the overall feeling of the game? Well, I’m glad you asked! The visuals (as you may have seen from the screenshots) are delightfully retro, each and every sprite is colourful and lovingly made, and the environments themselves include a variety of hazards that lend a certain flair, as well as the obvious challenge to overcome.

The soundtrack is a wonderful set of upbeat tracks inspired by a variety of game elements (mostly monsters), featuring charming names like “Jiggly Bones,” “Dungeon Blaster,” and “Gerblin Bro Hug.” While I’m not sure how into hugging a gerblin is, each and every track fits into and emphasises the carefree joy of a good dungeon crawl. More than that, though, it is hard to not feel encouraged listening to one of these tracks so, no matter how difficult a level may be at any given time, it’s no great trouble to give it just one more shot, or come back after giving it up for a day or two.

In fact, that is perhaps Bumpin’ Dungeon’s most defining feature: From floor one, everything––monsters, Hanny herself, the soundtrack, the floor design––is geared towards a certain upbeatness, a certain carefree lightheartedness. Sure, levels can be difficult, but since when does difficulty diminish atmosphere? Every level, every bit of story, every puzzle imparts, above every momentary frustration, an assurance that this dungeon? It’s nothing special. Hanny does this every day. There’s no sense of danger, no immediate pending doom or great insurmountable difficulty. Now, that could be a problem if the goal was to create some grimdark dungeon crawl where everything is bad and nothing goes according to plan, but that is very clearly not the goal––or, if it was, Moby Pixel failed spectacularly. Regardless, the end result is a lighthearted, upbeat puzzle game perfect for five minute sessions.

If you’re looking for something brutally difficult to occupy you for weeks on end, you won’t find it here. That’s not because Bumpin’ Dungeon is never hard––it can be––but rather because even when it’s hard, the solution is always just around the corner, and the levels are rarely so complicated that they take more than ten or fifteen minutes to solve. Each level feels individually well designed, iterates upon previous levels, and fits well into the overall “theme” of a trap dungeon. The soundtrack is upbeat, cheerful, and emphasises the lighthearted atmosphere imparted by the absence of serious risk or difficulty; the graphics are wonderfully retro and the sprites have clearly been made with care. On the whole, it is a delightfully well-made game that is far, far too kind to its players. If it had an asking price instead of an optional in-app purchase, it would be worth it; as it is, it’s a steal. Think I’m wrong? Go download it, play it for a few days, then come tell me. I’d love to hear your thoughts!