NetEase has been putting out quality mobile games for a long time now, but you’d be forgiven for skipping over them due to their generic naming conventions and questionable choices of screenshots. Their latest, Dawn of Isles (Free), falls into the same trap. But it’s a game any fantasy MMO fan really should check out.

I could be incredibly shortsighted in saying this, but Dawn of Isles feels it leans on the teachings of The Legend of Zelda: Breath of the Wild. Its soft cartoon art style, long, swishing grass, and addictingly simplistic gathering and cooking have me wondering if NetEase would ever consider porting it to the Nintendo Switch. I was entranced as soon as the game fired up, throwing me into one of the most unique and charming character select screens I’ve come across in close to two decades of bouncing between MMOs. 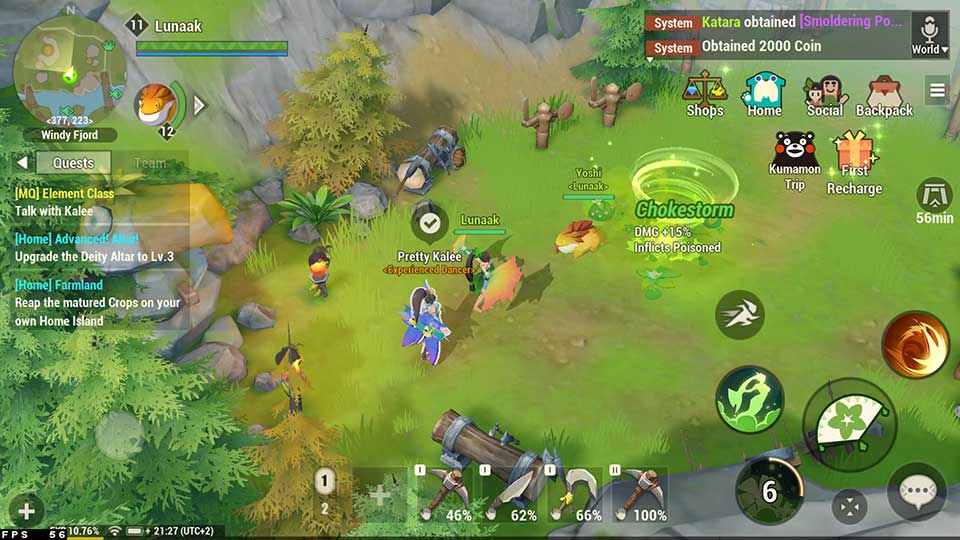 That being said, those into the freedom of character creation tools will be let down here. There are no race and class customization options here, you instead pick one of the four pre-determined characters; the bulky warrior tank, cute and nimble archer, tall and graceful dancer/healer, or the well-rounded Mage. You can tweak their face and add tattoos, but that’s about it. It’ll be doppelganger city out in the wild.

Dawn of Isles takes its time to get going. Things kick off on your own private island where you’ll learn how to gather materials, craft items, and build/upgrade your island’s facilities. Before long, you’re fighting crabs on the beach, allowing your sister to swim safely ashore from wherever she’s been all this time. Chatter ensues, you befriend a “peeping tom", and all hell breaks loose as the sneaky lizard’s change of heart falls on deaf ears, leading to his master and his cronies swooping in to steal your sister for reasons I struggled to comprehend.

The game is almost fully voiced in Japanese or Chinese. And while the text translation isn’t the worst I’ve seen in a foreign F2P MMO, it still struggles to make much sense in key moments. It feels like a minor gripe at first, but you’ll struggle to really connect with any of the characters you’ll meet on your journey around Kanganol. After the boom in “Imouto" anime, maybe there’s a reason the emphasis lies on your little sister and barely anybody else. Given the context, it actually kind of works.

Though the UI can start to get a little cluttered over time – like most F2P MMOs – the simple tap n’ drag nature of combat lends itself to playing arguably better on a PC/emulator set-up than a mobile phone itself. I wanted to take in the sights and sounds on a larger screen, my tablet, but when it couldn’t handle the game smoothly above its standard setting, I just had to see it scaled up to max on a more capable machine – my main gaming PC. My Pixel 2 XL runs it better than my tablet, but Dawn of Isles honestly feels more at home on a larger screen.

Switching into screenshot mode reveals just how Dawn of Isles pulls off its powerful visuals, though – draw distance is incredibly slim. If it’s not visible in the standard view, it basically doesn’t exist. It’s an efficient rendering method for sure, but it would be nice to see a little less deep grey mist when taking a close up shot of you and your friends.

While the archaic hotbar makes a grand return, it’s more a convenient tool than a combat necessity. In most cases, its slots are simply shortcuts to your gathering tools, food, and other commonly used items. 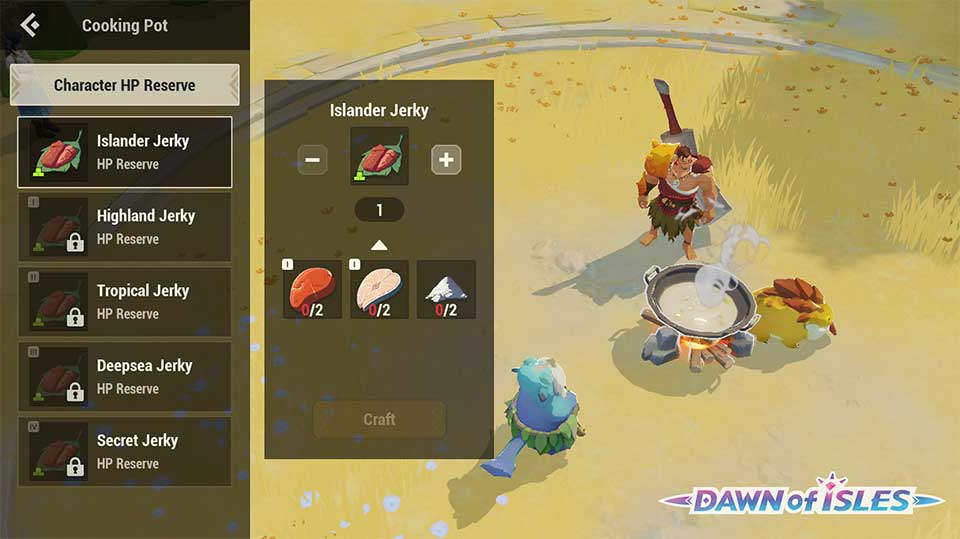 Whether you’re in need of wood, ore, fish, hides, or berries and wheat, you can quickly tap the corresponding tool on your hotbar and hold the action button to whack every node in sight. It’s not the most engrossing gathering mechanic, but there’s something oddly satisfying about the screen shake simulating the impact of a hatchet striking a tree, or a pickaxe splitting a rock.

The stock sound effect of a tennis racket hitting a ball only adds to the enjoyment. If you’re grinding materials, it’s fun to just imagine a game of Wii Sports Tennis or an iconic Wimbledon Grand Slam taking place somewhere in the distance. Extra materials or treasures can be bought and sold at any time through the market interface, creating a decent sense of community, or fueling the confounding ability to steal ripened fruit and vegetables from anyone else’s home island.

Combat is, on the whole, only slightly more complicated than the tap n’ go nature of gathering. It’s a semi-active system that feels like a mix between the evolution of MMO combat in games like TERA and Black Desert Online and the more traditional styles of World of Warcraft and Final Fantasy XIV.

Auto-attacks still always find their target, but you have a dedicated dash button to quickly escape incoming damage. Most of the early game is easily tackled alone, but players can team up in groups of 5 to tackle a small number of rapid dungeons or band together in larger parties to take on randomly spawning world bosses. Most mobs can be tamed by throwing specific items and “dancing". Once captured, pets will grant you access to another unique attack in combat. 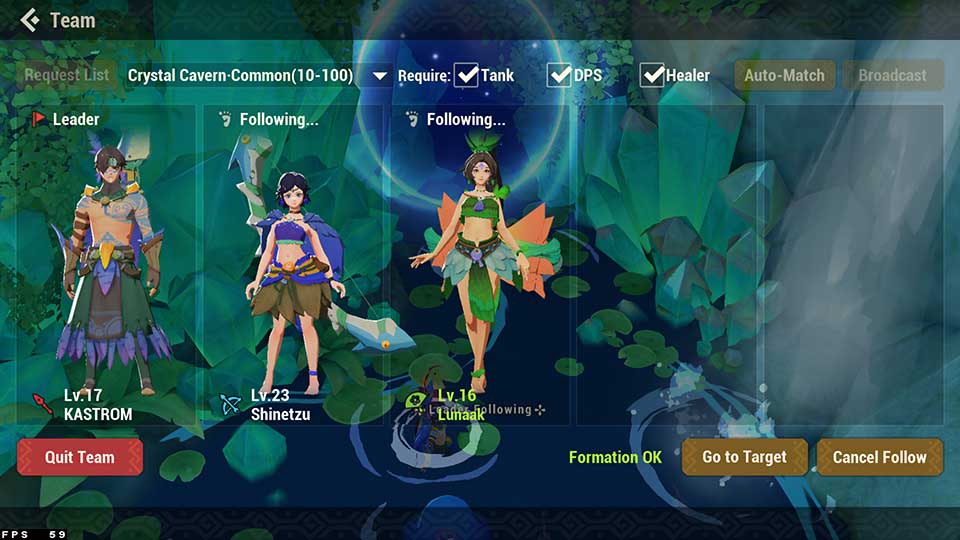 Pets can be leveled up, evolved into larger species, and occasionally used as mounts. I didn’t see much reason to capture something new in my 8-10 hours with the game, but with elemental resistances and their own roles, I don’t doubt there are pets better suited to specific situations you’ll want to keep an eye out for.

Gathering ended up being one of the quickest ways to level up early on, but dungeon and boss combat soon took over. The world’s 5-6 zones aren’t massive by today’s MMO standards, but the quests and storylines will keep you from burning through them too quickly.

Auto-attacks are delivered by holding down the large weapon icon, with separate abilities – typically on a cooldown – or on the surrounding buttons. You’ll learn a few more as time goes on, but at level 20 all my Dancer had was one core AOE ability, a healing clone she could toss out to mimic her moves, and her pet’s own – a straight-line AOE. 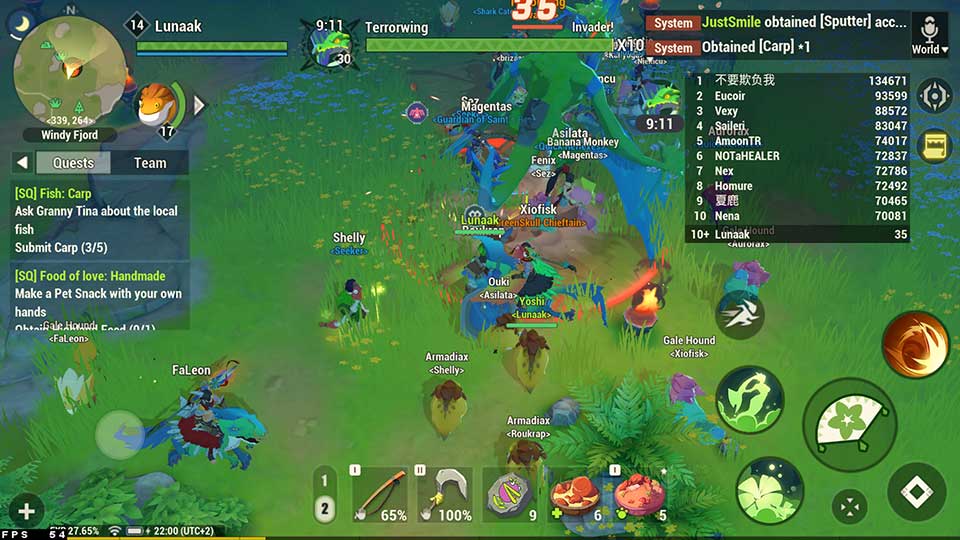 The only real gimmick to speak of is the something akin to elemental conversion. Simply put, your attacks can trigger additional effects when mixing with attacks of another element. If I were to drop my Dancer’s poison AOE on another enemy’s ring of fire, it would detonate for additional damage. Likewise, a fire ability mixed with a puddle would create steam for another ability to take advantage of. It’s a welcome tweak to the fairly uninspired combat system and one skilled players can manipulate at will by crafting throwable jars of their chosen elemental effect.

Dawn of Isles is a gorgeously crafted mobile MMO. With a delightful art style, plenty to see and do, and countless rewards and achievements to reap, it’s a true testament to how far mobile graphics have advanced in such a short time.

This is the kind of game I was desperately searching for when World of Warcraft started to grow stale for me in the mid-2000s. Knowing it’s playable on something that fits in my pocket makes me feel old yet thankful. The only thing that managed to tear me away from Dawn of Isles was my emulator crashing on a load screen after 6 hours of flawless gameplay. That has to mean something for a mobile game.