It feels like it was more recently but in fact it was over a year ago in January of 2018 that Nintendo very casually announced Mario Kart Tour for mobile devices. It was originally set to launch before the end of March this year, but at the beginning of the year Nintendo announced a slight delay saying that Mario Kart Tour would be arriving in the summer instead. Just over a month ago, they opened up sign-ups for a closed beta test for Android players which kicked off today in both Japan and the US and will run through June 4th. While this is supposed to be a “closed" beta test, these early testers haven’t been shy about sharing their experiences with Mario Kart Tour thus far.

Back in February of last year shortly after the game’s announcement the CEO of DeNA, who are partners with Nintendo in creating Mario Kart Tour, said that the game would be “free to start" which many had taken to mean would be something more along the lines of Super Mario Run where it’s a free demo with a one-time IAP to unlock the full game, rather than a typical free to play game with timers and gachas. That is apparently not the case at all. Mario Kart Tour is as free to play as they get based on the beta, with gacha pulls used to unlock characters and kart parts. Even worse is that the various Nintendo characters in the game have different levels of rarity and some appear to have special advantages over others, meaning certain players could have gameplay advantages over others based on which characters they were lucky enough to unlock. 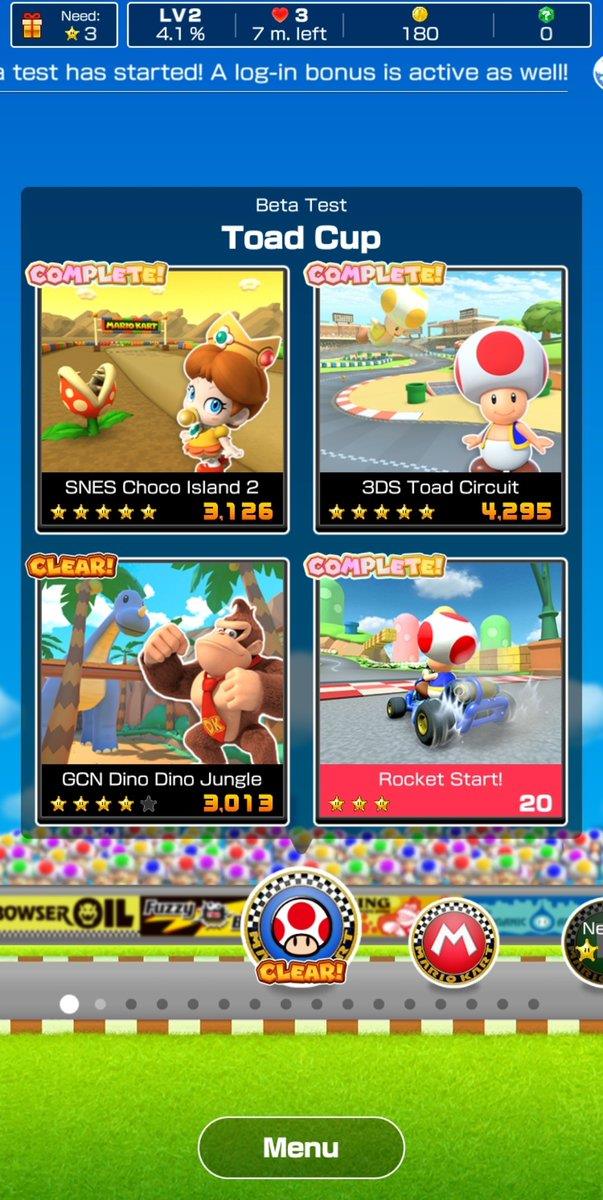 While I’m not thrilled about that I could still probably deal with it, but Mario Kart Tour also contains something that’s my most hated thing in any free to play game: A stamina meter. It’ll cost hearts to begin races, and of course there’s a cool down timer for those hearts, so once you’re out you’re stuck not playing until the timer refills your hearts or you pay for a refill IAP. Stupidly, these timers also pop up when you’ve unlocked a new Cup, making you wait for some reason before you can play a new set of courses. Why developers ever want to actively prevent you from playing their games I’ll never understand.

As for the game itself, it seems to be a stripped down take on Mario Kart built with mobile in mind. It plays in portrait orientation so you can play with just one hand, and there are only two laps per course as opposed to the typical three in mainline Mario Kart games to provide a quicker, more mobile-friendly experience. You control your kart’s steering by dragging on the screen or tilting your device, and you have the option of having the drifting mechanic which is integral to Mario Kart be handled for you automatically or doing it yourself. Most early players have said that turning on manual drifting makes a big difference in the amount of fun they’re having, as does moving into the faster circuits as the 50cc you start out on is painfully slow. Here’s a nice video from YouTuber Davidth showing a full race in the game.

It’s important to note that this is a beta and things can certainly change between now and the game’s full release this summer, but I wouldn’t expect any miracles in terms of the monetization model that we’re seeing in the beta. This will be a very free to play game, and it will probably make a boat load of money. As long as it provides a satisfying Mario Kart racing experience I think I can deal with that, but based on early impressions it seems this might just be a bland shell of the full Mario Kart games. I felt like Animal Crossing: Pocket Camp had the look and feel of an Animal Crossing game down but none of the heart, and I’m hoping that’s not the case here. This thread over on the ResetEra forums seems to be the main gathering point of all things Mario Kart Tour, so head over there if you want to see a lot more screen shots, videos, and impressions from beta testers.