It’s actually a little hard to believe that Angry Birds took this long to get an augmented reality outing. If you think about it, those past-their-peak-but-still-really-famous birds have long been about flinging themselves at structures, and that’s a mechanic that was crying out to be done up in AR. Happily, that’s exactly what Rovio has done with Angry Birds AR: Isle of Pigs (Free). Now you can act like you’re firing your feathered friends in your house, out walking around on the street, or pretty much anywhere you have a flat surface.

And really, that’s all you need. Isle of Pigs is very much a throwback to the early days of Angry Birds in the sense that there’s a minimum of extraneous distractions, It’s just you and your slingshot for the most part, trying to figure out how to take out those pesky pigs in as few shots as possible.

The secret sauce for this game is the level design and how it puts the AR features to the best possible use. Once you take in what we’ve laid out in this guide. you’ll be better equipped to start wrecking stuff wherever you like. Ladies and gentlemen, to your slingshots!

How to Get Started: Launching Your Birds in AR

Unless you’re a first-grader who is just learning to read and playing your first Angry Birds game — and if that’s the case, I’m quite honored you are using this guide to help further your reading education — you already know what the object is. In each level of Isle of Pigs, your objective is to eliminate the pigs scattered around each level using as few of your three birds as you can.

To get started, you’ve first got to find a flat surface on which the game will build each level.  Red will help you with a meter that fills up depending on how suitable the surface you can see through your phone or tablet’s camera is. 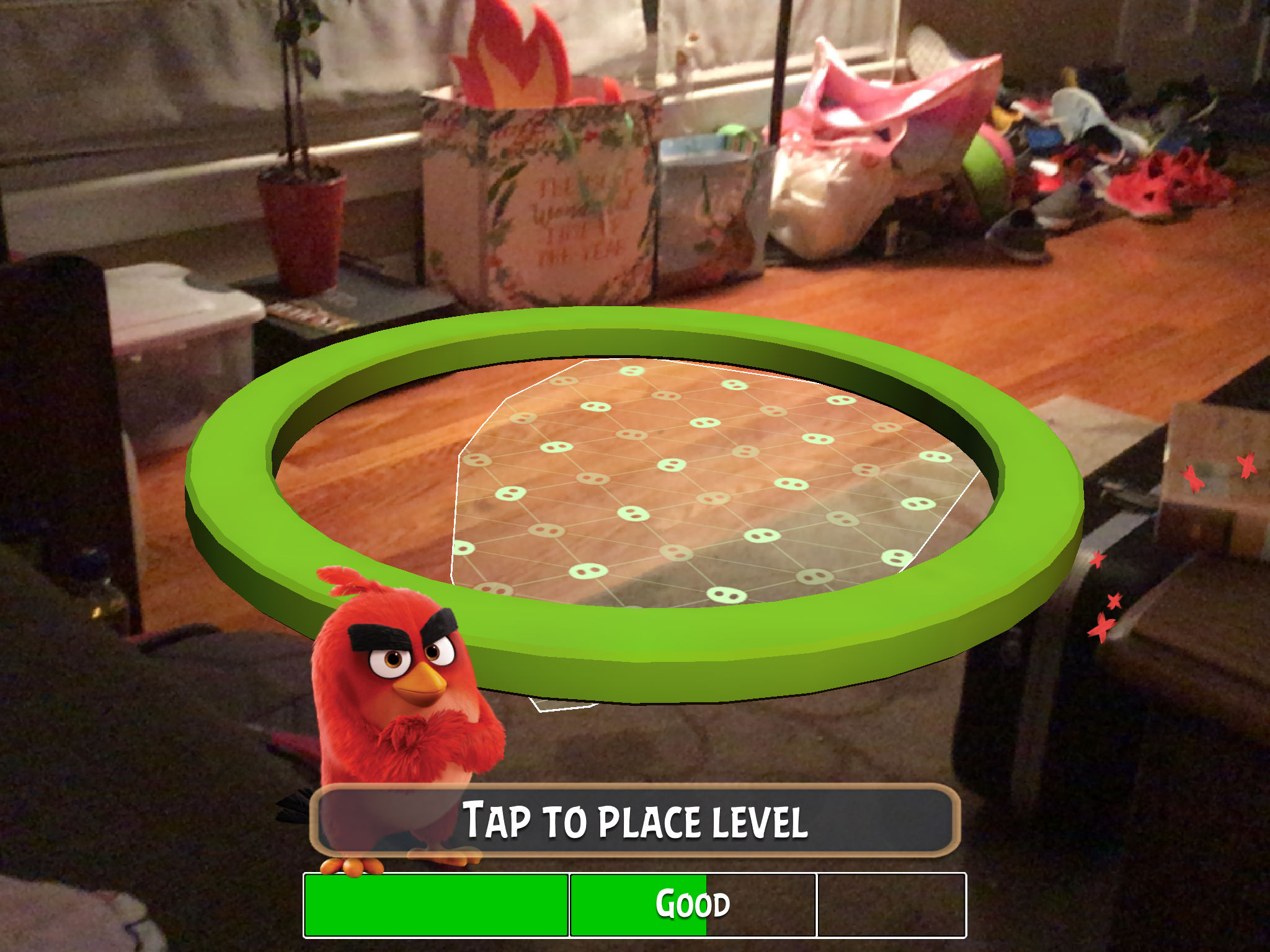 Once you’ve found the perfect spot, just tap on the circle to place the level and start playing.

Bonus tip: On the move or simply unhappy with where you plopped down the isle? No worries. You can re-do the placement by tapping on the small 3D cube icon in the upper-right corner, allowing you to set the game up elsewhere.

As for actually flinging birds, it couldn’t be easier. Simply tap on the screen and drag down to pull back the slingshot. A line will appear on the screen to depict where you are aiming, and the further you pull back, the more velocity your bird will have when launched. 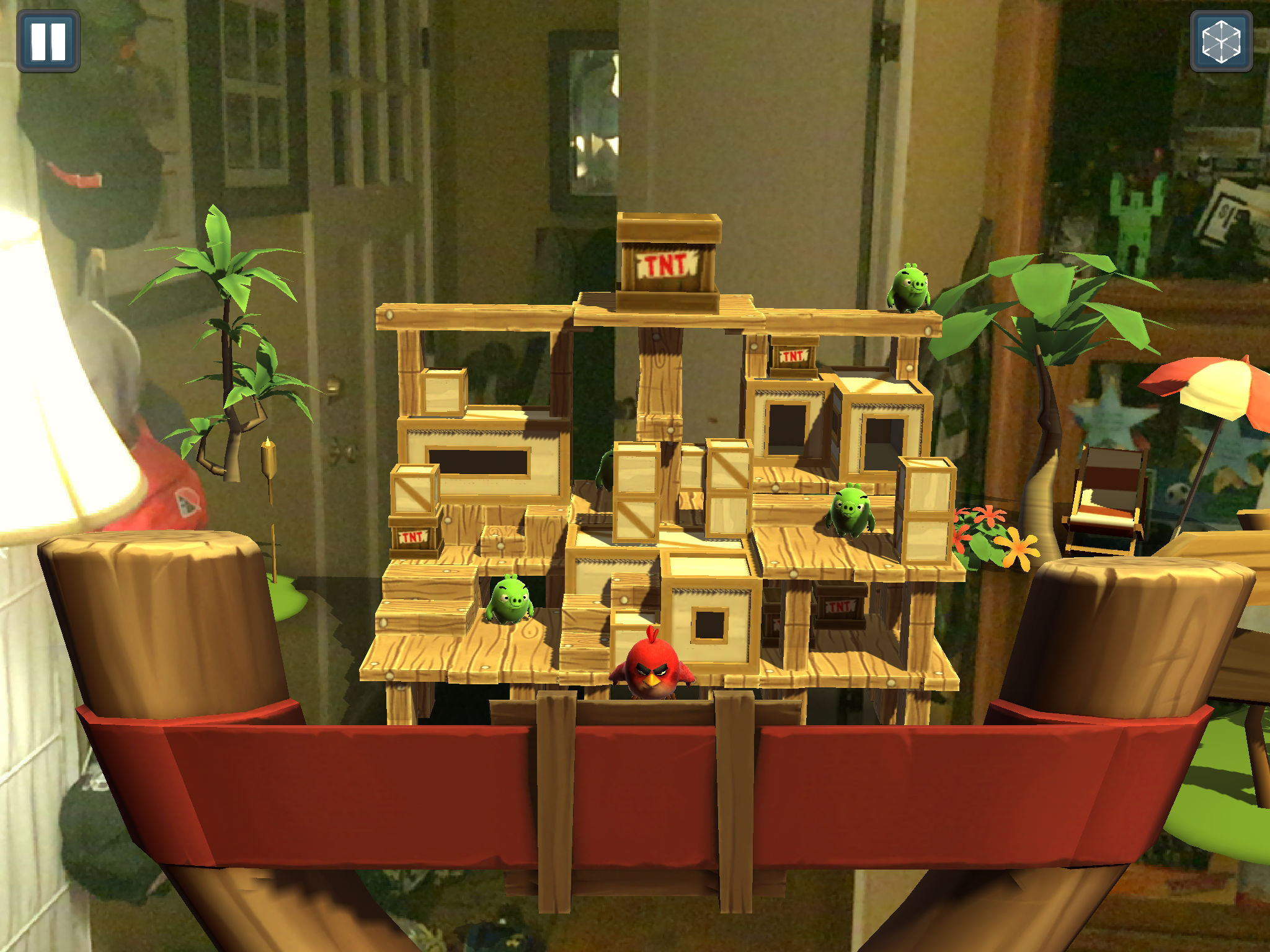 Here’s the really clutch part: You are free to walk around each level to decide exactly which angle you want to fire from, and even go all the way to the opposite side if necessary. This is a tremendous amount of freedom you simply don’t have in other Angry Birds titles, but it also takes some getting used to because your instinct will be to just attack each level from the front. Do your best to resist that, because you will come up with better plans of attack by examining each level from multiple angles, perhaps even finding pigs or TNT crates you couldn’t see from the front.

Bonus tip: Even though you can place the island wherever the game tells you there is enough space, it behooves you to give yourself as much room as possible so you can move around it 360 degrees. Bordering it with a wall or other obstruction is going to create a higher degree of difficulty for you by default.

How to Get Higher Scores

Your score on each level depends on a few things. You’ll get more points for causing more destruction, so even though, for example, you can take out the lone pig on the game’s first level just by sniping right at him, you won’t get a very high score since you wrecked nothing.

You’ll also get 10,000 points per bird you have left after eliminating all pigs, up to a maximum of 20,000 points (unless you figure out a way to beat a level while using no birds, in which case you really need to be writing this guide instead of me). This is all important info, because every level can yield up to three coins (one coin per star) depending on your score, and coins are used to unlock further regions beyond the first one on the island. 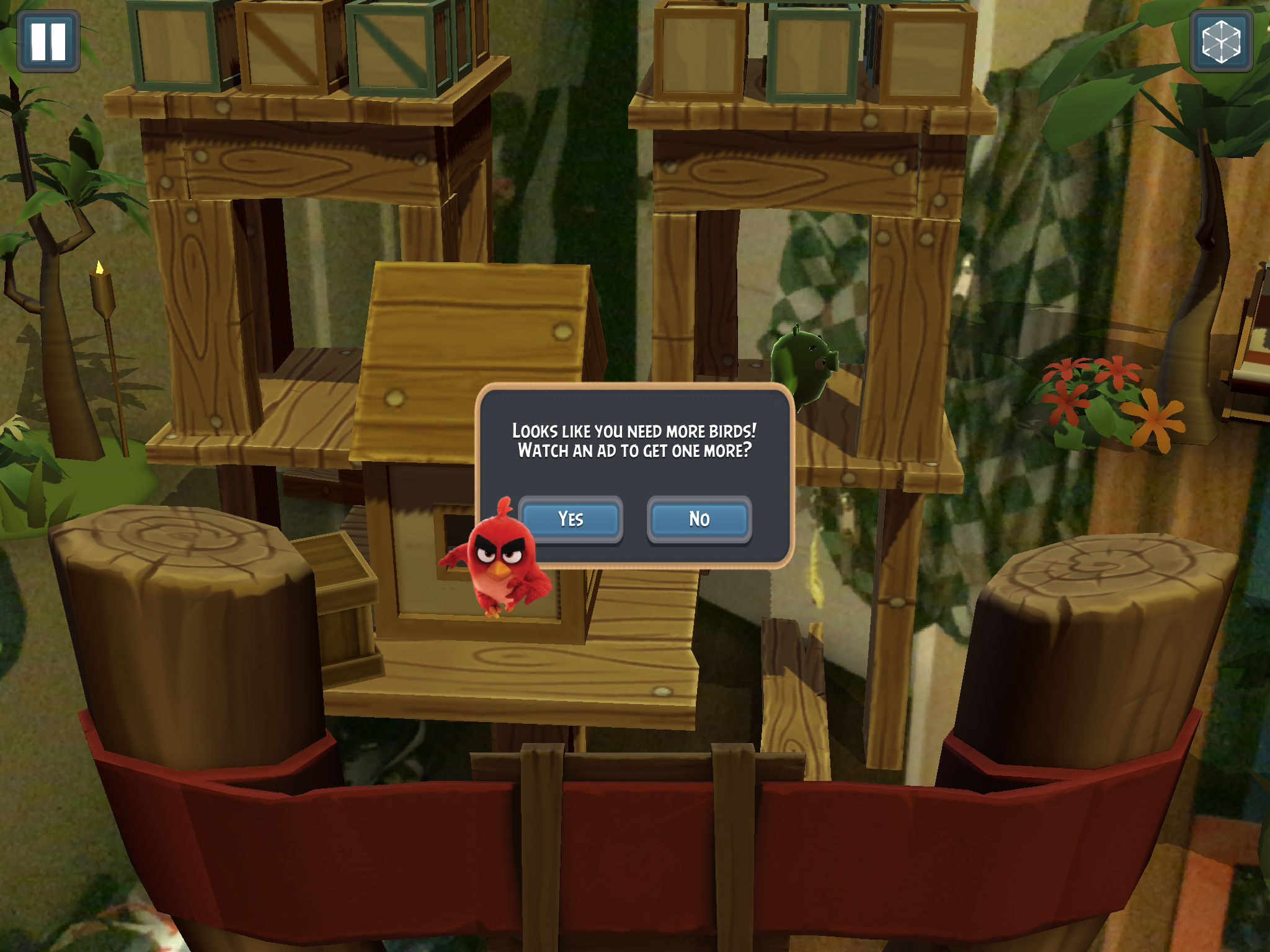 Bonus tip: Could you finish a level if you just had one more bird? You have the option of getting one by watching an ad, and will be prompted to do so if there are any pigs left once you’ve used all your birds. A caveat, though: You can only get one extra bird, so if that won’t be enough, you’re better off replaying the whole level. Also, if you fail, be sure to take note of the hint that displays before you restart, as it might give you an idea of how to better tackle it next time.

How to Get More Coins

As noted, you can earn three coins per level, and you can go back and replay a level as many times as you want in order to go for the ones you failed to acquire the first time through. If even that isn’t enough for you, there’s an option to watch an ad to grab one more coin, once per level. Just tap on the movie icon on the right-hand side when your score comes up at the end of a level. With that in mind, there’s actually a maximum of four coins you can earn per stage. 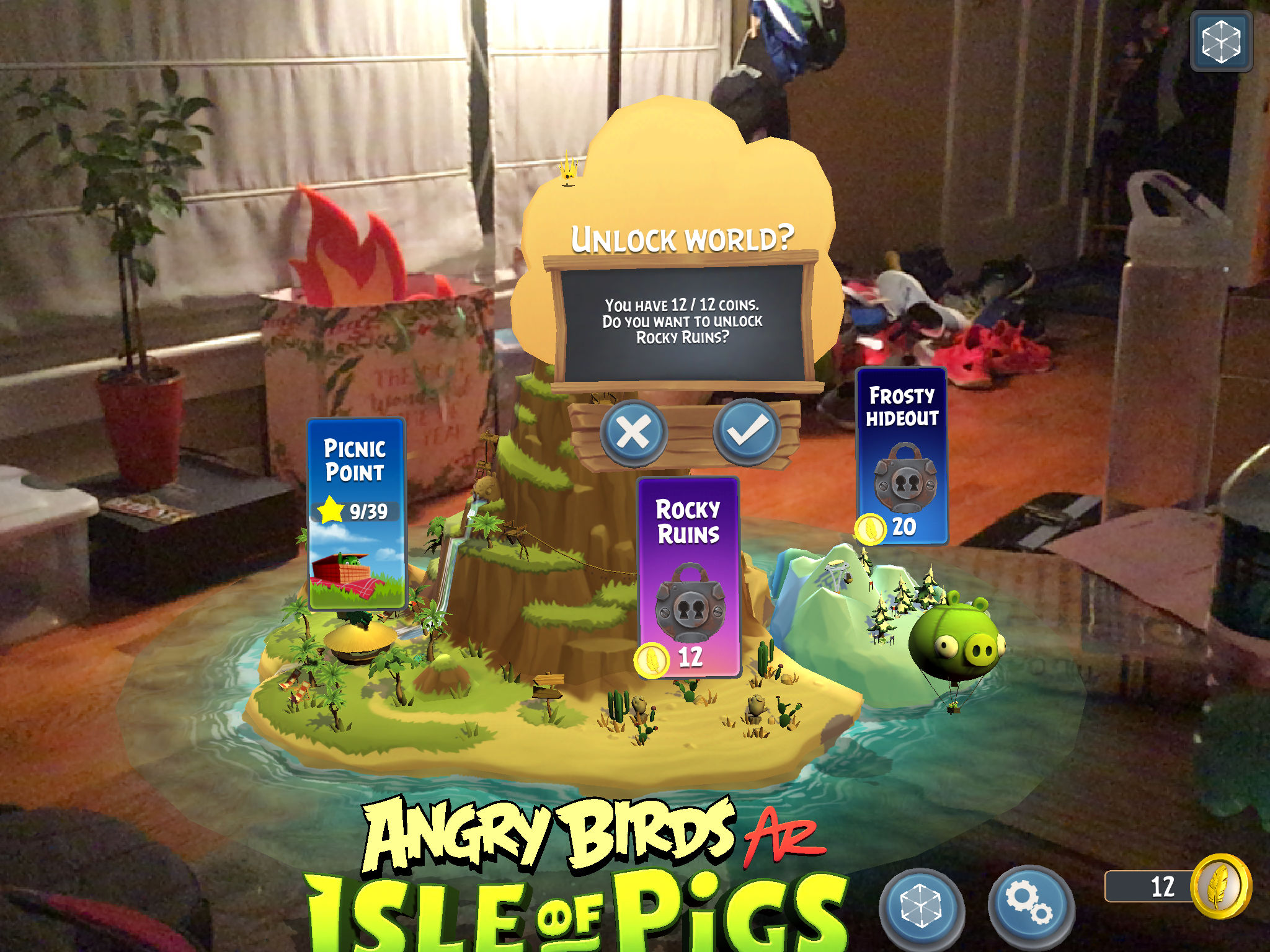 Note that once you spend the coins to unlock a new area of the island, they’re gone. So for instance, once you have 12 coins and open up the game’s second region, you’ll need to acquire 20 more to advance to the third region.

Are There Other Birds Besides Red?

There sure are. The second Angry Bird you’ll meet is Chuck (he’s the yellow one), who has a special ability that speed him up in flight. Just tap on the screen while Chuck is on his way toward a target and he’ll get a speed boost. 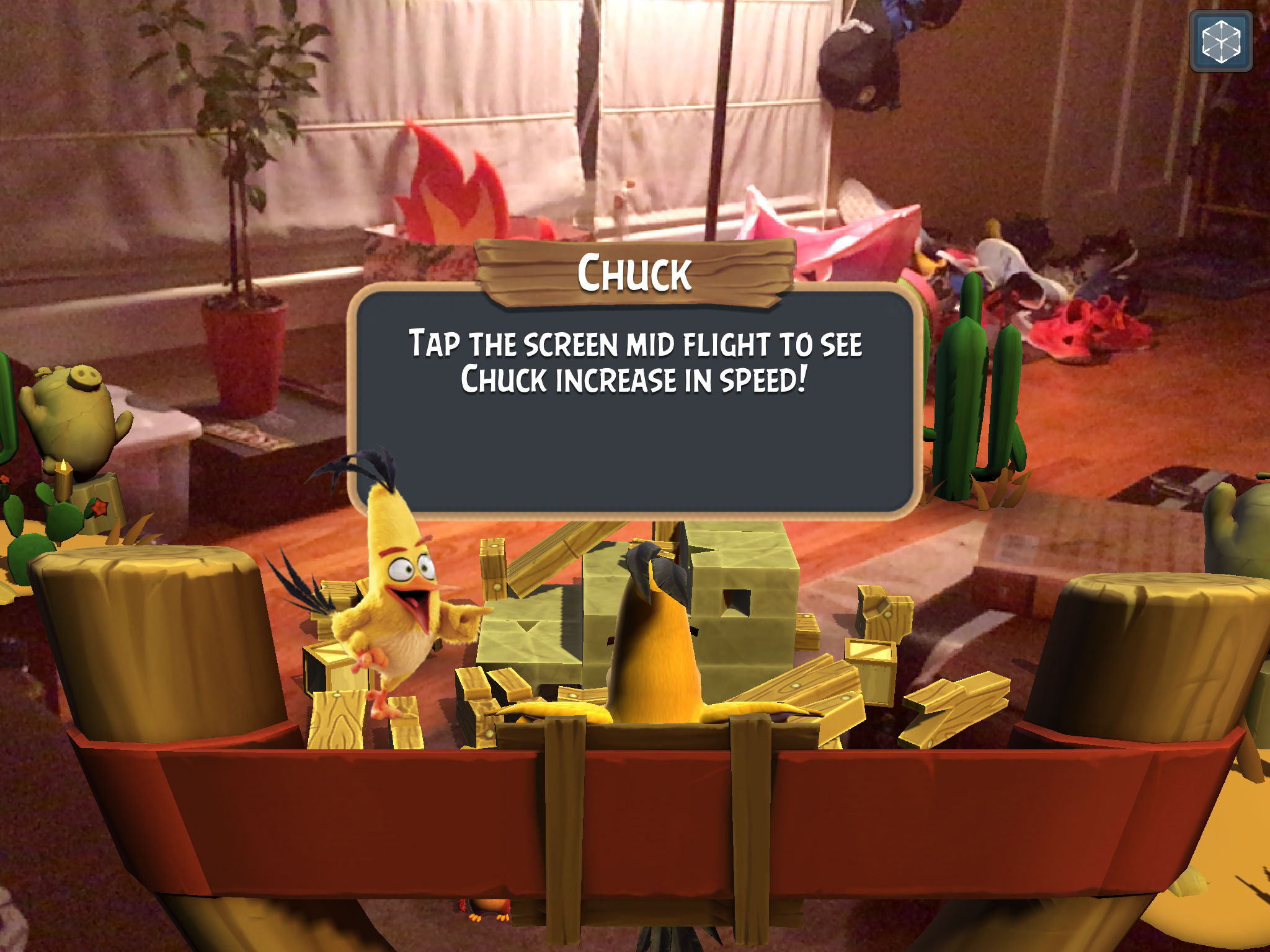 Why isn’t your favorite Bird in the game yet? The guess is because it’s a lot tougher to design levels in 3D for AR than it is to lay them out in 2D fashion, so the devs were well-served by keeping things simple. Rovio is promising plenty of updates after release, so it seems like a safe bet that most of the winged warriors will make their way into Isle of Pigs eventually.

Is There Anything That Can Be Done About Those Ads?

Probably not. You’ll notice that even if you avoid watching the ads for extra coins, you’ll still end up watching some every so often before you start a level. It’s annoying, but also a relatively small price to pay considering Angry Birds AR is free and doesn’t even have any in-app purchases (at least at launch). Consider those clips for other games a small price to pay for hurling your Birds in AR.