Indie developer Monte Boyd, maker of the fast-paced arcade game Finger Smash (Free), has a really cool looking game in the works called Knights & Slimes. It’s an action platformer but not in the traditional sense. You play as a knight aiming to rid the world of slimes of all sizes and colors. Slimes are a nuisance in the world of fantasy lore, you know? Best to slice and dice them. But they also have a tendency to split apart when sliced, thus creating two enemies from one. That’s exactly how it works in Knights & Slimes too. Slimes will burst into two smaller slimes when attacked, but in a very cool twist you’ll actually create a combo chain if you’re able to slice that smaller portion before it hits the ground. See what it’s like in the following trailer.

As I said, Knights & Slimes isn’t a traditional action platformer. The levels are arena-style and are only a couple of screen lengths long, and the layouts of the platforms and the enemies are randomly generated each time you play. But this isn’t an endless game and there actually is a level-like structure to it. Kill all the slimes in a single level and you’ll move on to the next, and beating ten levels will bring you to a boss fight. Beating a boss will unlock the next area. There are five different areas and five different bosses in the game for a total of 50 levels. The game gets more difficult as you go and every five levels will unlock a new slime type, and all the different slimes in the game have unique behaviors to learn. Attacking happens by simply running into a slime with your weapon, very similar to the classic Slayin but you actually have control over your movement and jumping in Knights & Slimes. 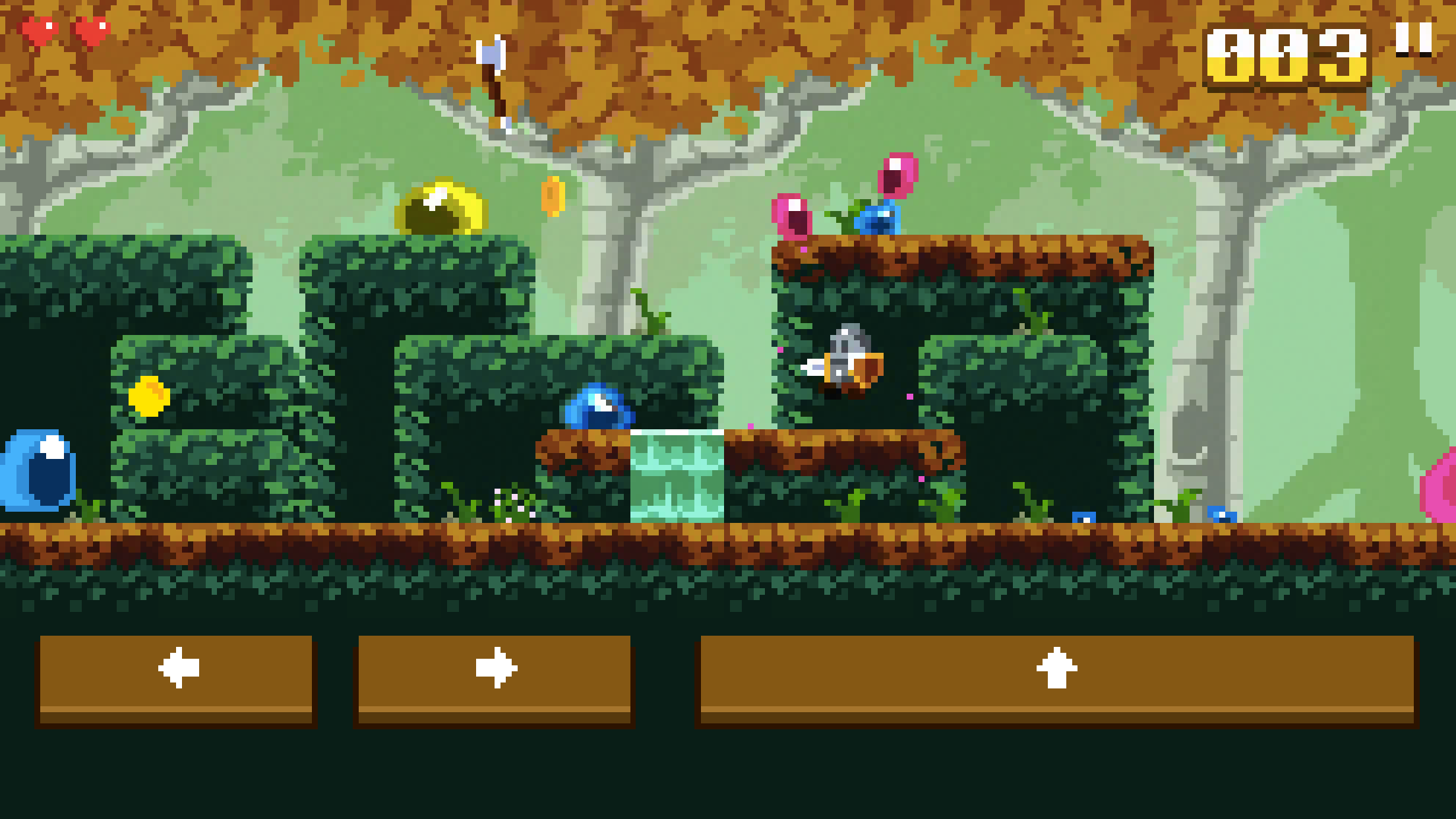 It’s a really cool structure and setup for a mobile platformer, as levels don’t take terribly long to complete but they’re still challenging and you can continue playing as many of them as you feel you have time for. There’s also a huge roster of more than 20 unlockable Knights that you can buy with in-game coins. Those coins are picked up at random during a level and pulling off a combo where you destroy bits of a slime before they hit the ground will also produce coins. You can also buy coins as IAP with just two different packs: A 99¢ one and a $1.99 one. What’s cool is that those packs will also come with additional lives. By default you have just one life so if you die on a level you’ll simply restart at the beginning of that same level. But the 99¢ pack will grant you an additional life, and the $1.99 grants you two additional lives. These are permanent too so in addition to getting the coins from the pack you’ll also get permanent upgrades to the number of lives you have. You can also watch video ads for extra coins, if that’s your thing.

Overall Knights & Slimes is ticking all the boxes of things I love in mobile platformers, so keep your eye out for it as the developer is shooting for a release at some point in April.