Tell me there’s a game like Monster Hunter on my mobile phone and I’ll be all over it quicker than a Tigrex through my Rarity 3 armor set. I’m not as active a mobile gamer as I should be outside of my MOBA niche, so the release of NetEase’s action RPG “Rangers of Oblivion (Free)" took me completely by surprise last week. Jumping at the opportunity to beat up some massive monsters on the go (or in bed, most likely), I tracked down the game on my two devices of choice and got to work. My first impressions of the game stemmed from a quick watch of its launch trailer, opening cinematic, and a delightfully high-res log-in screen. It’s naïve to judge a game by what is essentially its cover, but coming from a relatively limited mobile gaming background, I hadn’t been this intrigued since Mobius Final Fantasy or the original Infinity Blade before that.

And this feeling of wonder wasn’t lost upon logging in for the first time, either. A relatively robust character creator allows you to make the “ranger” of your choosing. There aren’t any additional races to choose from other than your standard high-fantasy human, but there’s plenty of hairstyles, voice types, and body sliders to mess around with. Confirm your selects and you’re good to go. Again, first impressions were high. After a brief introduction, you’re thrown into what could be your new home for quite some time depending on what you like in your mobile action-RPGs and the kinds of similar games you’ve played in the past. Rangers of Oblivion is, to me at least, a testament to how far mobile graphics have evolved in such a small amount of time. Coming from the cutest 2D appeal of the last game I reviewed here at TouchArcade, Rangers of Oblivion was on a whole other level in the visual department.

Characters are undeniably more detailed than the keep walls barricading you in the safe spots of the Rangers of Oblivion overworld, but it’s a large and visually pleasing environment to see squashed into the confines of your alarmingly high-resolution mobile display. The optional HD texture pack will augment this further, but certain object textures will continue to look like an afterthought, and no amount of additional texture layering will make up for some of the game’s lacking geometry. It’s obvious NetEase wanted to focus your phone’s resources on more dynamic models like NPCs, player characters, and the monsters you’ll spend much of your time wailing on in the future; but the Overworld remains vast and inoffensive for the most part.

For those with more (or less) capable devices, there’s a decent selection of graphical options to get the game running to your own personal standard. High FPS mode can be found in a separate tap to shed the automatic 30fps limit, and you can even bump up the render resolution to better match your display. The game ran shockingly well on both my Pixel 2 XL and HUAWEI MediaPad M5 on max settings, so I can only expect the more optimized iOS devices to run like a dream. Just know that player character pop-in does cause some annoying little stutters in hubs, but shouldn’t be present in fights.

Once I stopped lusting over the visuals, however, my early thoughts of running this review as a direct comparison to Capcom’s Monster Hunter series came to an abrupt end. Rangers of Oblivion appears to stylize itself more on the MMO formula, with quest chains and countless markers quickly filling up the mini-map. Given how hardcore Monster Hunter fans can sink hundreds of hours into Capcom’s flagship series, the seemingly endless quest markers and level-ups felt alien to me. 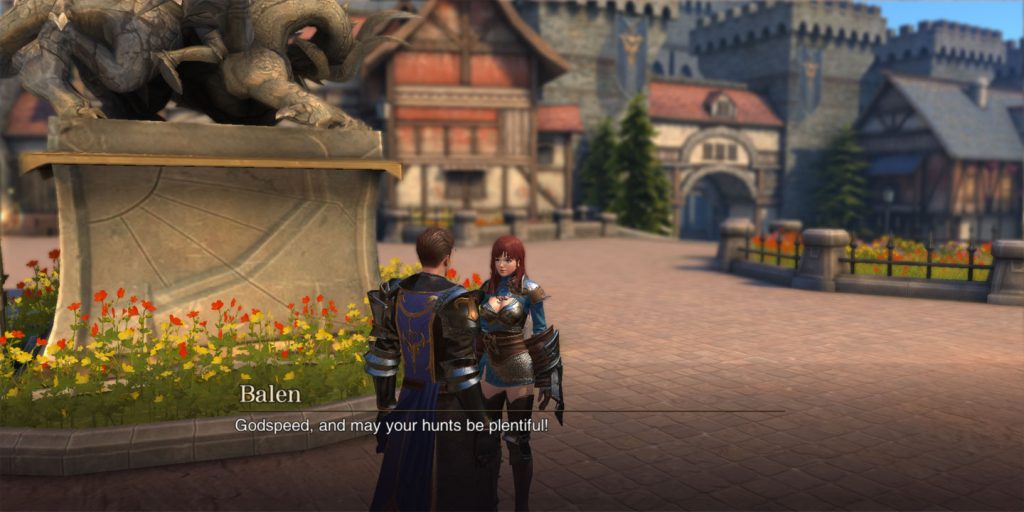 Thankfully one thing that hasn’t changed here is how you pick your class. Unlike most other RPGs, you’re not locking into a combat style or “class” from the get-go, and you don’t need to start from scratch to try out something new. Your moveset is completely dependant on the weapon type you equip. You’ll pick one of these to train with at the very start of the game, but you’re given a full set immediately after and are free to craft the six different types of weapons and their preferred armor sets at will. Greatsword, lance, bow, twin blades, staff, and gauntlets are your options here. Some of these will sound familiar to fans of the genre, but know that the staff is more like a wizard’s wand than a Wukong stick-swinging kind of deal. There’s some magic to be cast here.

Combat is simple enough for the most part. Whether against small animals or the game’s signature “behemoths", your attacks remain the same. Rather than complicated combos, your strikes depend on your weapon choice and are mapped to the left thumb portion of the screen. You’ll have 3 of these abilities to mash outside of your normal attack, but it isn’t always clear whether you’re supposed to hold the abilities down or simply tap and let go; and with no in-game reference to fall back on that I could find, forgetting how your abilities work will either require a little trial and error, or a quick trip back to the weapon trainer. Anything other than your normal attack is on a strict – if short – cooldown, so knowing which attack to use and when will be the key to efficiently smacking down large monsters.

Before long, however, you’ll gain what’s known as a Wild Soul along with the ability to level it up by feeding it other Wild Souls harvested from behemoths. You’ll choose your initial Wild Soul in much the same way you chose your weapon, but one of its three abilities will always be same as the rest – a handy heal. You can only equip one Wild Soul at a time, with its abilities appearing on a pop-out menu above your own to use in a pinch and can range from increased attack damage for your allies, to the ability to freeze a monster in time. Last but not least in the ability to grapple a large monster and throw it to the ground with enough rapid taps. Large monsters in Rangers of Oblivion has highlighted weak points – like legs and tails – that can be repeatedly struck for extra damage. Once they’ve taken enough damage, the limb will break off, causing the monster to fall to the ground for a period of time. The Wild Soul grapple move, once charged, can lead to another rapid knock-down for your team to exploit. 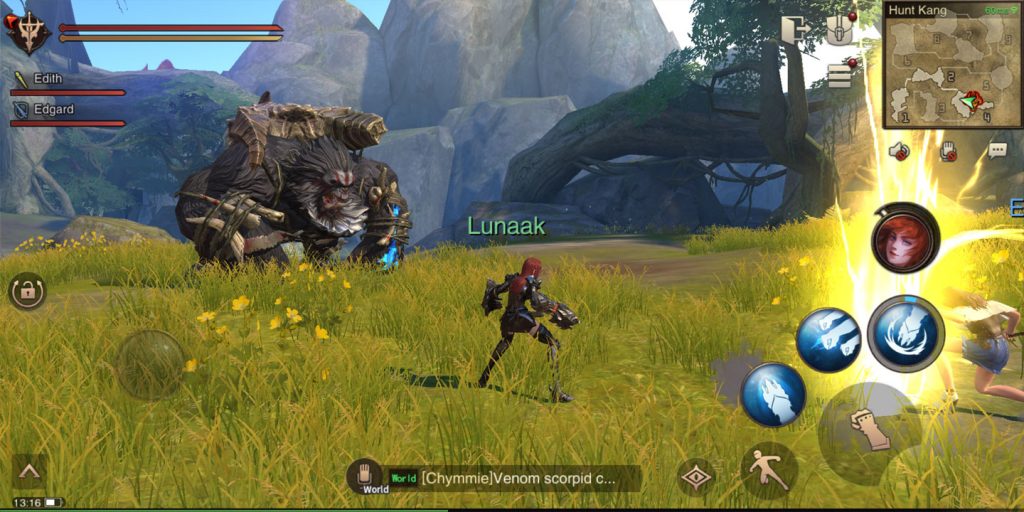 And that’s what you’ll be doing during most of your time in Rangers of Oblivion. Outside of a few select quests, the main gig here is identifying materials you need to craft new gear and going out into the world to smash the monster needed to earn them. After a few hours with the game, I decided it was taking a little too long to introduce some genuinely awe-inspiring monsters to fight; and judging by the mission list available to skim over, it probably never will.

Monsters aren’t quite on the same scale as other games, and their names leave a leave a lot to be desired, too. Fights are somewhat entertaining, but they’re hardly the tense brawls veterans of the genre would come to expect. With above average visuals, practically full – and surprisingly decent – English voiceover, and plenty of quests to get stuck into, it’s just a shame the core monster slaying aspect of the game feels like an afterthought. Hunts are what deplete the game’s equivalent of an energy meter, however, so you’re free to roam around the hubs when you’re running high and dry. Just don’t expect to get many of the gathering quests done until you’ve replenished your hunting vouchers.

Rangers of Oblivion is bound to entice those with limited experience in the genre, and it’s a great opportunity to dip your toes in the field. But the lack of truly terrifying monsters and subtitles that regularly deviate from the words coming from your speakers, it’s difficult to truly immerse yourself in the world NetEase and GTArcade has attempted to build. There’s plenty to see and do, but only newcomers may want to stick out the ride.