Admittedly, I struggled to see eye-to-eye with mobile gaming for the longest time. The lack of control options hurt my perception of it in the early days, with the then questionable ethics of F2P models clouding my vision thereafter. Things have normalized over the years for sure, but the ‘pay or wait’ mechanic of many popular portable and web-based titles has always put me on edge. I never expected myself to fall in love with a game that employs those very same systems, but slap a restaurant management sim, classic RPG, and cute anime aesthetics together and the skewer in my heart will come out clean. And Food Fantasy (Free) practically jammed it in there. 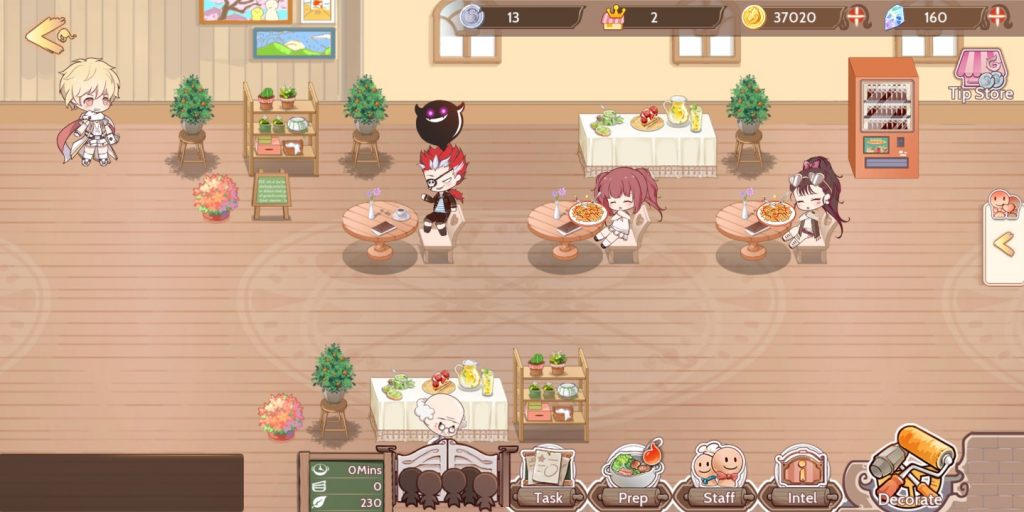 Hailing from ELEX of Love Nikki (Free) and Clash of Kings (Free) fame, Food Fantasy is a dangerous concoction of tried and tested mobile game hooks. Fire it up for the first time and you’ll be introduced to a swathe of its pretty-boy and girly-girl characters in a more dire situation than you’ll typically see in this mostly light-hearted adventure. These ‘Food Souls’ stand by the humans of Tierra to fight against what are known as ‘Fallen Angels’ – like Bulimia! It’s not a groundbreaking story – or even as wacky as you’d expect – but it doesn’t dampen the core experience.

Once this all plays out, you’re back to a less chaotic scene. You pick your player avatar and name before inheriting a restaurant and meeting Rice, a Food Soul known as an ’empty shell’. Rice won’t ever follow you into battle, or help clean the dishes, but she’ll act as your navigator and story companion guiding you through the opening tutorial before becoming a regular face in the main story.

Food Fantasy is a gatcha game at heart, with your power essentially boiling down to how lucky you get with Food Soul pulls – or ‘Summons’ – and how efficiently you can farm for the shards of your current souls. Teams used in battle consist of a maximum of five Food Souls. Any of these can be placed in a team, but just as some are far more suited to the restaurant life, others are stand-out fighters. 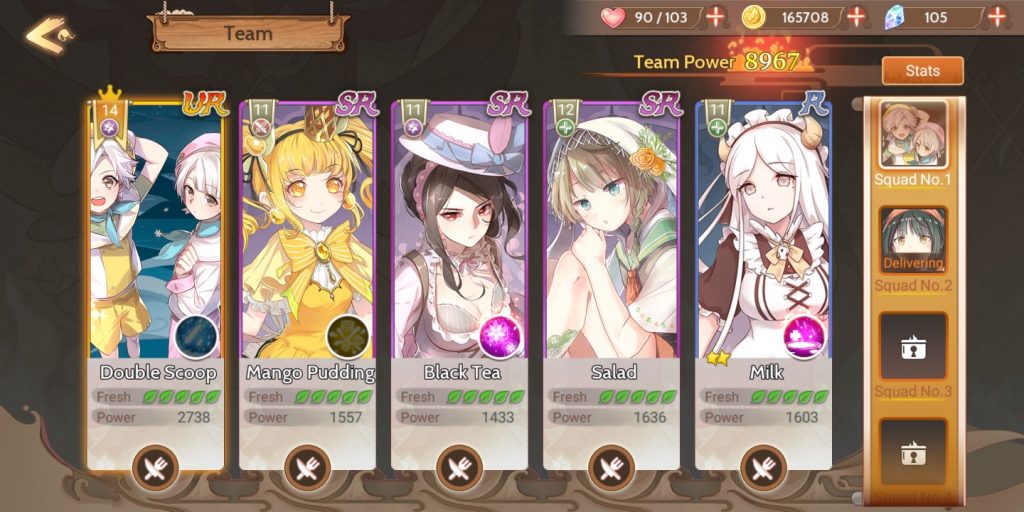 You’ll start with a mix of these, with Sandwich and Hawthorne having access to restaurant-specific stats and skills, whereas Milk is a healer you’ll likely be bringing into battle for some time. Your first two summons – forced on you by the tutorial – are scripted to be Tom Yum, a ‘Rare’ character, and Black Tea, a ‘Super Rare’. While Ultra Rare characters will typically be great assets on the battlefield, ‘Shards’ earned through duplicate pulls or specific in-game events and rewards can be used to increase the ‘Star Rank’ of the corresponding Food Soul.

In most situations, upping a Food Soul’s star rank will push them ahead of a lesser grade card of higher rarity in terms of power, so things aren’t always as simple as pulling a bunch of the rarest summons you can wish for. This helps Food Fantasy feel more free-to-play friendly, as it isn’t always just down to blind luck in the grand scheme of things. Food Souls can’t ever surpass your own level, either, so it’s easy to keep a bunch of alternate Food Souls close to your level for when a certain stage calls for a change in strategy, boosting them further with purified ‘Fallen Angels’ as you level up. 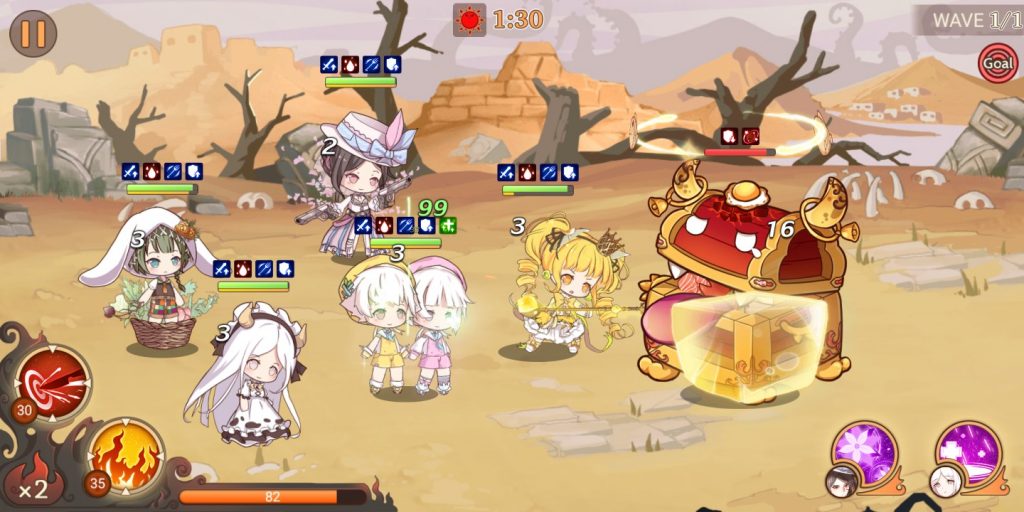 Combat takes place in a slightly more ‘real-time’ setting than screenshots suggest. It’s a tad slow on the base 1x setting, but increasing it to 2x really helps it shine. Food Souls attack automatically over time, using the passive skills displayed on their character sheet. So while most of the ongoing action plays out by itself, the brunt of player strategy comes from the active abilities on both the left and right side of the screen. Certain weather effects can introduce extra challenge, but you’ll be made aware of these before you go into battle.

‘Link Abilities’ become available when certain Food Soul pairings are together – like Milk and Black Tea or Coffee – and are activated with a tap when charged. These can range from powerful AOE strikes to potent heals that, when timed right, can drastically alter the outcome of battle. On the left, player-selected ‘Talents’ have similar effects, from a steak knife dealing heavy damage to the back row, to a strong shield covering your team in a pinch.

These won’t seem inherently necessary in the early stages of Food Fantasy, but awareness, patience and strategy will go a long way. To keep things flowing, you can even mitigate specific boss attacks by tapping countdown timers, or even clear the screen of sudden spawns. For those in a hurry – or who just want to farm materials as fast as possible – the ‘Sweep’ option on a the stage select screen can be used to quickly clear a previously completed fight instantaneously.

Time spent in Food Fantasy is quite literally half management and half combat; they intertwine exceptionally well. A quest system keeps you trying out new systems and combat stages, but you’re mostly left to your own devices once the tutorial comes to a close. Gold, typically earned in the restaurant, funnels back into the business; whereas Tips given by customers can be spent on a rotating select of Shards to help power up certain souls.

Taking and delivering orders is mostly automatic, but running the restaurant means having your chef constantly cooking so that your waiters can deliver food to your hungry customers. You’ll only be able to have two specific dishes ready to go at any one time, but you can make stacks of these in advance to keep custom flowing while you’re off doing other things.

Similarly, staff slots and customer seating increases as your restaurant gains ‘Fame’ from your patrons, but actually upgrading the place also takes building materials you’ll source in other ways. But you’ll need to pay close attention to the Freshness of a Food Soul, as running dry means they’ll be out of commission until they’re allowed to rest. 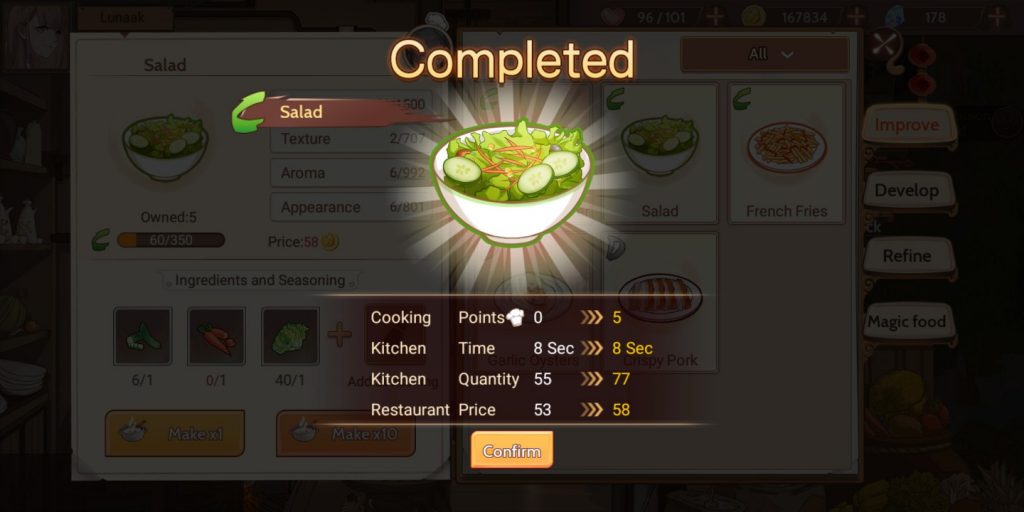 One of the biggest compliments I can give Food Fantasy is its non-reliance on external strategy guides for the little details. Cooking the same dish dozens of times is a normal part of the process, and whether it’s to improve the rank of a dish, or load it onto the airship for rewards, you’ll rarely have to look up where to find a specific ingredient. The menus are so well put together that a simple tap on most items item will commonly tell you exactly how to source each component.

Inventing a new dish isn’t quite so simple, but its description will usually hint at which ingredients to toss into the pot. There’s an element of trial and error, but it’s yet another section that can be sped up with cash if you’re incapable of waiting 10 minutes to see if you were right or wrong. Premium currency can be spent in a bunch of other ways (like in Summons, of course), but this will only ever help players climb specific weekly leaderboards in a way that’s identical to basically every other F2P gatcha game on the market. There’s no way to gain a combat advantage here other than consistent UR or duplicate pulls, and that’s still down to dumb luck rather than expendable income. 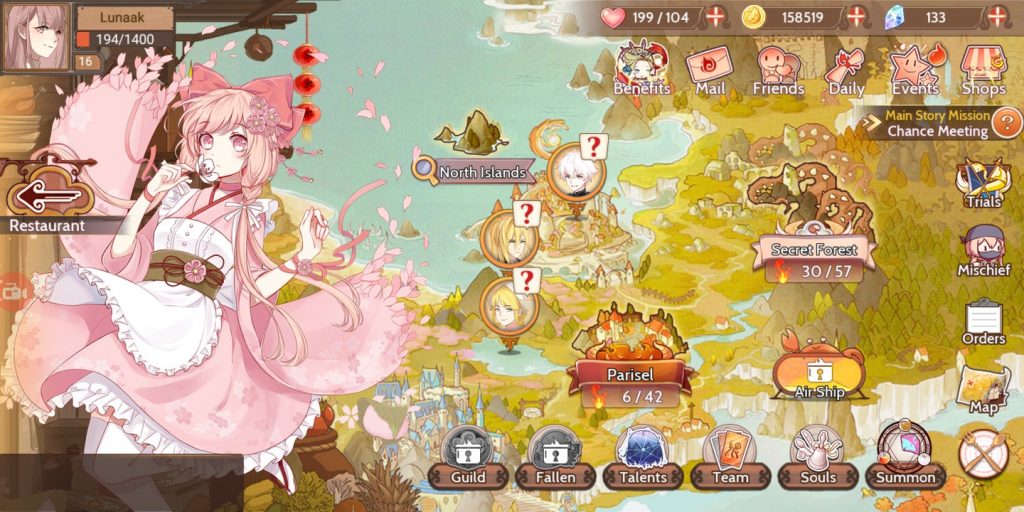 Between creating new dishes to serve, or more of them to keep the money ticking over while you’re away, Food Fantasy has an almost dizzying amount of tasks and features to keep you tapping away. Unlocked as your Player Level and Restaurant Rank increases, you’ll never be without something to do.

Hard-Mode stages offer unique challenges and rewards, deliveries and recipe improvements keeps you needing to farm for more ingredients, and things like the wave-based Catacombs, PVP-esque Showdown or day-specific Trials will push you back into the battlefield. It can get overwhelming at times, but the gradual introduction of new systems means you’re never thrown into the deep end. It’s hectic to the point it could be a tad too much for the average person to dive into, but there’s no real downside to neglecting it for a day or two. 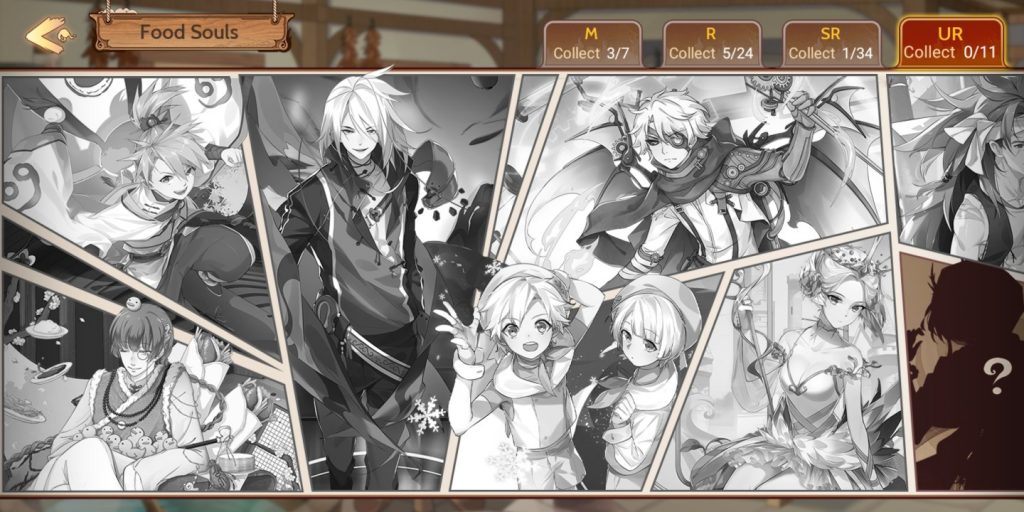 It’s easy to imagine the first wave of Food Fantasy players being otaku-types drawn in by its gorgeous anime art-style, noteworthy voice actors, and bizarre premise of these cutesy characters being named after food. But I see little reason why it won’t be able to pull in a far wider audience in time. Both the RPG and management side feels like two fully fleshed out games.

And while partaking in both is optimal, it’s simple and compelling enough for RPG fans to grind and for simulator fans to relax and unwind. The time investment it clearly demands, combined with some inconsistent story elements, forbids me from dishing out a perfect score here, but Food Fantasy has warmed the heart of this grouchy gamer and is one app I hesitate to close.