Even though Brawl Stars (Free) has only just released on the App Store worldwide, there’s a good chance you’ve already heard about it or seen it. Heck, there’s a decent chance you’ve played it given how long it was percolating in soft launch.

But it’s here now, and there’s good reason to be excited about it. First, it’s a new release from Supercell, who you might know from a few little games called Clash of Clans and Clash Royale. If there’s a money in the bank company in mobile games right now, this is it.

On top of that, it’s easy to get into and a lot of fun. The main Brawl Stars game mode, or at least the one you start out in, is a kind of MOBA-esque PvP battle between two teams of three to battle over a mine in the middle that spits out gems and hold onto 10 of them until a countdown timer expires. Player kills spill any gems they hold onto the playing field, which makes for a nice mix of action and strategy blended with wild swings of momentum.

There are more modes to unlock, including, yes, a kind of scaled down battle royale thing to ensure that the whole thing stays on trend. You’ll need to win some matches in Gem Grab before we can even start discussing those, though, so let’s get you started down the road to becoming a Brawl Stars All-Star, if you’ll excuse the rhyme.

Brawl Stars Basics: How to Move, Fight and Other Important Stuff 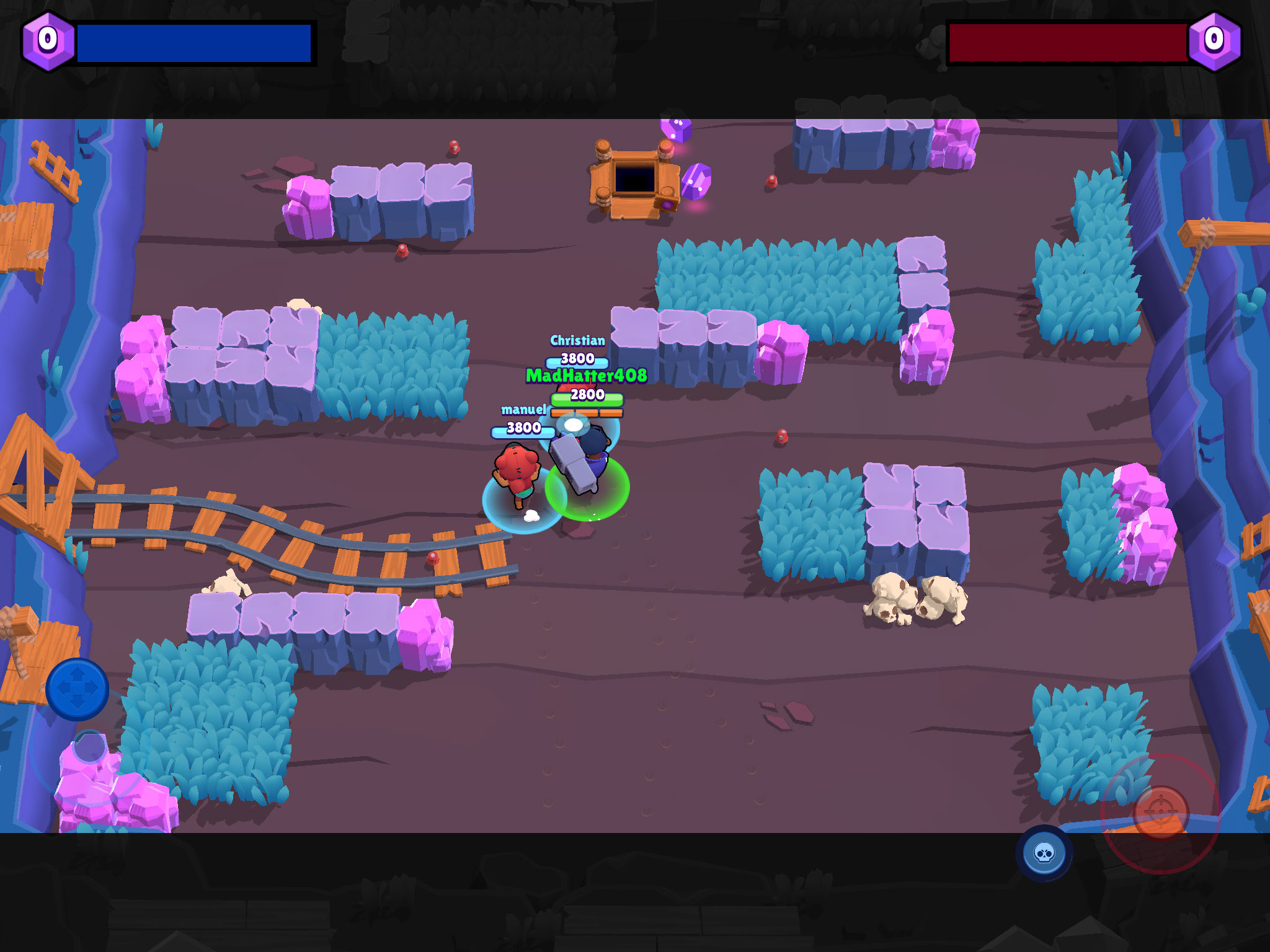 While there are plenty of characters, or Brawlers in Brawl Stars parlance, that all have their own characteristics and abilities, they all have common controls. You move using a thumbstick in the lower-right corner and fire with a button on the right.

Pretty simple, but there are some catches. You’ll see that your Brawler has two bars, one for health (which should be self-explanatory) and the other for ammo. Every character has the same ammo limitation: That bar is split into three segments because you only have three shots before you have to wait for at least one segment refills to fire again. That ensures no one can spam basic attacks, which adds an additional level of in-game strategy.

Every character also has a Super activated by the other button on the right, which needs to fill up before you can use it. Explaining every character’s Super is beyond the scope of this humble guide, so the best way to learn more about them is to go into the Brawler profile the first time you unlock a new character and tap on the ‘i’ icon in the Super description. 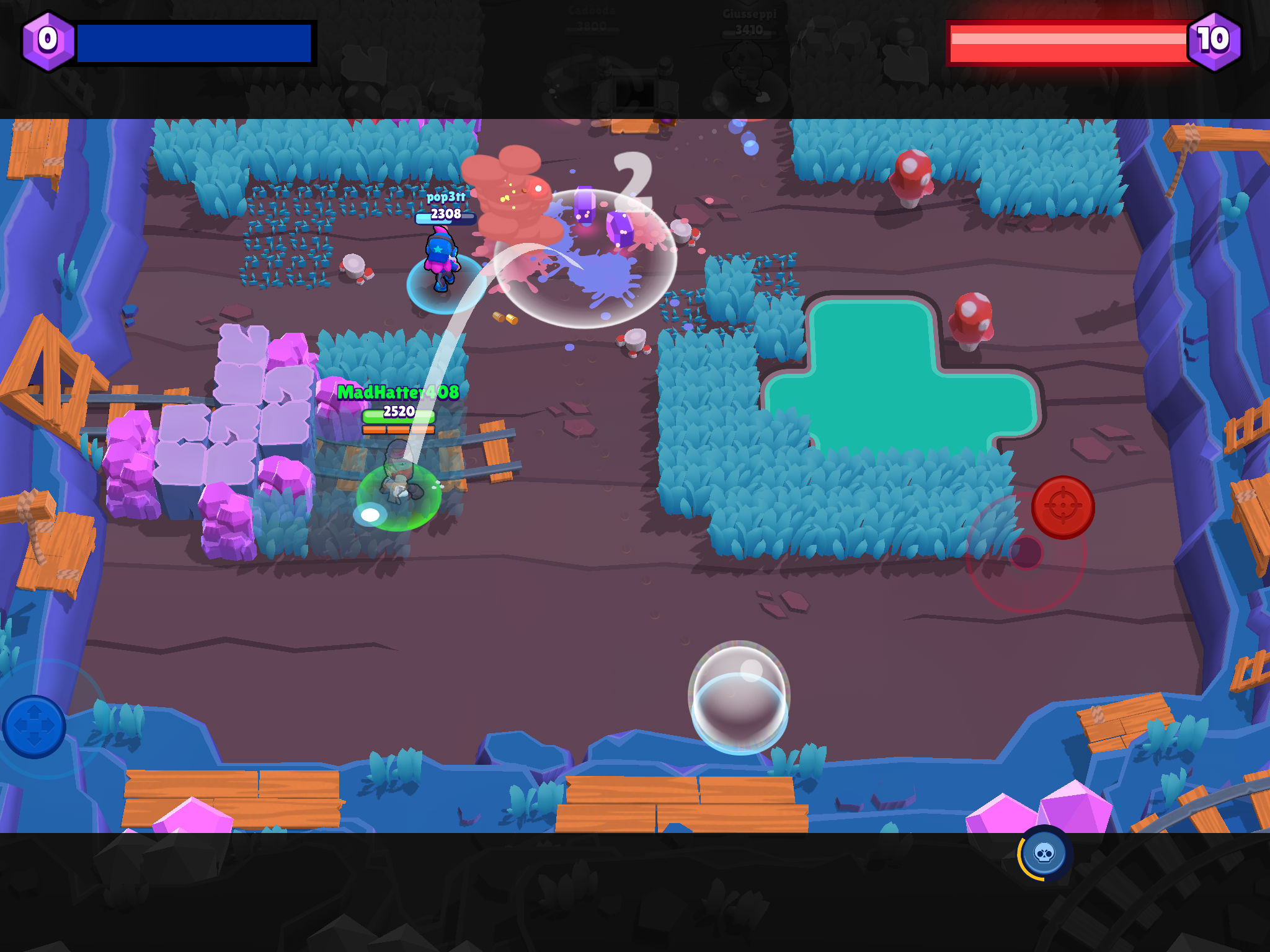 Bonus tip 1 – skill shots: If you just tap the fire button, your Brawler will attack the closest character. That’s fine in a pinch, but if you really want to show some precision, you can tap and drag on the screen for a firing line or arc and aim each shot: Your Brawler will fire once you lift your finger.

Bonus tip 2 – healing: Dying isn’t fun, even in modes where you respawn. To avoid doing so, simply run away (Monty Python voice) and avoid combat for a few seconds and your health bar will start to refill. Firing stops the process.

Brawl Stars Guide to Camping – J/k But Seriously, Cover and Grass and Such

Regardless of game mode, there are a few things in the environment you’ll want to note. The first is the patches of tall grass. If you move into one and stop firing, you’ll be effectively invisible until you decide to reveal yourself by attacking or an enemy goes into the same grass.

There’s also cover in the form of walls, rocks, etc. that will protect you from enemy attacks. That is, unless that cover were to be destroyed somehow … And the somehow is in the form of Supers that specifically do that. It’s good to know if you are playing a Brawler that can destroy cover, and you’ll definitely have it done to you in some matches.

How to Unlock More Brawlers for Free 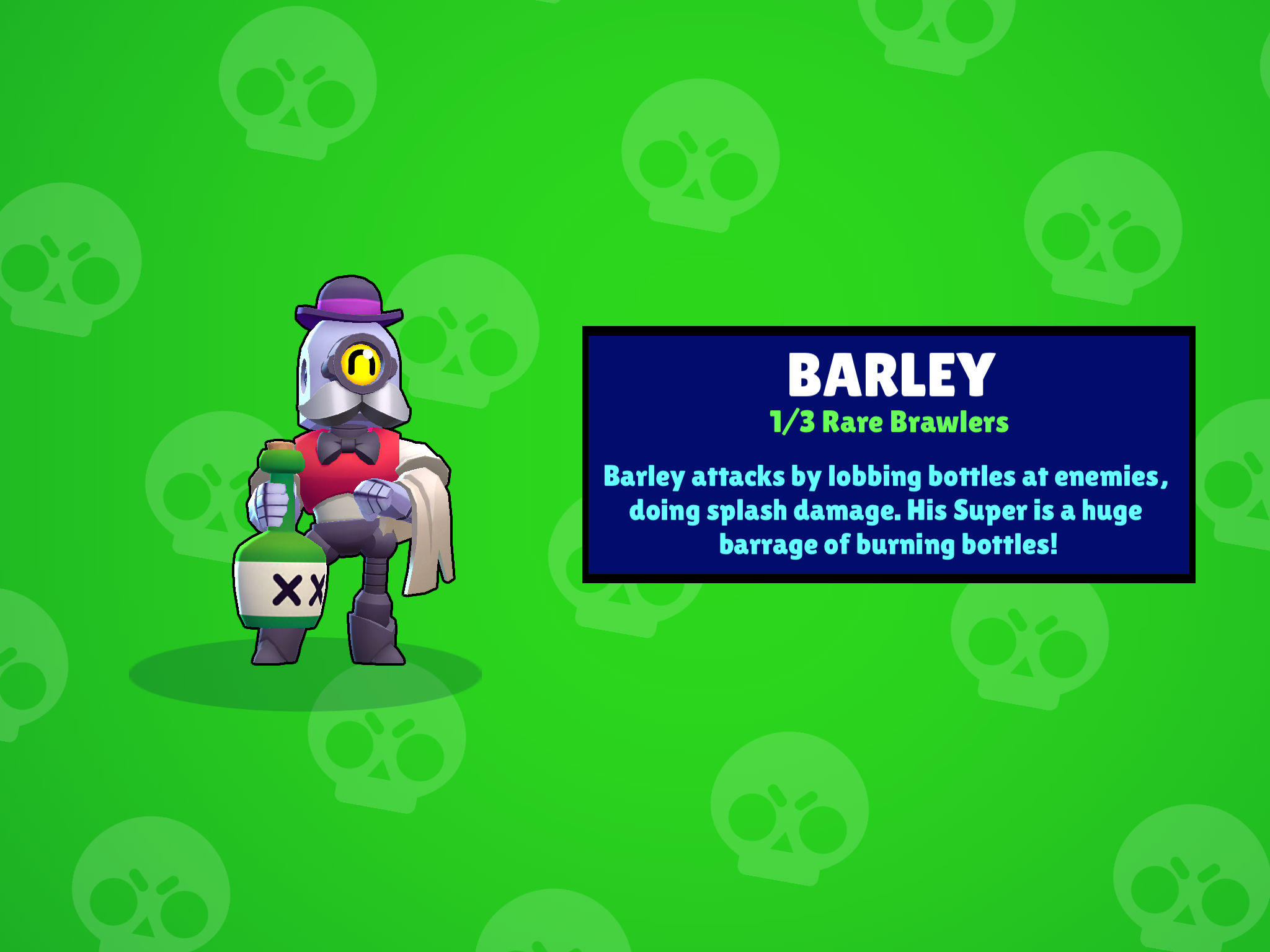 So you’ve gotten the hang of Shelly, the starting character. Cool. Wouldn’t you like to be able to use other Brawlers and have some options in every match? Yeah, we figured that would be the case.

Supercell says there are six different Brawler rarities: Common, Rare, Super Rare, Epic, Mythic and Legendary. Obviously, the further up that list you go, the more difficult a Brawler is to unlock. However, the nice thing is that you really don’t have to spend money to do it.

Let’s take a look at how the different ways to go about it: 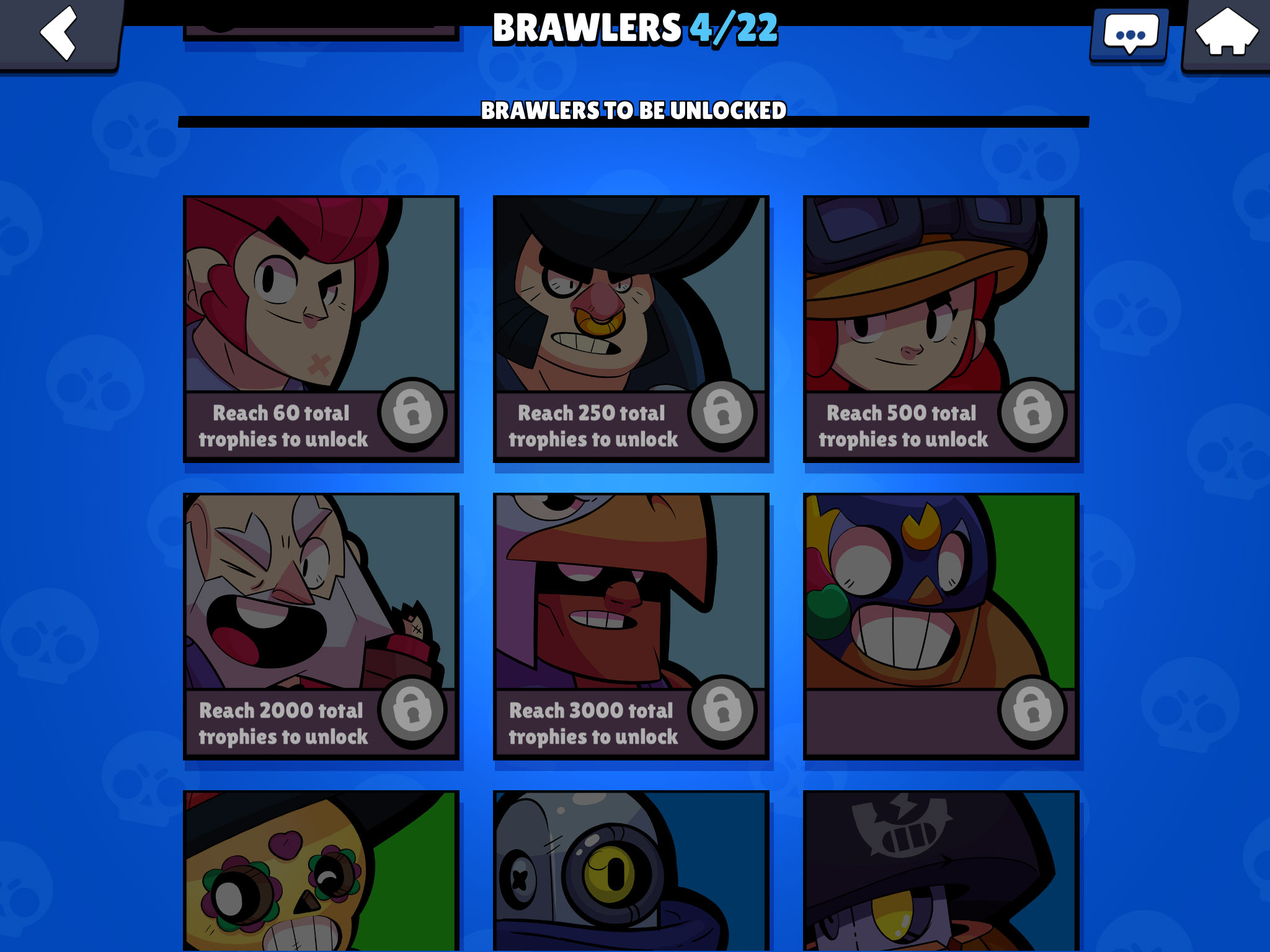 Bonus tip – the trouble with tokens: So you may have surmised by now that you can play Brawl Stars for as long as you want, and there’s no energy system or even times rewards a la Clash Royale, and you’re experiencing a slight feeling of euphoria as a result. Let’s bring you back down to Earth: See that number right above the ‘Play’ button on the main game screen? That’s the amount of Tokens you can earn from matches before you … well, no longer earn them. Basically, you’ll be able to play 10 matches while earning Tokens before you have to wait for that reserve to refill — which it does, over time. SO there’s a subtle limit to play sessions, and it means that the Token Doubler is your friend.

How to Make Your Brawlers Better: Power Points Ahoy

Confusingly, Brawlers have a rank that increases when you win trophies while playing, but ranking up does not increase their stats. For that, you’ll need to get the proper number of Power Points for that Brawler, then spend some coins to bump them up to the next Power Level.

(See, we weren’t lying about how many currencies are involved.)

There’s a happy ending to this story, though, and that’s the fact that you can get Power Points for free too. 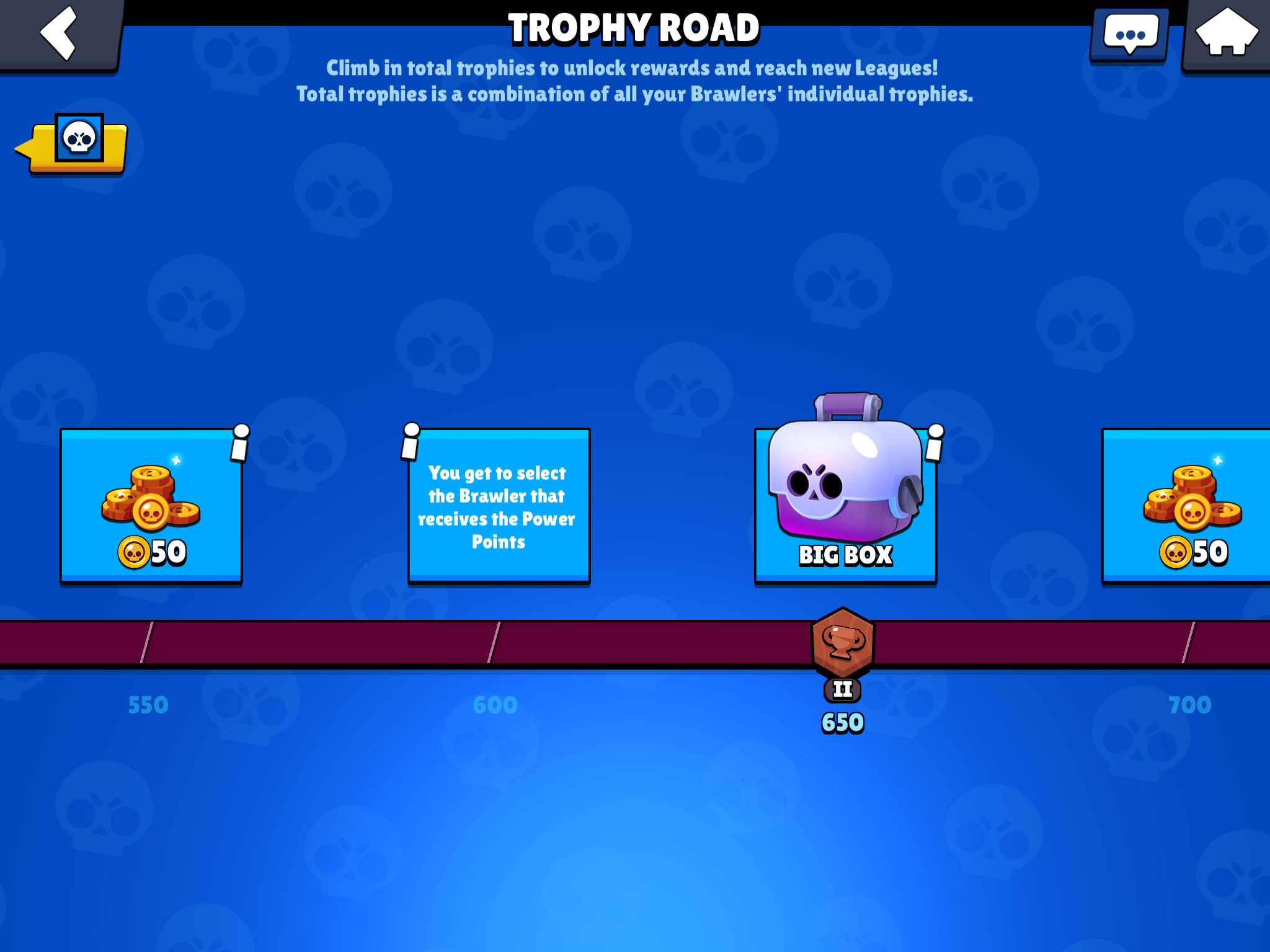 Bonus tip – choosing your own Power Points: Most of the time, you’ll be at the mercy of the gacha/RNG gods when it comes to Power Points, and they can be a fickle pantheon indeed. At certain stops on Trophy Road, though, you’ll earn the opportunity to pick which Brawler you want Power Points for, and you should definitely take advantage of these times to either advance the one you consider a main or one that is closest to the next Power Level.

How to Unlock More Game Modes

Gem Grab can keep you occupied for quite some time on its own, but one of the true selling points for Brawl Stars is that there are other things to do, and you wouldn’t want to deprive yourself of that.

Each additional mode could easily be the subject of its own guide (hmm … ), but allow us to give you a brief overview of what you can be playing if you buckle down and get these other modes unlocked. 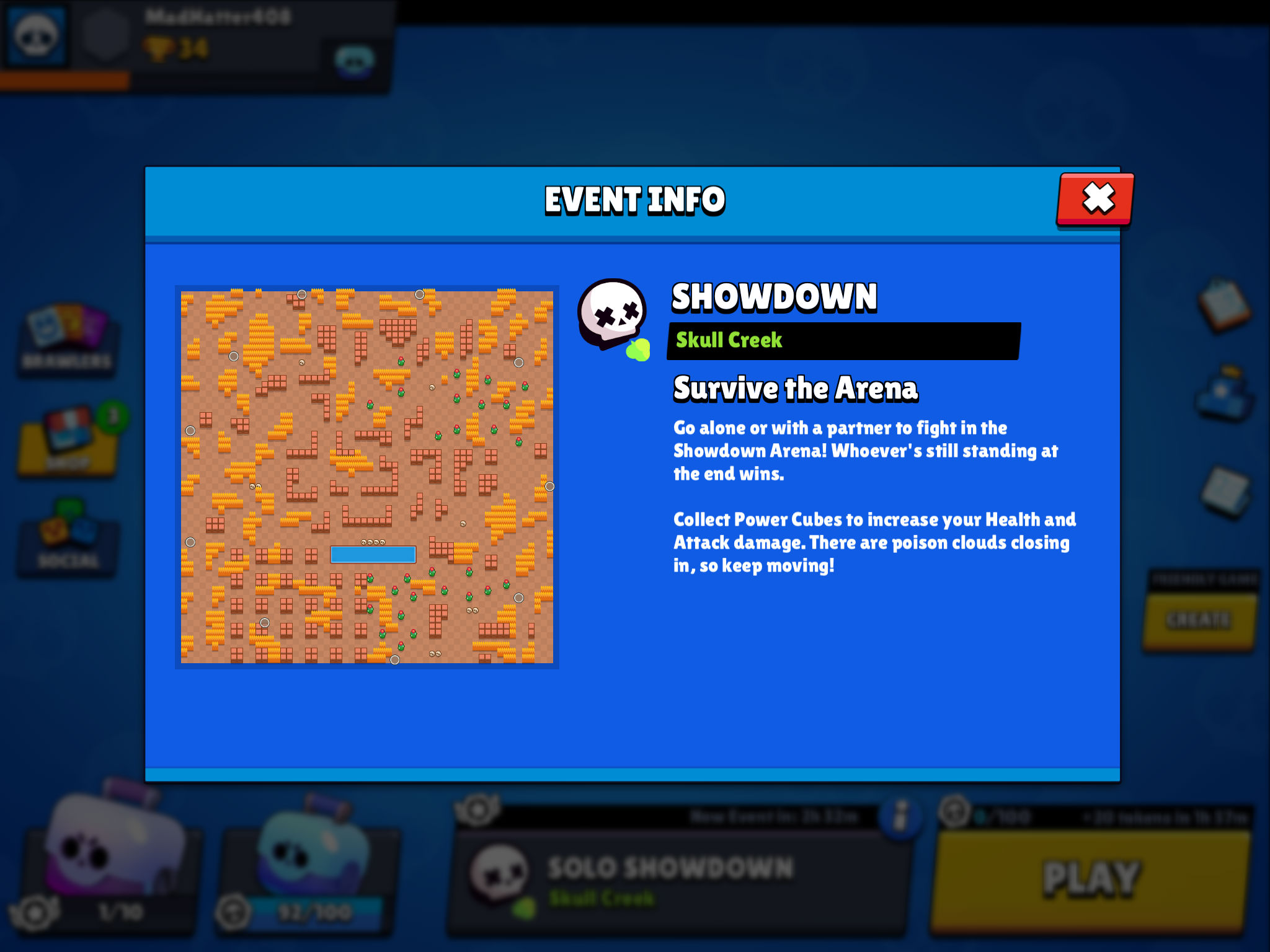 There are additional modes that only arrive for a limited time too, but the good news is that you can play in more of these just by continuing to win trophies. At 150 trophies, you’ll unlock Daily Events, at 350, you’ll unlock Ticketed Events, and at 800, Special Events. So what we’re saying is that at 800 trophies, you’ll essentially have as many as five different modes to choose from at any given time. Variety is the spice of life and all that.