Though the company seems to forget it from time to time, Konami has one of the richest histories of any game publisher around. Despite its recent partial retreat from the games business, the company has had a major presence in almost every generation of gaming since the 1980s. Hits like Frogger, Contra, Castlevania, Gradius, and Metal Gear buoyed the company to dizzying heights in the 8-bit and 16-bit era, and unlike many other publishers who found success in those early generations, Konami was able to carry its momentum forward into the 3D era. Along the way, it also gradually bought up Hudson, another famous Japanese game publisher who didn’t make quite so smooth a transition to 3D games. What this adds up to is that Konami owns a huge amount of Japanese gaming history, and even if it’s not so keen on pushing out new games, it’s at least not shy about exploiting that old catalog.

Still, even keeping all that in mind, Pixel Puzzle Collection (Free) is a bit of a surprising release. Konami hasn’t seemed all that interested in the mobile market of late, at least outside of Japan, and it certainly isn’t known for Picross games or even all that many puzzle games in general. It’s a free game with no IAP at all, and even the amount and severity of ads isn’t terribly out of line. The most surprising thing of all, however, is just how much of both Konami’s and Hudson’s history is included here. Sure, we all know Castlevania, Gradius, and Bomberman. You may even know Mystical Ninja and Twin Bee. But how familiar are you with Roc ‘N Rope, Nuts & Milk, or Esper Dream? The Japan-only dating sim series Tokimeki Memorial even gets a significant amount of attention here. And just to wrap the whole thing up with a nice little bow, Pixel Puzzle Collection is also an incredibly competent take on Picross. One of the better ones we’ve seen on mobile, to be honest. 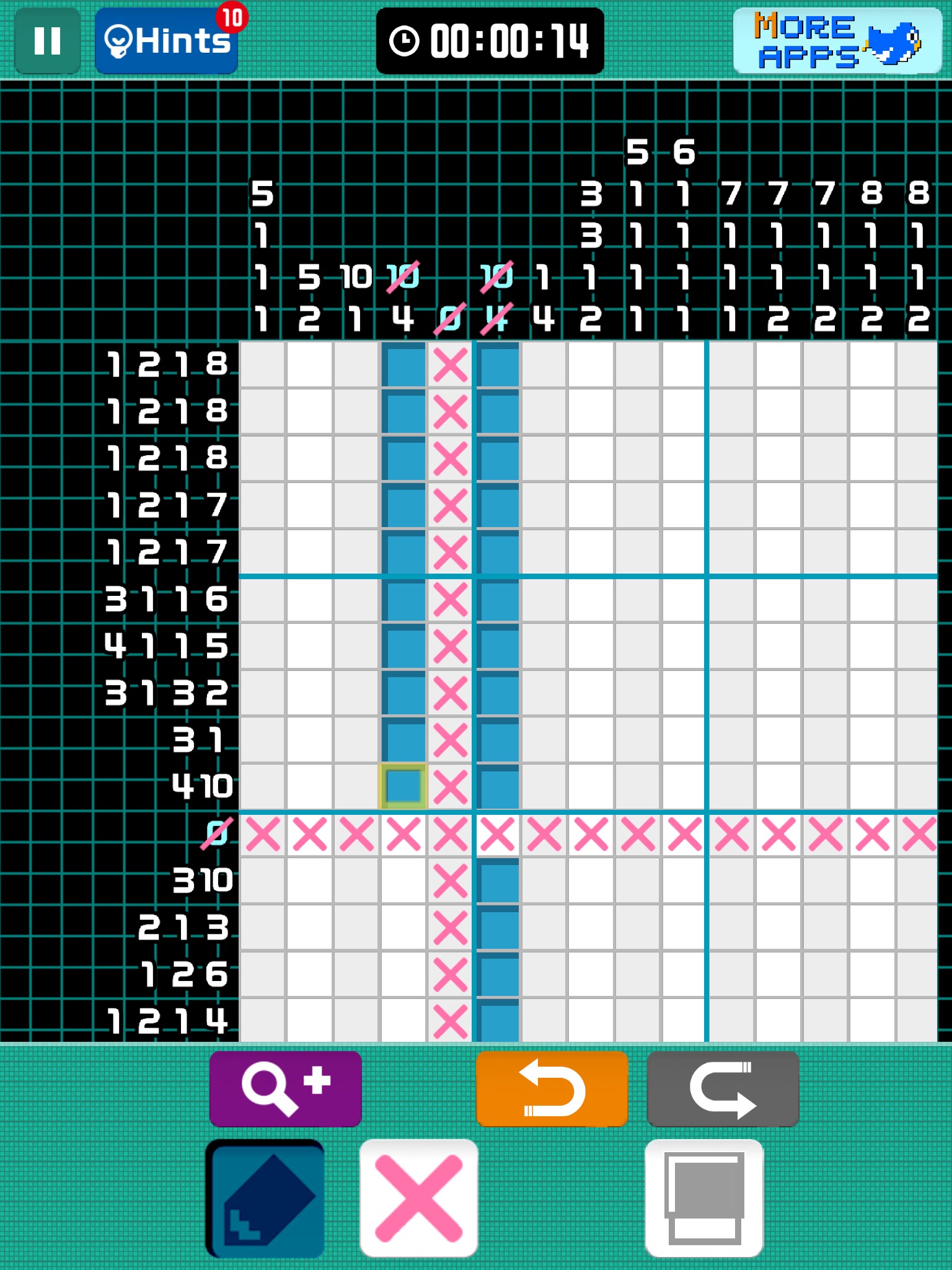 If you’re not familiar with Picross, it’s a type of puzzle where you need to use numerical clues to deduce which squares on a grid need to be filled in. Once you’ve completed a puzzle, the filled squares will resemble a picture of some sort. In this game, those pictures are naturally all either drawn directly from classic Konami and Hudson games, or are pixel-art representations of characters from said games. Early puzzles will use a 5 x 5 grid and take only a couple of minutes to finish at most. As you play, you’ll start coming across 10 x 10 grids, 15 x 15 grids, and so on, allowing for more challenging puzzles and more detailed pictures. The game also contains mini-boss and boss puzzles, where you’ll have to complete multiple larger puzzles to create one large image. Each completed picture is put in your gallery, where you replay it at your leisure or just check out its description.

The nostalgia doesn’t just stop with the completed puzzles, however. Not only is the title screen adorned with sprites pulled from Konami classics, but the background music while you’re playing is also drawn from those games. How do you make Picross better? Well, I’m no scientist, but letting me solve puzzles while Bloody Tears plays in the background is a pretty good start. A lot of Konami’s best games from the NES era were licensed and thus are not included here, so you won’t be able to rock out to the chiptune version of Cyndi Lauper’s The Goonies ‘r’ Good Enough, but there’s still plenty to enjoy. I’m not used to saying this about Konami lately, but there’s a lot more here than I expected.

Controlling the game works as you would expect. You can tap buttons to switch between a fill tool, an X that is used to mark empty squares, and an eraser that does exactly what you would expect. Tap a square on the grid to apply whatever tool you have equipped to it, or hold and drag to fill in multiple squares at a time. You won’t be penalized for making mistakes, but the game won’t go out of its way to show you where you made your mistakes, either. One nice point is that if you leave the game on its default settings, it will automatically fill in a row with X marks if you’ve filled in the proper amount of squares. Note that this does not mean the row is correct. There are sometimes many ways to fill in the correct number of squares, and only one of them will be right. Veteran players may therefore want to turn this feature off, lest it cause issues. 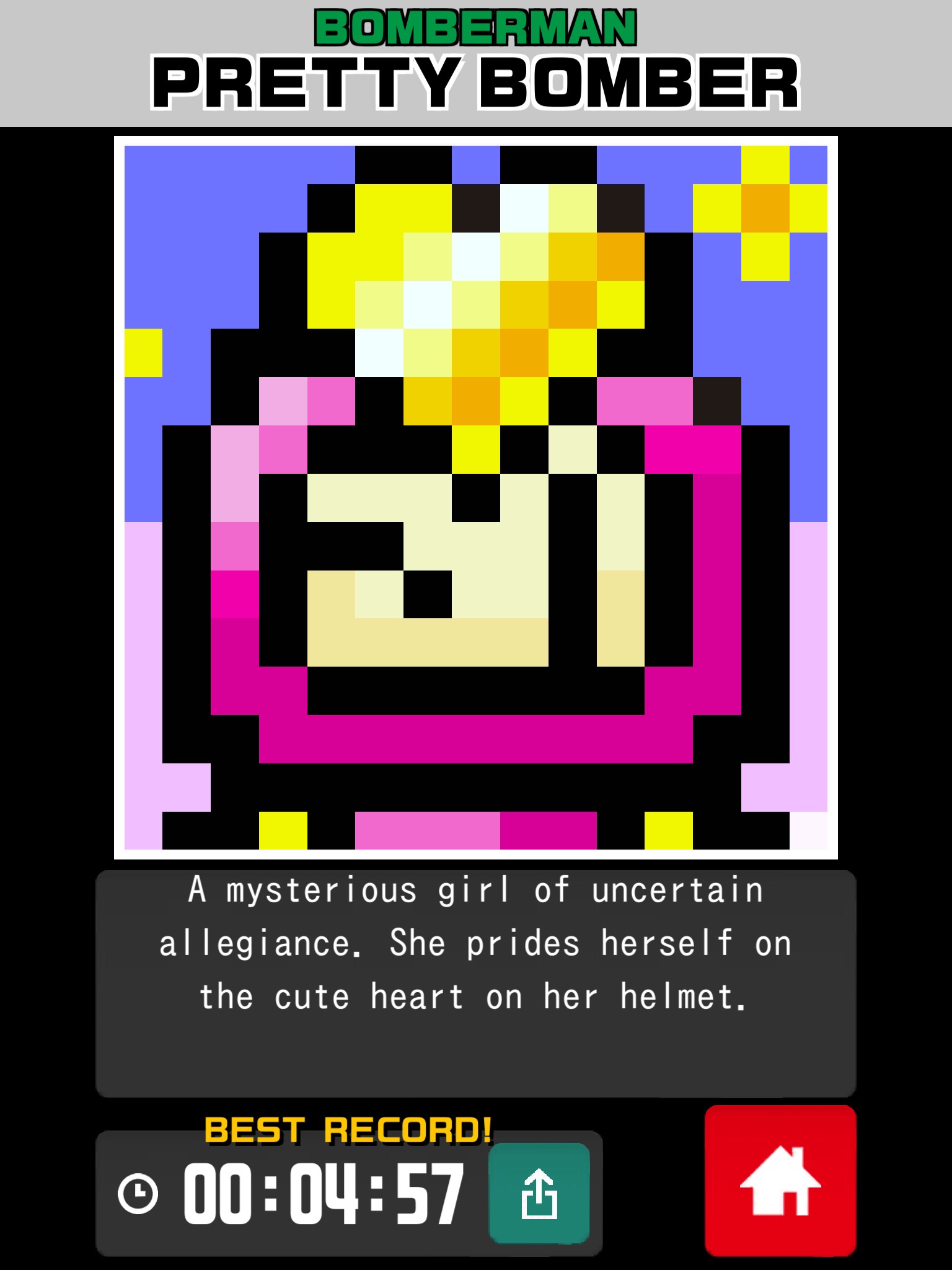 The most unusual thing about Pixel Puzzle Collection is in how it distributes the puzzles. Some Picross games let you pick whichever puzzle you like, whenever you like. Others make you unlock things in a predetermined sequence. This game, on the other hand, throws randomly-selected puzzles at you from a pool made up of all incomplete puzzles. Once you’ve finished one, you can choose it and replay it whenever you like, but most of the game will be spent dealing with whatever pitches the game decides to throw at you. As you complete more puzzles, you’ll unlock extra slots and eventually a boss battle mode. The extra slots are there so that you can have multiple puzzles on the go, just the thing if you’re stuck on one and want to try another. Unlocking the extra slots also seems to open the floodgates on the larger grid sizes.

The boss puzzles work a little differently. They’re on a four-hour cooldown timer, so after you’ve completed one, you won’t be able to tackle another for a little while. Since the boss pictures are made up of multiple puzzles and you’ll be thrown a random one each time, it can take a long while to complete any given boss picture. Still, it’s the only part of the game that has any real restrictions on it at all, so it’s hard to be too cranky about it. All of the rest of the puzzles can be taken on one after the other so long as you’re game for it. Note that the boss pictures aren’t necessarily pictures of bosses, as well. They’re just big pictures drawn from the featured game.

I’ve only got a few criticisms of the game on the whole. It can be a little tricky playing the bigger puzzles on an iPhone screen, even with a zoom feature in play. There are certain big franchises that are missing from the line-up, even beyond the licensed properties. I wish there were more music tracks in the game, though that’s just me being a bit greedy. Picross games usually only have a few tracks that play in the background, and this one already has several. The boss timer means you’ll have to play the game over the course of a long period of real time if you want to solve everything. Veteran players have no way to skip the simpler puzzles and get right to the more interesting bigger ones. 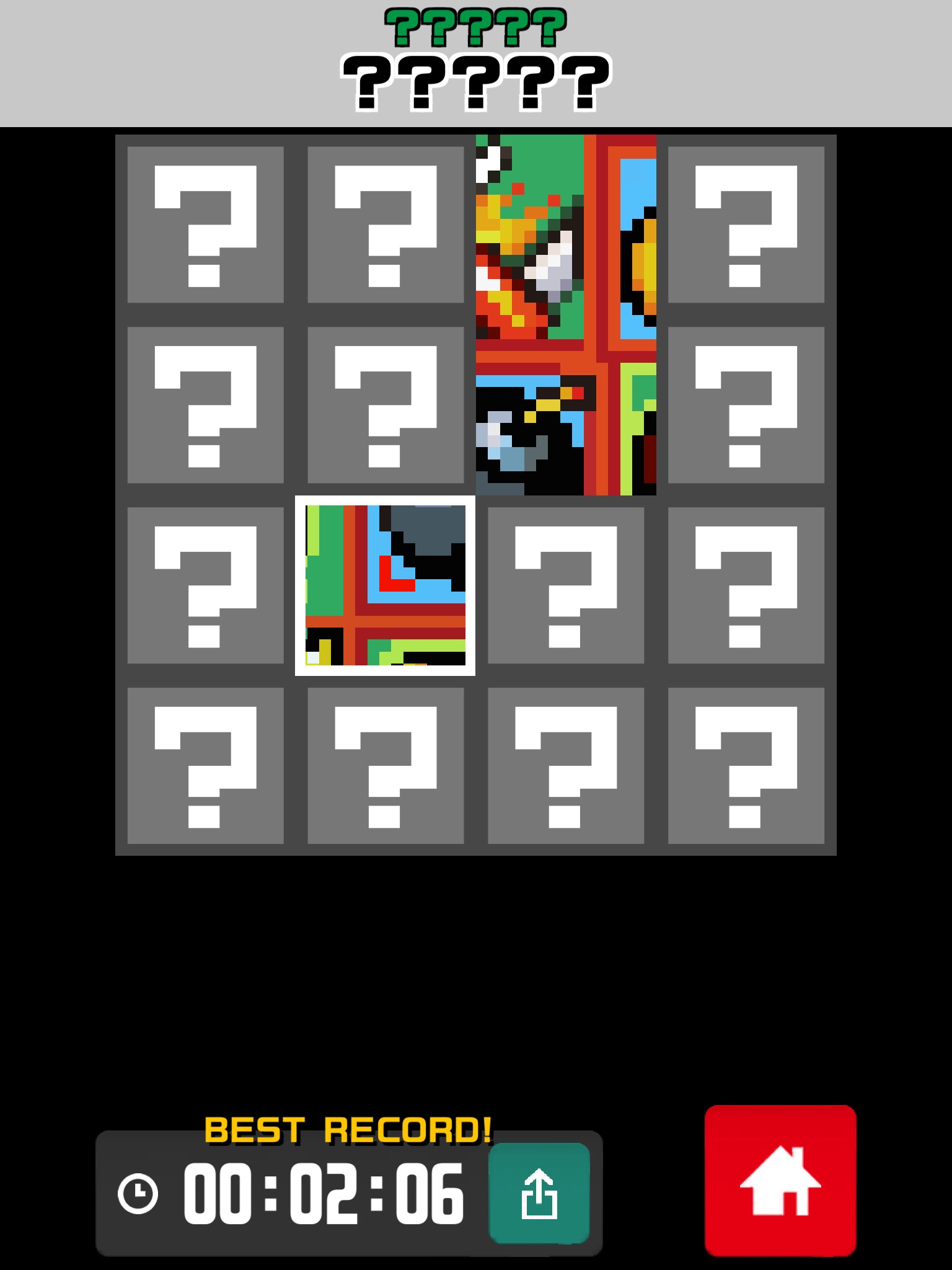 Of course, there’s also the matter of the ads. There’s nothing you can really do about them, since the game has no way to pay your way out of them. That said, they’re not that bad. After finishing each puzzle, a banner ad for some Konami product or another will appear, and is easily dismissed. You’ll also see banner ads while you’re on the title and puzzle selection screens, again mostly for Konami products. You won’t typically see any ads while you’re playing a puzzle, though, and that’s a little unexpected. The whole game basically acts as a giant ad for Konami’s IP, so I suppose it’s not that shocking that it doesn’t need to go whole-hog on additional ads.

If you like Picross games or classic Konami and/or Hudson releases, you’ll probably get a fair bit of enjoyment out of Pixel Puzzle Collection. If you like both, you’ll likely pick the bones clean on this thing, something that will take more than 10 hours of playtime thanks to the rather large amount of puzzles. Setting aside the mandatory ads, this is one of the best things I’ve seen come out of Konami in quite a while. Imaginative? No. I mean, it’s just Picross. And it’s certainly trading heavily on nostalgia. But it’s a very well-done take on that kind of puzzle, and I’d be telling one of the biggest lies in my life if I said the window dressing hadn’t scored a direct hit on me. I hope the game gets updated with more franchises, puzzles, music, and perhaps some larger grid sizes, but what’s already here is incredible for a free game.