Saying I’m fond of mobile puzzle games is an understatement, as the genre has provided me with amusement (and sometimes distraction from life) for uncountable hours of the past year alone. Despite the numeros titles I’ve been through, all seem to share common traits, including timed levels, opportunities to watch ads (even in paid games), and times of absolute frustration as a level cannot be passed for weeks at a time. But ELOH ($2.99) takes these puzzle conventions and throws them out the window, and the result is a soothing, sound-focused puzzle title featuring hand-painted visuals.

ELOH is steeped in what is best described as an Aztec/rainforest theme, despite the developer being Austrian. The graphic borders and choice of animal spirits is the main reason I say this, but as with all aspects of the game, sound is not to be ignored. The background sounds are noise, not music, as the music is in the puzzle itself. Instead, the background sounds consist of birds chirping and a gentle low hum. 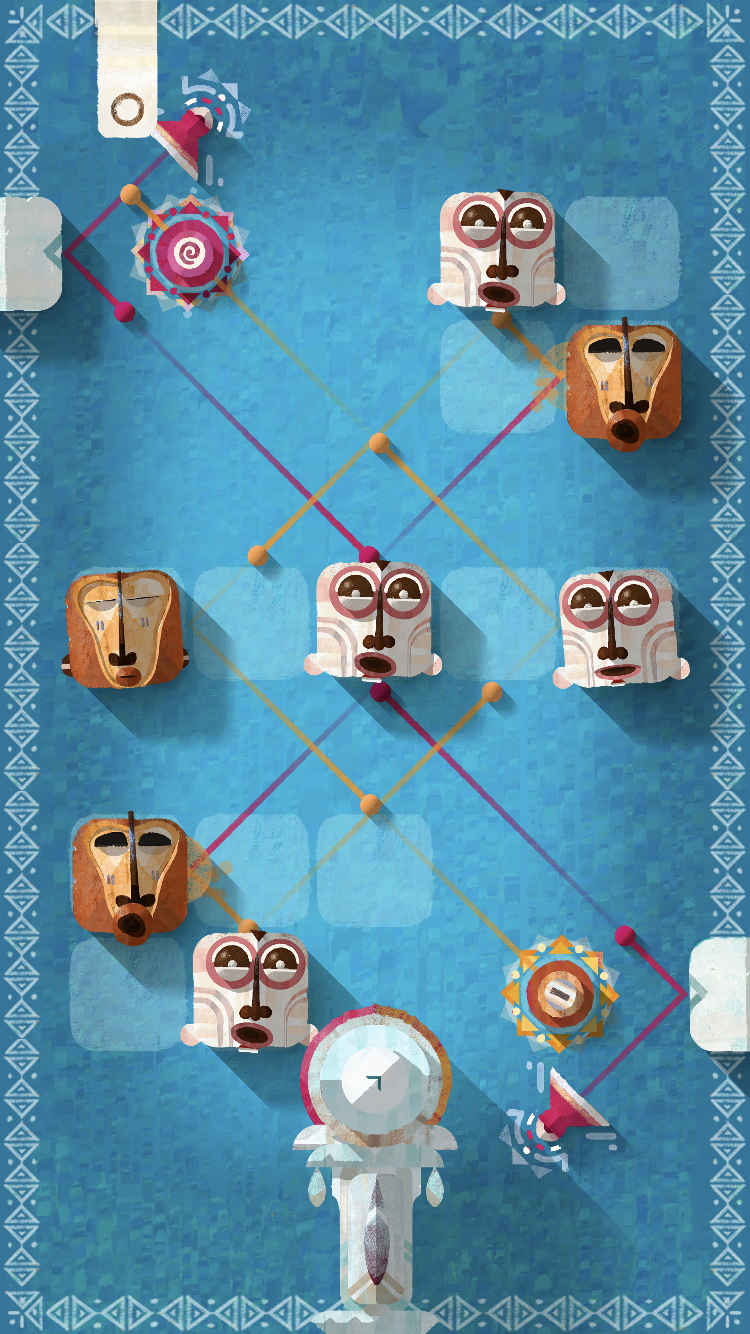 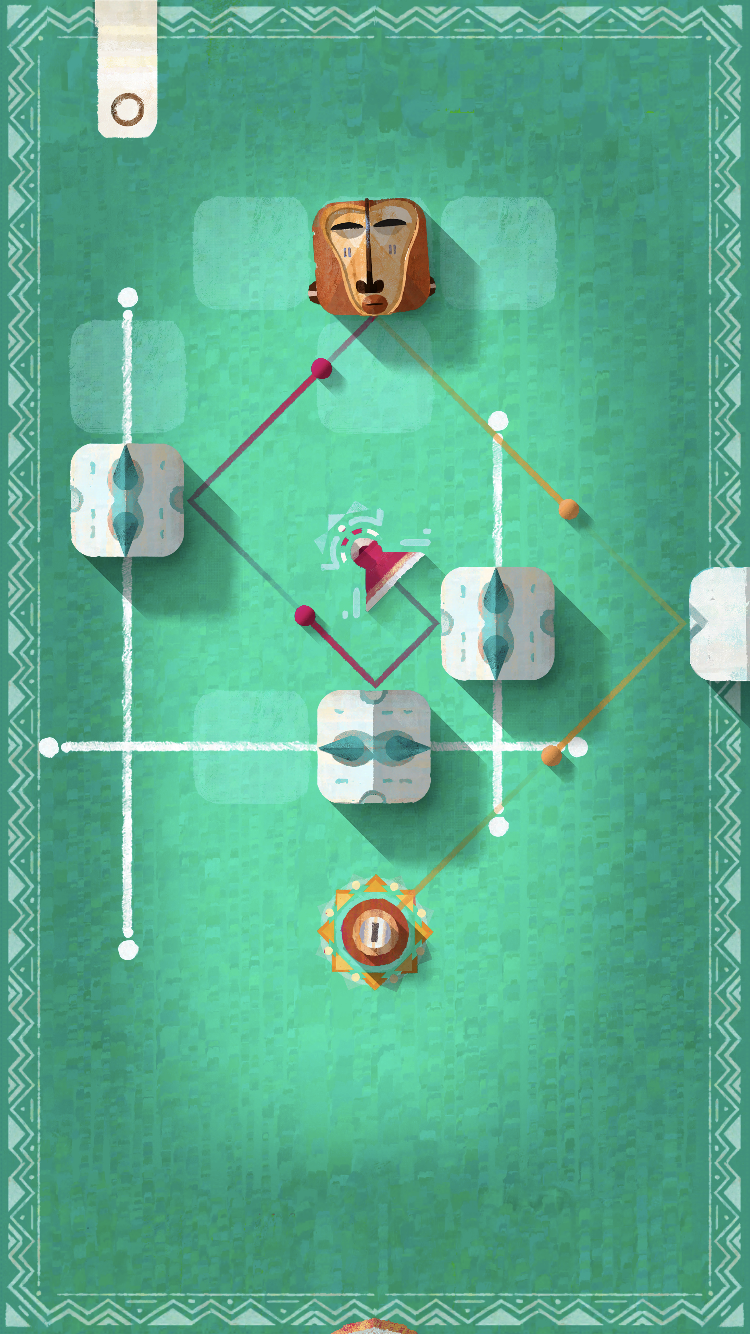 The game uses sound to guide the player to the answer. The goal is to get the correct sound to the correct endpoint, with different sounds being marked by different colors. In the beginning, you move spirit animals to guide the sound; as the game progresses, other elements are introduced. It’s all about finding the correct angles, and having squares to indicate where the spirits can be moved is integral to the calming gameplay. If spirits were able to be moved anywhere, it would be far too open-ended.

The spirit animals are square tiles able to be moved around. There are several varieties, each with its own distinct look and sound. They even have perfect little facial expressions that change gleefully as sound bounces around among them. The animals remind me of something that could be stacked in a totem pole, and it’s with them that the fine artistic craftsmanship is truly showcased. Each tile isn’t just a square with a face, it’s a personality relating to the animal itself. The first animal, resembling a sort of white chimp, is kind of goofy and clearly happy; the second is another sort of chimp, but with a much more zen attitude that is reflected in its droopy eyelids and ajar mouth. 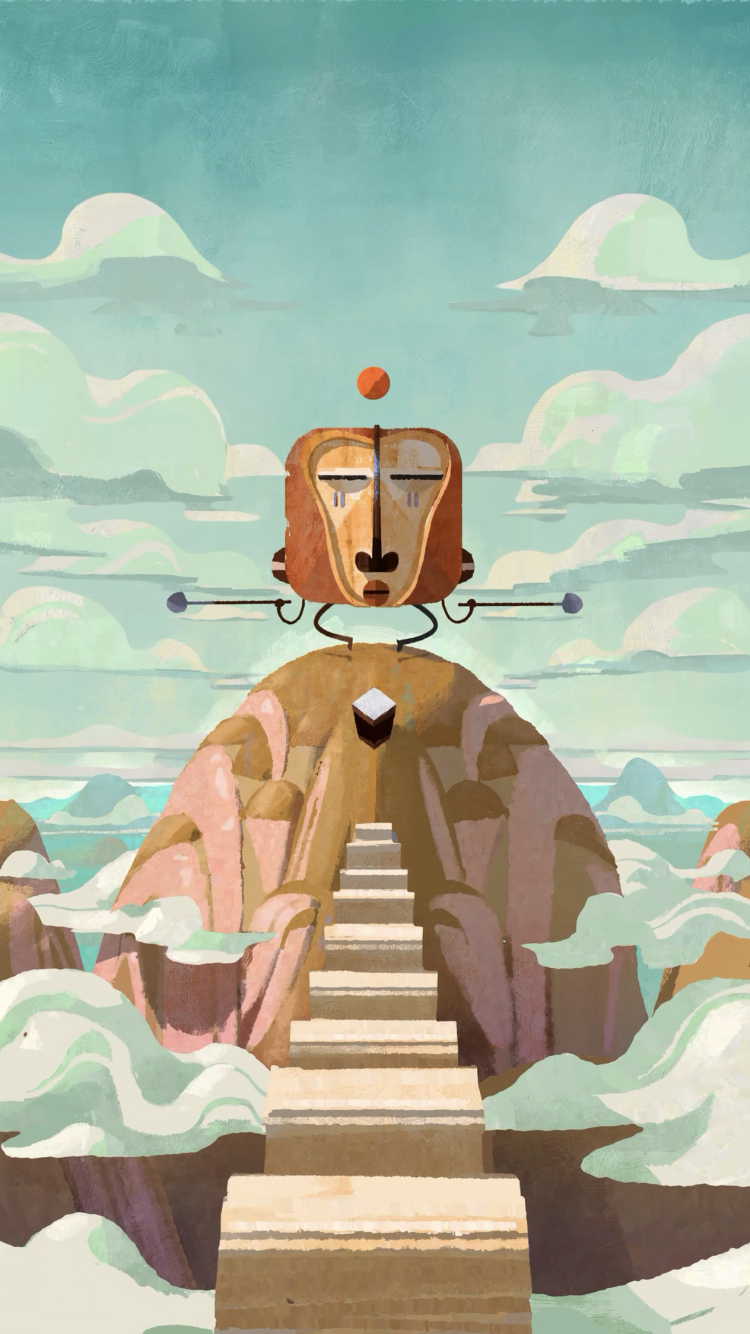 This is what I immediately loved about ELOH – the emotions the art and sound evoke. The sounds match the animals. For example, the white chimp I mentioned has a more high-pitched drum sound when the beat bounces off of it, whereas the zen chimp’s drum sound is much lower. And the sound isn’t just for another layer of entertainment, it truly becomes integral to solving levels. When a level is cleared, the beat just feels right, as though it’s bouncing off each negative thought in your mind and, in the end, reaching a happier place because of it.

I understand that referencing emotion as a way to solve a puzzle game is, well, unconventional. And I honestly don’t know if that is what the developer was going for, although I do know the soothing feel was at least intentional. In my life, it seems that the only way I can solve problems is to panic and remain that way until there is no longer an issue. ELOH reminds me that the solution doesn’t have to be reached with anxiety; instead, solutions can be found by taking a moment to just listen to the beat in your own mind.

The learning curve is gentle. It begins with one type of animal. Then two. Then sliding switches are added, which is probably the biggest difficulty jump as you learn to use the animals to place the sliders properly – but you learn to operate the switches without animals, making that level of learning quite simple still.

All movement happens with direct gestures. Touch and drag a spirit to where you want it to go, and that is where it where it will go. Even moving the spirits and switches seems soothing, in an odd/surprising way. Nothing is made complicated. Even the user interface is easy, with only a couple clicks and swipes needed to access old puzzles or restart the current one anew.

ELOH is a premium game, with a one-time price and nothing more. You will never see an in-app ad, or receive an offer to watch one to receive an in-game bonus. Ads would, after all, remove the soothing element from the game: it’s not easy to feel stress-free and invested in a title when you need to watch an ad for a tactical war game or the like every five turns. [Editor’s Note: Amen!]

What’s interesting is how long the feeling of calm associated with the game can stay with a player once they put it down. If I play in the morning, I’ll hear the “ping-ping ping-ping” of ELOH clear through the afternoon. If I’m stressed, I can return to an earlier level and crank the volume, making my phone vibrate with every beat, becoming a tactile experience in addition to auditory and visual.

I think it’s obvious that I really appreciate ELOH. It’s a true meditative experience via a game with cute little animal faces, which was an unexpected factor. Every factor enhances the experience, from the chirping birds to the different drum sounds, and to the chimps’ eye-popping glee when the beat touches them. Even business decisions seem to have been made with the player’s stress levels in mind, keeping in-app ads away and instead using one low price for the entire 85 levels of play. I can not recommend it enough to anyone that finds the stressors of living in 2018 just a little too much to handle.