Owlchemy Labs brought out some interesting VR experiences over the last few years on both PlayStation and PC platforms. They were recently acquired by Google and while most VR games don’t really interest me, AR has always been fun to see as something evolving over time. Owlchemy Labs just revealed a new experiment showcasing VR and AR interacting through multiple devices and I hope we see many developers implement this going forward for a lot of reasons.

Mobile Spectator is an AR spectator camera for phones and tablets from Owlchemy Labs that aims to bridge the gap between someone experiencing something in VR and everyone else interacting with the same person through AR. AR has none of the restrictions that Mixed Reality has for the most part and the team showcases a nice way of people interacting with someone in a head mounted display through AR. While this currently uses ARCore on Android, it is likely they could do this for iOS as well through ARKit. A smartphne camera syncs with the VR headset through a simple procedure and there is a PC doing most of the heavy lifting here for an experience where everyone can interact with someone using a VR device. Owlchemy Labs tested this in their upcoming Vacation Simulator for nice results. A flowchart of how things work is shown below: 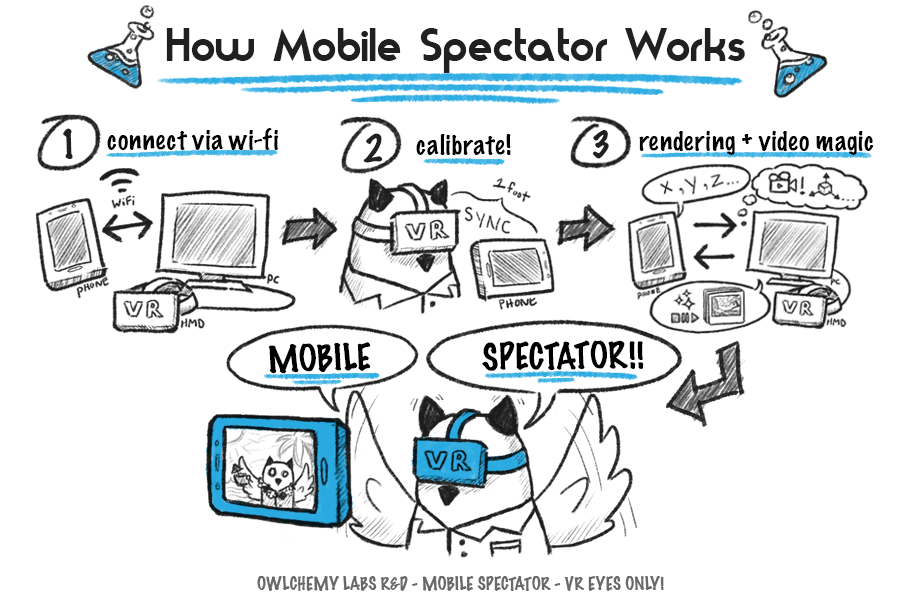 I didn’t really think of something like this while seeing AR and VR games release over the last few years. This is a great way to make it so that someone can play in VR while others aren’t left out thanks to an AR component on their phones. The biggest downside right now is the high spec PC required for heavy lifting. Hopefully we reach a point where new phones can run something like this without issues. Read more about the experiment here.