If the title of this game, Returner Zhero ($4.99) sounds familiar, that’s because developer Fantastic, yes, also released a game with a very similar name less than a year ago. Returner 77 was a space-oriented game in which your character was tasked with solving puzzles in order to survive. Perhaps unsurprisingly, the same premise is in play with Returner Zhero, although with slight plot twists that we’ll come to in a minute.

As the title may suggest, Returner Zhero is actually a prequel, with your new character being the first person to be sent to the alien ship as part of a science mission following the arrival of said aliens to Earth. Those aliens have dispatched a giant lazer beam, one which penetrates the Earth’s core. You’ve been sent on a recon mission of sorts, and again, you’re going to need to solve puzzles in order to get things done. Yay! 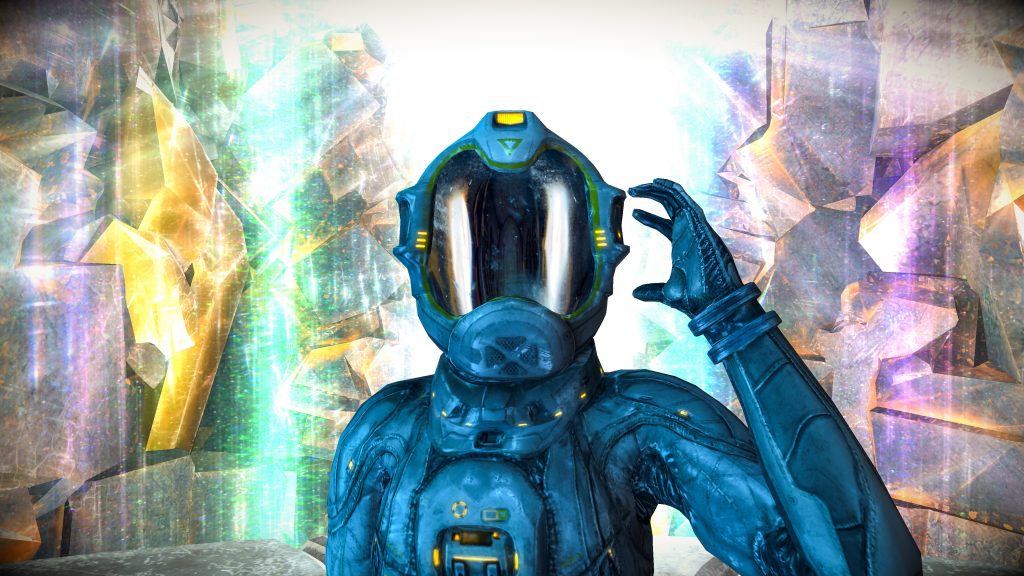 If there was one thing that Returner 77 had going for it, it was its overall aesthetics. If you’re a fan of console games like Dead Space then you will immediately feel right at home in either that original game or Returner Zhero. Dark, cold and atmospheric are three words that I’d use to describe the environment you will be tasked with traversing. There’s also a distinctly Halo-like vibe going on which, honestly, ticks all of my boxes for this kind of game. There’s an argument for the visuals not being quite as impressive in this prequel as they were in Returner 77 but I may be nitpicking here. Played on a modern iOS device, Returner Zhero looks lovely.

Actually playing the game is a sort of point-and-click affair, rather than a roaming open-world one. Gamers scan the area ahead of them and then double-tap points of interest, at which point their character will interact with them. That invariably leads to a puzzle of some kind, and that’s where things can, unfortunately, go a little awry. I like puzzles as much as the next introvert, but unfortunately, there is a degree of repetition here that I didn’t wholly enjoy. If you’ve seen one puzzle where you need to get a lazer from one place to another by moving things around, you’ve seen them all. I also hit one-too-many spots where the puzzle just wouldn’t behave as the developer expected, with mechanisms not reacting to touches and the like. Bugs happen, absolutely, but in a game where you can’t progress because a touch target won’t register a tap, things start to get annoying, fast.

All that is a shame, because when it’s firing on all cylinders Returner Zhero is a great little game. Actually, calling it “little" is doing it a disservice because there are hours of fun to be had here, assuming you have the perseverance required to beat some of the more cerebrally challenging puzzles into submission. One tip I would have is this though; don’t try to follow the story too much whilst playing because, unless I just missed something somewhere, it’s bordering on the indecipherable. I never really felt like I understood why I was there or what I was trying to do in the grand scheme of things. I got that I needed to follow my nose and solve puzzles as I went, but why? What was at stake? What would happen if I failed? Ultimately, if you can play for the puzzles and the atmospherics – the sound is top-notch throughout – then you’re going to be just fine. Try to work out what’s happening in the timeline, especially with Returner 77 thrown in for good measure, and it’s crazy-making. My suggestion is to put some good earphones in, turn the lights down and just enjoy what’s in front of you without thinking about the whys and wherefores.

All this leaves me with a quandary as to what score to bestow upon Returner Zhero because on the one hand it infuriated me at times, and as I type I still don’t really know what was going on at times or why I was solving certain puzzles. But on the other hand, I enjoyed playing the game. I enjoyed the tension the soundtrack provided and I felt great after I successfully beat a tricky puzzle into submission. I’d suggest there’s enough here to warrant the $4.99 expenditure here, and it’s clear a third game is likely to follow. If you are able to discern the story and timeline, and enjoyed Returner 77, that alone makes this a must-buy. Otherwise, I’d still say it’s worth your time and importantly, your money.