One of the best ways you can support TouchArcade is by doing your Amazon shopping through a TouchArcade affiliate link. We’ve set up the easy to remember toucharcade.com/amazon too if you want to type that in or bookmark it. We get a small percentage of anything you buy through any of these links, which otherwise would just go to financing Jeff Bezos’s experimental pizza bagel flavors or whatever else he’s up to now, and it goes a long way to supporting the site at no additional cost to you. These Amazon Items of the Day articles are all products we have used ourselves, and feel are things that the TouchArcade audience might be interested in! 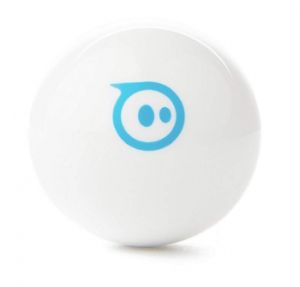 All the way back in 2011 we got our first look at the Sphero. Basically, the device is/was an app-enabled ball that connects to your smartphone via Bluetooth and you can roll it around either by tilting your device or using on-screen controls. I originally thought it was sort of dumb, and the original pre-order price of $129.99 was absurd… Then I played with one at E3 a few months later and bought it on the spot.

It turns out that actually fiddling with one of these things is shockingly fun- Particularly with the obstacle course they had set up. Fast forward a few years and Sphero has grown their brand of Bluetooth controlled balls into something that is featured in the new Star Wars movies. BB-8 is made by them, and the BB-8 Sphero toy was the hottest thing ever when the first of the new Star Wars movies was released.

Well, if you’ve always been curious about Sphero toys but never really wanted to fork out the cash for one, the Sphero Mini is on sale for $36.00 today on Amazon, down from its usual price of $49.99. Specifically, the white ball is on sale, there are other colors, but they’re regular price. The Sphero Mini works with the various Sphero apps, it’s just smaller, and cheaper. As shown in the above video, you can use an app to control the ball, and you can also use the ball to control the few games that support it- For instance, there’s FlappyBall for Sphero (Free) which is basically Flappy Bird controlled with a Sphero.

I primarily use my Sphero to screw with my cat, and the Sphero Mini will definitely do the trick there. He really has no idea what to do when a ball chases him, which is pretty hilarious. This isn’t my cat, but you get the idea:

Thanks for checking out today’s Amazon Item of the Day, and as mentioned before, even if you’re not interested in this particular product, buying things from Amazon by first visiting toucharcade.com/amazon is immensely helpful in supporting the site at no additional cost to you. Additionally, if you’re ever thinking of signing up for any Amazon services, we’d really appreciate if if you’d do it through these links:

If you want to take things a step further, you can check out our Patreon, but either way we just appreciate you sticking with us and continuing to both visit and contribute to the TouchArcade community over the years! If you’ve got a product you’re interested in seeing featured in an Amazon Item of the Day, don’t hesitate to reach out. The best way to get in contact with us is via email at [email protected] and be sure to include “Amazon Item of the Day" in the subject.