When you’ve got a stranglehold on one particular niche, it doesn’t make much sense to give it up. Gameloft has no intentions of doing so with its latest entry to the Asphalt series, entitled Asphalt 9: Legends. The franchise that started all the way back on the Nintendo DS in the bygone era of 2004 before moving to mobile has survived as long as it has by emphasizing high-energy, arcade-style racing over anything close to a driving simulation, but doing it in real world cars.

Asphalt 9 adheres to that winning formula with dozens of cars already available in soft launch in markets including the Philippines and Australia. The build Gameloft was showing off at E3 had several vehicles from each class in the game unlocked, removing the need to work for them that is generally a big part of free-to-play racing games. That said, it was cool to see all the customization options for them, including paint colors you’d be able to buy in real life ( you know, if you could actually afford to just roll up to the dealership and plunk down the dough for a Bugatti Chiron) and the ability to concoct just about any other color you could imagine.

As a direct sequel to Asphalt 8, Legends features the same kind of action movie-esque driving that defined its predecessor. That means tons of boost, ramps and jumps of various varieties, and dedicated virtual buttons to make you do 360 spins, the better to knock opposing cars out of your way. While stunts are optional, the fact that you earn more nitro to go faster means they sort of aren’t at the same time. The nitro pulse returns after taking the last Asphalt installment off, allowing you to go even faster when you activate its purple splendor.

One of the big selling points of Asphalt 9 is the most options for driving controls in the series to date. The tap steering and tilt-to-steer choices should be familiar to anyone who’s ever played a racing game on a phone or tablet. The newcomer is called TouchDrive, and it’s an interesting addition for new players or anyone who might only have one hand free to race. Instead of controlling the car’s every move, TouchDrive presents you with two or three icons at the top of the screen that indicate if there are boosts or ramps coming up on either side of the screen or right down the middle. With a simple swipe, you send your car to that region of the screen, though you still have the virtual buttons to drift or activate nitro as needed. If a standard racing game and an endless racer could conceive a child somehow, TouchDrive would probably be the product of their genes.

In practice, it works pretty well, allowing you to reap the benefits of various sections of each track even though you aren’t in full control. If your only intention is to play the game casually when it hits its full release, TouchDrive could be a helpful tool, something that could be the racing game equivalent to auto or assisted play in mobile RPGs. Gameloft didn’t say for sure whether it would be allowed or somehow limited in Asphalt 9‘s eight-player multiplayer races, but my guess is that using it would be its own disadvantage, not a crutch, since it sure feels like skilled drivers will be able to go faster by using one of the other control schemes. 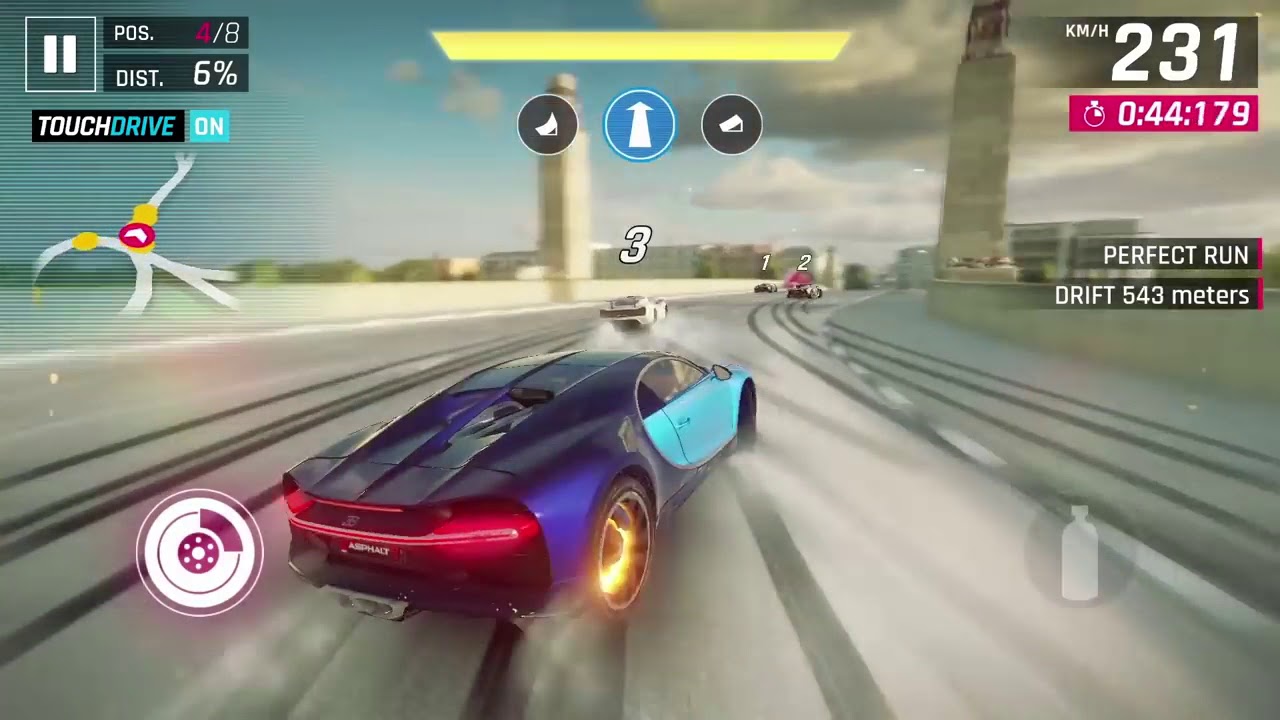 One thing that’s less uncertain is that Asphalt 9: Legends looks phenomenal, as I played it on a phone and watched more gameplay demonstrated with it hooked up to a monitor, and the visuals popped either way. Good looks have always been a hallmark of the brand, and one imagines that car manufacturers would not be so eager to partner with the game given its less serious sensibilities if there wasn’t some serious attention to detail in that area. Car lovers won’t be disappointed, and everyone else will just say that it looks pretty.

Gameloft admits that Asphalt 9 is going to have trouble running on lower performance devices, but it intends to keep supporting Asphalt 8 so that mobile gamers without the latest phones will still be able to get their adrenaline fixes. There’s still no exact release date for the worldwide launch for Legends, but the fact that it’s spread to even more soft launch markets is a pretty good sign that the time we can expect it for our iPhones and iPads is growing ever closer.