E3 week has come to a close, and just as it’s the biggest week in gaming for consoles, it’s been a massive week for Arena of Valor! Hitting the Esports scene hard with the Valor Series competition over the last few months, it all came down to a gripping finale at the ESL Arena in one of the many halls making up the yearly gaming convention in Los Angeles. Your NA and EU AoV World Cup representatives have been crowned, but the week saw plenty of Arena of Valor news hit the usual channels.

Valor Series Finale Live From The ESL Arena at E3

Without a doubt, the Valor Series Final was the highlight of the week. Months of competition culminated in two exciting days of professional level play in a bid to crown the teams that would go on represent both Europe and North America at the Arena of Valor World Cup next month. Immortals went on to push through the competition after a stellar showing in the weeks leading up to the event, with ESL legends For the Dream fighting to earn their place in the World Cup.

But the likely winners weren’t the highlight of the show. That spotlight goes to FLIPSID3 Tactics. Originally known as Team One Trick, they’re the bunch who just missed out on the E3 trip during the qualifiers, only to be awarded a place when Team Upsla dropped out due to schedule conflicts. Automatically becoming the underdog, Team One Trick then saw their luck climb higher as professional Esports organisation, FLIPSID3 Tactics, offered to take them under their wing.

Although they didn’t go on to win the whole thing, I think most can agree that it wasn’t expected. A few weeks of training wouldn’t have been enough to go from a dodging elimination through a technically to besting the strongest team in the house. But they certainly came close. Depsite the opposition, FLIPSID3 managed to make it to the quarter final, only losing out to Immortals – the team that went on to win the whole thing. GG, FLIPSID3. You’re going places. All the Valor Series E3 VODs are available here. 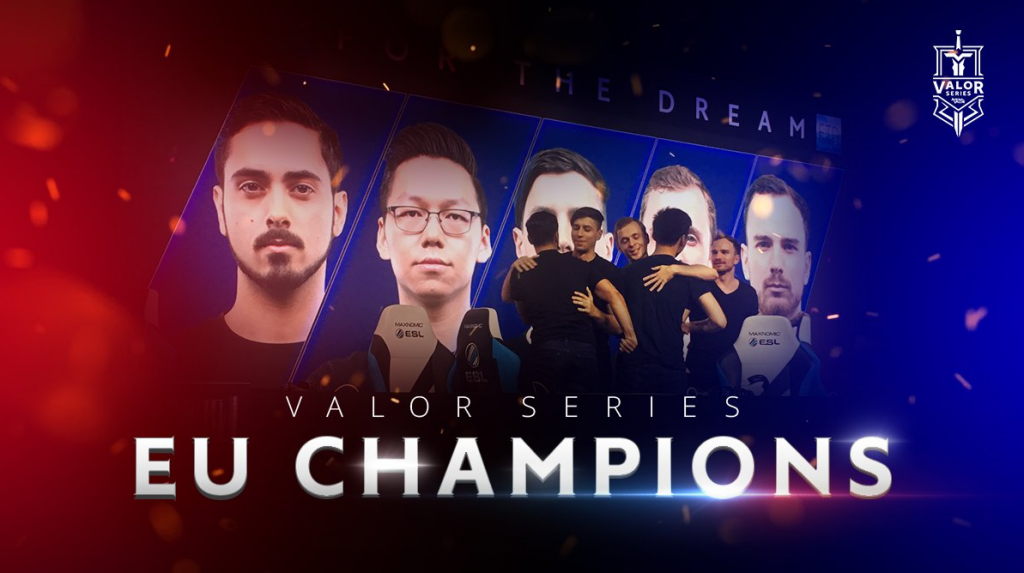 Arena of Valor For Nintendo Switch Set To Launch This Fall

The title says it all with this one, honestly, but it’s still worth a quick mention. Announced during a highlight reel in Nintendo’s rather disappointing E3 Direct, Arena of Valor’s Nintendo Switch version is now scheduled to launch in Fall. While we’re expecting the second beta event to kick off in the next few weeks, the full game won’t be arriving in time for Summer vacation.

To whet your appetite a little more, here’s some Nintendo Switch gameplay featuring one of AoV’s many mascots – Krixi. The footage came from the February beta, so we’re hoping many of the UI elements have been improved since, but you can still pinpoint some of the major graphical changes that but the Switch version ahead of its mobile counterpart; like the sunshafts at the respawn, the lush blades of grass making up the brush, and the little fireflies dancing around the trees of the jungle.

Beta sign-ups are still open, so make sure to fill out the form for your chance to give it a whirl before release. 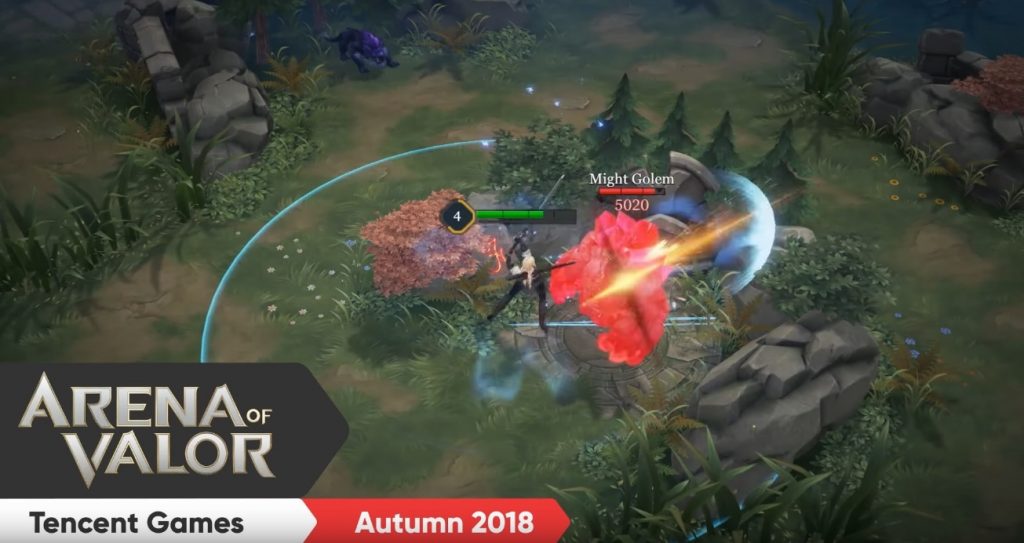 All that stressful competition had to mean something for the rest of us. Teased through the usual homepage animation, Arum ‘The Conjurer’ joined the AoV roster today.

A unique ‘lifesteal’ tank, Arum harnesses the power of her spirit animals to sap the life from her enemies. The conjurered spirits can join forces to become a large lion that charges forward for additional effects depending on how many spirits make up its core. Her tanking strategy seems to revolve around her ability to steal life from the team, placing her in a position to really take a beating in the battle.

Her ultimate locks her and a target enemy hero into a type of statis where neither can move or attack. Damage inflicted on one is replicated on the other, meaning the enemy team will struggle to graze Arum without killing their trapped ally. It seems like the perfect opportunity to snare the opposing AOE while stood right in a powerful AOE move.

Valhein Rings In The FIFA World Cup With A New Skin

We’re not sure how much people care about the FIFA World Cup this year, but Valhein is ready to support the game as a whole. Shown off through a big skin leak video a few weeks back, we should have known Goal Machine Valhein would arrive in time for the biggest event on the soccer calender.

From now until Monday 18th, you can grab the Goal Machine Valhein skin for a mere 100 vouchers – around 400 less than the cheapest skins on the store. It isn’t the flashiest skin available for popular pick, but Valhein’s status as the game’s introductory character means the large-scale appeal of the skin tied with its tiny price tag could see Valhein act as a gateway drug to the whole game for those soccer fans who may have heard of Arena of Valor through this week’s E3 final. 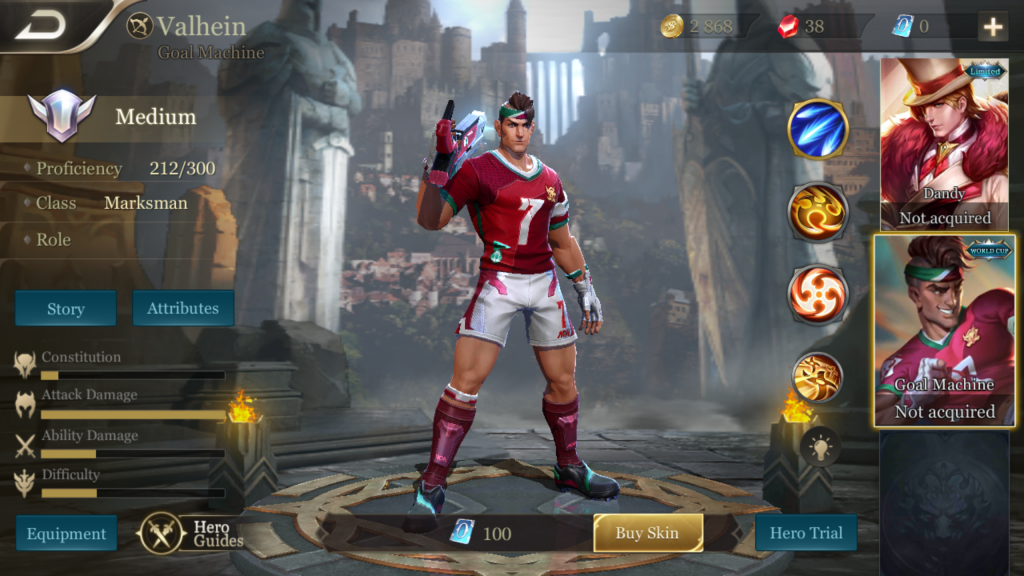 Further cementing the idea that Arena of Valor is growing outside of Asia, Nightless, a well-known Esports organisation, recently announced plans to jump into the AoV competitive scene with their own team.

With the Valor Series now officially over, leaving only the AoV World Cup to go, there isn’t much competition for Nightless to jump into right now. That’s why their announcement tweet specified that they’ll be competing in whatever comes after the AoV World Cup event next month. The ESL Go4 Cup may have closed its doors, but the increasing popularity of the game should see no shortage of worthwhile competition in the months and years to come.

Now we just have to wonder how the potential platform divide of the game’s Nintendo Switch version may complicate things. Clear that up, Tencent. We really need to know these things! 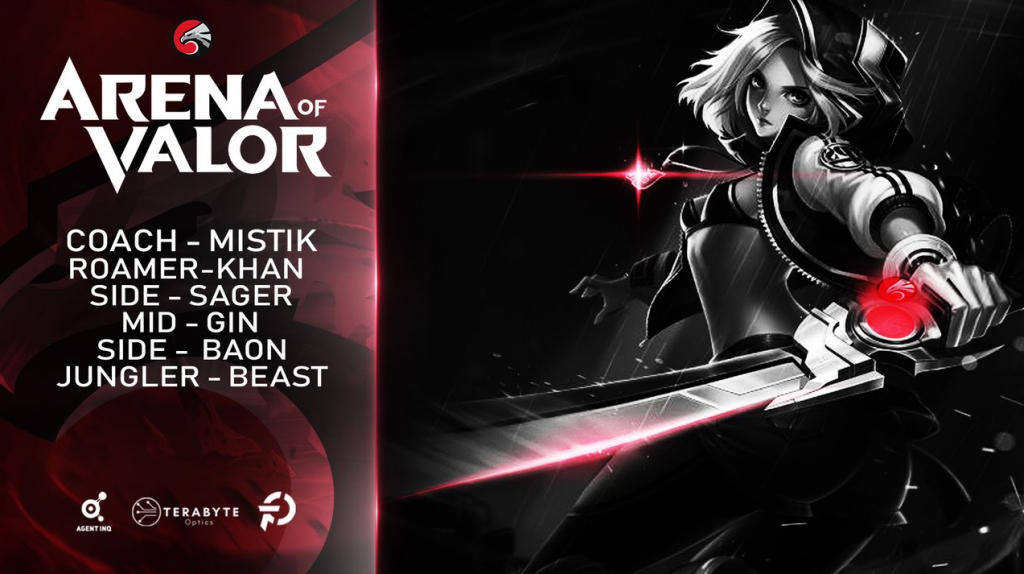 Judging by the YouTube viewer counts, not many of you tuned in to the Arena of Valor Caster School. And that’s a shame! Take a quick look at it and you’ll likely be impressed by the production values. Everyone’s skin is amazingly smooth (yes I fixated on that), and the whole thing is shot in 60fps. At only 15 minutes per episode, it’s an easy watch on a lunch break or when you just need a bit of down time.

With three episodes already live, the final should go up sometime today (so keep checking here). If you tuned into the Valor Series E3 final this week, you’ll likely already know who comes out on top, as the prize for making it to the end of the show was a spot on the caster team for the event and beyond.

We’re not going to spoil anything here, but for those who might already know the winner, the Caster School series can act as a bit of an origin story for someone who may have become your favorite caster during the E3 event.