Codename Entertainment brings Dungeons and Dragons to their hit idle game Crusaders of the Lost Idols (Free) with the new iPad game, Idle Champions of the Lost Realm (Free), and it’s a doozy. Take the structure of your average idle clicker, add in a dose of RPG elements with strategy as to how characters interact and enhance one another, and create different missions with a complex metagame that can give you hundreds of hours of gameplay. That’s Idle Champions in a nutshell, and it’s quite the experience if you’re willing to dive into it. Of course, you could say a lot of the same things about Crusaders, so while this is lacking in the originality department, it’s still a rather fun experience for somebody looking for the galaxy brain of idle clickers. 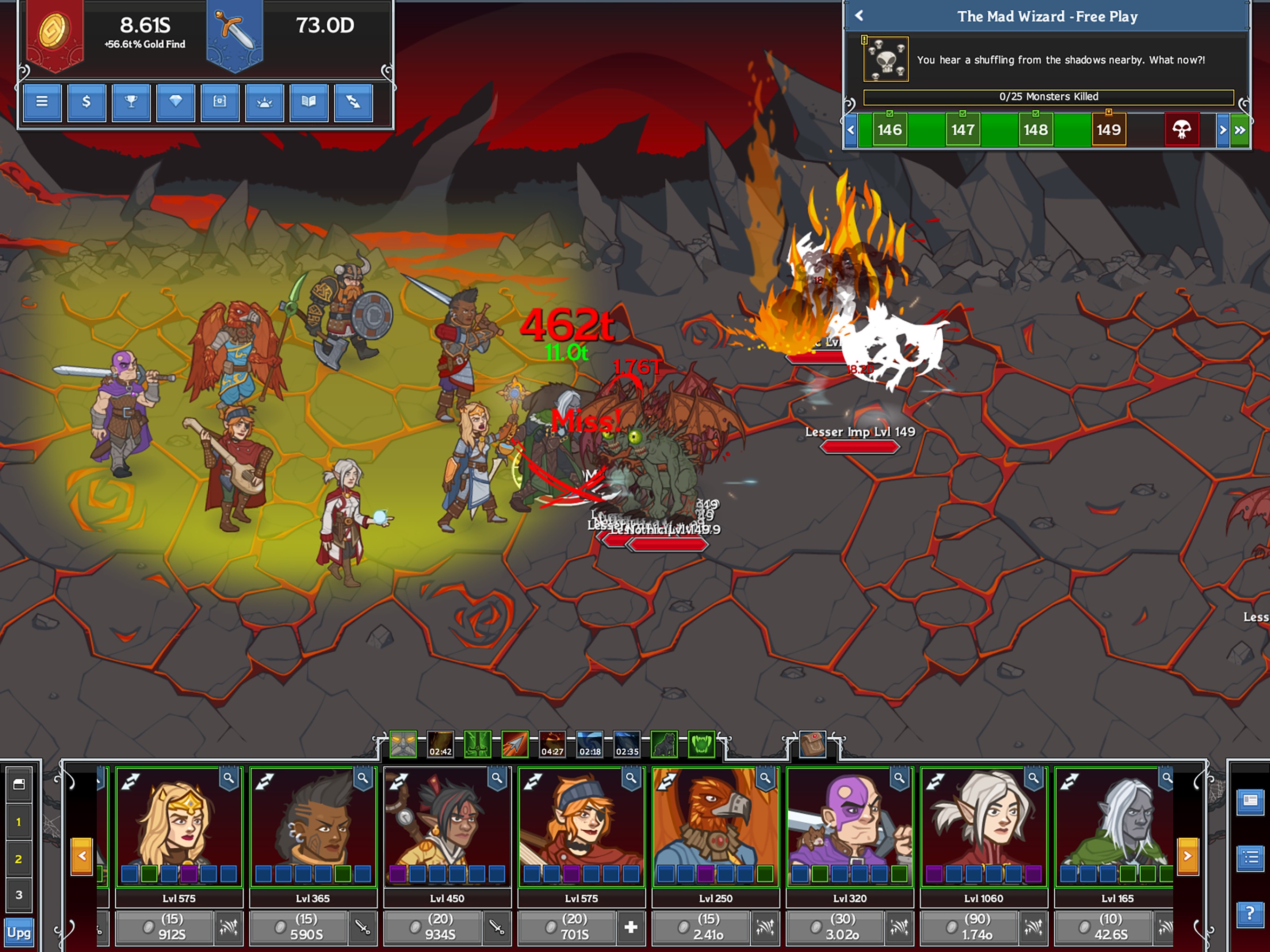 If you haven’t played Crusaders of the Lost Idols, get prepared for the deepest clicker ever. You command an army of heroes that constantly march forward and attack automatically killing enemies and getting gold. You then spend that gold on their upgrades, and while there’s the general pattern of “more expensive heroes do more damage," you can’t ignore any of your heroes either. See, you control the formation of the heroes, and different upgrades will cause the heroes to help other heroes out through stat upgrades. For example, a weak hero might be able to pick up several stat multipliers that could quadruple your most powerful hero’s damage, despite them only adding a rounding error to your total damage per second. So, you don’t want to just go with the most powerful heroes in your formation, you have to consider all the interactions between heroes, and their physical location in the formation matters a great deal as well.

Then there is the quest structure to consider. Each quest starts you off with a fresh reset of all your heroes, and gives you an objective with a certain number of levels. While each level has the same basic goal, and there are boss fights every five levels, different quests have different formations and requirements that will cause you to change your upgrade strategy each time. Completing quests also nets you permanent upgrades. For example, early on you can collect Torm’s Favor to upgrade your total gold fine, or you can spend this currency on permanent upgrades, at the cost of some extra gold. Of course, getting gold gives you more upgrades to your champions, and makes it easier to complete quests, but increasing damage or reducing cooldown can have a huge impact as well. 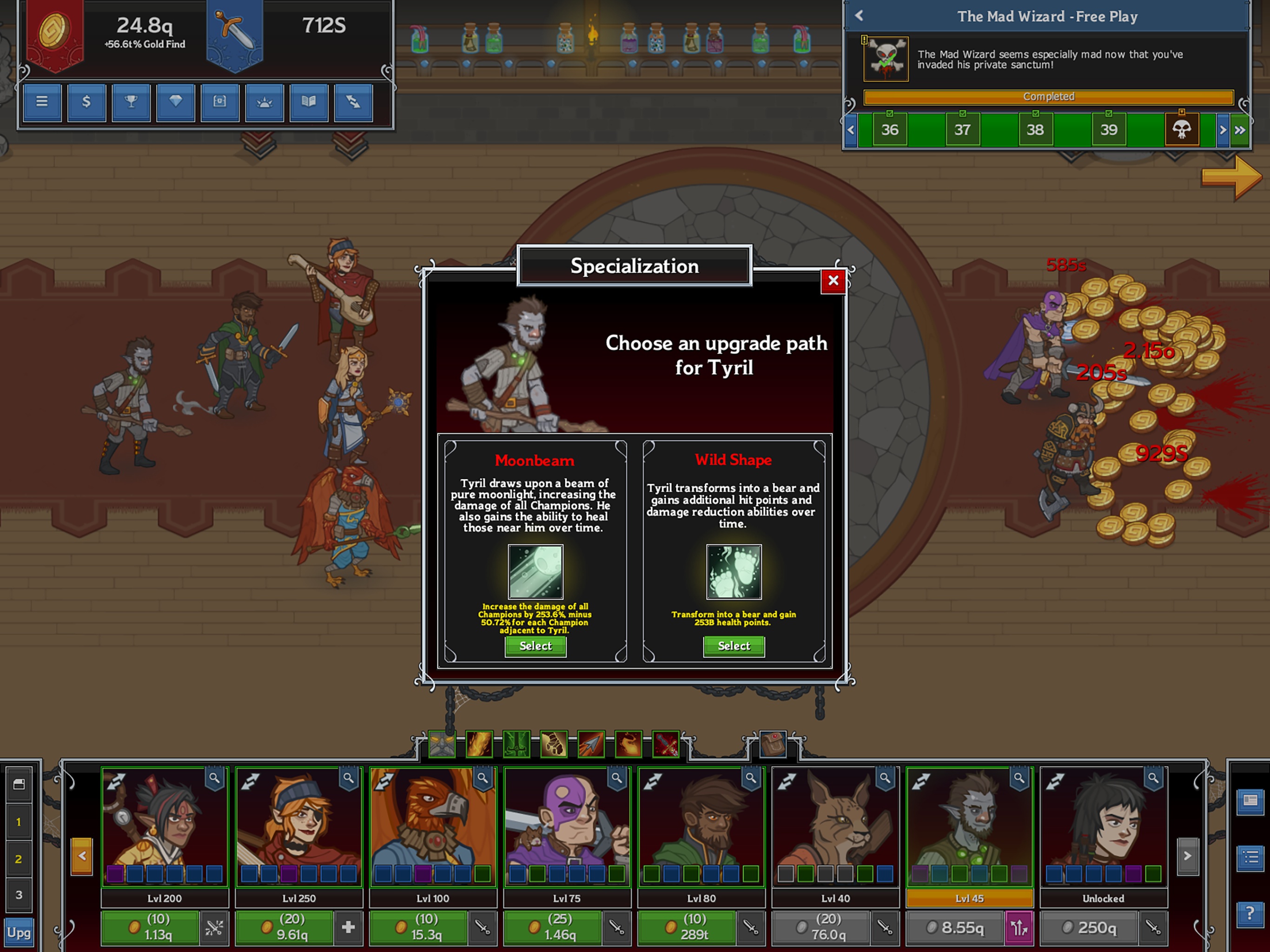 Idle Champions always gives you something to think about, and rewards you experimenting with different hero formations and upgrade paths. And there is always something to do, with hundreds of hours of potential gameplay to be had here. Granted, not all of it is active play as it is an idle clicker, but it demands more of an active role for peak performance than you might expect from a clicker. Though, clicking doesn’t really do much here: you can upgrade your click damage, but it is by far a less effective upgrade compared to increasing your total DPS from your heroes. At least the game doesn’t make you use a hero slot for a guy who just clicks. Also, you can now click to target an individual enemy.

If you played Crusaders of the Lost Idols, you have a general idea of what to expect here. The big difference to know about is the way that the DPS system works. Instead of your army steadily attacking enemies, now your heroes do single attacks over time, with different heroes attacking more often than others. Functionally, it’s not much different. Now, upgrades don’t cost gold, but come as part of your level upgrades. The game also can auto-advance to the next level once the objective is complete. The monetization also hasn’t changed much: there are still chests and item packs to buy, though all purchases net a higher-quality golden chest, though these can be bought with in-game currency as well. And really, all anything ever does is just speed up your progress. It’s just a nice, refined version of the formula that already exists, with loads of new content to play through, all set in the Dungeons and Dragons universe. 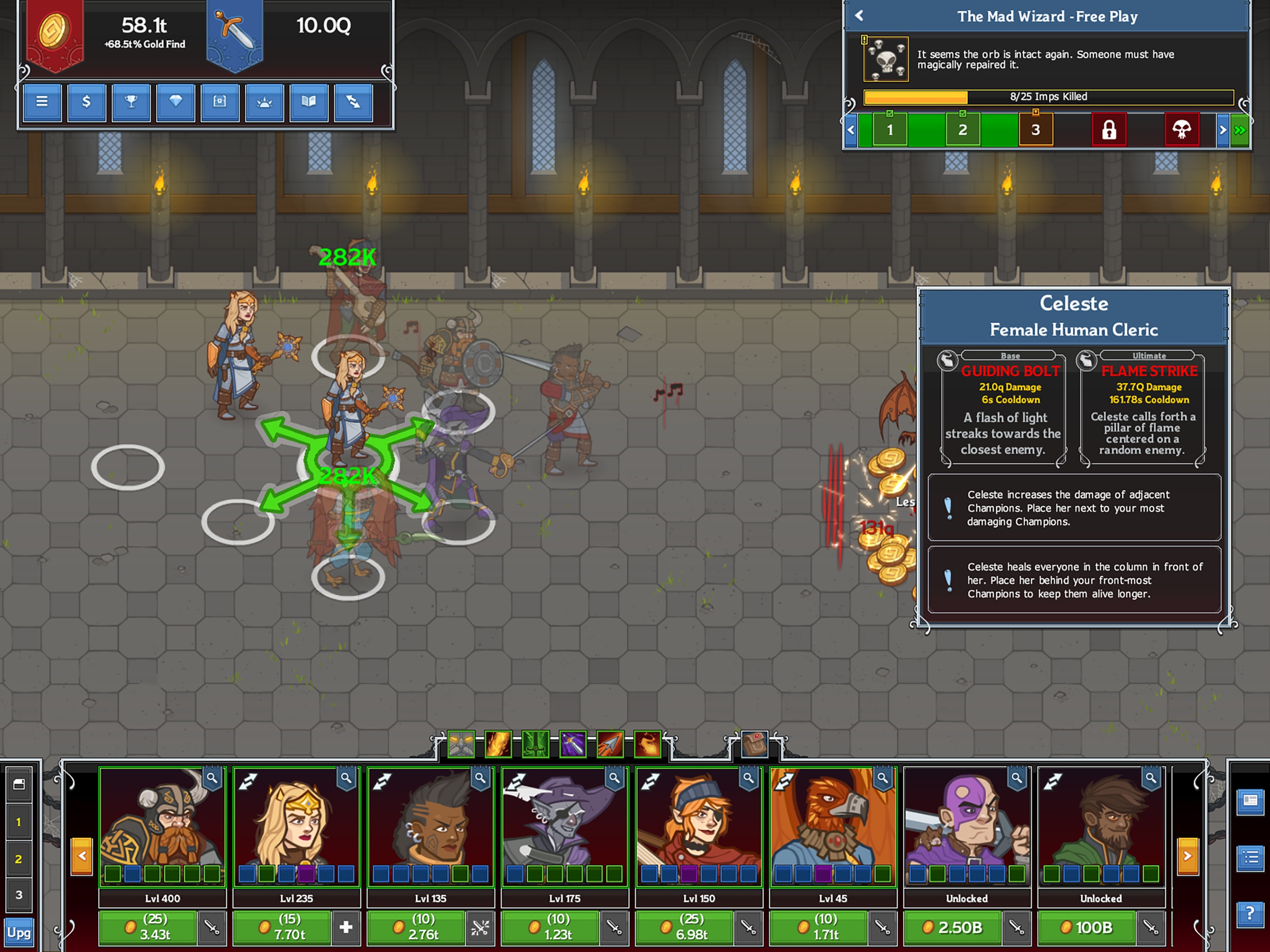 And adding in the D&D world to the game adds a lot to the experience. It’s clearly helped the aesthetics of the game, as while it’s all still rather cartoony, everything feels more consistent. There was a wild bunch of fantasy archetypes in Crusaders that felt wildly disjointed, and I didn’t care for the art. Here, the adaptation of real D&D characters (complete with their races and stats) makes for a world that feels like it’s having fun with Dungeons and Dragons while feeling like a unified experience. Also, there’s plenty of easter eggs here for people well-versed in D&D lore, and familiar names pop up throughout the game.

Technologically, Idle Champions does take a few steps back. One feature I miss is the lack of cross-platform synchronization between the desktop and mobile versions of the game. One of my favorite things to do with Crusaders was to leave the PC version running while I was working, and would play the game that way. Instead, you’re locked to one device here, and there’s no way to back your account up to Facebook, or something similar. I’d be worried about losing my account and progress, for sure. Also, you lose the ability to play on phones, but the interface was a bit cramped on the iPhone 6 Plus on Crusaders, so I certainly understand abandoning the phone version. Also, Idle Champions runs a lot smoother than Crusaders, so if they made these decisions to make for a better experience on each platform, well, I can’t blame them for making this call. 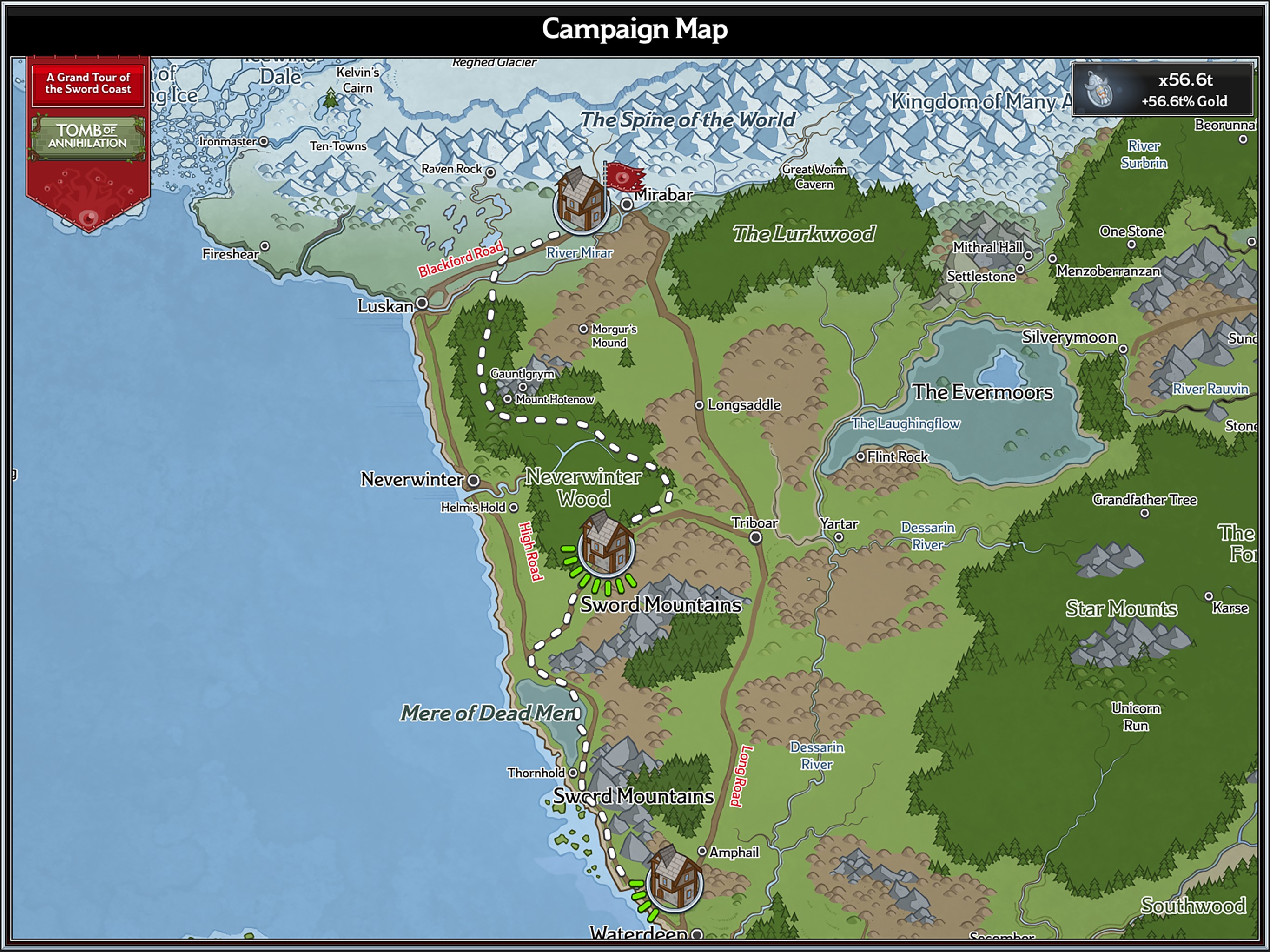 Also, while the DPS system is different in Idle Champions, the whole experience really isn’t that much different from Crusaders, and while it’s possible that this game will see more content going forward, you might prefer of Crusaders of the Lost Idols. Or you could play that, and there is so much to do in that game, that you would be unlikely to complete it before you would need a sequel. But if you stopped playing Crusaders and want something fresh, here you go.

But I hope that if you haven’t played Crusaders of the Lost Idols, that you do check out Idle Champions of the Forgotten Realms. It’s a more refined experience than Crusaders was, and you can definitely enjoy the game for free if you’re willing to step back and wait to get more gold to upgrade your heroes and progress further, or if you want to buy a chest with items and currency if you’re impatient. This is a game that gives a lot back to the player without taking too much in return, and if you enjoy idle games, you ought to give Idle Champions a shot.