If you are in a lighthearted mood and want a game you can sit down to and enjoy while laughing out loud, then Animal Super Squad ($4.99) is your game. You will probably be shaking in your seat from laughter every 10 seconds you play. The game is simply hilarious, but enjoyable at the same time. Animal Super Squad actually made its way from Nintendo Switch, PlayStation 4, and PC onto iOS and Android recently and it shows in the presentation. The game has very nice visuals and physics that are simply outstanding to take in. There literally seems like an endless amount of variation to falls, spins and jumps in the game as it feels like it was made to be a Nvidia PhysX technology showpiece. You can be flung in the air while doing flips only to become a hamburger in the end as you fall. This may occur after your chosen animal takes too much of a beating and the vehicle either crashed or you abandoned it. Yea, hilarity is part of the game’s appeal. 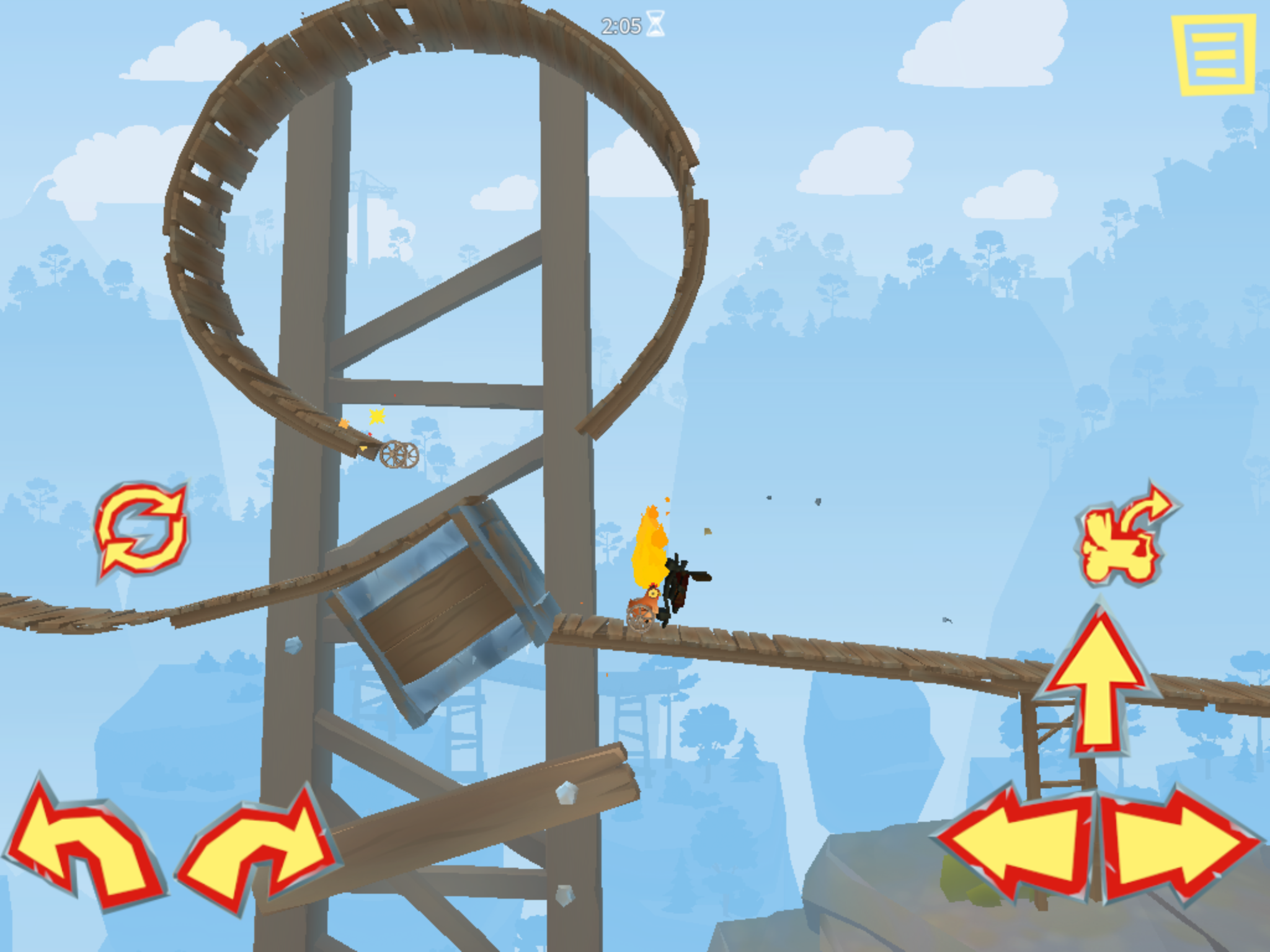 You start out controlling a chicken inside vehicles, but gain additional animals you can pick as you advance in rank. You also have various vehicles to pick from that over time get crushed and deteriorated. This is because you have to overcome various obstacles as you try to beat the in-game and player-created levels the game comes packed with. The obstacles that get in your way across levels can range from high falls, rocket jumps, mines, and barrels you have to jump across.

You can actually move from left to right and backwards if needed besides having both forward and backward boosts for added maneuverability. You also have two buttons that change your chosen animal’s trajectory or slope (upward or downward) so you can boost into jumps off ledges. There are a lot of variations to the control and it can be a bit intimidating at first. You can tell the controls were really made with a controller in mind, but with practice they can become second nature on a touchscreen. 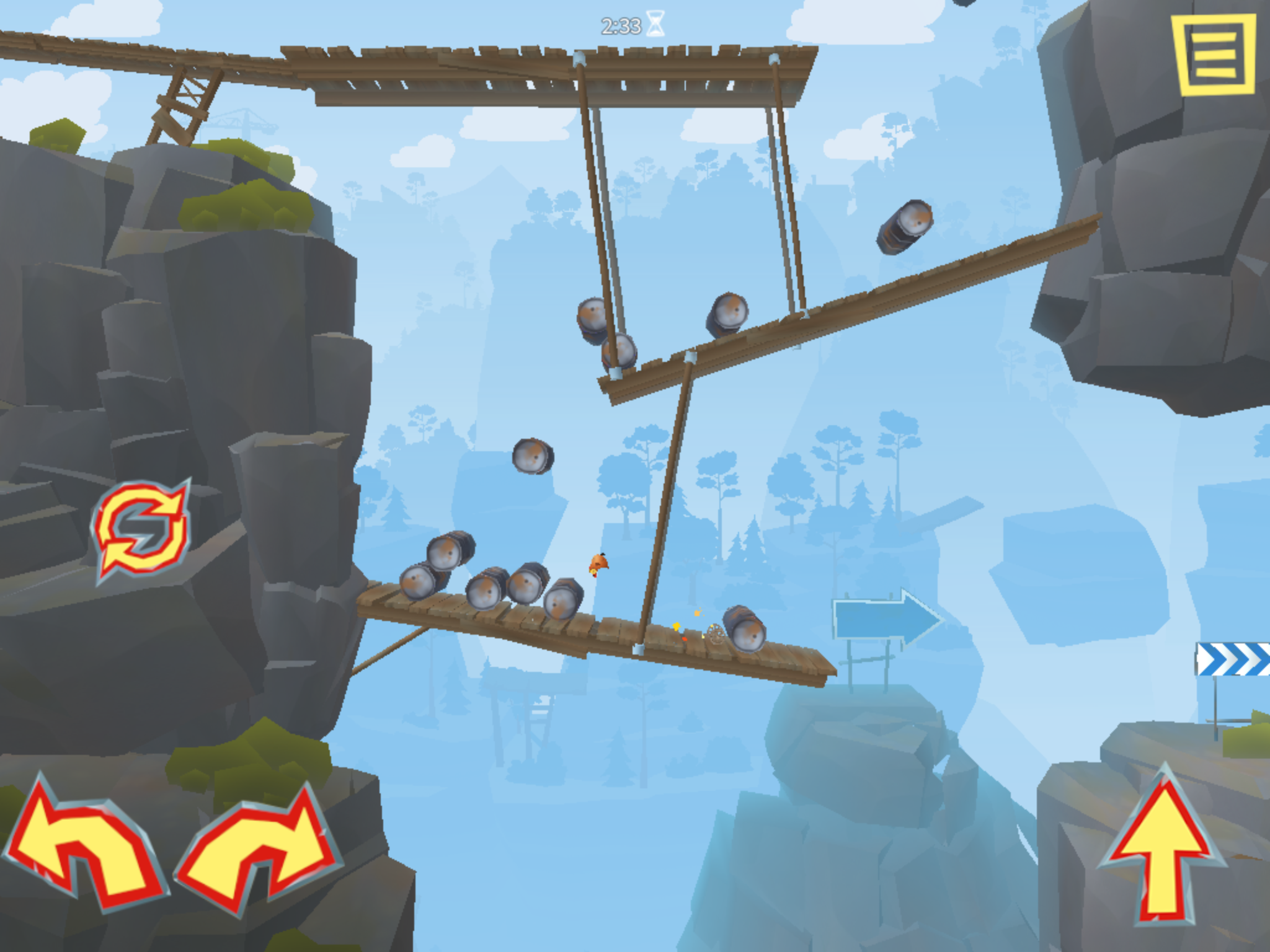 Your vehicle will become damaged over and over again to the point it may be unrecognizable by the time you reach the end or even a checkpoint. In fact, you may have to control the animal directly until you find a new vehicle or restart from the last check point. A funny situation happened to me where only the back wheels remained while my chicken kept sloping forward. To add more hilarity to the mix, you can actually fling your chosen animal in mid-air out of the vehicle and see the physics take over. Seeing the chicken, or whatever animal you are controlling, jump about in mid-air while being ricocheted never gets old.

It was very difficult for me to classify this game. It plays pretty much like a platformer, but a very forgiving one in the amount of damage you can take before dying. As I mentioned previously, your vehicle will take damage and degenerate the longer you play. However, it will still function and when you die, you get to restart at the last check point with your vehicle fully intact again. You may be missing the front wheels, yet you will still be playing and trying to hit that next check point. This is where the game’s challenge lies: using physics to your advantage across obstacles while your vehicle or chicken may be totally compromised. 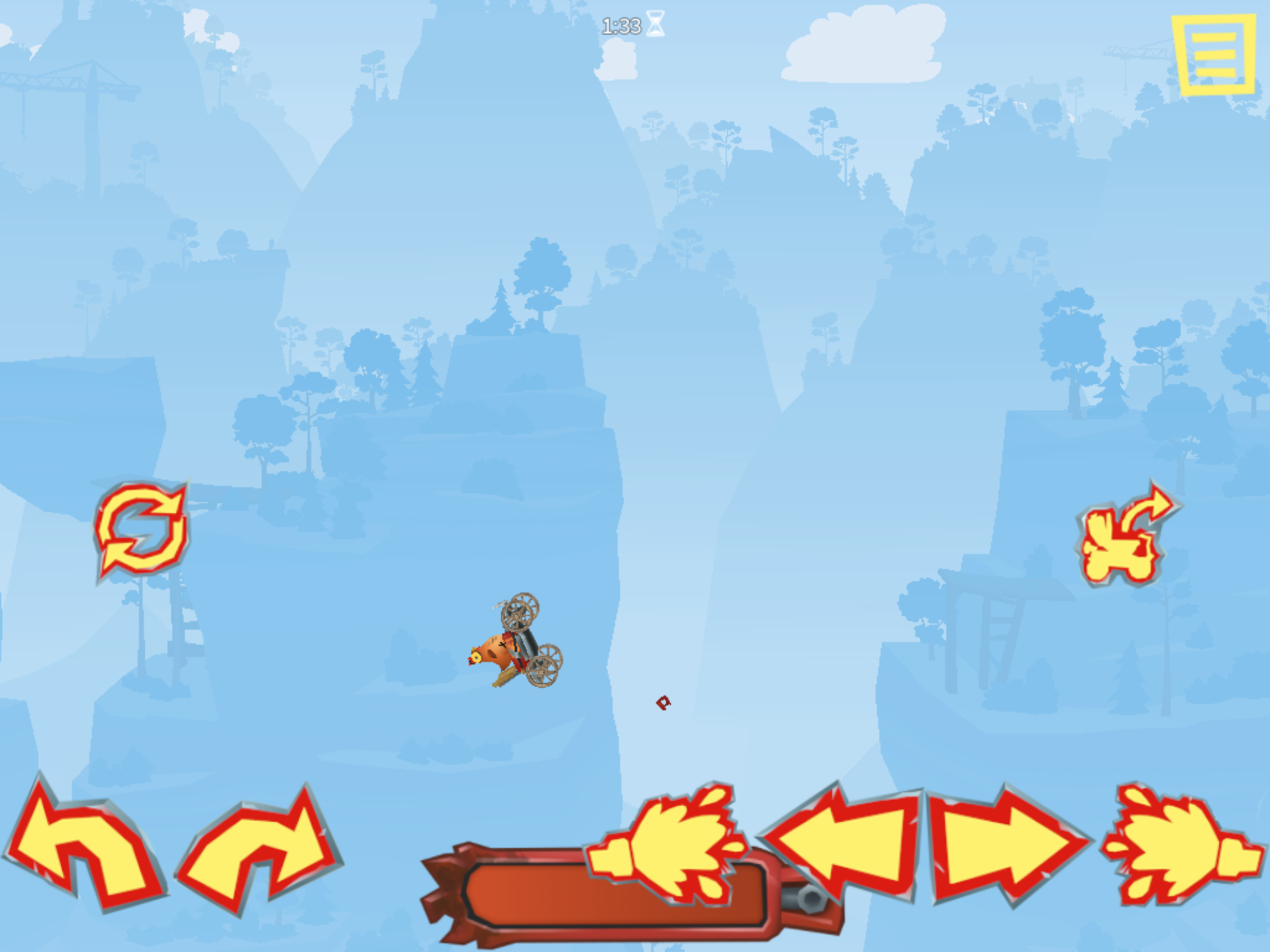 The levels, including the player-created ones, are quite large and lengthy. However, there always seems to be a decent ammount of check points to hit. The game also has a big emphasis on user-created content and it shows. Right from the main menu, you will be able to select preloaded user levels (by clicking on ‘community’) without any downloading going on from what I’ve seen. Just select your level, click play and choose from a wide range of vehicles, then hit on the play icon again. That’s it. The levels you can select also come with a rating in place marked by stars.

Speaking of vehicles, there are a wide range to pick from in the community section, but you have to earn them doing the main levels of play. Many are not even traditional or ground-based vehicles (with wheels) at all. For instance, there is a propeller that will have your chicken fly across the level the whole time. It may sound like cheating, but it actually is no easy task controlling that propeller as you still have to angle it right and slow down at the right times to avoid or overcome obstacles.

Sadly, the level editor is not currently part of the mobile version of the game, which is reflected in the lower price for the mobile version compared to other platforms. Still, even if you cannot create levels yet, Animal Super Squad has a lot of replay value going for it. Not only in the fact it comes with community-created levels you can pick from, but in the vehicle variations to play them on. There is also the fact that the game is worth playing just for a laugh or to see what the physics can do under various circumstances. Let’s just hope the developers keep up on their app description promise and keep adding more of the community features and levels for this mobile version through updates.