If you’re a fan of paid mobile games, and you don’t buy Oddmar ($4.99), you are the problem. If the developer Senri had any sense whatsoever, they would have released this on other platforms like the Switch first, and then released it on mobile maybe someday in the distant future. This is one of the best-looking mobile games of all time. And it’s an incredibly fun action-platformer that anyone who cares about mobile gaming, or just wants a fun game to play, has to pick this up. It’s not an option. This game is a mandatory purchase for all mobile gaming enthusiasts.

You control the eponymous viking protagonist, a selfish little oaf who is pressed into duty when his entire village disappears. He’s granted a mystical power by forest creatures that allows him to jump around by throwing down mushrooms, but in exchange, he has to also save the great forest from evil creatures. All these objectives lead into eventual goal: stop every evil in your way, and become worthy to enter Valhalla.

Somehow, Senri managed to make their previous game Leo’s Fortune ($4.99) look like a tech demo in comparison to Oddmar. The caliber of animation and detail present here is just astounding. The entire world feels lively, but without feeling too busy. Oddmar, the protagonist, has so many fluid animations that go along with his different moves. Nothing in this game feels like it was a half-measure, everything feels alive. It’s perhaps the most impressive 2D platformer ever put on mobile, and it’s on par with those gorgeous 2010s Rayman games with the quality of their animation. Seriously, this is just unfair to other game developers. And I’m not even mentioning the fully animated and voiced cutscenes, too. The developers spared no expense in making Oddmar look perfect. 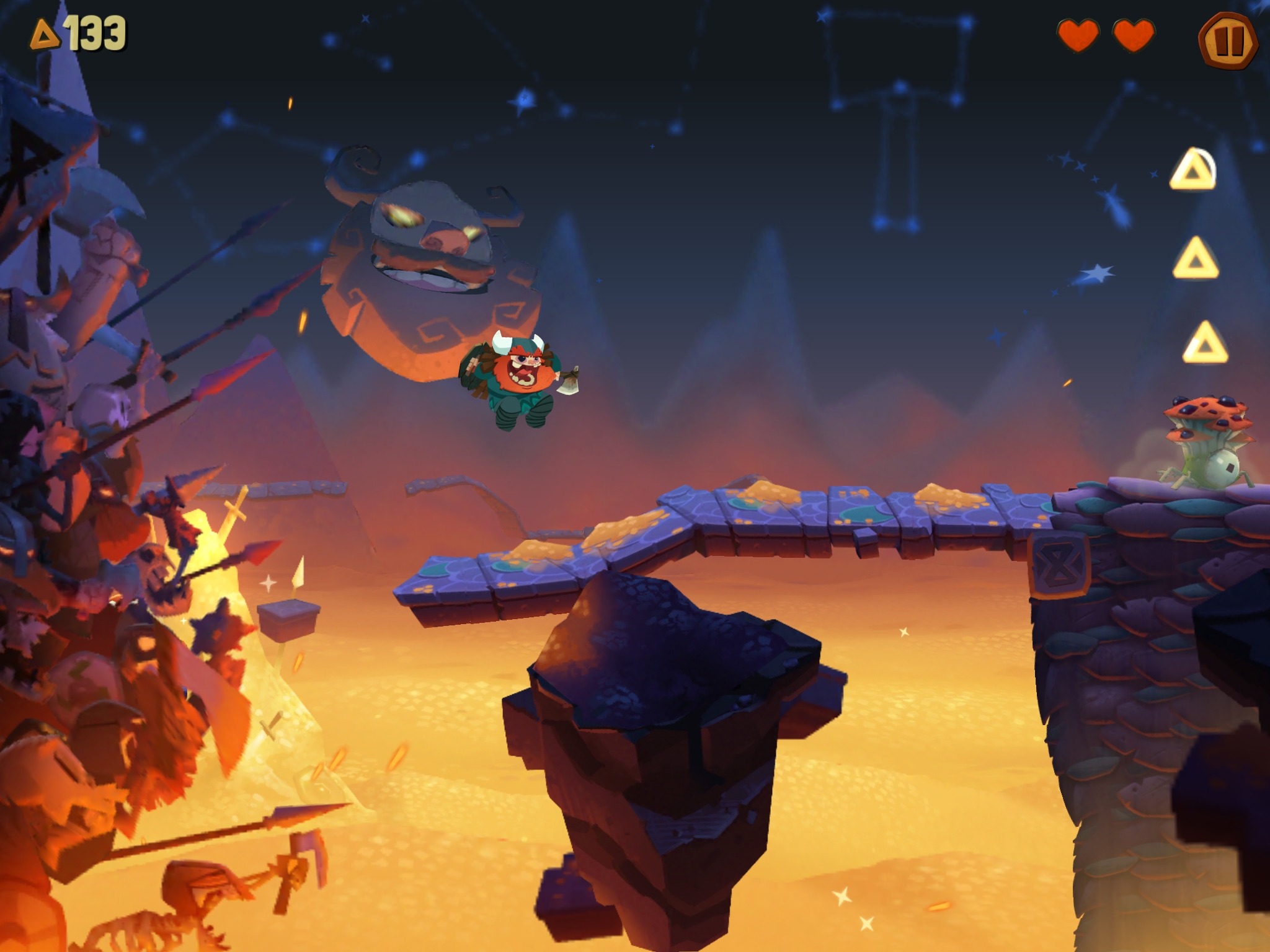 The animation isn’t just a gimmick, here to prop up the game. Oddmar actually feels a bit better to play with touch controls, with the way that Oddmar feels like he moves with the player’s finger. There’s something that feels like a minor disconnect when moving Oddmar with a joystick or d-pad with the game’s MFi controls. Swiping upward to lay down a mushroom to jump, especially off of walls, just feels good too. There’s nothing patently bad about the controls on controllers, but I prefer playing this with touch controls! That’s more of a testament to how much good work Senri and Mobge put to making this feel like a good game on mobile.

Oddmar isn’t all about its looks. It throws some fun platforming designs at the player. There are fun wall-jumping challenges throughout the game. One enemy serves both as a twisty ladder, but also as something to defeat, but it kills the body, so you have to be careful when you kill the head. One bonus level is especially fun, as it trolls the player throughout, but not just in ways meant to kill the player. Bopping off of enemies to collect more coins feels fun, and the game’s coin-collection challenge perfectly strikes the balance between convincing the player to collect as many coins as possible without making a single missed coin feel like the end of the world. And if you like speedrunning, several levels have challenges to complete them as quickly as possible. The bosses are fun, as not all of them involve just bashing an enemy, but instead tackling platformer challenges along with finding a way to hit them. 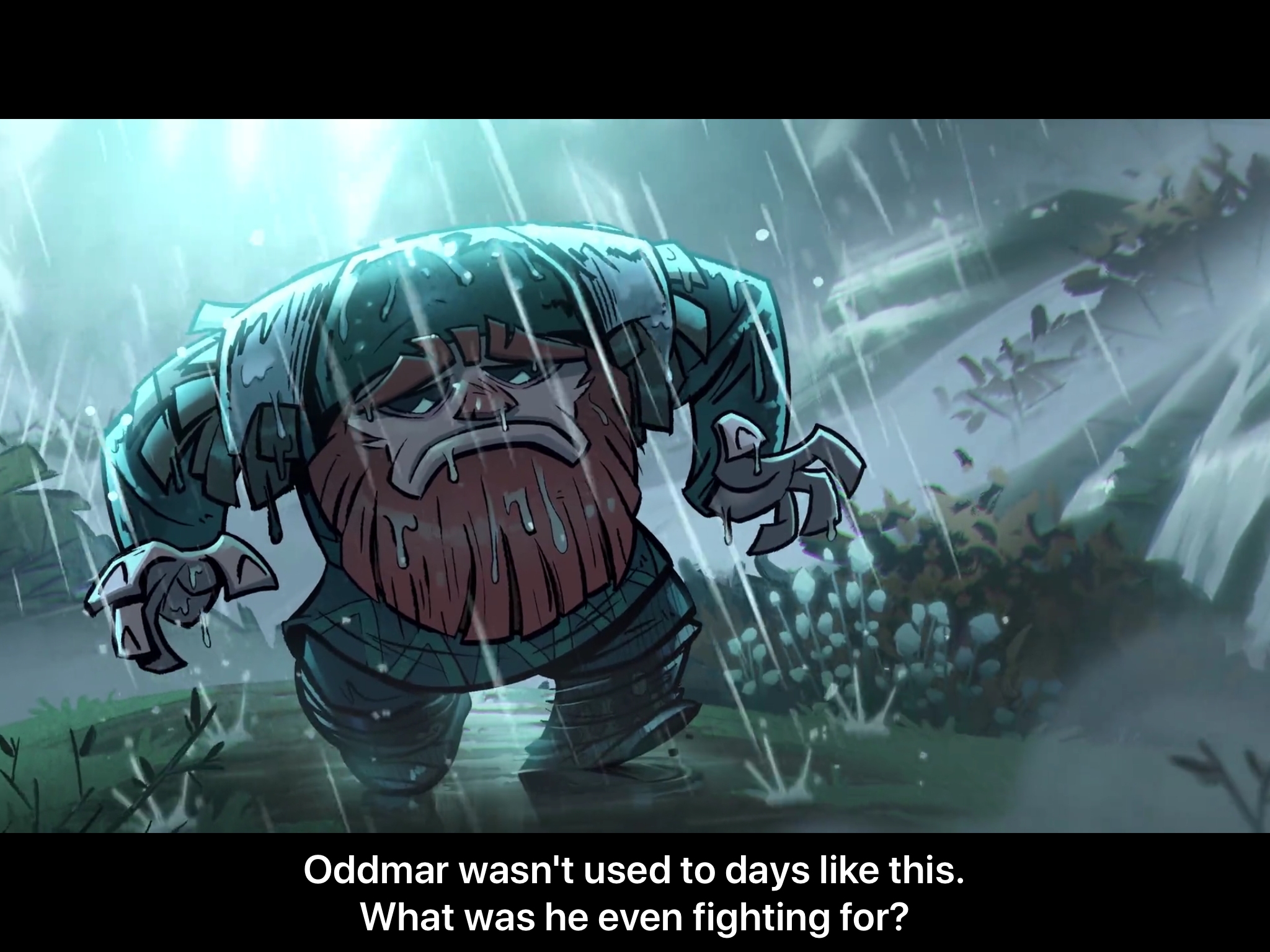 Oddmar isn’t an extremely long game, with 24 levels to play through and the three challenges in each level to complete. You can likely beat this one in just a few hours, but you’ll have a ton of fun along the way. There isn’t a wasted minute here. There are new weapons and shields to buy along the way, which provide optional effects that can help you fend off enemies. $4.99 for this game is absolutely a steal, when you consider that these are exceptional production values. This is is one of the best-looking mobile games ever made, and it’s sure to stand the test of time…unless Senri does to Oddmar what they did to Leo’s Fortune. People will pay three times the price for this on the Switch, Steam, and other systems, and it’s well worth it.

Mobile gamers, we don’t get games like this that debut on mobile. Granted, the idea of ‘platforms’ is kind of dying off as games get multiplatform releases more often than not, but mobile feels kind of like the odd duck out lately. Why release a paid game first on mobile when an audience will pay more for it on other platforms…and then releasing on mobile later means that people would likely pay more? Oddmar releasing on mobile first is certainly not the decision I would have advised Senri and Mobge to make from a pragmatic sense. I would’ve begged them to release on Switch first, get on mobile later.

So mobile gamers, you need to reward Mobge and Senri for their crazy decision to release Oddmar on mobile. This game is so good, and so well-made, that it deserves your purchase regardless of the state of the market that it’s in. But I see so many people complain about the state of mobile gaming. This is the game that you want, it’s a fun platformer without in-app purchases that is absolutely stunning, and feels like it was made for mobile. With the rise of free-to-play across gaming, and the struggle to sell paid games on mobile, there might not ever be a game like this that releases on mobile first, or they’re at least going to get rarer and rarer. Buy this game right now. It’s worth it, and maybe if Oddmar is a hit, it’ll show that developers can put a ton of work and resources into more of these games and have it pay off.