Oddmar ($4.99) is one of those games that’s almost too difficult to write about, mostly because I just have SO MUCH I want to say about it I’m not sure where to begin. The product of studios MobGe & Senri, who have such amazing titles under their belt as Leo’s Fortune, Devil’s Attorney, and the Dark Nebula series, Oddmar is a platforming game that’s almost more about the experience of the story and the wonderful characters and world that have been created than it is about testing your platforming prowess. Don’t get me wrong, it’s filled with satisfying gameplay left and right, but you really don’t get games with this level of charm and this high of production values on mobile, and it’s a sight to behold. 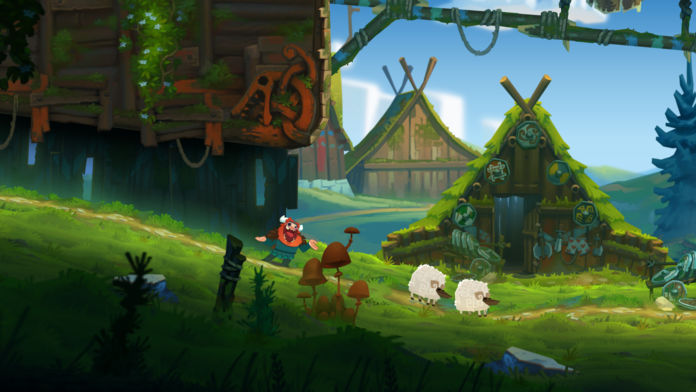 Oddmar is a Viking who isn’t like the other Vikings in his village. He’s not big into plundering and pillaging, but he’ll happily snooze away while taking a nap in the sunshine. He’s a kind spirit, but his fellow Vikings feel like he’s not pulling his fair amount of weight in the “doing Viking stuff" deparment, and so the chief of the village demands that Oddmar go out and raze the neighboring forest to the ground so that their village can expand. Oddmar is conflicted as he wants to make his Viking brethren proud, but not at the expense of senseless destruction. Suddenly his whole village and everyone in it disappears into thin air, and a forest fairy that visited Oddmar in his dreams bestows a special ability to the plucky Viking, and thus Oddmar’s quest begins as he sets out to save his village and finally win the respect he so desperately wants, all while figuring out what the heck is REALLY going on here.

The ability Oddmar obtains from the fairy is having mushrooms sprout up underneath his feet on command. Yeah, that’s a weird super power, but in gameplay terms this simply means Oddmar can jump REALLY well now and has become especially nimble. Which is good as he’ll need all of that to negotiate the brilliantly-designed levels and numerous enemies and hazards in the game. In addition to a normal jump Oddmar can also wall jump, attack, and perform a downward shield bash move while airborne. The default controls for all this are phenomenal. Drag anywhere on the left side of the screen to move, and on the right side you’ll swipe up to jump, tap to attack, and swipe down while in the air to shield bash. There’s an option for regular old virtual buttons too, but I urge you to go with the defaults as they feel so completely natural after warming up to them. 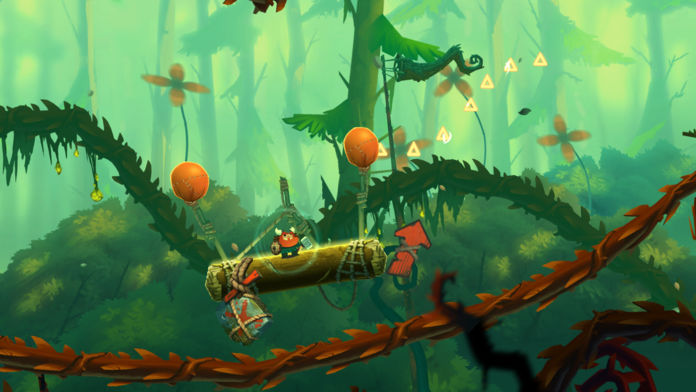 The main goal of Oddmar is to make your way through the game’s 24 levels, with absolutely stunning, fully voiced animated cutscenes in between each one that tell the tale of Oddmar. On top of just completing the game, each level also has additional goals like collecting a certain number of the triangle-shaped coins spread throughout, collecting three hidden tokens in each level, and completing a time trial or a special “dream sequence" area depending on which level you’re playing. I love games that give you reason to go back and play through its levels, and Oddmar does an outstanding job with this. I’d say it’s overall on the easier side of things difficulty-wise, but those extra goals definitely add some additional challenge to the package.

The real star of the show though is the production values and the magical world of Oddmar. I’ve seen it compared to the newer Rayman games and I think that’s spot-on. The animation of the characters is top-notch, the environments are colorful and detailed, and overall it feels like the entire game is a living, breathing thing. So many little details jump out from every corner that make it feel like this is a fully-realized little world you’re playing in. And with the great animation and artwork, it’s almost like you’re playing an interactive cartoon. The story and characters are actually compelling, and the voice work is surprisingly great. If this was an animated show or movie, I’d totally watch it.

The one downfall of Oddmar is that you just want more of it. It’s a relatively brief game, and I’d guess most people will get about 6-8 hours out of it but probably less if you’re an especially skilled platforming gamer. I’d be more than happy to see more levels added someday, or even a super difficult New Game+ mode or something just to give me reason to play through it all again. But honestly, this is a game I’ll play through over and over many times anyway just because it’s so darn fun and it feels criminal that you can buy a game of this quality, with no IAP or freemium shenanigans to boot, for five stinking dollars. Oddmar is an absolute classic and you owe it to yourself to experience one of the best ever platformers on a mobile device.