Halfbrick is quite the name in the mobile gaming scene with massive successes like Fruit Ninja (Free) and Jetpack Joyride (Free). In recent times, things haven’t been going amazing though. They recently laid off half their staff and announced that they would focus on their core IPs which are the games linked above. Today, something very interesting released on the App Store and Google Play in India only. Mech Mocha, an Indian games company, has developed an Indian version of Jetpack Joyride and this replaces the original release in India on all storefronts. Watch the trailer below:

Jetpack Joyride has been out on the App Store since 2011 and it has gone through a lot with content updates and feature updates since then. The Indian version that you can only download in India has various cameos from Indian comedians and features levels depicting various Indian locations. Mech Mocha has been working on this for a while and now that it has completely replaced the original Jetpack Joyride on the store, it will no doubt get downloaded quite a bit. I’m never a fan of localised releases replacing the original version in any form. This is obviously to drive download numbers but imagine if you had no choice to buy the original version of a particular movie and could only get one that was tuned to the regional taste.

Jetpack Joyride India Official (yes that is the name on the App Store) doesn’t have the same endless mode as the traditional game. It has 100 levels instead and the initial ones aren’t as fun as the onboarding of the original game at all. In fact there are some assets in the new release that seem to be too heavily inspired by the popular Danganronpa character Monokuma. This is an interesting move by Halfbrick but if it actually is successful after an initial spike of downloads remains to be seen. On Android, people can straight up sideload the original if they want but iOS users in India who don’t own it will need to make another region account to get the pure Jetpack Joyride experience. 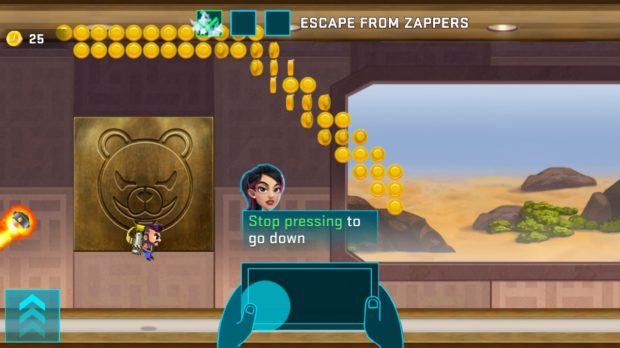 An interesting thing to note is the original Jetpack Joyride ended up on more than just mobile platforms. It exists on multiple PlayStation platforms and those versions are still available untouched on the PlayStation Network in India. It is just the iOS and Android versions that have been pulled and replaced with the new Indian localised release. It remains to be seen if they will bring the localised release up to speed in terms of content and gameplay to keep up with the now international release. Check out the official Indian localisation of Jetpack Joyride on the App Store and Google Play.