Although they’ve been branching out in some big ways in recent years, Tin Man Games is still best known for one thing: digital gamebooks. Whether wholly original works like their Gamebook Adventures series or adaptations of physical books like the Fighting Fantasy line, Tin Man’s gamebooks generally have featured excellent presentation while remaining quite faithful to the paperbacks that inspired them. They’ve released quite a few such titles on mobile, but it’s been a little while since the last one came out. Fighting Fantasy Classics (Free) is Tin Man’s return to digital versions of traditional gamebooks, and what a comeback it is. 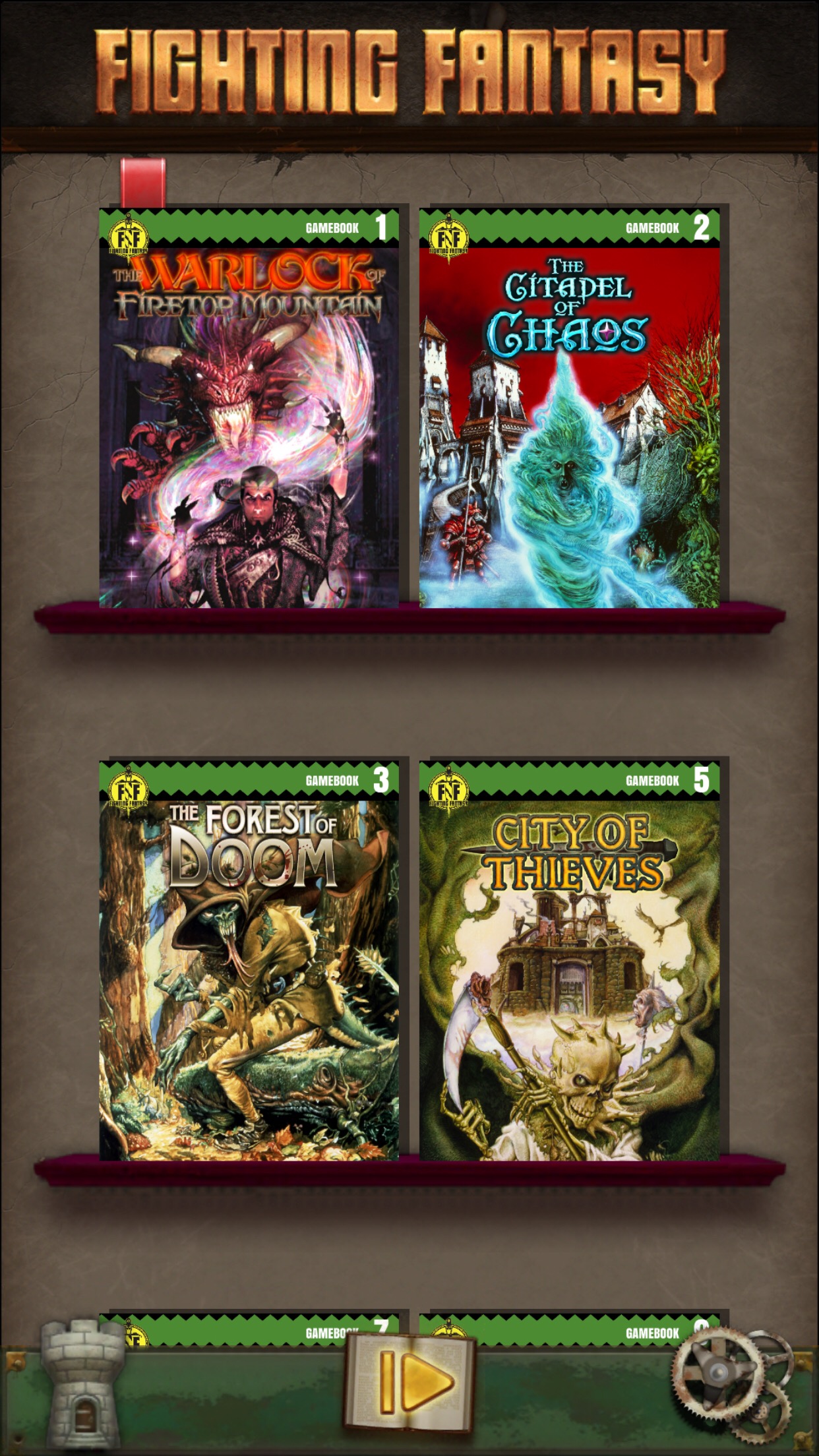 Fighting Fantasy Classics is a hub app where all of Tin Man’s future Fighting Fantasy gamebook conversions will be delivered. The initial free download allows you to play Bloodbones in its entirety at no cost. Additional books are available through IAPs, allowing you to add to your library as you see fit. The starting line-up is a nice mix of previously-released hits and some long-requested new conversions, and more books will be added as time goes on. The books all share the same engine and basic interface, though each of them is tailored somewhat to the needs and style of the original text. I’m not sure if this is a new engine or an enhanced version of the previous one, but in practice these work a lot like the older stand-alone releases. That’s a good thing.

Turning pages and making selections is easy and intuitive. For the bits that used to exist outside of the books, like your character sheet and the dice, digital replacements are provided. Multiple difficulty settings are available, allowing you to cheat your way through, play it straight, or take on a new higher challenge. The first two difficulty settings allow you to use bookmarks, which allow you to easily go back to certain critical junctures if you need to. Each book offers a number of options that allow you to speed up combat, change the size of the text, and so on. In order to keep the overall app’s file size down, the artwork for each game is an optional download. Some of the books allow you to choose between the classic monochrome art and snazzy colorized versions, as well. 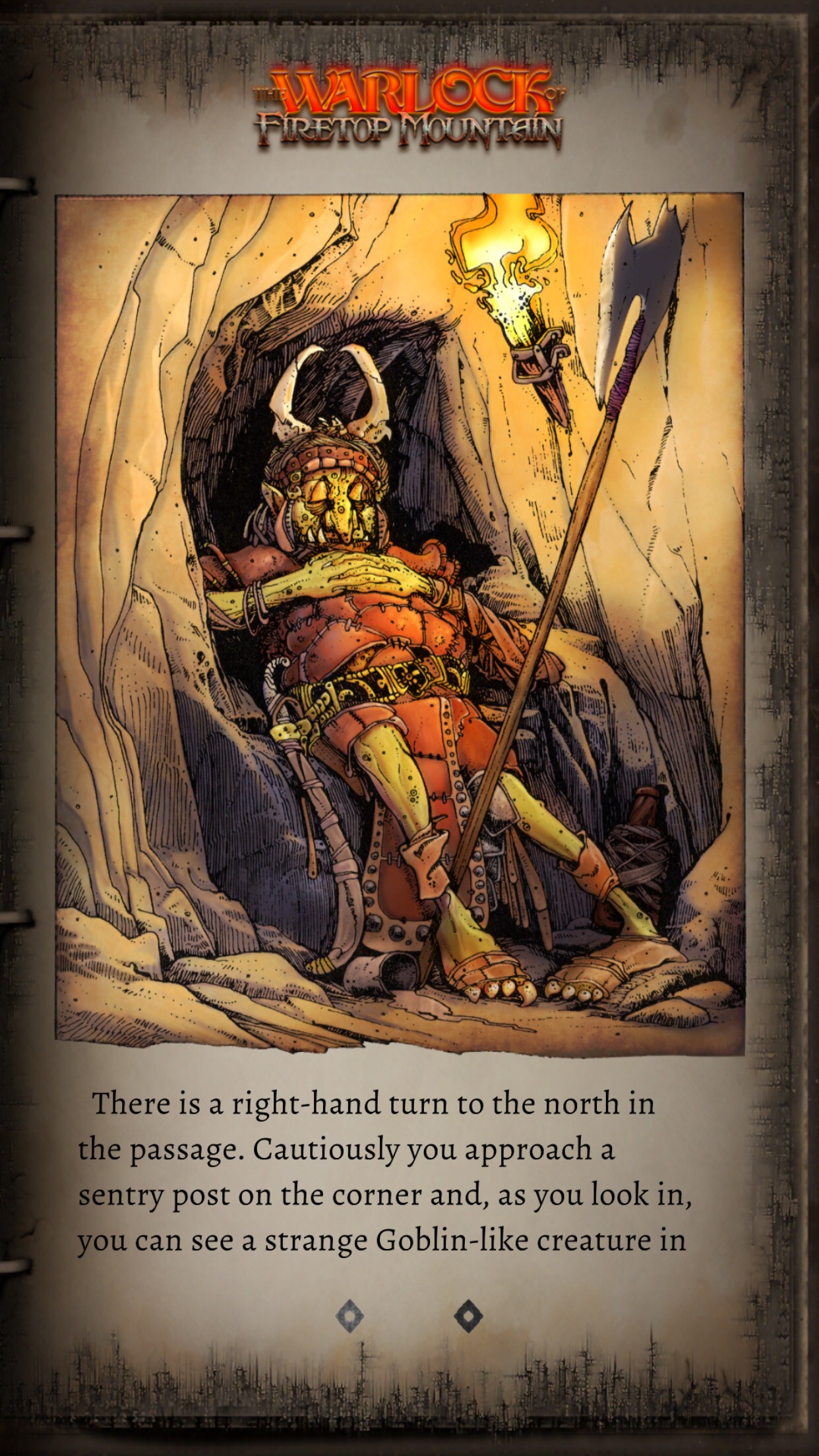 The main UI displays the books face-style on a simple shelf. You’ll see them all, whether you’ve bought them or not. If you own them, you can tap on them to zoom in, where you can access options and a gallery. One more tap opens the book. If you don’t own the book, tapping on it will allow you to purchase it. You can also update the books from this screen, which is done rather simply by tapping on them when you’ve zoomed in. There are a few sorting options for the order in which the books are displayed on the shelf, so you can keep whatever you’re playing near the top, sort them alphabetically, or leap into the abyss that is paying attention to the numbering on the covers.

You can also set your player avatar from here and choose from a number of ambient tracks to play in the background while you’re adventuring. Since there are only seven books currently available, this interface works well, but there may be a need for easier navigation as Tin Man fills out the library. I suppose we’ll have to wait and see. I’m sure those who don’t plan on buying every book might like an option to only see the books they have purchased, and there may come a day where having more books on each row or spining them on the shelf could be handy.

Of course, this is all just talking about the shell around the actual games themselves. I’m not going to do a full-blown review for each of these books here, but instead will just give a little bit about each one along with a link back to any existing reviews we have for the stand-alone versions of the returning titles. 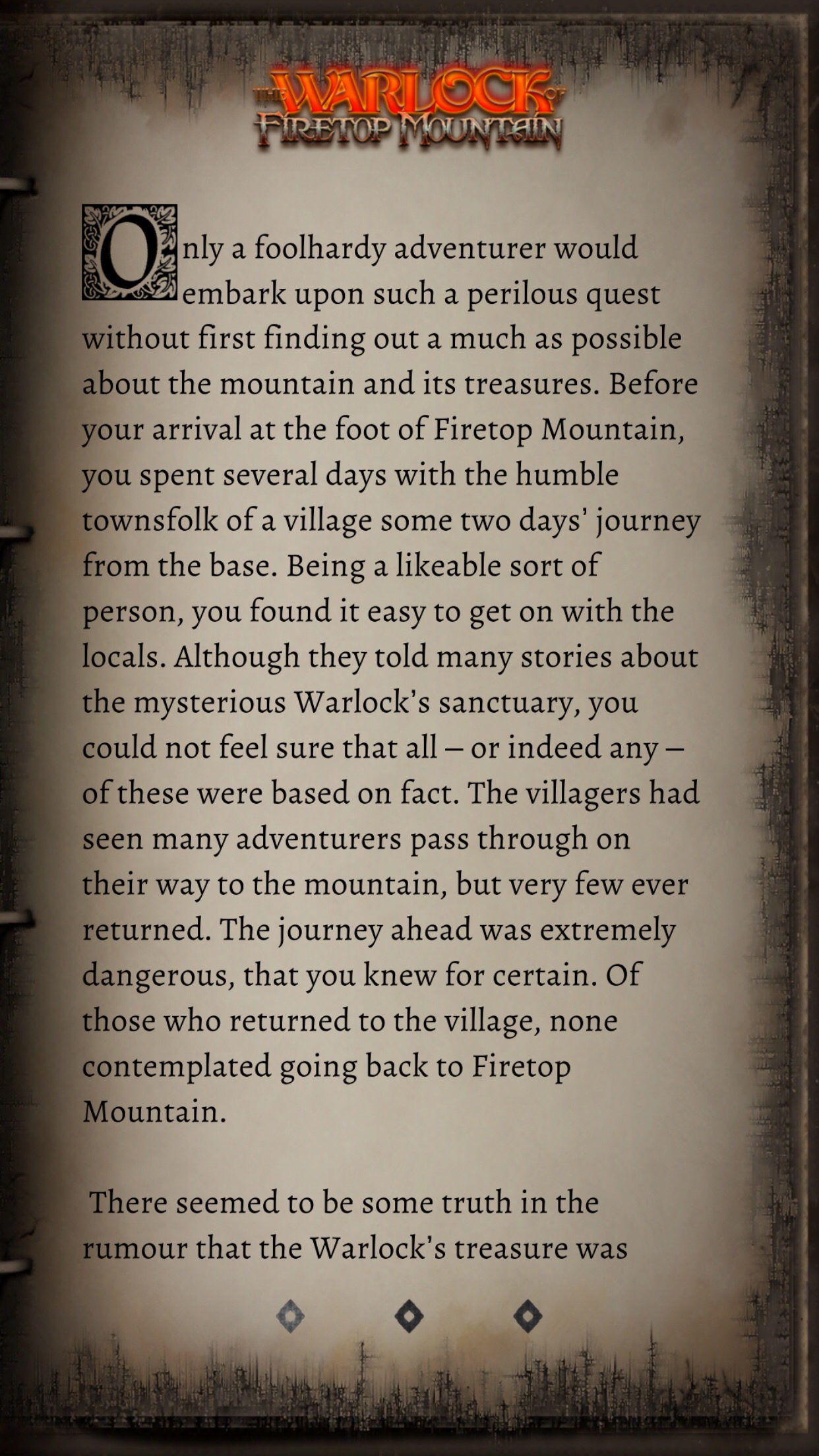 The Warlock of Firetop Mountain is the originator of the series and in spite of some rough edges, it’s a stone-cold classic. Steve Jackson and Ian Livingstone wrote this one together, and you can feel the sensibilities of both designers here. I think this is still a great gamebook, but you’ll want to be wary of the rather tricky maze that makes up the second half. You’ll definitely want to have a map of some kind to work from lest you get completely lost. Outside of that, this is one of the fairer books in the early line-up and is a decent place to start for those new to Fighting Fantasy.

The Citadel of Chaos is another newcomer to Tin Man’s library, but Fighting Fantasy fans will likely remember it all too well. This is one of my favorites of the early line. It’s written by Steve Jackson and while the basic theme and premise isn’t too far off of Warlock, the addition of magic makes it a very different experience. I really love the design of the titular citadel. You can see that Jackson put a lot into making it feel like a place that could actually exist. It’s easily worth the price of admission.

The Forest of Doom was previously made available as a stand-alone app. If you want a detailed summary of its strengths and weaknesses, we wrote a full review of that version. This one comes from Ian Livingstone, and like most of his gamebooks, it’s quite combat-heavy. The deadly forest is a nice change of scenery from the more artificial settings of the previous books, and if nothing else it’s certainly full of surprises. The ending is a little anti-climactic and it’s a little difficult to know which items you need the first time through, but this is still a strong entry. 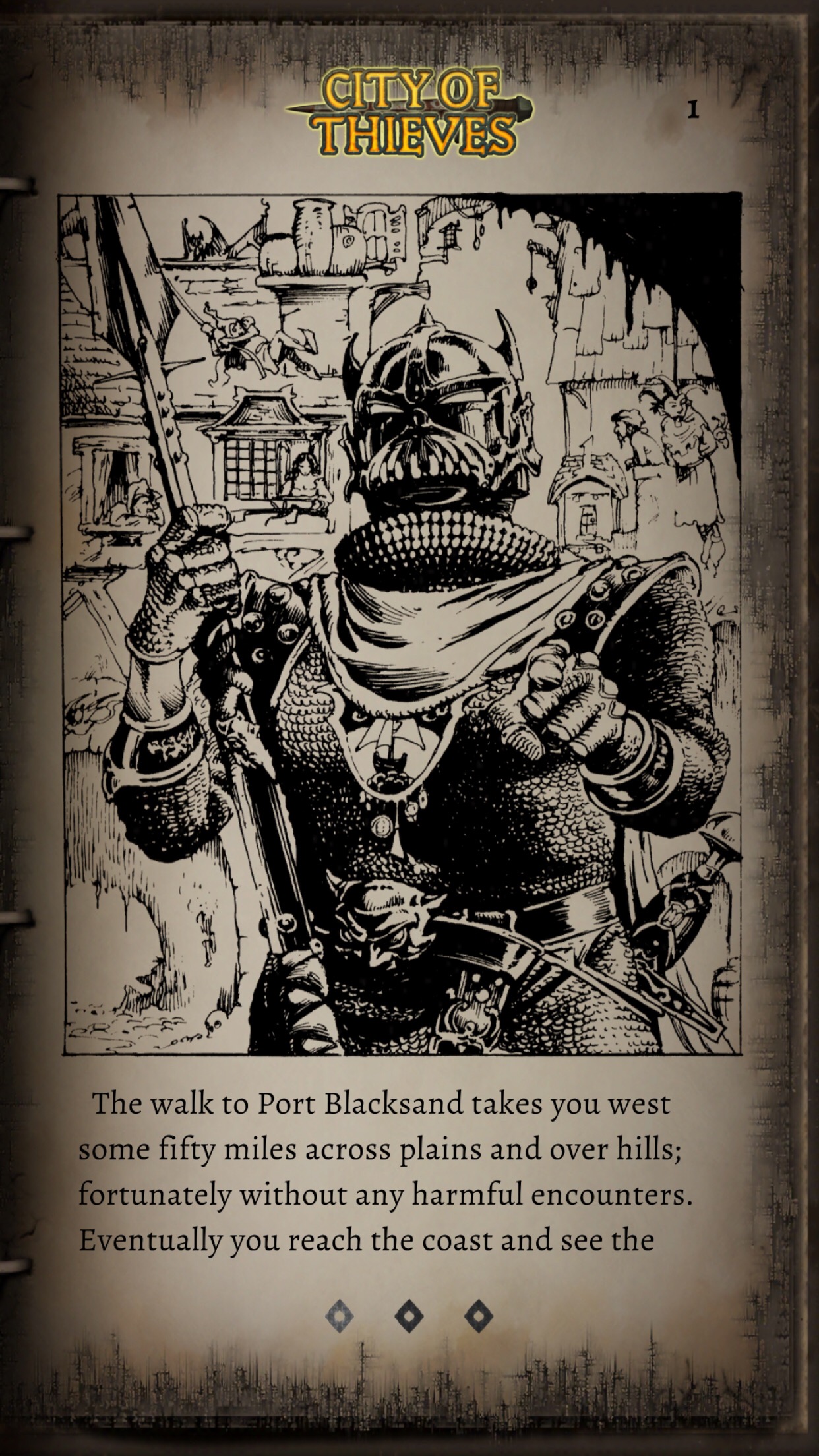 City of Thieves is a favorite of many Fighting Fantasy fans, and it’s great to see it finally join the Tin Man lineup. This one takes you to what must be the most awful city in the multiverse. It’s full of jerks, criminals, jerk criminals, and criminal jerks. Pretty much everyone here wants to kill you or rob you, and it’s hard to find anyone to trust. This is another Ian Livingstone book so expect a lot of fighting, but the setting is hard to pass up. Definitely worth a purchase.

Island of the Lizard King is a book I have some issues with, as you can see in detail in our review of the stand-alone version. It’s not bad, and the climax is outstanding, but it’s far too linear and combat-heavy for my liking. If you don’t care much about exploration and puzzles in your Fighting Fantasy books, you’ll probably enjoy this one more than I do. If nothing else, the illustrations in this one are absolutely dazzling.

Caverns of the Snow Witch is another Ian Livingstone adventure, and while it’s just as reliant on winning tons of battles as his usual fare, this is his longest and most grueling quest yet. The pacing is kind of weird and the last act is a bit limp, but for me this one feels the most like an on-the-fly pen-and-paper RPG session. I went into more detail about it in our review of the stand-alone version. It’s a real epic that is perhaps a little too lengthy for some people’s tastes. Definitely good bang for your buck, though.

Bloodbones came way later in the series than the other books available in this app, and in fact had its initial release canceled due to waning sales on the series. It finally made it into print in 2006 when the franchise was revived. This one is written by Jonathan Green, and it feels quite different from the others in this app both due to its author and the setting. It’s free so you’re going to be getting it in any case, but if you want to check out more details, you’ll find them in our review of the stand-alone app. I honestly found this one a little mean-spirited compared to some of the other Fighting Fantasy books, but its setting is awfully cool.

All in all, it’s a great selection that fills in some of the gaps that players have been asking Tin Man about for a while. There’s a very notable absent title that should be coming later on, but there’s plenty here to keep you busy until the next wave hits. The best of the bunch of City of Thieves, but there’s definitely something to be said for starting with Warlock and working your way through in order. As you would expect from this developer, the interface is excellent and they’ve given all of the little details the treatment they deserve. I can’t wait for the next batch of titles to come and hope that this is just the start of getting as many of the Fighting Fantasy books onto mobile as possible.