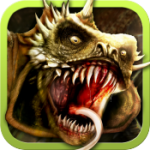 When game books first started appearing on the App Store, I wasn’t quite sure how well they would be received. For our younger readers, game books were basically the only handheld RPGs we had for the better part of the 1980s. They provided a lengthy adventure, packed full of surprises and action, and sometimes even told a good story along the way.

Like many RPGs, though, they were best enjoyed on your first playthrough. Once you had solved the book, you were probably finished with it. For a few dollars, it was a pretty good deal, and certainly won out over books of word searches on long car trips. On the App Store, game books are about the same price as a book, but they certainly present a different value proposition than they once did. Nevertheless, they seem to have found their niche, thanks in no small part to the superb efforts of Tin Man Games, who picked up the Fighting Fantasy license last year.

Fighting Fantasy: The Forest of Doom ($5.99) is the third Fighting Fantasy release from Tin Man Games, and what beautiful symmetry that is, because it was also the third book. We’ve seen adaptations of the very recent Blood of the Zombies and the horror-themed classic House of Hell, but until now, we haven’t seen any of the fantasy-themed books from the series. 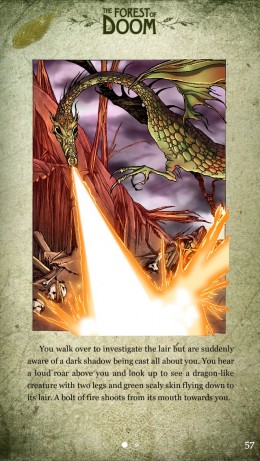 Forest of Doom is perhaps not as well-known as The Warlock of Firetop Mountain or Deathtrap Dungeon, but it is one of the more popular books in the series, and its cover is quite iconic. You play as a warrior tasked with finding a missing hammer and returning it to the Dwarven village of Stonebridge. It’s hidden somewhere in the Darkwood, which is frankly a very dangerous place to leave a hammer lying around.

The presentation here is nearly identical to prior releases from Tin Man Games. There are tons of options for tweaking everything from the font size to the look of the pages and pictures. You can select from three different difficulty settings, which include what amounts to a cheater’s mode (we all did it with the old books sometimes, be honest) and a hardcore mode in addition to the original book’s difficulty. All difficulty settings allow the use of bookmarks, which are basically save points, to take a little bit of the bite out of the sometimes harsh outcomes of the adventure. Your character sheet is automatically updated as you go, and whenever the dice need to be rolled, you get a nice, fast animation showing the roll.

One new addition to this Fighting Fantasy adaptation is an extremely welcome auto-map feature. The Darkwood is a pretty big place, and as Forest of Doom is one of the few early Fighting Fantasy books to allow you to play through again if you arrive at your destination without the quest item in hand, the map proves to be invaluable assistance for clearing the game. All of this is wrapped up in an excellent and intuitive user interface, making this the definitive way to enjoy Ian Livingstone’s first solo game book.

As for the actual adventure itself, it’s quite a good one. The Darkwood is huge and full of a menagerie of creatures, some friendly, most decidedly less so, and the road to getting the necessary items is a fairly complex one. At the beginning of your quest, you’ll be able to stock up on items from the wizard Yaztromo, but it’s very hard to foresee what you’ll need some of them for, and you can’t buy everything on your first pass.

Luckily, the book makes it perfectly clear which item you need to pass each obstacle, so even if you get tripped up on something the first time, you’ll know exactly what you need to bring on your next attempt. There are tons of extra items and encounters unnecessary to completing the quest, instead offering various stat bonuses and gold at the cost of wearing down your stamina. There’s a lot of variety in here, which makes for a very fun adventure. 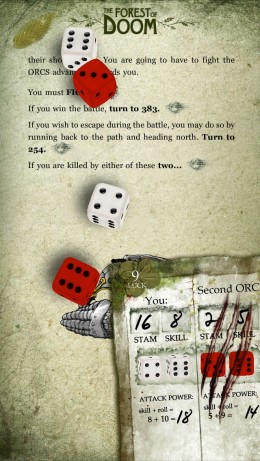 The story itself is quite threadbare, but Mr. Livingstone’s text is as rich and colorful as it ever was. Though you can avoid many monsters and finish the game more easily, you’ll almost want to fight every enemy you come across just to enjoy the accompanying descriptions of their appearance and actions. The text does a great job of establishing the foreboding atmosphere of the Darkwood, and you’ll find yourself really drawn in to the action.

Apart from the cover art, the pictures (which are acccurate to the book, but in color) are kind of mediocre, particularly when compared to the accompanying text. Pictures may be worth a thousand words, but I’ll take a thousand of Mr. Livingstone’s words over one of Forest of Doom‘s illustrations any day of the week.

This is a beautiful, wonderful adaptation of the classic book. It has every bell and whistle you could ask for in terms of making the experience of playing Forest of Doom as enjoyable as possible. If you’re here looking for the book on your iOS device, look no further. This is what you want. If you’re a fan of game books but don’t know this one at all, I give it a hearty recommendation. This is one of the classics of the genre and it has been given the usual royal treatment from the developer.

The problem comes for those of you who are just looking for a good game to sink your teeth into. Once you’ve solved Forest of Doom, you probably won’t feel the need to revisit it again for a long time, if at all. It will almost certainly take you several attempts to find your way through, provided you aren’t playing on the easiest difficulty, but the experience is over a bit too soon. If you’re looking for a game long on play, this might not be for you. For fans of game books, though, this one is a no-brainer.