Hearthstone (Free) expansions are an awesome avenue that Blizzard uses to shake up their online card game and introduce new mechanics and ideas. The next expansion, The Witchwood, has a spooky motif and we just found out a new deck type that is being introduced called Even-and-Odd Cost which has cards themed around the mana cost of cards in the deck. It looks like some classes will have support for primarily odd mana cost decks and others for even mana cost decks. This is speculative at this point but that’s the point of the incremental reveals of each of these Hearthstone expansions isn’t it? We get to see and evaluate cards based in a vacuum and then once the whole thing comes out we can fill in the blanks and see the full picture that each game update holds for us!

Some examples we have been shown so far include legendaries Baku the Mooneater and Genn Greymane. Each of these hinge on either building a deck with odd costs or even costs and providing a strong benefit for the effort. Going with Baku and an odd costed deck makes your hero power more powerful and using Genn and and even costed deck reduces your hero power to 1 mana. These cards have a rarely used mechanic called Start of Game so you don’t need to play these cards in order to get the benefit they provide.

Some more examples we’ve gotten for this format are the Black Cat, Gloom Stag, Murkspark Eel, and Glitter Moth. All of these seem very thematic for the classes they are in. Spell power and card draw are on a low costed minion for Mage. Druid gets a big health taunt minion. Shaman get a low cost removal minion and Priest get a health multiplier. It looks like beyond the theme, most of these cards will be instantly competitive also. I may end up being wrong, but it seems like the odd man out may be the Glitter Moth. If the moth is an indicator that Priest will be building primarily odd-cost decks, we can maybe assume that the old 0 cost shadow combo is still going to be a tough one to pull off which I cannot complain about having been the victim of many times in the past. Current competitive Priest decks do have some large minions but they don’t operate like zoo decks where a large number of minions are out all at once where the moth would see maximum utility. It will of course also depend on other cards within the new expansion as well. Speaking of which, you can see more card reveals for The Witchwood Hearthstone expansion on the Hearthstone Twitch Channel Monday March 26 at 11:00 am Pacific. 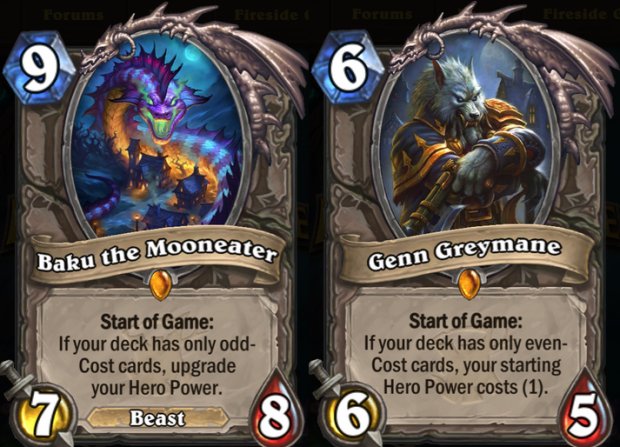