If you asked me what a typical Nitrome game is, I’d say it’s a fun game with good pixel art, some rockin’ chiptune music (provided you un-mute your iPhone) and a super generous free to play system that actually allows you to play through their games provided you have the patience to sit through lots of ads. Slime Pizza (Free) is the latest release published by Nitrome, but it was actually developed by Neutronized who have made a dumb amount of great games. (Which makes you wonder why they sign with publishers, given their track record?) Super Cat Tales (Free) and Drop Wizard Tower (Free) are two of my favorite games of theirs, but looking at their portfolio it’s hard to even pick. Interestingly enough, Slime Pizza seems to be a pseudo-sequel spinoff of sorts of Slime Laboratory 2, a Flash-based browser games that shares a lot of visual similarities.

In Slime Pizza you play as, well, a slime, obviously. The game kicks off with a non-sensical story where your space ship crashes, you get a computer virus, and you need to pick up pizza slices. There’s a bit more to it than that, but, the story is more or less irrelevant to the brutally difficult puzzle platforming you’ll be doing. As a slime, you stick to things, and unlike Slime Laboratory 2 where you can freely move around, in Slime Pizza you fling yourself with a familiar almost Angry Birds-y (Free) slingshotting mechanic. With some exceptions, you stick to most surfaces, and need to navigate through the game world by flinging yourself along and avoiding (many) obstacles and enemies that cause you to insta-splat and start over from the last checkpoint.

Speaking of checkpoints, the game plays a lot like the bazillion other games that has you collecting some kind of soft currency (in this case pizza) to unlock checkpoints to save your progress. These checkpoints are vital, as you will be dying a lot. A big part of playing Slime Pizza is discovering what does and doesn’t kill you, and coming up with a strategy to deal with it. For instance, while playing through the early game I came across a white dog in a room labeled “DOGGO" and figured it was friendly. Nope, it exploded me on contact. The next attempt I tried to avoid the doggo and it chased me down and blew me up again. Trial and error is everywhere, and figuring out what you’re supposed to do to overcome obstacles is really fun. Also, there’s a bit of intentional wonkiness to your movement, you are a slime after all, so mastering movement is another critical aspect of the game.

Interestingly enough, to unlock a checkpoint you must collect pizza in game then spend that pizza on a checkpoint. There’s no other way to get slices or unlock checkpoints. In games like this I’m typically hesitant to buy the no-ads IAP as they often also strip the challenge by giving you all the checkpoints for free, but that’s not the case here. Whether or not you pay to remove ads, everyone needs to collect pizza to progress. If you don’t buy the IAP, you can totally progress through the game, but as I mentioned before it’ll hinge heavily on your ability to put up with ads that play every few deaths. 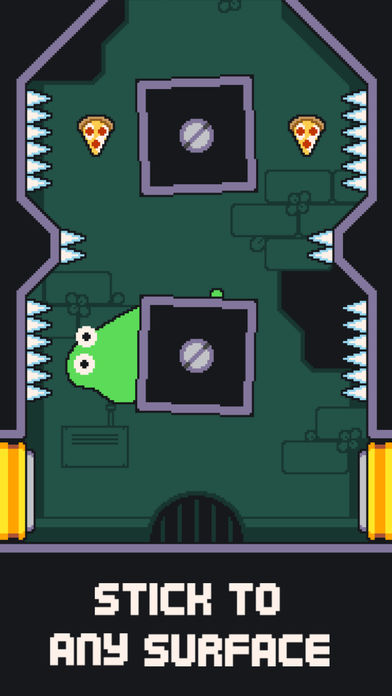 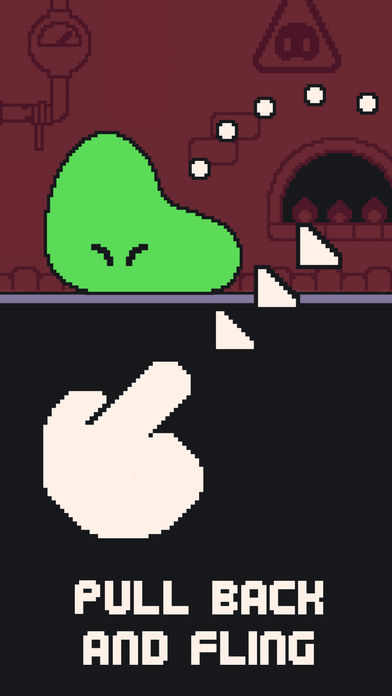 I really, really am hesitant to invoke the word “Metroidvania" to describe what playing Slime Pizza feels like, but there’s definitely a faint whiff of it in the air if you inhale deep enough. The ship you travel through has loads of Metroid-like rooms and doors and progressing sometimes requires a bit of exploration to find a key, boat anchor, or other item to get through. Give it a shot, and you’ll see what I mean.

Neutronized makes great games, and Nitrome publishes great games, so really it shouldn’t be any surprise to anyone that Slime Pizza is a ton of fun. And really, being totally free and with a super agreeable pay model I really can’t think of any reason to not download this game. If you find yourself playing it enough that the ads are getting annoying, flip ’em $3.99 to get rid of them. Or don’t! You do you.