Joe Richardson’s iOS debut game, Four Last Things ($3.99), is out. This is a port of a Steam game, but unlike most ports, this is the Dev’s first foray into the land of iOS. At Touch Arcade, we love to see developers take big risks to reach gamers that want to play their game and there is rarely a better way to reach as many gamers as possible than to release a game on iOS. There may already be quite a few point and click adventure games out there, but I think after a little investigation you will find that Four Last Things is something completely different.

In Four Last Things, you are a nameless wanderer in jolly old renaissance Europe. You are desparately seeking penance for sins you committed in a neighboring parish but to your dismay you find bishops barring your entry to the local church on the grounds that you have not committed those sins within their parish’s borders. So of course their obvious solution to the problem is that in order to be forgiven by their church, you will have to re-sin within their borders. You are sent off with a check list and the directive to go do something worthy of seeking forgiveness for.

If the artwork and plot aren’t an immediate give away, Four Last Things is a renaissance parody in the same ilk as those old Monty Python Terry Gilliam bits. The tone and tenor of the humor, however, is a little less british and a bit more modern. I say that with a tinge of sadness because for all its irreverence, Monty Python carries with it a certain nobility of idiocy and buffoonery. Unfortunately that nobility is not really carried over in full to Four Last Things. The jokes run a little too modern and a little too fourth wall breaking to hold the same air that I normally equate with this artistic style.

If sacrilege or immodesty are hot button topics for you, then you may need to steer clear of this game. In case you are unaware of those old Monty Python sketches or if you just happen to have too much nostalgia to correctly remember, it would be worth a few minutes of your time to look up a few on youtube just to see what I am referring to. In a lot of ways actually Four Last Things is quite a bit more tame than the Python boys in many instances. For example, in game the immmodesty comes in at the level of renaissance nude portraits and the sacrilege is mostly just a few pokes at how the church used to handle the forgiving of sins. Even with that in consideration you may want to be careful about where you play and who you have play this game. 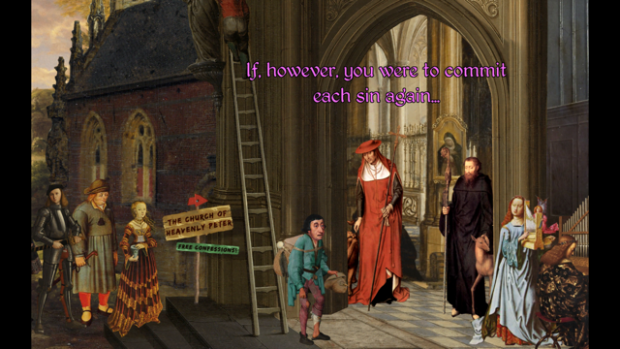 Once you start off on your quest to complete your checklist of sins, what you will find is a point and click type of adventure game simliar to Grim Fandango ($4.99) or Monkey Island($2.99). Four Last Things isn’t out to stump you with complex or arcane puzzles. You can think of it more along the lines of a medieval Rube Goldberg device. In order to gain access to the church you wil have to wind your way through a series of chained interactions that are for the most part simple logical steps. Being aware of every item on screen that can be interacted with is usually the best way to get through any individual part of the game. The nice part about that is there is a button inside the inventory screen that will highlight anything currently on screen that can be interaced with. In practice, this functions as a nice hint button that does not give away the whole mystery of the game and just makes sure that you are not missing anything.

The score for the game is drawn from public domain material and feels very much at home. Each room, courtyard and street you venture down has its own song and interactible musician. One thing I wish the game had is a little more interactivity with the audio components. In almost every scene, you have a musician or group of musicians that have basically a description of the song being played, an option to sing along and an option to clap for the performance. There is very little deviation from this pattern and it robs the musicians from possibly playing a larger role in the story or being more than a wall decoration that gets passed over for other people you need to interact with. 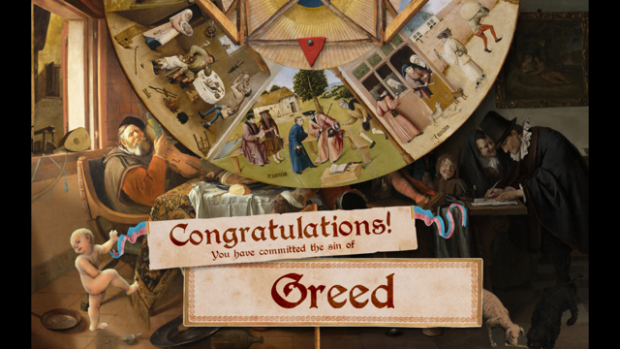 Four Last Things is a great example for folks that have a heart for game development but not neccessarily the most cutting edge coding chops. In his blog, Joe Richardson shares some of the inner workings of a one man shop and talks about the tools he uses to overcome some of the technical difficulties he encounters. I found it a pretty cool follow up to actually playing the game since it does have a few spoiler-y tidbits inside. What is really cool about this is that normally going cross-platform like Joe here is doing usually involves a lot of custom coding and technical effort that can be very daunting. Any time we can see an instance where tools can be used to overcome tech barriers like this is an amazing thing.

Overall the game completes very quickly but you get to see some great art and goofy slapstick hijinks along the way. It does seem like there are multiple endings and even though I have not yet explored them, there may be some replay value in this game after completing the first time. The app store is getting to the point where you can say something like, “I want to be inside a Terry Gilliam cartoon" and expect it to happen which is utterly amazing. Four Last Things has managed to find a really fun and goofy foothold where very few games can compare.