Now this is how you do a remake. Oddworld: New ‘n’ Tasty! ($4.99) is a rebuild of the original Oddworld game, Abe’s Oddysee, and it doesn’t do any of it by half-measures. The graphical improvements are obvious, but there’s also a ton of new content and even some expanded mechanics in the game. While it’s always a risky move to change things in a classic, you can tell the developers had a good sense of what worked and what didn’t in the 1997 original. New ‘n’ Tasty! has almost all of the strengths of Abe’s Oddysee and very few of its weaknesses, and its theme is (sadly) just as relevant today as it was two decades ago.

This remake originally debuted on PlayStation 4 in 2014. It made its way to a variety of platforms over the following couple of years, and with all of the other recent Oddworld projects on mobile, it was only a matter of time before this one followed. I suspect the toughest nut to crack was with the controls. New ‘n’ Tasty! is a PlayStation 4 remake of a PlayStation 1 game, and both the new and the old make extensive use of the many buttons on the PlayStation controller. Controls were a sticking point for many players with the other Oddworld mobile ports, and given the added precision required by a game played from a 2D perspective, it was probably even more important to get them right here. 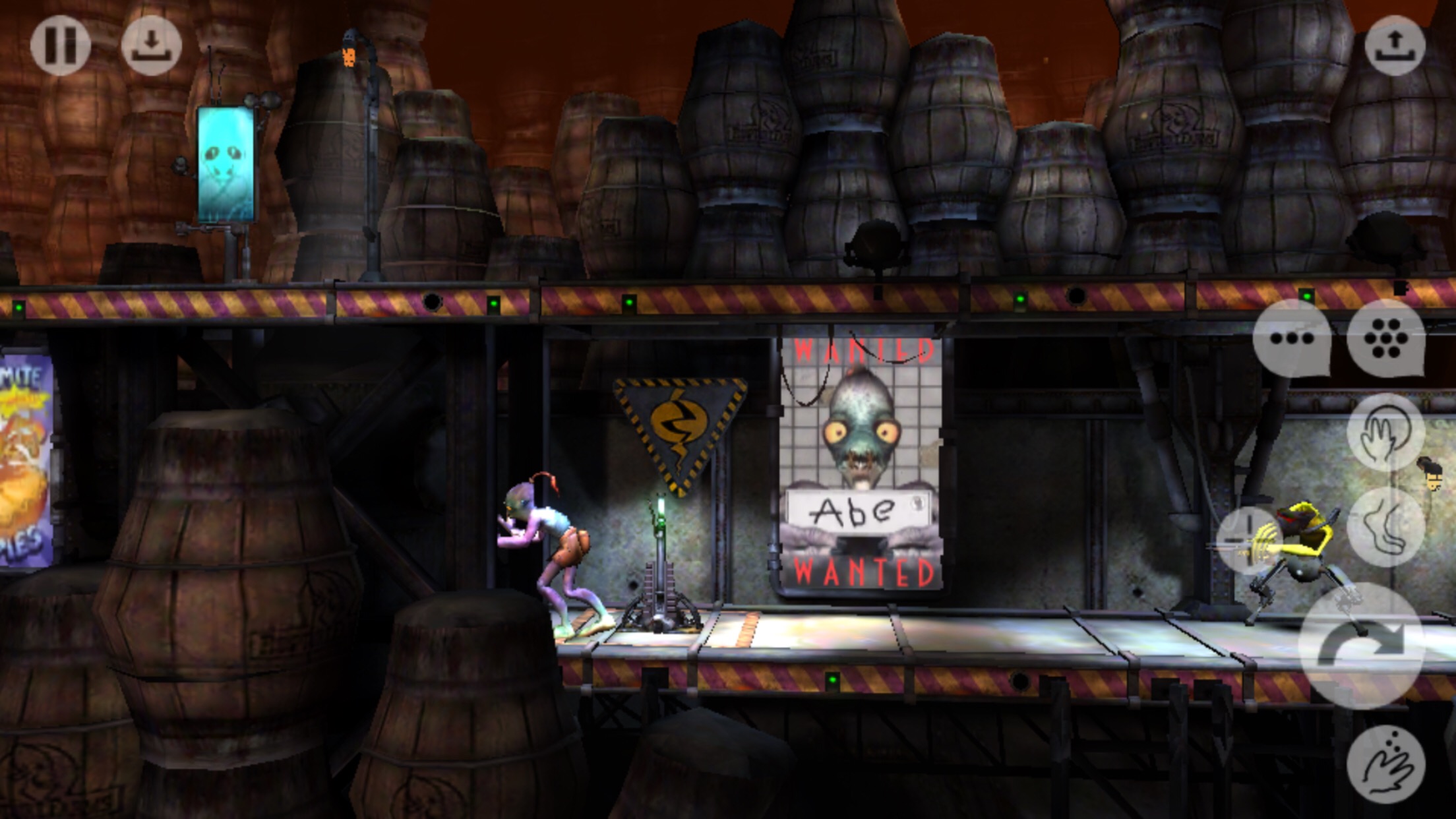 Personally, I think they did as good a job as they could have. Abe moves left and right by swiping on the left-hand side of the screen. Swiping up makes up jump straight up to grab a ledge or whatever, while swiping down makes him crouch or moves him down a platform where possible. An assortment of buttons is scattered across the right side of the screen, and some of those buttons have sub-buttons that will open up when you tap on them. You can arrange all of those buttons as you like, but I won’t tell fibs to you: it’s a lot of buttons. If you’re averse to virtual-button controls, you’re going to have a bad time here. That said, if you are that type of person, I’d hope you would have an MFi controller. If you do, you’re in luck! New ‘n’ Tasty! supports MFi controllers, and it’s a great way to play the game.

That disclaimer in place, I really have to stick up for the touch controls a bit. I more or less just went through this entire game in a couple of sittings and I don’t think I felt any frustrations with the touch controls that I wouldn’t have also had on a controller. New ‘n’ Tasty! is a puzzle-platformer, descended from games like Prince of Persia, Another World, and Flashback. As in those games, there’s a fair bit of trial and error at play here, and your character can be a little clunky to control at times. The original game’s often-frustrating difficulty has been mitigated somewhat here, however. First, there are a few difficulty settings that will affect a variety of things like enemy behavior, Abe’s health, and so on. The hard mode here is probably the closest match to the original game’s difficulty level, leaving a couple of nice options for those who want a less aggravating experience. 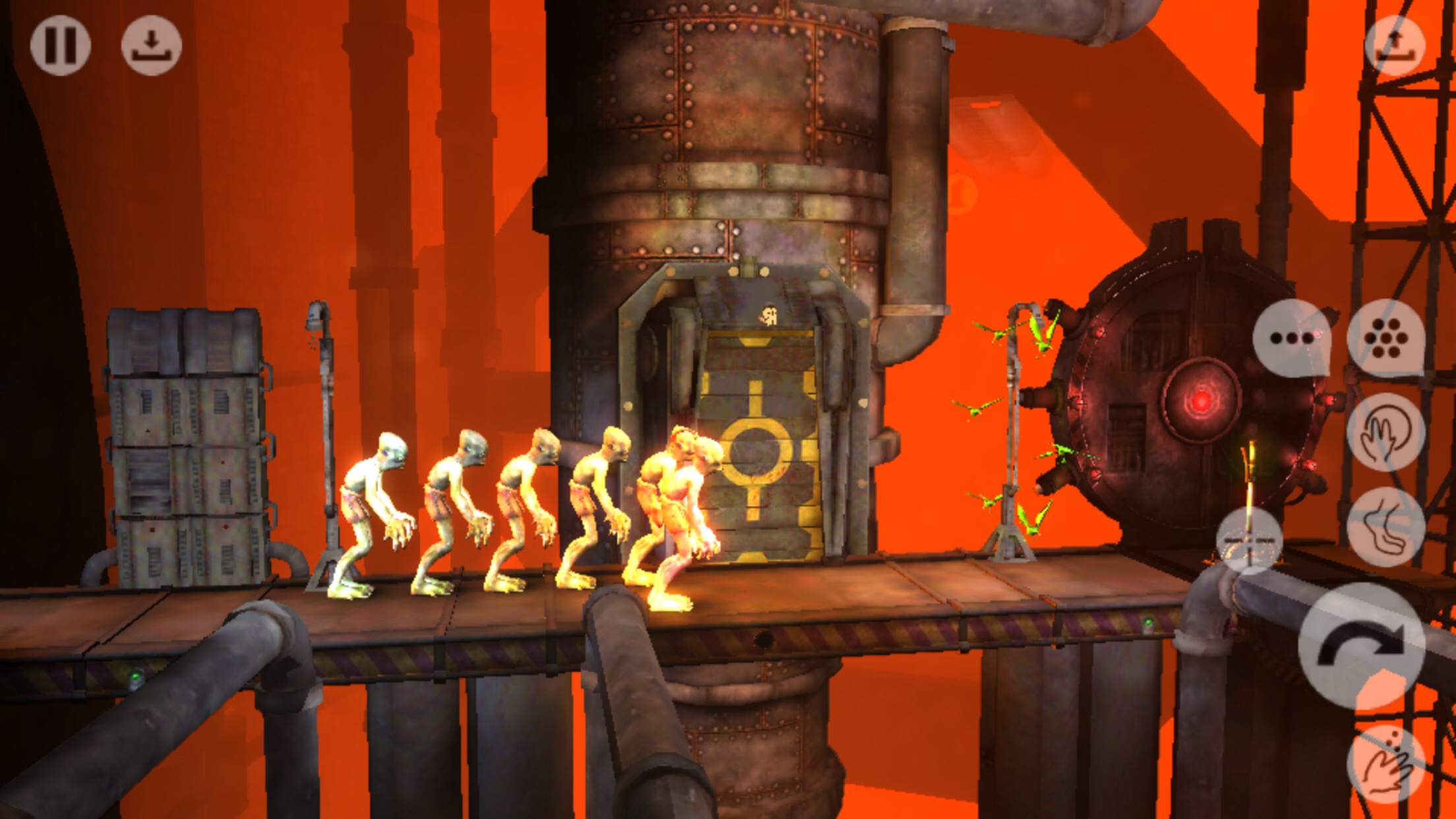 Better still is the presence of buttons for quick saving and quick loading. So long as you’re making judicious use of that quick save button, any mistake is just one little tap away from being undone. I’m pretty sure the game has more checkpoints than it did in the original PlayStation 1 version as well. It’s up to you how much you want to lean on these options. I think the game presents a reasonable challenge even on its lighter settings, but if you want to relive the glory days of getting pummeled by a random rock to the head and having to do a sequence all over again, you can definitely choose to do so. Just keep in mind that the difficulty curve spikes up after you get past the first level.

One of the things that made the original game so interesting is in Abe’s actions. He’s hardly a normal video game character. Sure, he can jump and climb, and he has a mean pitching arm if you find some grenades. But most of the things Abe does are a bit more indirect. He’s able to interact with a variety of environmental objects like switches and buttons, but his greatest power comes from his ability to communicate. Abe can greet his fellow Mudokans and give them a few different commands. He can also whistle a couple of tunes, laugh, fart, and chant. That last ability is a crucial one. While the main goal is to get through the levels, you’ll also need to rescue most of your fellow Mudokans if you want to get the good ending. You’ll have to escort them to the nearest portal and chant to send them on their way.

Chanting can also be used to possess certain enemies called Sligs. You won’t always be able to do this as there is often an anti-chanting field in effect, but making good use of this ability is crucial to solving some of the game’s puzzles and just generally making an easier time of things for yourself. There are a couple of other cool abilities that open up as you make your way through the game, but it’s best to leave some surprises for those who are new to it all. Suffice it to say, you need to think differently about how to deal with enemies and traps in this game compared to what you may be used to. Abe’s more of a lover than a fighter. But just remember that while he may not kill you, he doesn’t have to save you, either.

Oddworld: New ‘n’ Tasty! is a faithful port of an excellent classic remake. If you game with an MFi controller, it’s a ridiculously easy title to recommend. In the absence of that option, you need only ask yourself how well you can cope with what is a relatively complex layout of virtual buttons. If nothing else, the controls are better here than they were in the other mobile Oddworld titles. If you were okay with those games, you’ll be more than fine here. If not, you may want to skip this one. But I really do suggest giving them a solid go. The game is fantastic, and if you have to spend a little time adjusting to the controls to experience it, you’ll still find the effort worth it in the end.