For whatever reason, it seems like the fourth quarter of 2017 has been an absolute golden age of ports hitting the App Store. Playdead’s Inside (Free) was just released, and we were lucky enough to be able to play through the game beforehand. As far as the iOS port is concerned, Playdead absolutely knocked this one out of the park. It’s totally universal across the iPhone, iPad and Apple TV, optimized for the iPhone X, supports MFi controllers, and has totally seamless iCloud save syncing. The touch controls are even well done, and it’s a free download with a one-time $6.99 (as of this writing) unlock. If there’s a box they’re not checking with this port, I don’t know what it is. Unfortunately, I’m just not sure if I really enjoyed the game that much… But, more on that later.

To give a little history on the legacy of Inside, it’s effectively a spiritual successor to Limbo ($3.99). (A game which we also didn’t like that much, resulting in a review which was far more controversial than we expected.) Inside was originally released last summer on the Xbox One, PC, and PlayStation 4, with about a month between each platform’s release. It takes place in a mysterious, surreal dystopian world with an actual color palette instead of Limbo’s stark black and white art style. It was generally received favorably by critics, and won loads of awards for its art direction and sound design.

Inside starts with a bang, with absolutely no introduction. The game loads, and there you are, a boy running through the woods. You continue running to the right, and quickly begin to realize that something isn’t right here. You see humanoid figures being loaded into a truck and eventually encounter some guards. Chances are, they’ll kill you- Not just kill you, but violently strangle you. You then respawn a few seconds back at a checkpoint, and the trial and error begins of what sorts of things you can possibly do differently to avoid being killed by the guard.

The rest of the game more or less persists in a similar fashion. You’ll be mauled to death by dogs, shot to death, fall to your death, get tasered by robots, run over by pigs, drown, and so much more while solving puzzles to keep the game going. These puzzles start simple, and initially just involve moving boxes around to get up on a platform that’s a bit out of your reach. However, it won’t take long before you’re plugged into a mind control helmet to control these husk-like humanoid creatures, solving puzzles involving switches, levers, raising and lowering water, and loads more. 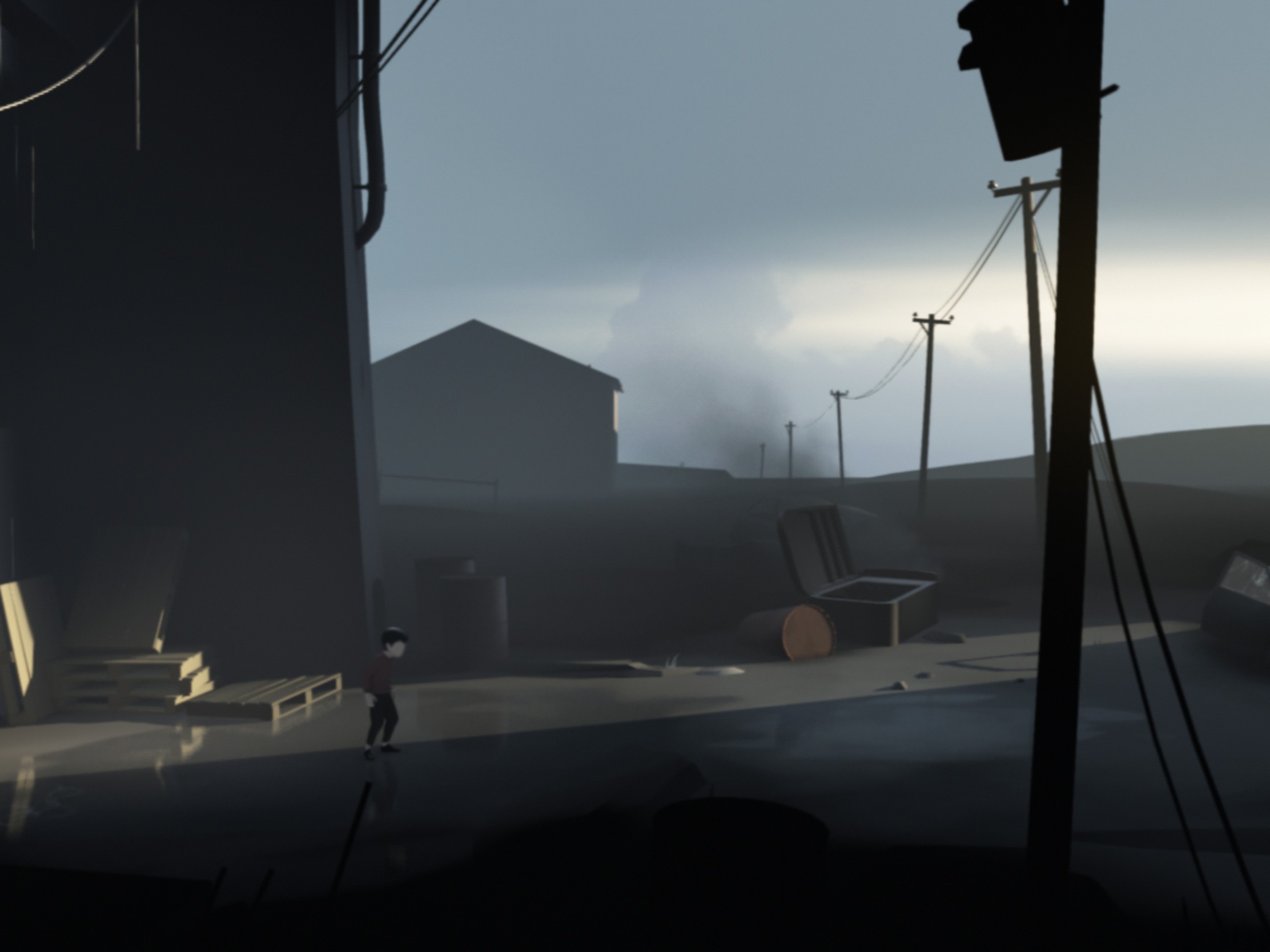 What I didn’t like about these puzzles is that it rarely seemed like there was any middle ground between those that are incredibly obvious and other puzzles that leave you totally stumped. One of the things that makes Inside so beautiful is there’s absolutely no UI, or any visual clutter beyond turning your device into a window looking inside of this strange world. Unfortunately, that also sometimes leads to what can be best described as adventure game pixel hunting. You know when you’re playing Monkey Island, or any similar game and you’re not sure what to do next so you just start clicking absolutely everything? More than a few of Inside’s puzzles gave me a similar vibe, as rarely are you given any kind of cue as to what you’re supposed to do next- You just die until you figure it out.

Even more irritating is the number of things in the game which will just kill you with absolutely no indication to the player that it’s even hazardous. You’ll trip over seemingly innocuous bumps in the game world while being chased, stumble, and die. You’ll walk over boards that break, falling to your death, and many other things like this. The checkpointing system is generous, so you never lose any progress when this happens, but it’s just exhausting to constantly feel like the game is saying “HA HA! GOT ‘EM!" so often in ways which aren’t even that interesting. 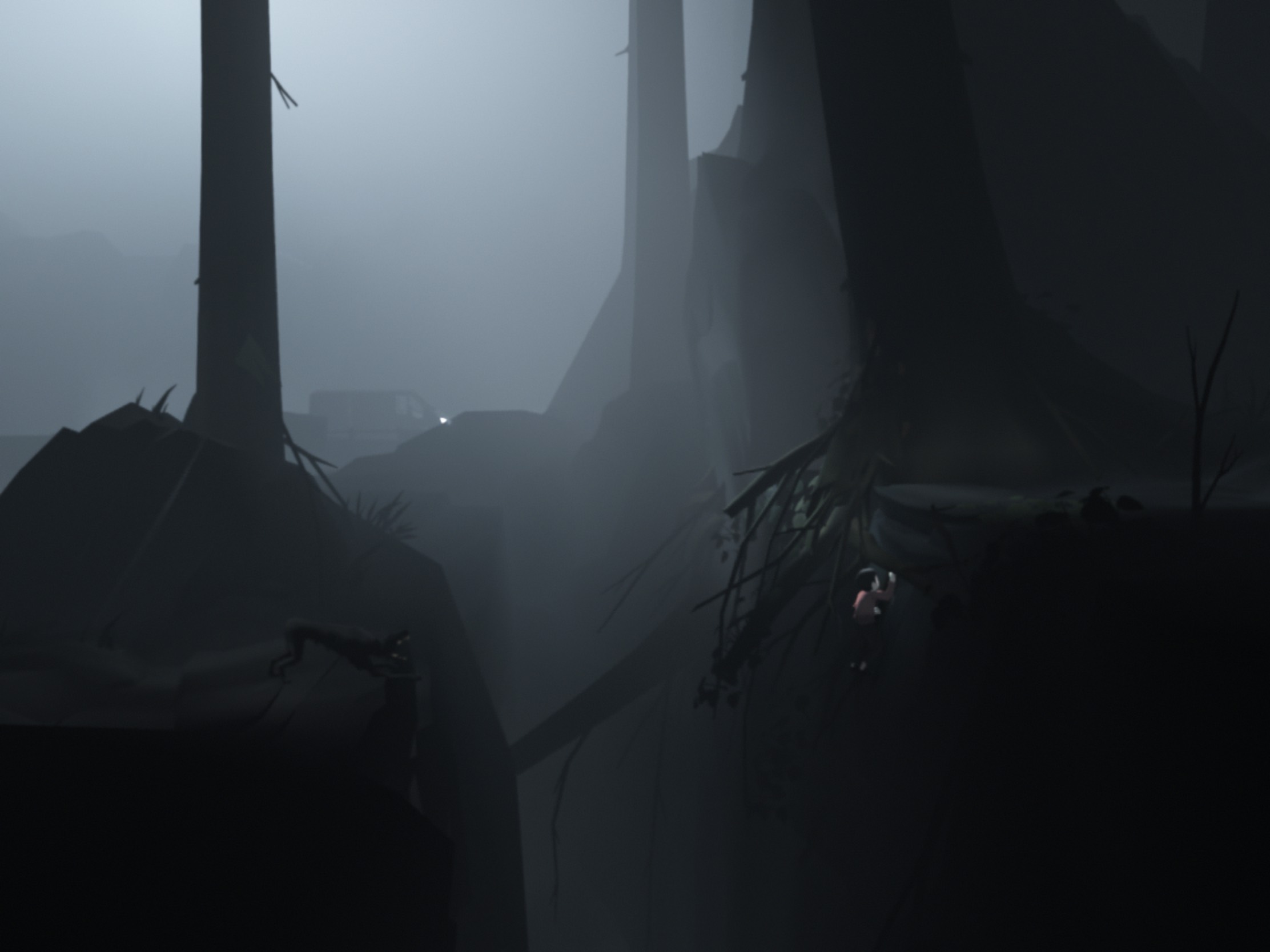 This all just becomes generally draining to keep playing, particularly as every mistake you try as you hunt for solutions results in an incredibly grotesque death. The game’s atmosphere also really begins to fade when you’re constantly being pulled out of it dying over and over due to frustrating puzzles and death traps. I suppose you could argue that playing a game like this is supposed to be draining and frustrating, but that’s really just not why I typically play video games.

The problem is, I think I’d have enjoyed just watching a YouTube video of someone else playing Inside more than I liked playing it myself… Which is a real weird realization to come to when you’re trying to review a game. In doing so, I’d experience all the art and sound, along with the ending which is ambiguous enough to spawn fan theories, all without the grueling repetition of trial and error death puzzles.

Anyway, without an MFi controller connected, you’ll make your way through the world of Inside with touch controls that work quite well. You move your finger right or left to send your character running in that direction, swiping up jumps, and touching and holding the screen allows you to interact with objects in the game world. What’s especially neat is that these swipes aren’t separated by the left or right side of the screen like a lot of virtual controls, instead you really just play with one finger. This initially may feel a little odd, as we’ve been programmed to move with our left thumb and jump with our right thumb, but after a brief adjustment you’ll be dying over and over in the hellscape of Inside. 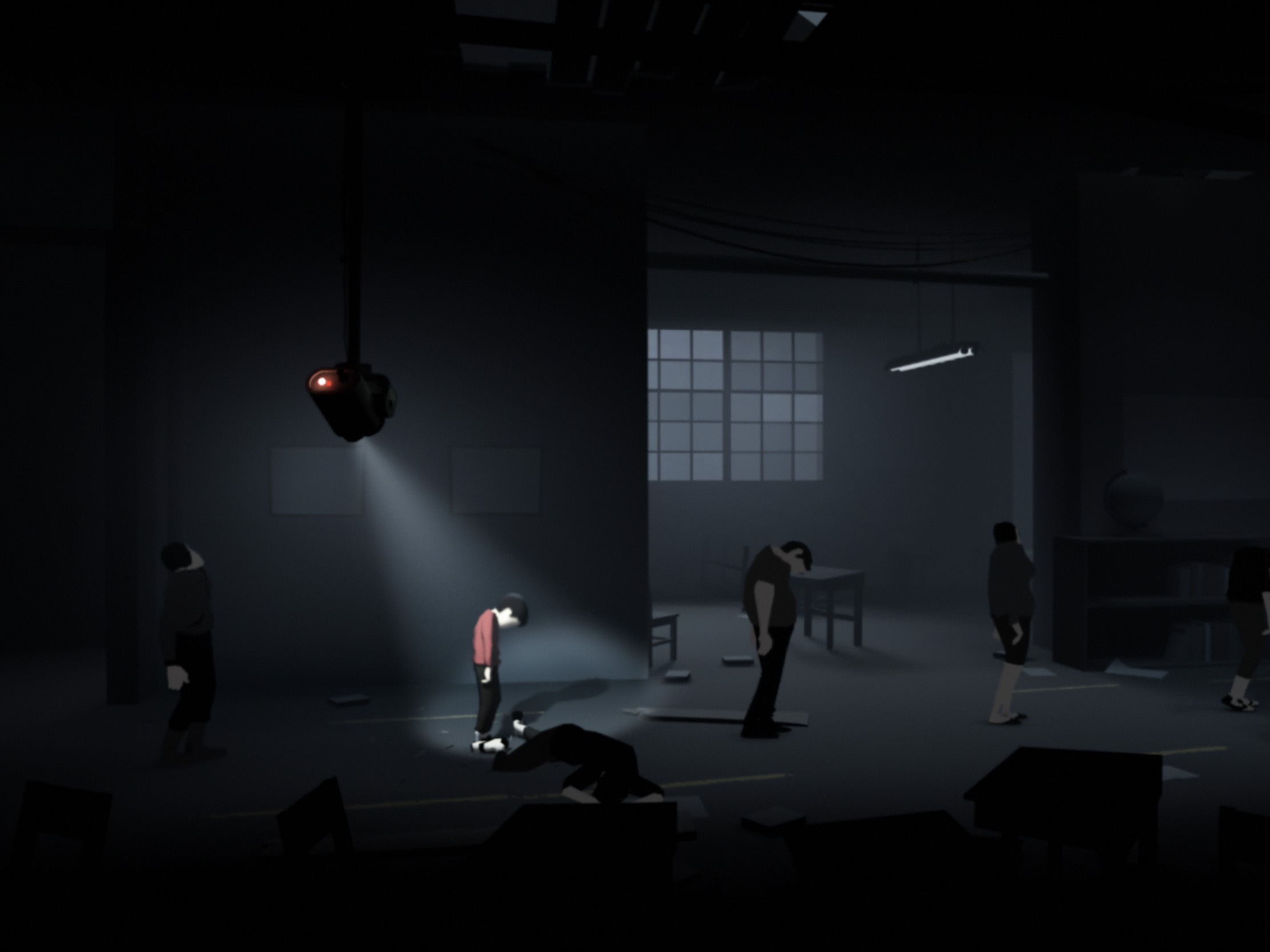 Inside is also a game you’ll want to play with headphones if possible, as the sound design is incredible and adds loads to the overall atmosphere of the game. If you’re the kind of person who typically plays mobile games on mute, don’t make that mistake here.

This is a weird review, of a weird game. I probably would’ve scored Inside quite a bit lower had the port not be so unbelievably well done. I started playing it on my iPad, and it occurred to me that I should check and see if it’s iPhone X optimized. I downloaded the game on my iPhone, and not only is it in full iPhone X widescreen, but it just automagically loaded my save game from my iPad on the first launch without me needing to do anything. This kind of cross-compataibility and iCloud syncing magic is the exact kind of future I want to be living in. Developers bringing their games to the App Store from other platforms should take a good long look at Inside. 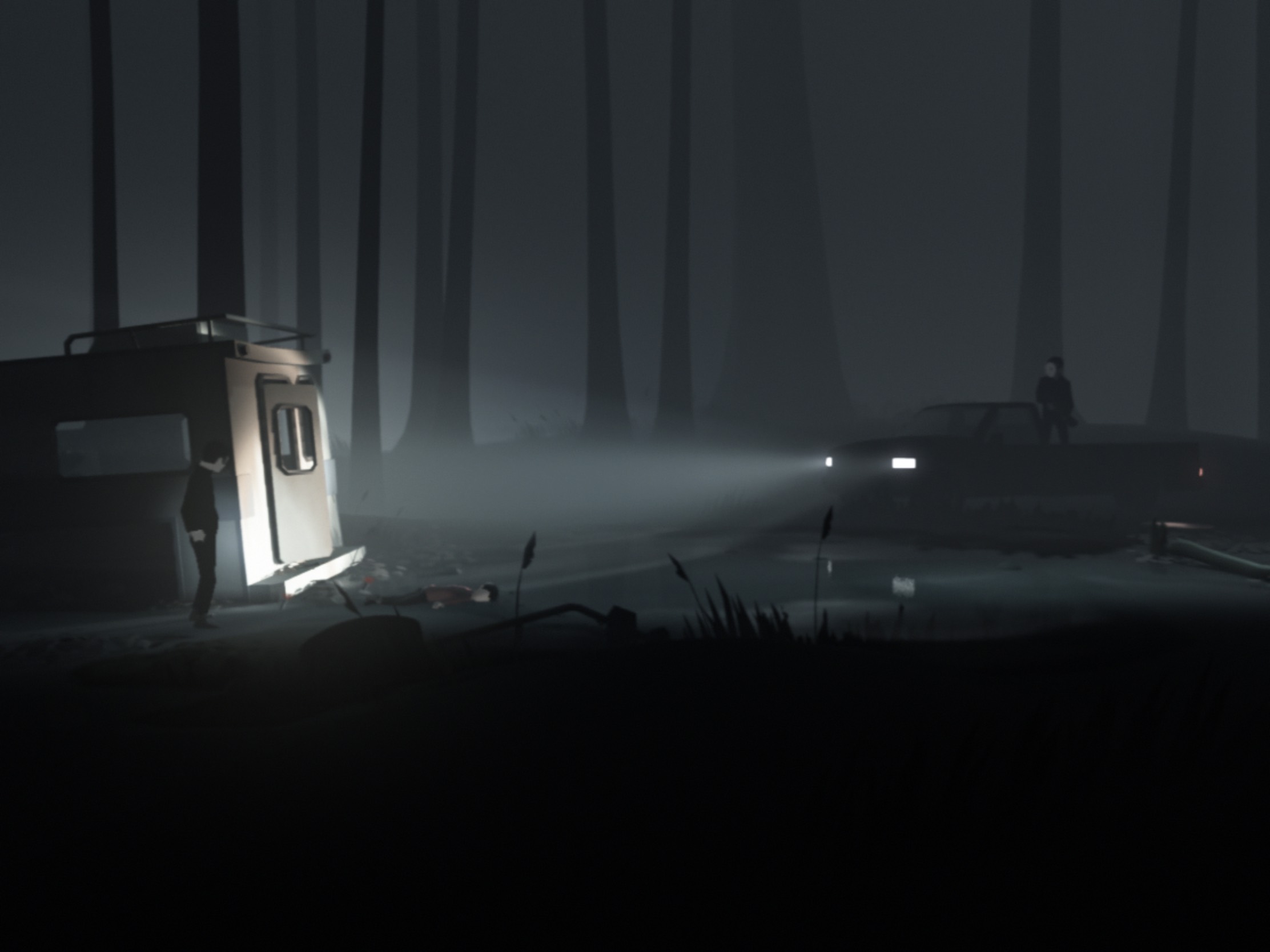 If you enjoyed Limbo (or similar trial and error puzzle games), chances are you didn’t even need this review to smash the buy button- You’ll really dig Inside. However, if you’re like me and aren’t really into the obtuseness of it all, there’s a lot to like about it but I’m not sure I’d consider the game a must-have.