Hello everyone, and welcome to the last Touchstone Tavern prior to Hearthstone‘s (Free) Kobolds & Catacombs release. Finally, we’re only a few days away from a ton of cool cards joining the game, and I (and many others) can’t wait to start building all sorts of fun and silly decks (and, occasionally, some strong ones). As you would expect, last week’s news was all about the expansion and the many new card reveals, but there were also some other fun happenings (like the Critical Role episode). Also, only a few days left before we get the Dungeon Run mode, the new single-player mode that will give players even more to do in-game. Overall, the upcoming expansion appears to have awoken the community from its relatively slumber, and that can only mean good things for the game.It’s a good time to be a Hearthstone player.

In what was an unsurprising twist, Blizzard announced that the Kobolds & Catacombs expansion is releasing December 7th in the Americas and the 8th in Europe. Everyone was suspecting that the 7th would be the day, but it’s nice to finally know exactly when it’s going to drop. The expansion brings over 130 cards to the game, and—judging from the reveals—it’s going to be a fun one to play around with. Remember that the pre-purchase of the 50 packs will soon be done, so if you’re thinking of using real money, grab those 50 packs soon. 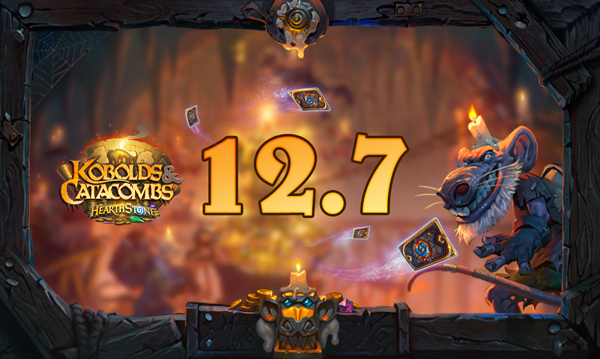 In what was a union of fandoms, Geek & Sundry’s Critical Role did a Kobolds & Catacombs show that was very fun to watch. The popular voice actors’ group put together a fun story that played around with the silliness that is Kobolds & Catacombs, and it’s definitely worth a watch. Head over here for more.

This story looks at how the new mechanics and ideas coming into the game as part of the upcoming expansion could make the game impenetrable for new players by introducing a higher skill ceiling with less randomness. Also, the writer thinks some new cards’ text is confusing and will further puzzle new players. The article includes some other interesting observations, so check it out here.

The Darkness is the Biggest Minion Ever Created

If you want to go big in the upcoming expansion, you should go with The Darkness, the huge minion revealed earlier today. As this story details, this 4 mana 20/20 Legendary is, well, huge, and even though it requires the opponent to draw three Candles cards from the deck before The Darkness awakens, it’s still a pretty crazy card. Can’t wait to play it, even though it might be too hard to trigger. What do you think about The Darkness?

If you’ve watched the final Kobolds & Catacombs card reveal stream, which took place today, then you’ll know that it was filled with non-stop laughter thanks to Ben Brode and Day9. As this story talks about, it was the best card reveal stream yet, and also the longest one ever. In addition to plenty of laughter, the stream also revealed a ton of cool new cards. Check out the story and the laugh-filled stream here.

Kobolds & Catacombs is a Challenge to Localize

When most of us play Hearthstone and enjoy its crazy lines and overall silliness, we don’t often think of the challenge that it can be to localize the game for all those playing it outside of English speaking countries. This article looks at the exact challenge and how the developers have been working to overcome it. And it’s not just issues with various linguistic quirks; art often needs to be changed as well to better fit a country’s culture. An interesting story about things we don’t often think about, so check it out here.

Blizzard Continues to Assess the Game’s Value for Money

The debate over Hearthstone‘s “pay-to-win" status and its rising cost has been going strong for months if not years. This interview with art director Ben Thompson details what Blizzard is doing to assess the game’s value for money, even though it doesn’t contain any details on actual future actions. Do you think the game is too expensive, or is it par for the genre?

Three Cards That Should Retire to the Hall of Fame

With every new expansion, new discussions arise on whether some older cards should head to the Hall of Fame to make space for the new ones. This article looks at three of those: Ice Block, Houndmaster, and Bloodlust, each for its own reason. The writer goes on to detail the reasons behind this argument and adds a few more that might also need to end up in the Hall of Fame—Mind Blast, Wild Growth, Brawl, and Archmage Antonidas.

I like when matches end in complete silliness, and that was definitely the case in a recent DreamHack Winter 2017 match. The lovely Swashburglar led to a Cabalist’s Tome, which gave the player three random Mage cards, and one of them was pretty much the only one that could have saved him. Head over here for a pretty crazy video.

The Most Disgusting 10 Minutes of Hearthstone

Welcome to the Dragon Circus

Most Insane Bug Ever