Rockstar first released LA Noire in May of 2011 on the PlayStation 3 and Xbox 360, and has seen a recent re-release on the Switch, Xbox One, and PlayStation 4. Both the PS3 and Xbox 360 versions of the game are sitting at a solid 89% on Metacritic, which shouldn’t be much of a surprise as Rockstar games typically always fall somewhere on the spectrum of “really good" to “great." As the title not-so-subtly hints, LA Noire distills basically every film noire trope into a video game where you’ll be driving around Los Angeles solving crimes as a larger overarching plot line reveals itself as the crimes turn out to be related. 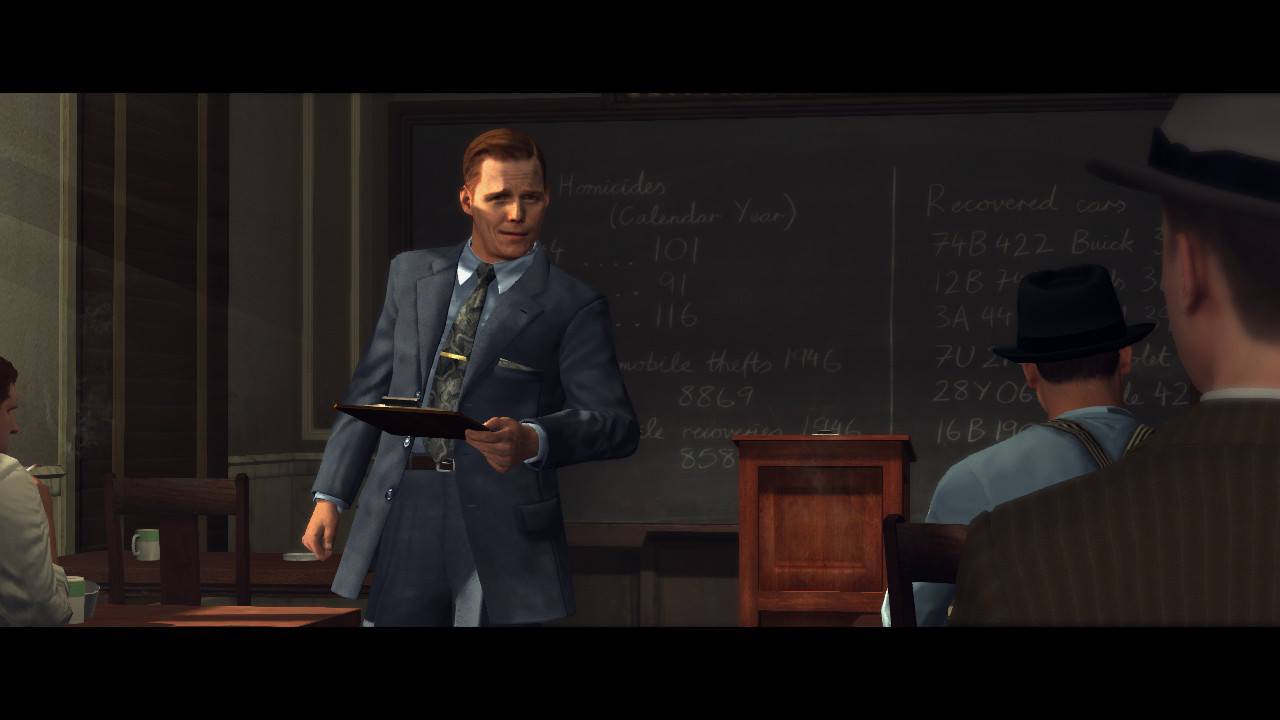 LA Noire was a technical feat when it was first released, and unlike many older games that lean heavily on a specific technical showpiece, the game has aged surprisingly well. Basically, by 2011 motion capture technology in both video games and movies was getting pretty good. Sports games of the time, in particular, were really starting to look far more lifelike as developers continued capturing more and more movement data points. LA Noire was the debut title of a technology called MotionScan: The characters in game are played by real actors, and the facial animation seen in game is a composite of 32 individual camera feeds capturing even the smallest facial movements.

Quick sideways glances, small facial ticks, and other unbelievably subtle movements are all captured with shocking amounts of clarity. Rockstar and Team Bondi paired this technology with one of the primary gameplay elements of LA Noire: Closely watching your subjects to use this subtle body language to drive intuition as to whether or not you’re being lied to. This gameplay mechanic was fairly controversial at the time, and a little over six and a half years later I still am not sure whether or not I like it- But more on that later. 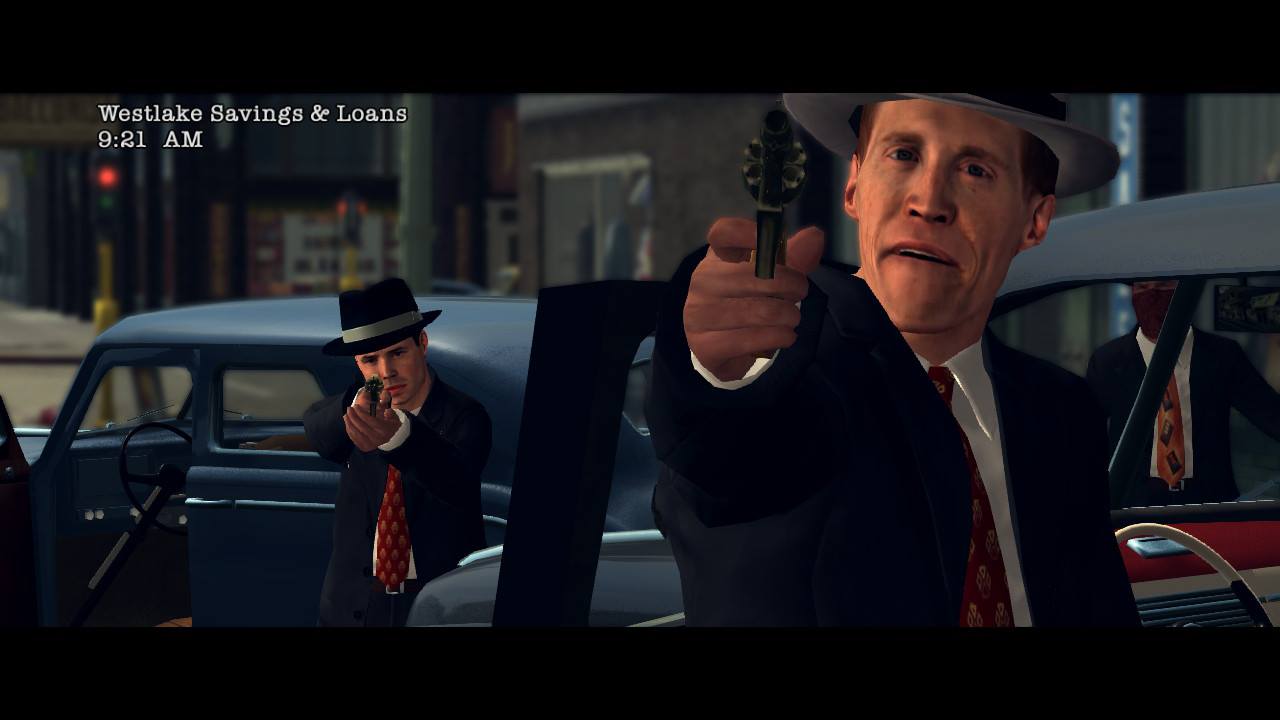 In LA Noire, players take on the role of Cole Phelps, a veteran who starts the game as a beat cop and slowly ascends the ranks with each newly solved case. The basic gameplay loop involves being assigned a case, heading out to your car, then driving through an open-world retro imagination of Los Angeles to the scene of the crime. Typically on the drive there will be a bit of banter between you and your partner, which drives character development (along with a series of flashbacks throughout the game).

Once you arrive, you’ll investigate the scene for clues which then get added to your notebook. Often there’s a nearby witness who you can question as well. As the cases grow in complexity, you’ll find yourself visiting multiple locations in your investigation along with encountering both additional witnesses and suspects. Of course, there’s also loads of action sprinkled in through car chases, fist fights, shoot outs, and more. 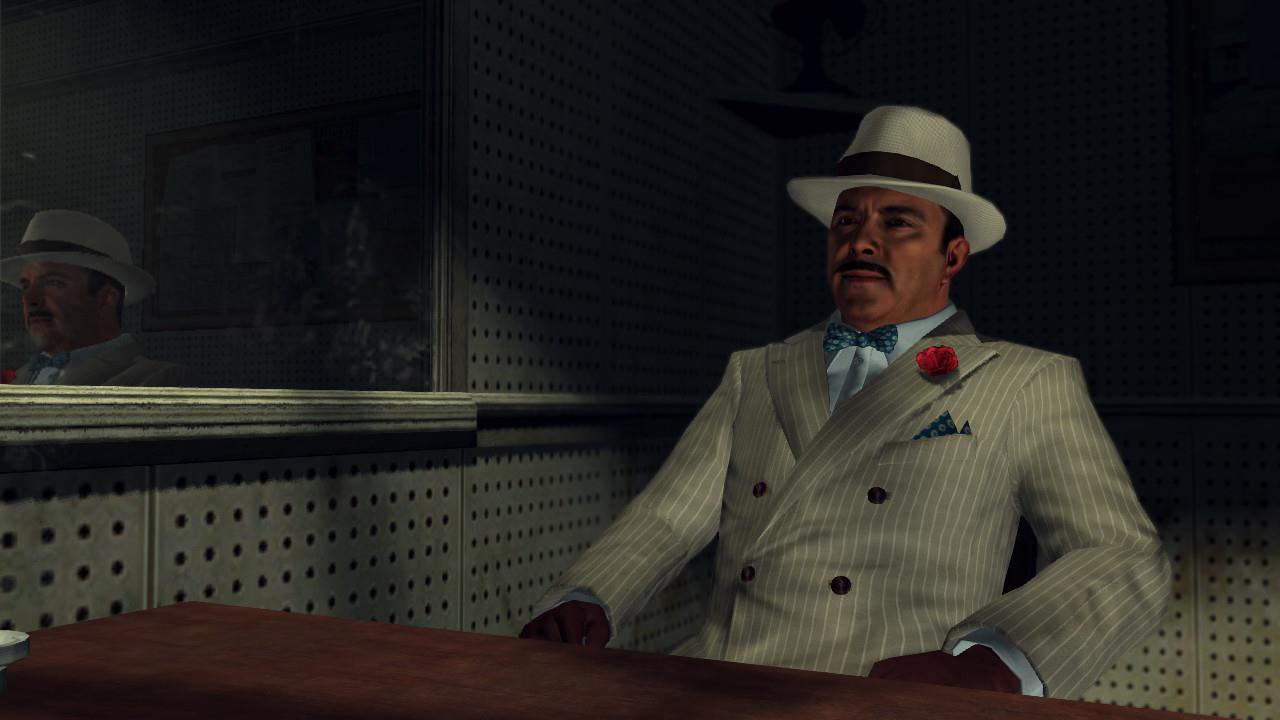 If you don’t feel like driving from place to place, you can fast travel by making your partner drive, but in doing so you’ll potentially miss side objectives which occur in the city. For instance, while driving you might get a call over the radio that there’s a burglary in progress, and you can elect to flip on your siren and apprehend the crook in question, or just ignore it entirely and focus on your investigation.

On paper, all these gameplay elements should go together into one really awesome crime game, but I still find the actual suspect/witness interview process to be frustrating. When you’re talking to someone, you have three options for how you respond: Good cop, bad cop, or accuse. This is updated from the original version of the game, where the choices were truth, doubt, and liar, in attempt to offer a bit more consistency in the way your character responds. If you believe what they’re saying, you’re supposed to be a “good cop," if you don’t, you’re supposed to be a “bad cop," and if you think they committed the crime you’re investigating you select “accuse" then refer back to your notebook to select the evidence you collected which contradicts their statement. 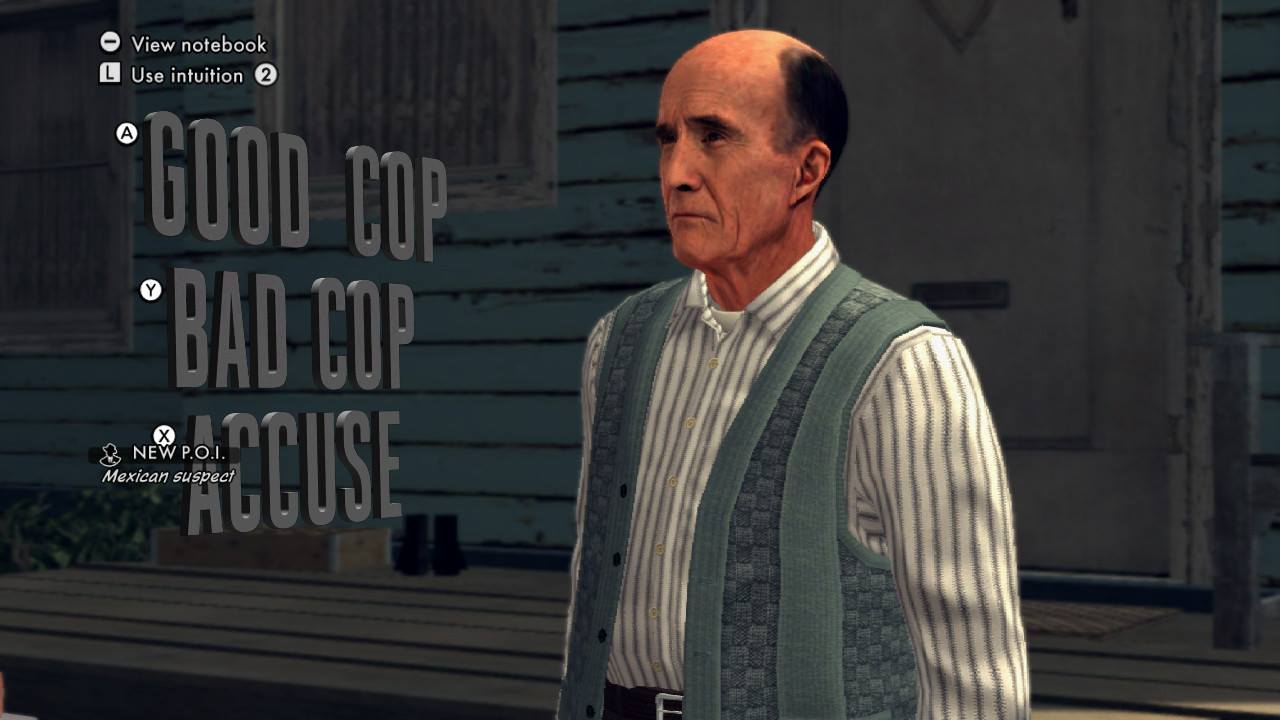 It sounds cool, but in practice you really have little indication of what your character is going to do with each selection, and I’m not sure if I’m just particularly terrible at reading body language but I always just felt like I was randomly guessing in these interrogation segments. Worse yet, the severity of the “bad cop" response is often absurd, as Detective Cole wildly flies off the handle.

A good example of this is a potential murder investigation early in the game. As part of the initial investigation you find some old glasses at the crime scene, then when you head to the victim’s house you find a glasses case that match the brand. While interviewing the wife, she mentions that the victim just got a new pair of glasses, which doesn’t really add up with the old glasses you found at the crime scene. 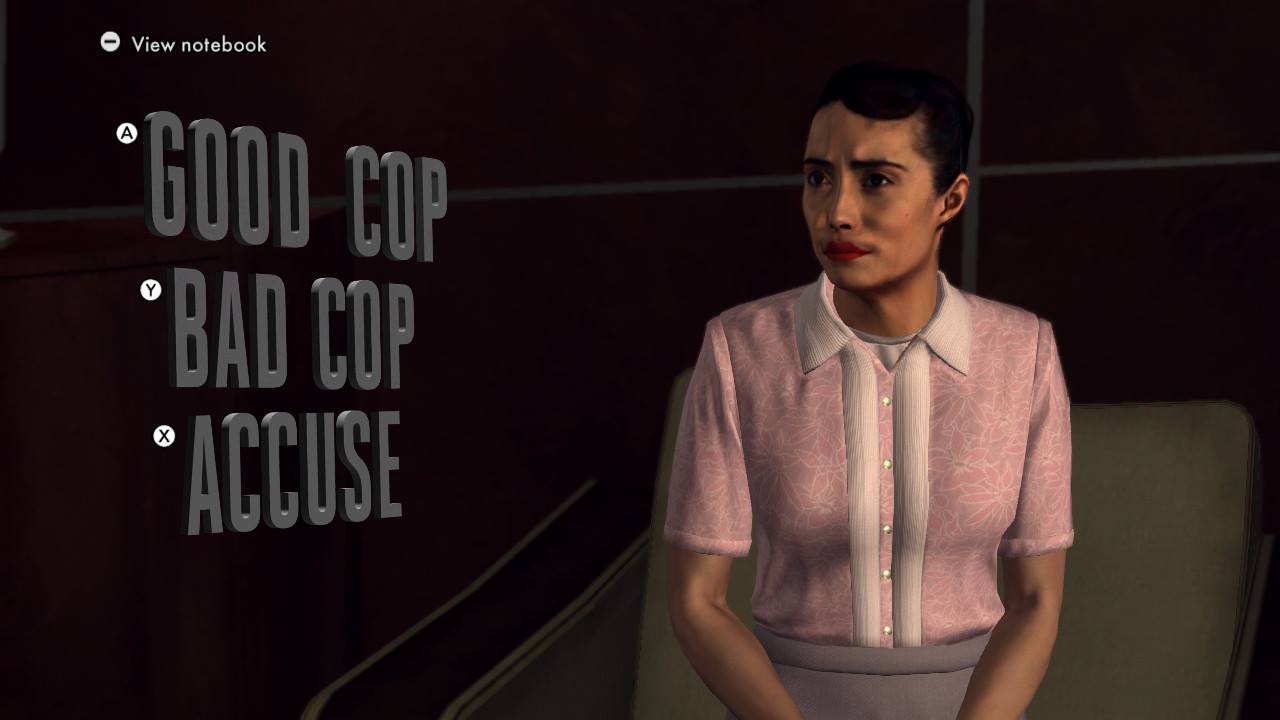 In this situation, straight up accusing the wife of murder seems odd, the “good cop" choice also seems weird because you’re noticing an inconsistency in the case, which lead me to selecting “bad cop" in hopes that Detective Cole would get deeper into asking why there were old glasses at the scene if the victim has new glasses. Instead, he just flies off the handle and suggests that the wife is behind her husband’s murder. These situations where you’re wrestling decisions and experiencing incredibly odd responses to witnesses is something you’re constantly wrestling with throughout the game.

The real problem is LA Noire does a very bad job explaining to the player that even if your bungle every human interaction, you can still make your way through the game. Instead, it marks the questions you selected incorrect choices on with an “X" as if you got them wrong, and you get fewer experience points. This was actually why I gave up on the Xbox 360 version of the game, as it really was giving me the impression I was somehow playing it wrong, or losing out on things, largely because I just couldn’t predict what sorts of crazy things my character was going to say when forced between three responses- Particularly in situations where none of them seem that great. 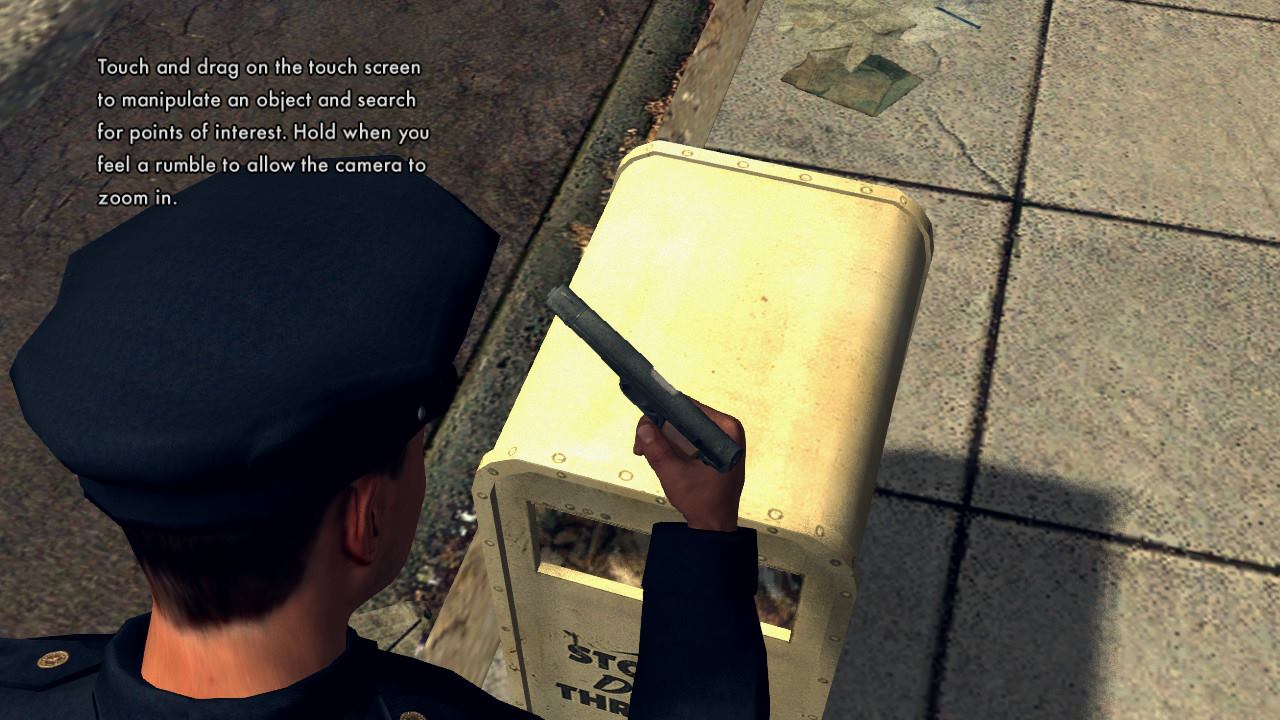 That being said, when you finally have your prime suspect in an interrogation room down at the station and the whole facial animation and questioning system comes together in a way that makes sense, it is really cool- Particularly as you’re chaining together all your evidence to finally get them to confess. When all these systems work, they work incredibly well, and almost make up for awkward moments like the one I mentioned before where you’re suddenly yelling at someone for seemingly no reason.

As far as the quality of the port is concerned, it seems like Rockstar put a ton of effort into making this a good Switch game. There’s many touchscreen elements (almost to the point that you wonder if this wasn’t originally meant to be an iOS port), the game loads nice and fast, and runs at a fantastic frame rate. It is a pretty massive game, however, requiring 28GB of storage space if you download it from the eShop- Making LA Noire the first digital game which absolutely requires a large microSD card to play.

Much like Skyrim, the instant-on nature of the Switch along with how loads of LA Noire can be played in tiny five to ten minute chunks, this is a fantastic title to play on the go. Of course, you can also just dock your Switch and power through the game on your TV just like the original LA Noire release.

While there’s absolutely no shortage of amazing Switch games that have been released this year, if you never played LA Noire, it’s a great addition to your library. The facial animation tech still looks amazing all these years later. Just remember that bumbling through interviews and interrogations isn’t that big of a deal, in the end you’ll get your man.