I just got finished playing around an hour or so of Ironhide’s Iron Marines ($2.99), and it’d be hard for my first impressions of the game to be any better. It’s from the developers of the Kingdom Rush (Free) series, so it’s not much of a surprise that they’d know how to make a really great mobile game. At its simplest, the easiest way to describe Iron Marines is that it’s pretty dang close to a mobile version of StarCraft. At times it even feels a little too on the nose when it comes to riffing directly from the Blizzard classic, but with a unique art style and a fascinating blend between tower defense and real time strategy mechanics, Iron Marines manages to feel distinctly different even if it is giving a unbelievably massive hat tip towards the StarCraft universe.

The whole game is controlled via a simple touch interface that works almost exactly as you’d expect it to. To select units, you tap them. To move units, you drag them in a way that feels a bit like playing Battleheart ($2.99). They’ll then make their way to that location, stop, and fire at anything within range. Additionally, on a lot of the maps you come across there will be points that you can install towers on, and those towers can then be upgraded a lot like a tower defense game.

Iron Marines’ tutorial leaves a little to be desired, so here’s a couple tips that I figured out while playing: To select multiple units to move them at the same time, double tap a grouping of units that are all standing near each other. This will allow you to then drag away from the grouping and move them all at once. There’s also a mini-tower drop gun thing that you can drop on the map which is on your toolbar of icons in the bottom right corner. If your units are getting overwhelmed, this can be a lifesaver. These two things really helped me with some levels I was having difficulty with.

Mission types, at least in the early game, feel just like something you’d come across playing the single player of StarCraft. You’ll do things like rescue marines, complete an entire map using just one hero character, build and defend multiple bases, and other things like that. The way you do all of these things have been distilled down to the genre’s most pure essence. For instance, you control a very small number of units at any one time. The maps I’ve come across so far have maxxed out at three units (with some units actually being a squad of three of those units) plus your hero character which is totally enough to have competent skirmishes without getting overly complicated and overloading what would be possible with the games’ touch control scheme. Also, so far, base building is limited to building towers on designated building points and coming across other bases you can take control of.

The enemies of the early game are very Zerg-like, and are a wide spread between enemies that do area effect damage, flying enemies, powerful siege units, and more. The variety is really quite impressive. Resource generation is constant, and it feels like you’re always juggling moving your soldiers around, upgrading things, and making sure all of your existing tower defenses are doing alright while managing the cooldown abilities of your hero character. It’s fascinating how Iron Marines simultaneously feels like a tower defense game and an RTS game without either element really feeling weaker than the other.

One thing I’m not super sure about just yet is how the difficulty curve of the game and the freemium elements all come into play. The fourth level felt artificially difficult to me at first, but I’m still not sure if I just needed to play the game better, use a different strategy, or what. I breezed through the first three levels then hit a wall for a while. I eventually got through the level without paying, but I really couldn’t tell you if it was my skill level that’s the problem, something I was supposed to be doing that I wasn’t because there isn’t much of a tutorial, or what. There’s also optional missions which were also very difficult for me, but perhaps you’re supposed to go back to them after upgrading your hero a few times. 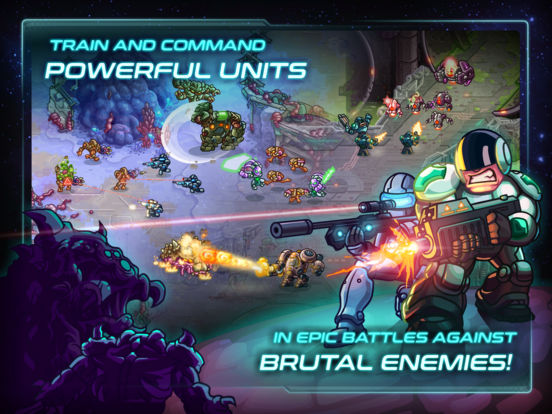 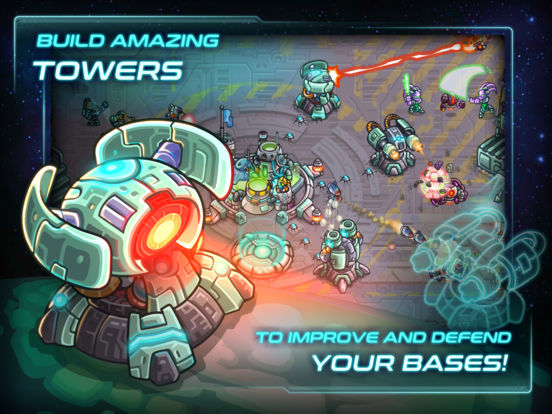 As far as things you can buy in the game, there’s three hero units you can choose from for free, and six more you can buy. The cheapest unlockable hero is $2.99 while the most expensive is $6.99. (I haven’t dumped any money into the game yet to see if there’s a wide disparity in power levels between these units.) Each of these units have three abilities that you can upgrade via spending “Hero Points" which you get from playing the game. From there you can also buy “credits" and “techpoints." Credits buy you additional weapons that basically serve as consumable power-ups while techpoints unlock persistent upgrades from a massive tech tree. Both currencies are rewarded at a decent clip while playing, and you can get credits by watching ads if that’s something you’re into.

Overall, my early impressions are super positive and I’m excited to get deeper into the game to answer questions like whether or not any of the “premium" heroes are required, and if the game is balanced in a way that you can just play through it without really dealing with any freemium shenanigans if you wanted to. I suspect there will be some kind of freemium pinch point eventually, but when it hits, I couldn’t tell you just yet. Even if it does, tossing the developers of a game of this level of quality a couple bucks wouldn’t be the worst thing in the world.

Folks in our forums are going wild over the game, and it’s easy to see why: With the caveat of that I’ve only played for around an hour, Iron Marines is one hell of a game.