Spending hours compiling the list of 32-bit games that are set to die with iOS 11 was an immensely difficult task, not simply because of the sheer number of games, but also because of the fond memories I have of so many of the titles that are sadly facing the chop next month. While there are a number of games that I could single out, and many that I intend to put a spotlight on in the coming weeks, Dungeon Raid ($0.99) remains the most prominent example of a pivotal and influential App Store release that will be disappearing when the 32-bit Appocalypse comes around. Beloved by the iOS gaming community, critics and casual iPhone users alike, Fireflame Games’ App Store debut was a slick, detailed and impossibly irresistible puzzle RPG amalgam. Even though it originally released in 2011, Dungeon Raid remains as fun and as playable today. However, despite over six years since its emergence on the App Store, very few mobile puzzle games have managed to replicate the compelling formula that Dungeon Raid perfected, and it’ll be incredibly sad to see it fade into obscurity. 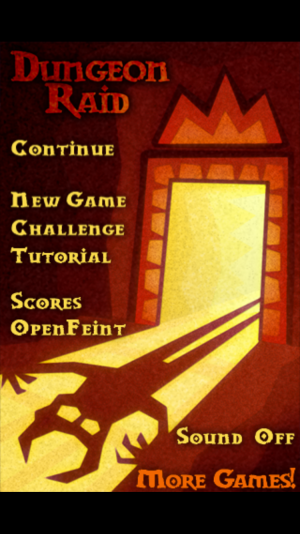 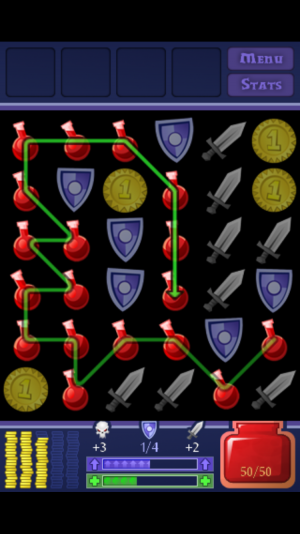 On the surface, Dungeon Raid may appear be somewhat derivative of both the many puzzle RPG titles that came before it, and the ones that have emerged in vast numbers since its heyday in 2011. There are only four key tiles to be matched in Dungeon Raid, with swords, which must be linked together to eradicate skull icons, alongside defence-building shields and HP restoring potions. However, it’s this simplicity and accessibility that makes Dungeon Raid so appealing, and the way Fireflame Games manages to add numerous layers of depth without deviating from this core formula enables some incredibly guilt-inducing multiple-hour playthroughs in attempting to beat your last high score. Attempting to manage the board to prepare for imminent boss fights that can appear at any moment and quickly result in your protagonist’s demise, all the while trying to link together as many shields and coins to bolster your equipment and level up your weaponry, is a precarious balance to strike, and 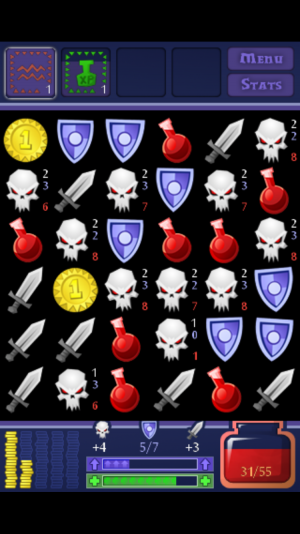 remains a perpetual task as the randomly generated tiles constantly emerge in unpredictable patterns. Managing to slay a particularly nefarious beast while the pounding of your knight’s heart-beat emphasises how close you are to death is an exhilarating feeling, and turns a relatively basic puzzle game into a truly epic adventure.

Beyond the core matching mechanics, the developers also added in a number of features that result in every run being a wildly different experience. At each new level, upgrades and special powers can be chosen, resulting in things such as collecting all health potions as experience, turning one random column into swords, or doubling all coins collected the next turn. With rather lengthy cooldowns, these powers aren’t able to be abused, but in a pinch can be the difference between life and death. By limiting the amount of powers to a maximum of four, you are forced to choose whether to accept or ignore a certain ability at each level up, perhaps in the hope that a better alternative will appear at the next time of asking. Not choosing to load up on abilities can be a huge gamble, and it’s this element of risk that makes Dungeon Raid unputdownable, as you excitedly wait to see what the next level or the next boss may bring.

Dungeon Raid also had a class system that was implemented in an update shortly after its release, with roles such as Ranger, Mage, Assassin and more available to be unlocked through multiple plays. These all have perks, flaws, and special qualities based on their race and exclusive skills that give a unique spin on the core gameplay in Dungeon Raid. However, it’s the unlock and levelling system for these 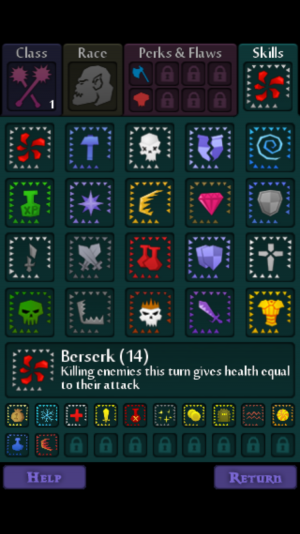 additional classes that strangely appealed to me most back in 2011. To unlock new races, you must play as the default Adventurer class, who has no special abilities of note. By playing on a difficulty above Easy, every boss slain as the Adventurer has a chance of rewarding a trophy, and from this a brand new class. Likewise, play as one of the unlocked races and each trophy will level up that specific load-out. It’s a pretty eccentric and confusing way of unlocking new abilities, especially in a game that champions its accessibility above all else, but such a system results in each boss fight being incredibly exciting in the hope of a new trophy drop. There’s even a special ability that spawns bosses on the board, which can be used to attempt to farm these new class trophies, which adds a whole new level of risk that I found unfathomably absorbing when the game first launched.

All these different features result in what is one of my favourite App Store puzzle games I’ve experienced in the almost ten years of the platform’s existence, and revisiting the title for this feature has brought back a ton of extremely fond memories of playing Dungeon Raid when I was younger. One particularly fond anecdote that came to mind recently was shortly after the game released, I was going to London with my family to see Arsenal play a football match (or a soccer match for those across the pond). While I can’t remember anything about the result of the game, I can recall playing Dungeon Raid in the car, on the train, while waiting for the game to start, and even while waiting for my dad to go to the bathroom. Fast forward six years to last weekend – I’m now technically an ‘adult’, and on a three hour train ride to see my friends in the north of England. Before I know it, I’ve arrived in Leicester, my phone battery is precariously low, and I’ve spent the entirety of the journey completely hooked on Dungeon Raid again. It’s stories such as these that emphasise how Dungeon Raid is perhaps one of the most tragic examples of a game that will disappear from the App Store during the 32-bit Appocalypse. Not only does it run perfectly, but – outside of the lack of optimisation for newer iOS devices – it hasn’t aged a day.

Other games have tried to emulate the success of Dungeon Raid, with spiritual successors and borderline clones like Darkin (which has coincidentally also departed the App Store) and Dungeon Tiles (Free) offering up enjoyable experiences, but failing to capture the magic that Fireflame Games conjured up back in 2011. It may be an entirely different genre, but the closest I’ve seen to a 64-bit equivalent to Dungeon Raid is probably Solitairica ($3.99), as its accessible combat mechanics, multiple different classes and close brushes with death create the same feelings of constant excitement amidst deceptive levels of depth that endeared me to Dungeon Raid so much back in the day. It will be sad to see the game disappear from the App Store, but with no sign from the developer of a future iOS 11 compatibility update, it appears Dungeon Raid is about to lose the last of its nine lives when the 32-bit Appocalypse comes around. While you still have the chance, I’d highly recommend revisiting Dungeon Raid, or even checking it out for a measly dollar if you’d like to experience a key release of the formative years of the App Store.