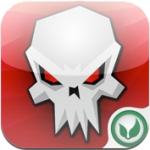 This is a little odd, as we’ve already posted about the latest update to Dungeon Raid [$2.99]. It’s standard for us to post about substantial updates to games like Dungeon Raid which we loved in our review, but it wasn’t immediately apparent just how much better the game got until we spent the following weeks playing it because so much of what was added involved playing the game lots. We thought “Oh hey, cool, an update to one of our favorite games," posted the changes, and went on about our day.

The biggest change to Dungeon Raid came from the unlockable classes and associated races. Playing as a standard adventurer in normal (or harder) difficulty can randomly result in a special skull dropping a trophy, which then unlocks one of the included classes. Similarly, playing as a class and collecting a trophy levels up that class. Since these drops are completely random, it takes playing quite a while to actually unlock (or level up) anything.

Each class and race has its own special ability, which can substantially change both how you play the game as well as your strategy for upgrading as you level up. Since it will take quite a while to unlock everything, here is the list of classes, associated races, and what each of them do to look forward to:

Raider: Unique skill is Masochism (15) – converts all coins into skulls. This is better than it sounds!
Perk – 100% bonus chance for tracing 10+ tiles
Flaw – Matching only 3 tiles gives you nothing.
Race – Halfling, with Guts (+1 to max armor when you kill at least 15 enemies in one attack), and the mortal enemy Invisible, which causes other monsters to appear with double armor while its alive.

Priest: Unique skill is Wish – single-use skill. Collect all tiles.
Perk – Double effect from regeneration upgrades
Flaw – -20% armour piercing
Race – Faun, with Rejuvenate (HP restored to 25% on level up if it’s currently lower than 25%) and the mortal enemy Assassin, which will automatically move down 1 tile each turn.

Barbarian: Unique skill is Berserk (14) – Killing enemies this turn gives health equal to their attack
Perk – +1 base damage
Flaw – -10% bonus shield chance
Race – Orc, with Stun (10% chance of freezing an attacked enemy) and the mortal enemy Corrosive, which reduces your armor to 0 when it first appears.

Mage: Unique skill is Rune (12) – If you trace a closed path this turn, you collect all tiles inside it
Perk – 5% of potions are mana potions (reduce the cooldown of abilities by one turn per potion)
Flaw – -10 max health
Race – Changeling, with Shapeshift (killing a special enemy refills one of your skills (possibly an already full one), and mortal enemy Unstable (teleports you into a room with enemies and no swords)

Rogue: Unique skillis Greed (25) – Kill every enemy positioned next to a coin.
Perk – 10% bonus gold
Flaw – 3% of shields are broken and don’t give any benefit.
Race – Sauren, with Search (double the chance of getting a scroll in the item shop) and the mortal enemy Thief, which damages you by double its attack value if it steals gold from your inventory.

Paladin: Unique skill is Last Stand (35) – Refill health completely if you are killed this turn
Perk – Mortal enemy only appears half the time
Flaw – Special monsters appear 1 turn earlier
Race – Dragonkin, with Fire Breath (Ignite a random enemy every time you use a skill (deals base damage at end of turn)), and mortal enemy Freezing (your base damage is halved while this enemy’s alive)

Warrior: Unique skill is Charge (18) – collect all tiles around the edge of the board.
Perk – +10 max health
Flaw – Special monsters have +5% max health
Race – Dwarf, with Uppercut (+ damage to enemies swiped upwards, from the tile below to the tile above), and the mortal enemy Chaotic, who can only be damaged by an uppercut.

Assassin: Unique skill is Haste (16) – Creates a chain tile, which allows you to match 2 different tile types.
Perk – -1 cooldown for the 4th skill chosen.
Flaw – all enemies have +1 health
Race – Werewolf, with Cripple (enemies with less HP than armour die at the end of the turn) and the mortal enemy Vampire, which can gain health above its starting health.

If you haven’t already, at least check out our review or give Dungeon Raid Lite [Free] a try. Dungeon Raid has become my default “Hey I’ve got a minute let’s play something!" game, and it has similarly absorbed everyone who has seen me playing it. This latest update masterfully combines long-term goals to the game which previously only had short-term session-based goals, giving me the drive to play it even more. Seriously, get it.

Also, massive thanks to LittleCat for compiling this list of classes as I’ve been playing this game non-stop and still don’t have everything unlocked.